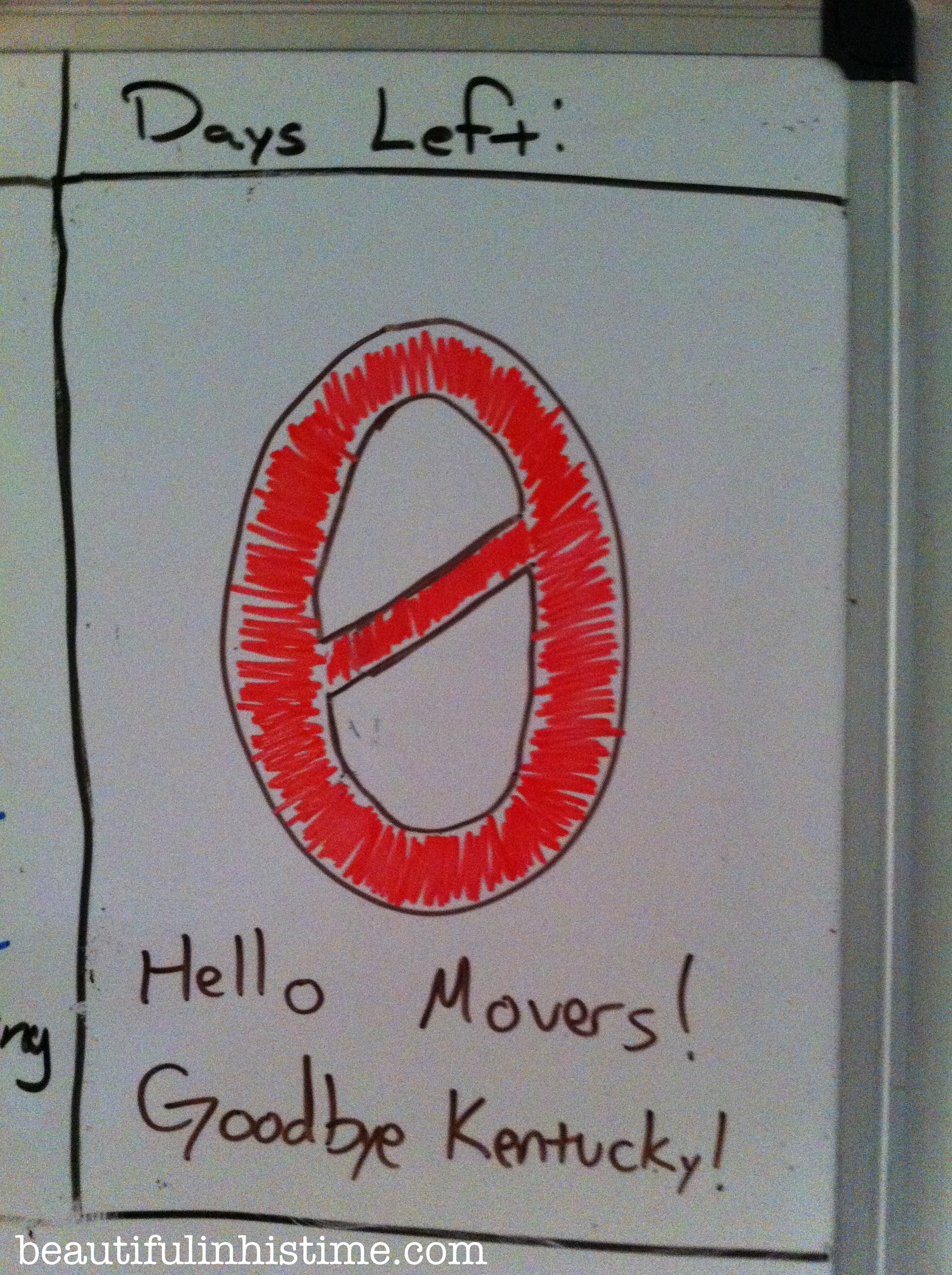 Moving Day 1 dawned lovely, warm, and sunny. We woke up around 6am because the movers had said they would be there between 8 and 9 am. I was scurrying around trying to stuff all of our “do not pack” items into a closet so they wouldn’t get packed by the packers.

When the Army pays to move you from one location to another, you really have it easy. You don’t have to pack your boxes or worry about boxes falling off of the dolly. They do everything. The only thing you have to worry about is them packing stuff that you need to take with you.

The moving process takes place in two days. The first day, they come and pack all your stuff in boxes. They invade with stacks of flat boxes, boxes of tape, and packing paper. They descend with force and fury and by the end of the day, your house resembles an ancient city…made of towers of big heavy boxes.

Good Army movers are always late. The really good ones at least call and tell you that they are going to be late, at which point you take a deep breath, calm you racing heart, and realize that you have all the time in the world.

It had been a really exciting weekend for our street. The house across the street had been destroyed by a fire while we were out of town, and they chose this weekend to work on the demolition. That meant that the street had been busy with trucks hauling equipment, the “digger,” and trash dumpsters getting hauled away over time.

This morning was no exception. They were finishing up the hauling away of trash…when one of the last trucks-hauling-a-dumpster-away got stuck.

I received a knock at the door somewhere around 10am. A man in reflective gear asked me if they could use my driveway to use another truck to pull the truck-hauling-a-dumpster out of where it was stuck. I looked at the man blankly then tried to stumble through an explanation that there was going to be a moving truck coming soon, any minute really.

It will only take five minutes!

A half hour or so went by before they were finally hooked up and ready to un-stuck the truck. They had just hooked things up when we received the phone call from the movers that their semi-truck was in our neighborhood.

Russ ran down to the end of the street to explain to the movers what was going on. I stayed behind and took pictures of the mayhem-that-was-our-driveway. 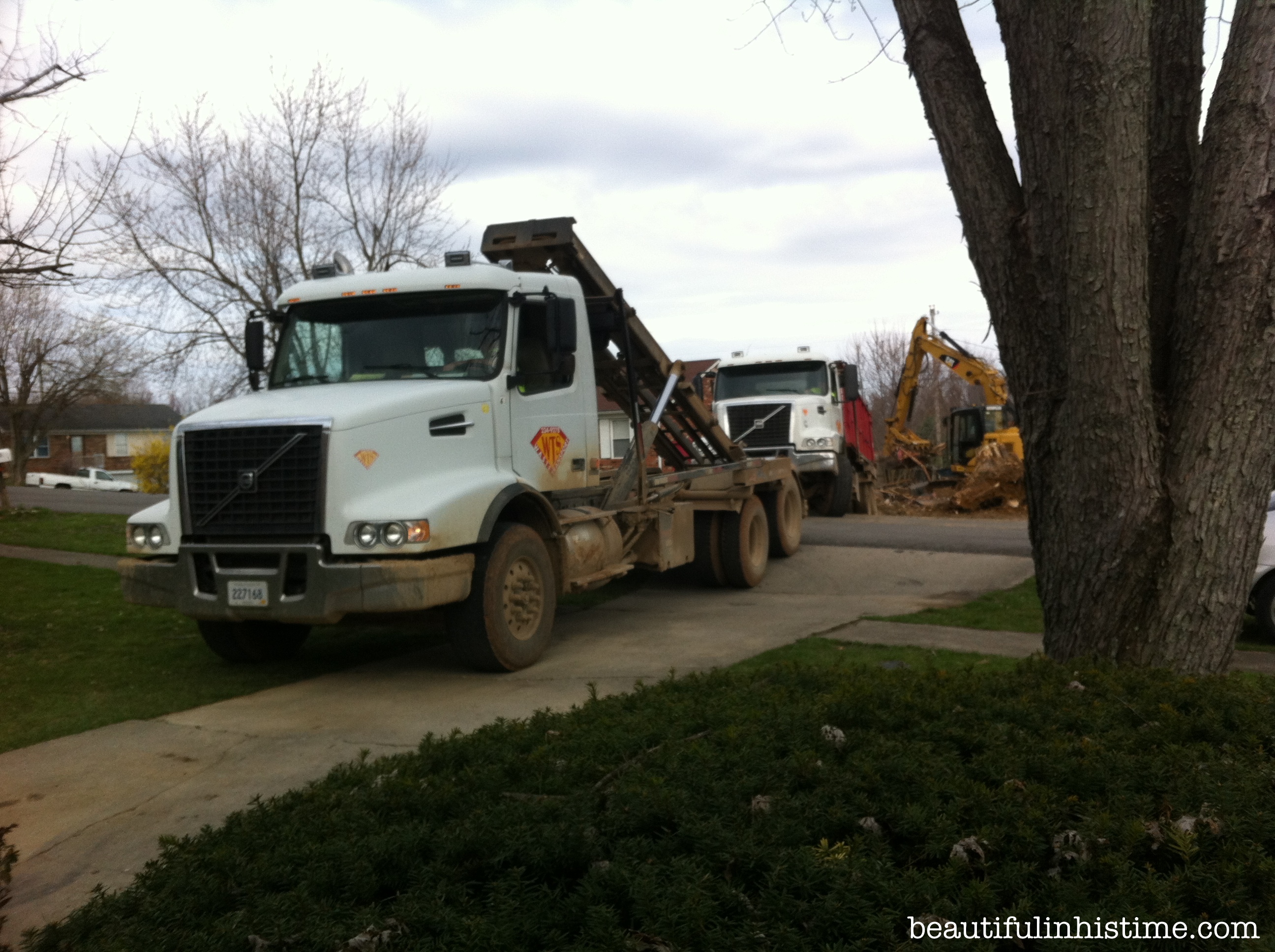 The process really only did take five minutes, but it definitely was a strange start to the morning.

Otherwise, the day went rather smoothly.

The movers, Russ, and Ezra ate lots of pizza. 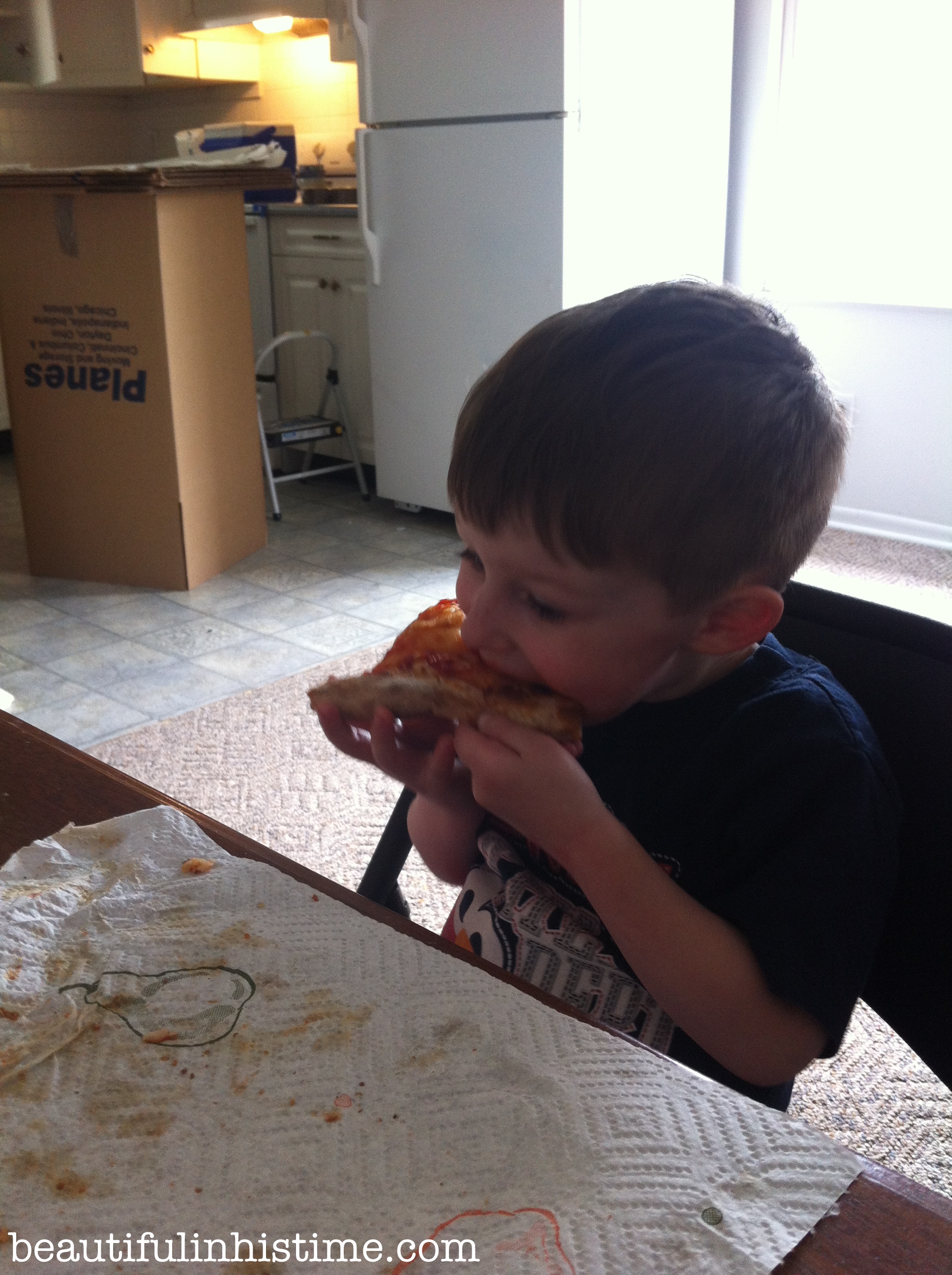 Everything got packed and I got some cleaning done with the help of my friend Brandy. The packers left around 4 or so, after which I got a hot shower and plopped down on the couch next to my husband. We were both looking forward to bedtime, but had a few things left to do that evening.

Ezra enjoyed having an empty bookcase to play in: 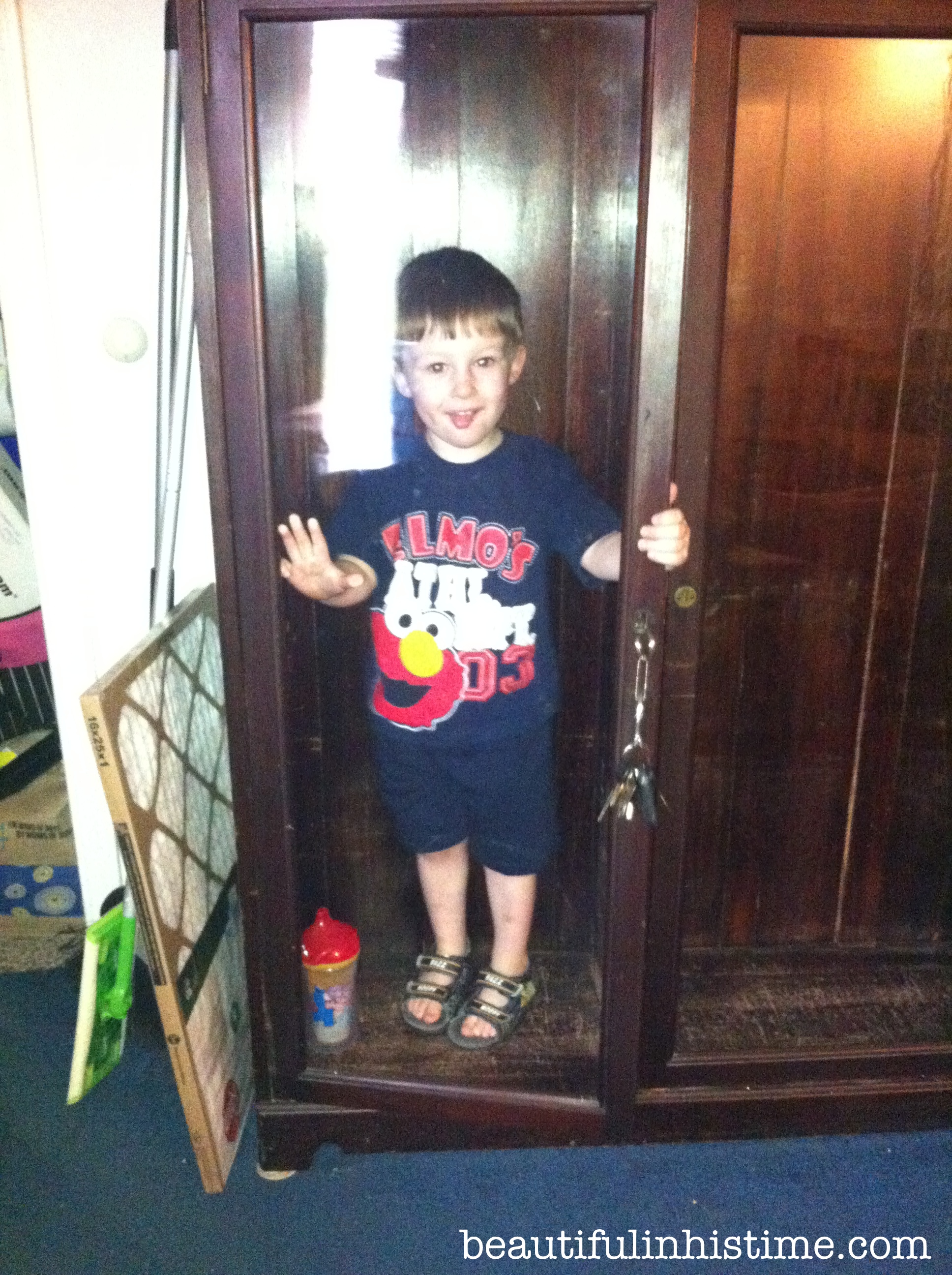 We stopped by at our friend Dorothy’s house. My friendship with Dorothy is a pretty amazing story. We met online on a forum for Army Wives in the early spring of 2009, when I was still living in Texas. We knew that we were going to be PCSing to Kentucky, and I had been asking around on the forums about Fort Knox. She had responded with information about the area, and even led me to the website where we ended up finding our home listed. Once we moved to Kentucky in the fall of 2009, we met up in real life at a gathering for Christian military wives that I had hosted at my home. She had just had a little boy and brought along one of her little girls. I never dreamed about where the next three years would take us.

I started teaching her two girls piano lessons the following summer while I was pregnant with Ezra. We continued getting together often for coffee dates and she was always available for questions and advice during my pregnancy and recovery.

As Ezra grew bigger, Dorothy became our favorite baby-sitter for things like chiropractic appointments and haircuts (and sanity breaks). We got very comfortable together. Dorothy and her husband had me over for dinner a few times when Russ was deployed. Dorothy also was responsible for inviting me to the Fort Knox PWOC Conference in the spring of 2011 that was instrumental in leading me to attend PWOC in the first place.

Once Ezra got old enough to interfere with my teaching piano, we worked out an arrangement whereby we had lessons at Dorothy’s house and she would watch Ezra in the basement while I taught upstairs. Ezra and Dorothy’s son are only a year apart so they became good friends and we enjoyed many playdates together. 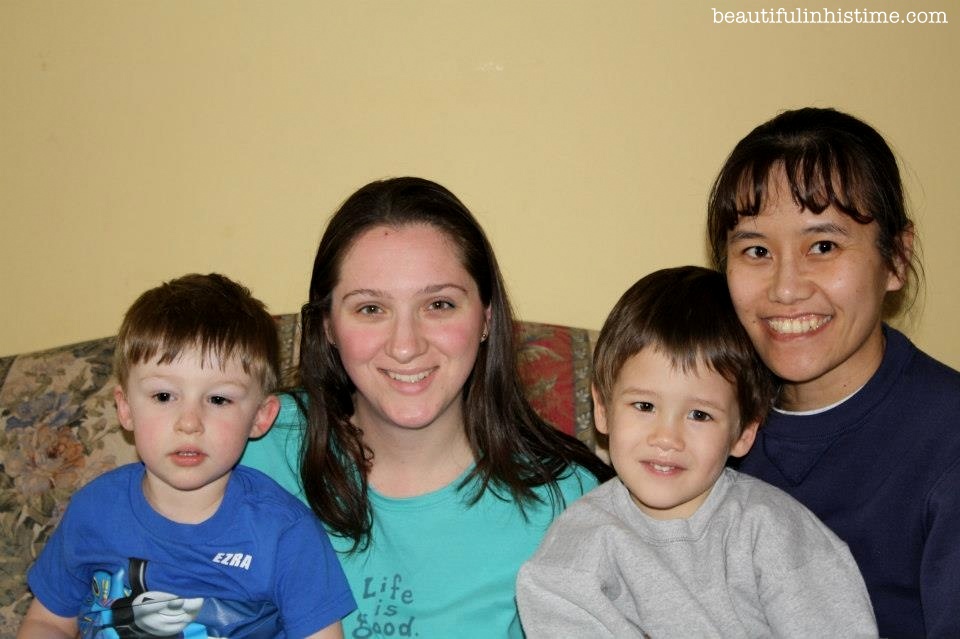 It was such a blessing to have such amazing friends and to watch each other’s kids grow up. Seeing the girls improve in piano by leaps and bounds (especially during the last few months of lessons) put a huge smile on my face so many times. It worked out perfectly that both girls were finishing up their current level during our last month of lessons. Dorothy’s older daughter was onto playing scales and on our last lesson played her first Hanon exercise! I was so proud! 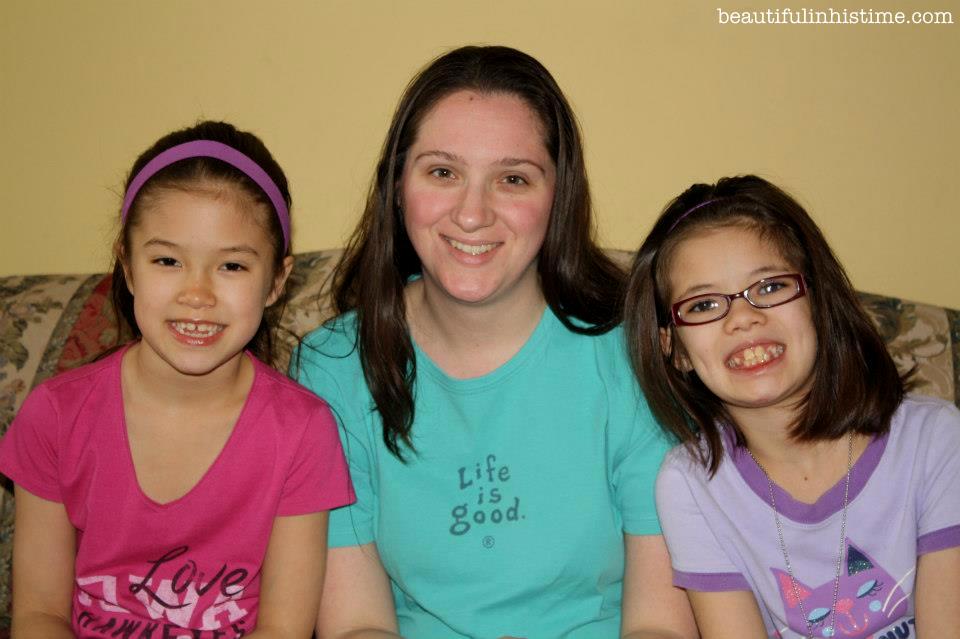 After saying our goodbyes to Dorothy and her kids, we headed to say goodbye to our favorite midwestern restaurant, Bob Evans. We had no food left in the house nor dishes and utensils to cook with, and Russ needed to have his favorite salad one more time. 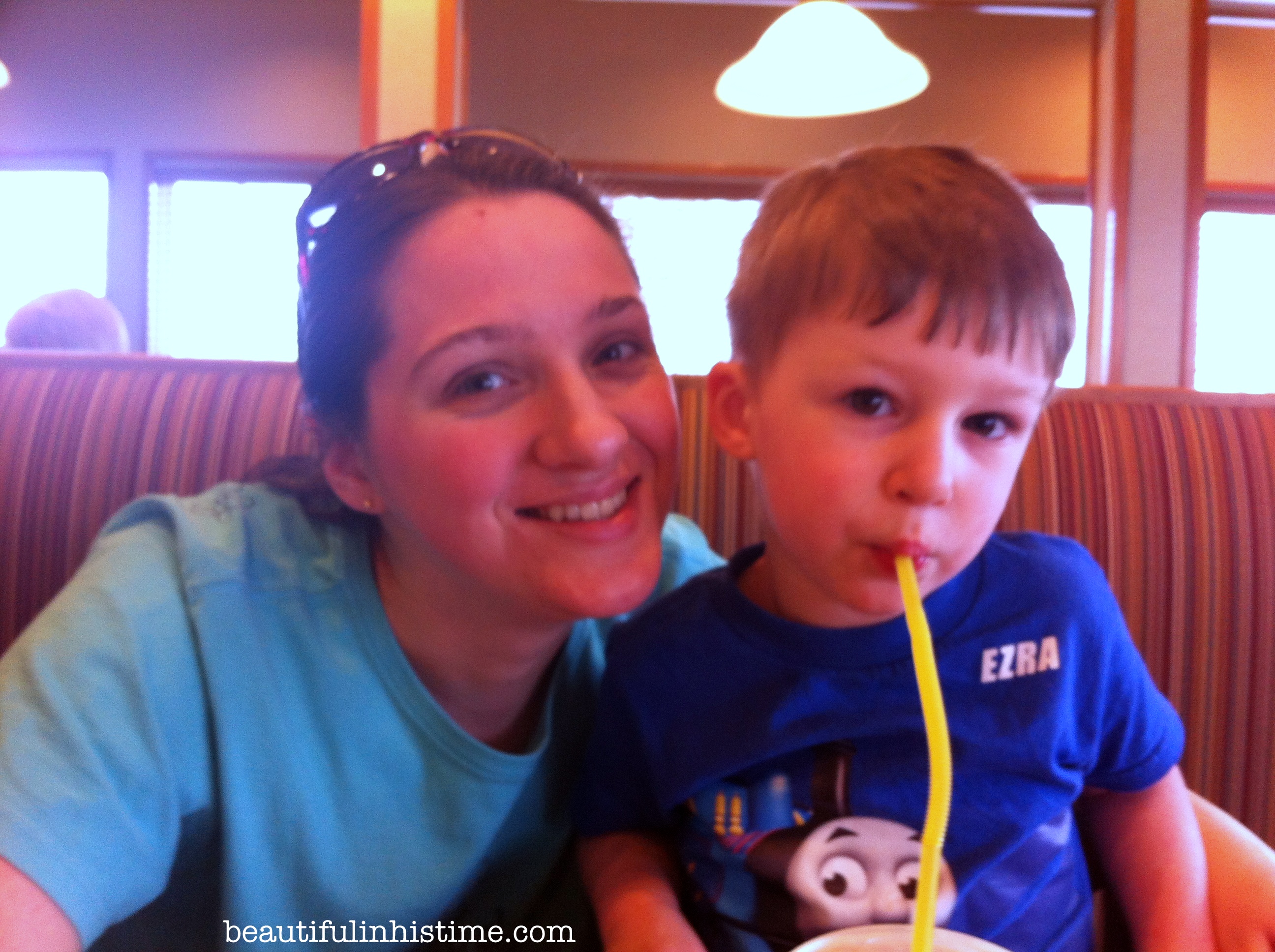 We ended the day going to our church Life Group one last time, then collapsed into bed.

The next morning was also beautiful and sunny. The men started with the loading, and I worked on cleaning.

We quickly realized that Ezra was going to be getting in the way of the boxes, so we sent him to a baby-sitters for some peace of mind – but not before letting him play in the truck a big first: 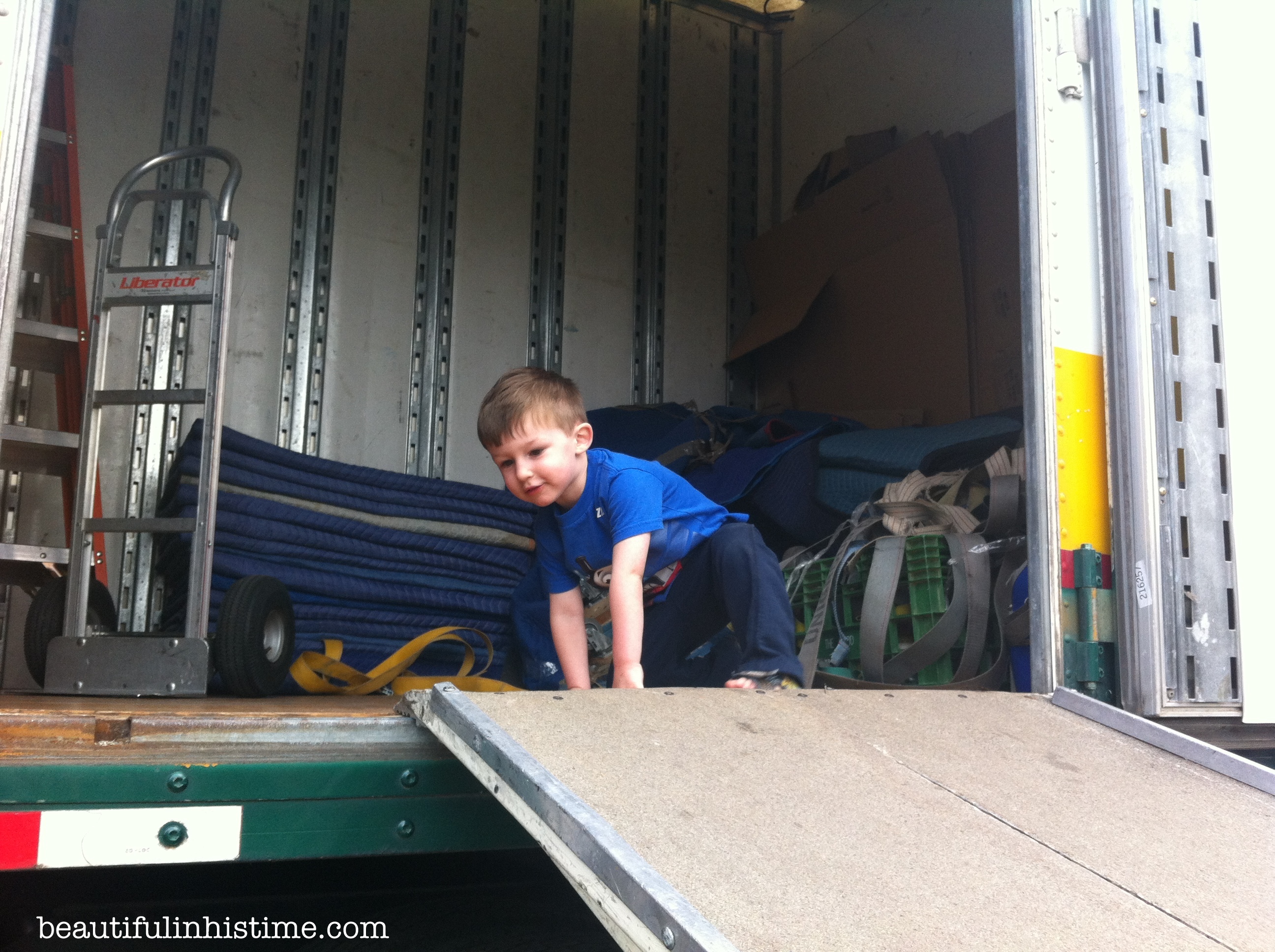 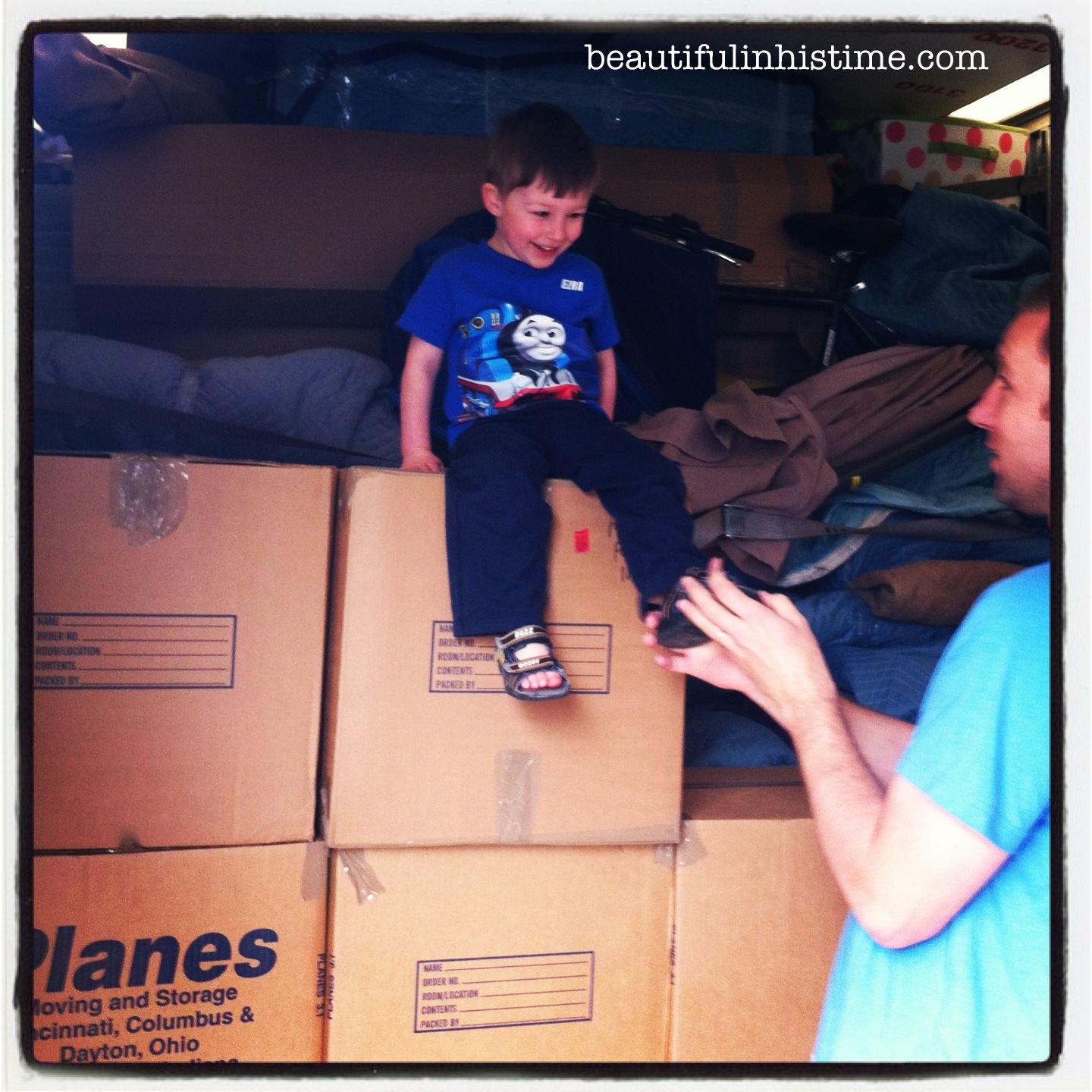 Lest you think we have a ton of stuff, this truck actually housed the household goods of three families–ours was the last to get loaded on the truck. 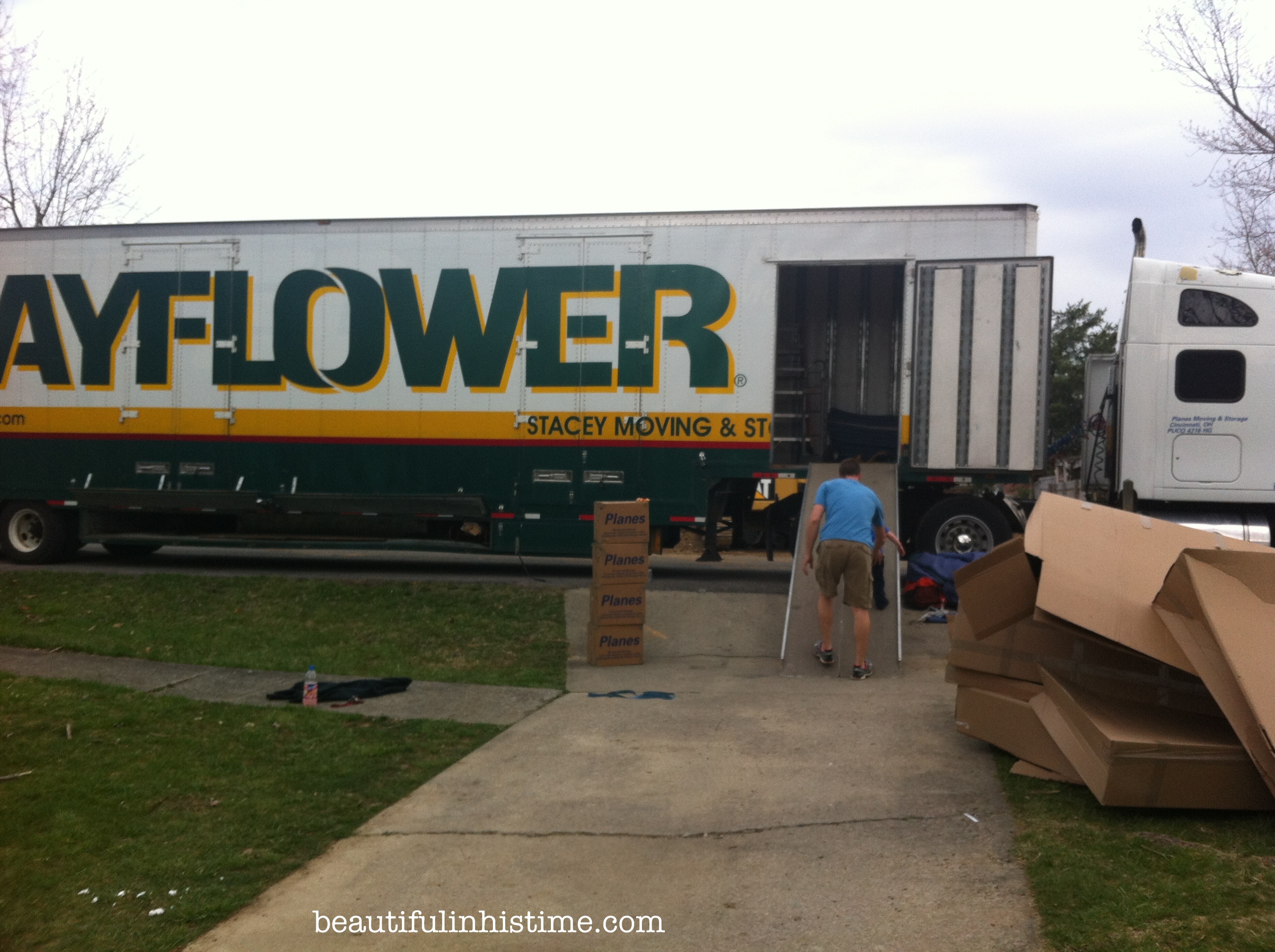 Warm sunny days make cleaning out the fridge so much easier–with the HOSE! 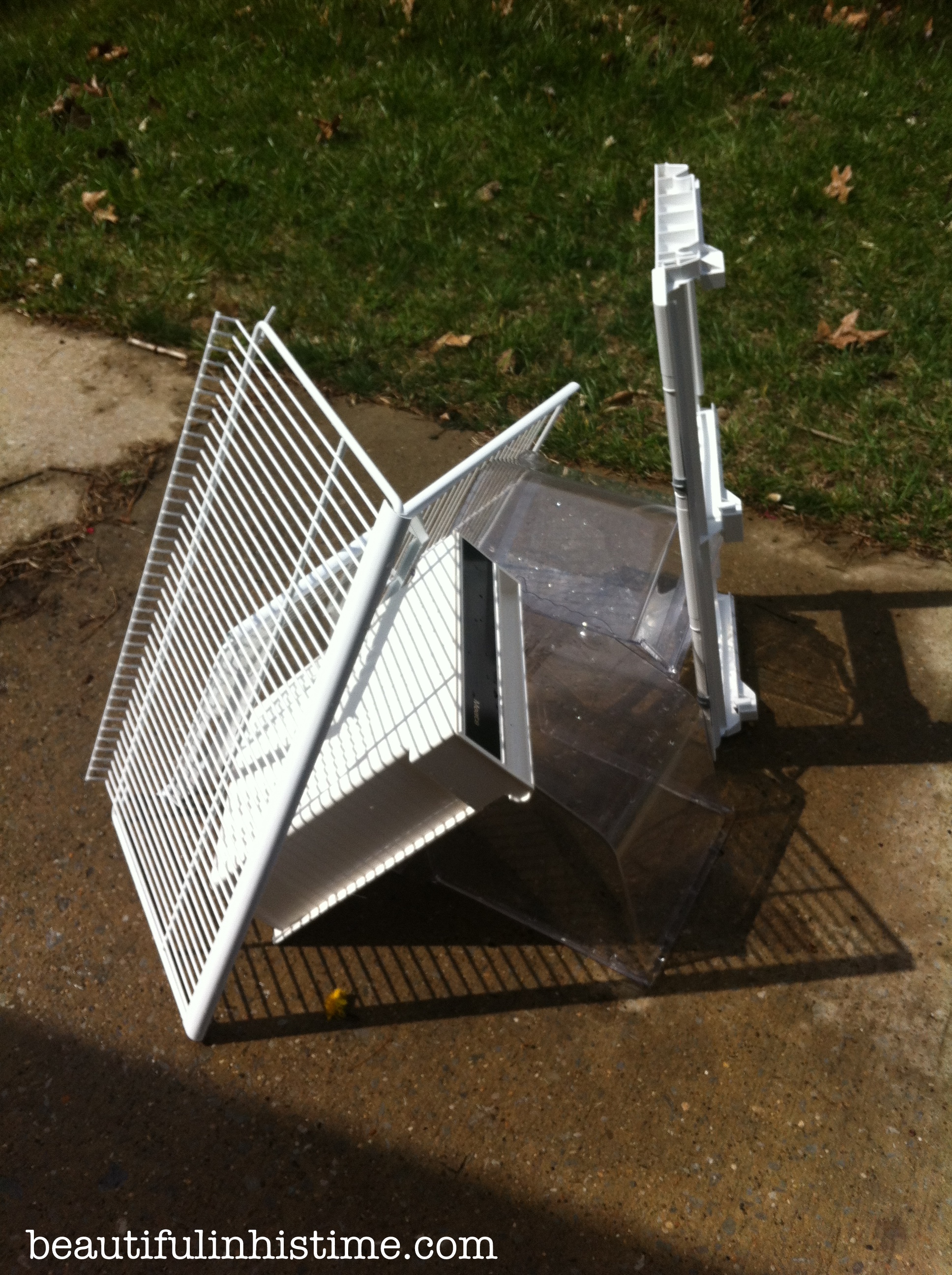 While moving the fridge for cleaning, I also found our long-lost Baby Jesus: 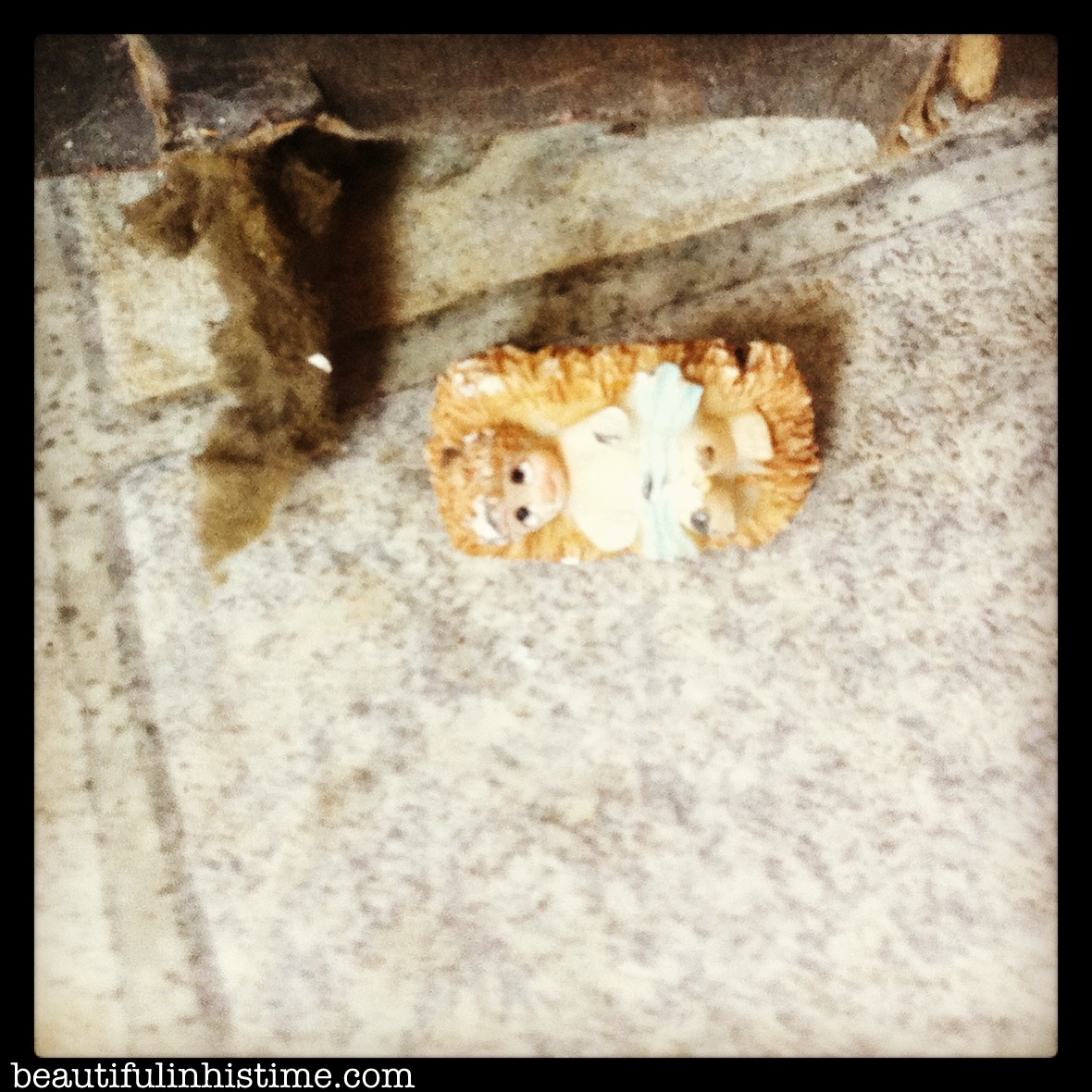 Normally I clean with vinegar, water, and lemon juice and avoid harsh chemicals, but while we were cleaning the house for our move, I fully embraced whatever cancer-causing-horrors are in magic erasers because of how amazingly they cleaned the spots off of my walls!

(P.S. I don’t want to see a magic eraser again for a very long time…) 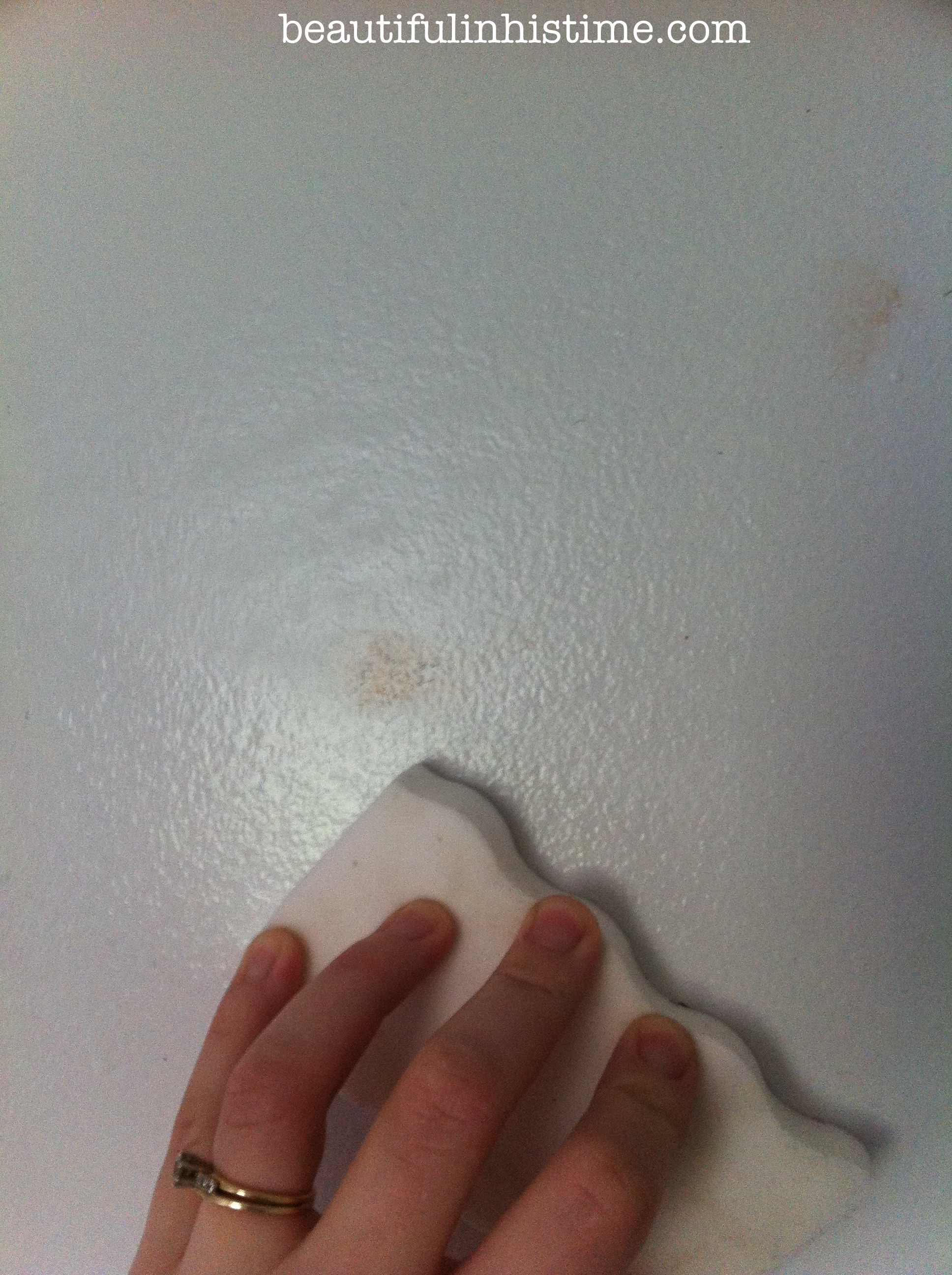 The movers were done and gone by about 2, when we had our landlord over to inspect the house so we could turn in our keys. Ezra hadn’t napped and while I was holding him while talking to our landlord, he fell asleep in my arms, and actually stayed asleep when I laid him down on the empty floor!!! 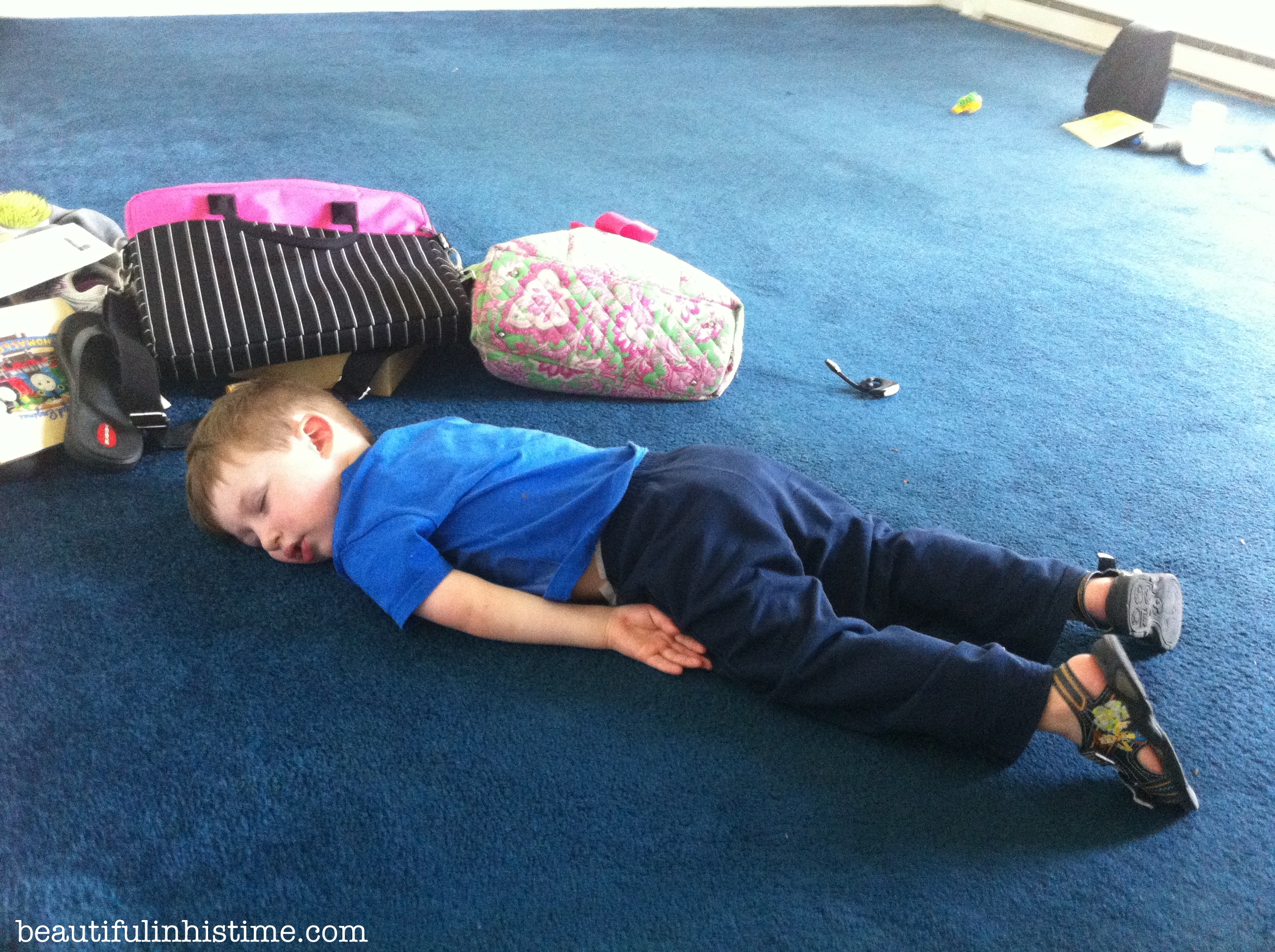 Tomorrow I will be posting about saying our goodbyes to our house and leaving Kentucky for good.