You probably wouldn’t ever say those words, but you know what I’m talking about.

You aren’t quite sure how to identify it, but you feel it.

When your friend announces she’s switching to cloth diapers, entering a 5K, planning a home birth, sending off a book proposal, going gluten free, planning to adopt, having her 11th child, reorganizing her house with a new organizational method she read about in a book, devoting herself to a new volunteer organization, sponsoring a foreign child, going back to work full-time, redecorating her entire house with ideas she found on Pinterest, or deciding to homeschool.

You feel the twinge when someone decides to do something that you haven’t done, didn’t do, can’t do, or don’t want to do.

Sometimes the twinge feels like guilt. You feel that their choice to do xyz somehow invalidates your choice to NOT do xyz, or to do abc instead. Your brain for the briefest instant says, “She is doing xyz and it’s working for her, but I didn’t do xyz. Therefore I must be doing it wrong. I should be doing xyz.” You imagine that she is judging you and everyone else who hasn’t chosen xyz. You imagine that she thinks you are lazy, uneducated, don’t care about your kids, or not surrendered to God.

But then your guilt turns into self defense: Your brain skips ahead to list all of the reasons why you chose abc, why xyz wouldn’t work for you, why you can’t do xyz. You puff yourself up in your own decisions and remind yourself why your decisions were right and good (and sometimes, even better than the ones that she made).

Sometimes, you even go on in your brain to vilify xyz and the friend who made such a decision for her family. You list all of the reasons why xyz is ridiculous, or assume that she is simply judgmental, proud, or pushy about her choices.

You justify yourself with righteous indignation.

You get angry and hurt. You may even fight back with a comment in response about why xyz doesn’t work for everyone. You may get on your own personal Facebook page or blog and promote your own not-choosing-xyz-and-this-is-why or abc-is-the-best.

There has been so much to be said in the blogosphere about the danger of comparison, mommy-guilt, and how “mommy wars” are started because we compare ourselves to others. But what I’m talking about here goes far deeper than simple comparison or guilt.

I’m talking about a lack of personal, internal self-control.

In the hallway of the building where I saw a family therapist on Fort Knox there was a motivational poster with the following quote by Eleanor Roosevelt: 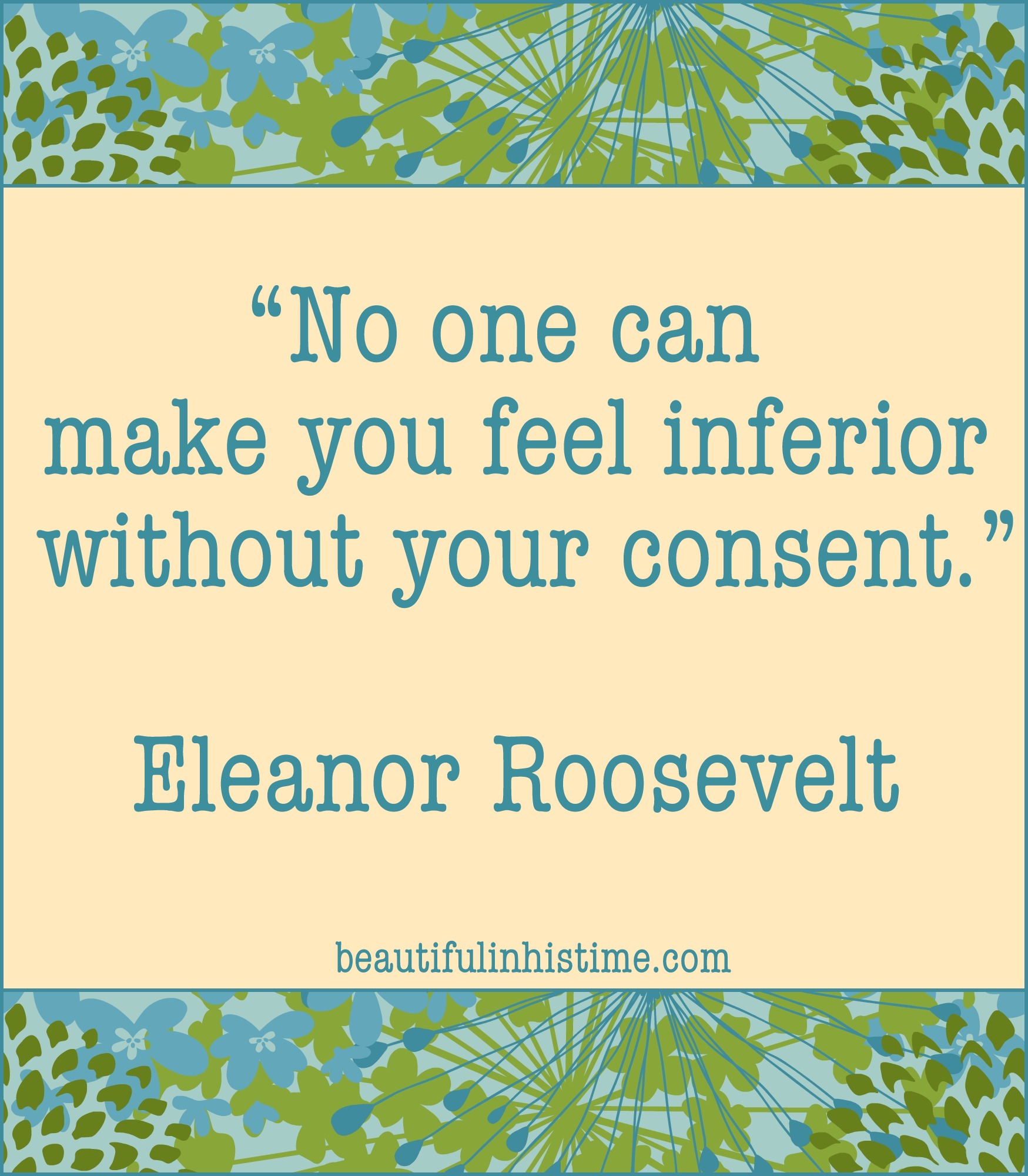 It frustrated me because I didn’t believe it. Every time I passed it I would argue:

But within every person exists the ability to look at her emotions honestly and to take ownership of those feelings for what they really are.

No one can make you feel anything. How you feel is entirely up to you.

But this ability is like a muscle. It can become atrophic and you can get so used to blaming other people and their choices for your feelings that you live a life in which you never take ownership of your own emotions – and you don’t have a clue that you are even doing it.

Trust me – I’ve lived such a life.

I’ve suffered from chronic guilt that I’m not doing enough because of what other people have done or said. I’ve participated in angry “mommy wars” online trying to defend my choices with all of the righteous indignation that I could muster. I’ve unfriended people on Facebook simply because they had devoted their lives to fitness and posted about it constantly which “made me feel bad.” I’ve unfollowed bloggers who promoted their perfect little at-home preschool activities because it “made me feel” like a loser mom. I’ve avoided friend’s blogs because I was envious of their photography and their put-together homes, and it reminded me of how much better I wanted to be in photography and homemaking.

I’ve puffed up my own choices to live in pajamas to flaunt it in the face of the moms who subscribe for the “dress for success” ideals. I’ve defended my reasonings in leaving behind attachment parenting. I’ve gone beyond a simple “that’s just not for me” and filled posts and comment boxes with excuses and justifications as to why.

I can’t tell you how many times in my marriage I have fought with my husband and the words “you make me feel…” have come tumbling out of my mouth.

The truth is that jealously, self-guilt, and self-righteousness are far more connected than we all like to admit.

They are all by-products of the deeper root of being unable or unwilling to control our own emotions.

Yes, there are a lot of judgmental or simply uniformed people out there who don’t know your story. They don’t know why you’ve made your abc choice. All they care about is their xyz. And some of them promote xyz as the only option and look down on those who choose something else.

But a lot of people are simply excited about their xyz. And thanks to modern technology, they get their chance to share xyz with the world. They aren’t purposely trying to make anyone feel less about making other choices – they just want to share their own.

So, what can we do…when she says something about xyz and you feel that twinge?

You take control of your mind and emotions. You ask yourself why you are twinge-ing.

I am no stunning example of this self-awareness, this self-control. It’s only been very recently that I even realized that I had this problem – blaming other people for my feelings.

Just last week a friend of mine (the friend pregnant with her 11th child – yes that was a real life example) posted an article about small families versus big families and some of the very selfish reasons that people chose to use birth control. I took the article very personally and responded in frustration to her post. When she removed the post, I sent her a personal message to defend what I said and explain why I said it – why what she had posted was judgmental.

While I still feel that the article she posted may have had judgmental undertones, the truth is that I simply took it far more personally than I needed to take it. I was frustrated because the author didn’t know my story. He didn’t understand that sometimes people have reasons for having a small family that aren’t selfish. I felt guilt and shame. I felt an instant of “but…but…I should…” all the while forgetting that God has led my family in another direction. I was jealous. Jealous of her and her brood of little ones and her big homeschooling family. I was impatient. Impatient because God is telling me to wait – that now isn’t my time to have another baby.

But rather than deal with my own emotions and bring them under the self-control of God’s Spirit within me, I reacted in hurt and anger and directed it all at her and the author of the article. (Thankfully she is gracious friend and received my tirade with grace and understanding.)

Dear friends, readers, sister-in-Christ, can we take stock of what’s truly going on in our hearts? Can we stop defending our choices to death when faced with someone else who has made a different choice? Can we unmask our jealousy and our impatience? Can we allow our friends to be an inspiration to us instead of blaming them for how guilty we feel? Can we walk side-by-side with women who have made different choices than us and have it be okay, because we know God has different plans for us? Can we “rejoice with those that do rejoice” and stop making everything about us?

Can we start taking ownership of our own emotions?

I’d love to hear from you. Maybe you felt like someone else “made you feel” a certain way and you either rushed to judgment of her choice or self-righteously defended your own. Can we talk about this and what was really behind those feelings?