Our little family is taking a little end-of-summer, recovering-from-the-Army’s-summer-demands vacation. We have a lot of amazing things planned and hopefully will all return a bit refreshed! But, it’s been a bumpy start.

I’ve been having a rough time of it with my last two doses of allergy shots (administered last Friday and this monday). Lots of arm swelling, itching, and redness has accompanied the shots (thank you yellow vial…so glad we finally got to meet! not!) On top of that, the pollen (ragweed) count has jumped up to between 8 and 11, which has not only left me feeling itchy and congestion, but also landed me with a cold/sinus infection. Which I think has either turned into vertigo, or possibly an ear infection which is giving me vertigo. (Or maybe it’s just medication…which I haven’t taken any today just to be sure, and I’m still dizzy!) ICK ICK ICK! I’m telling you there’s nothing worse than trying to clean house and pack for a vacation when the room won’t stop spinning. It’s such a scary feeling. Things finally calmed down last night in time for us to get everything ready to go, but even today I’m still dealing with the dizziness when I look up or down for extended periods of time.

We had an AMAZING plan. Have everything cleaned and car packed the night before (check check), get to bed at a relatively decent hour (if you consider 11PM decent, then CHECK!), wake up at 0500 (check), throw last minute stuff in the car and get on the road by 0530 (albiet 10 minutes late…CHECK!) We had this plan so Ezra would sleep for most of the trip. (HAHA! joke’s on us!)

This is our view, somewhere in Indiana…around 0700. 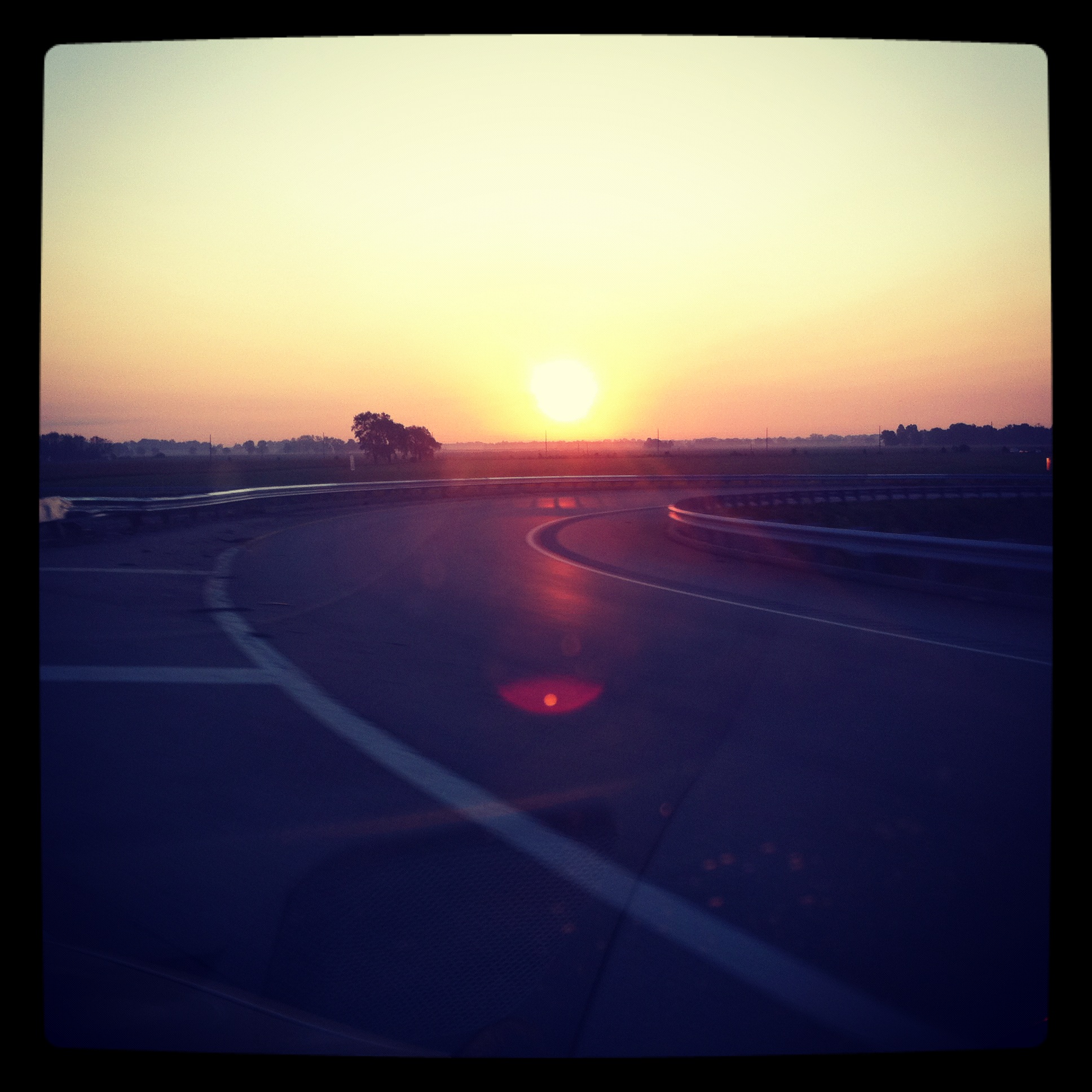 We grabbed lunch at a McDonalds, at which point Ezra stole the hashbrown right off of my plate! Sneaky fellow…. 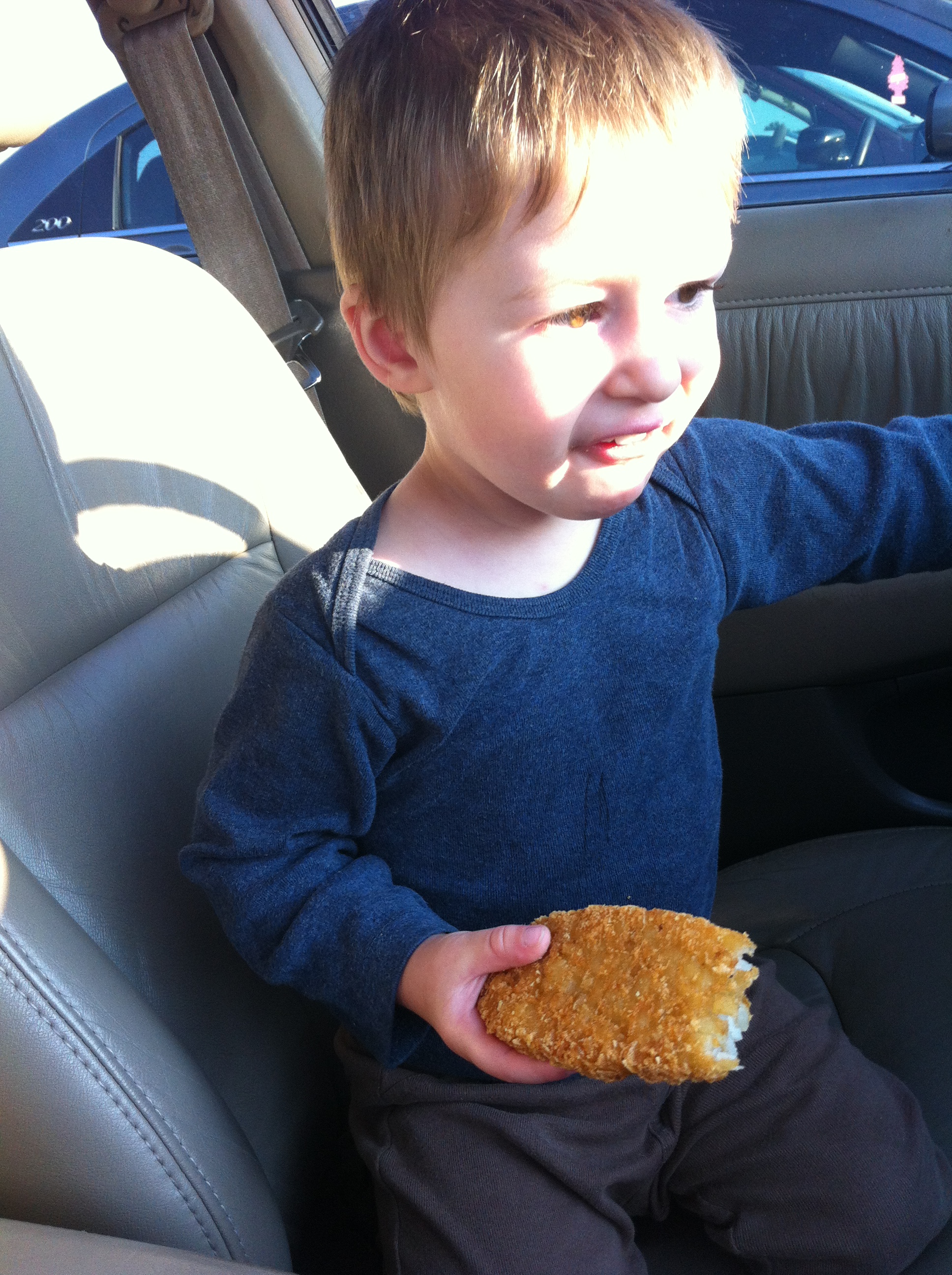 The best part about long drives with toddlers is all of the excitement over the BIG TRUCKS!!!!!!! Ezra even got to test drive one! 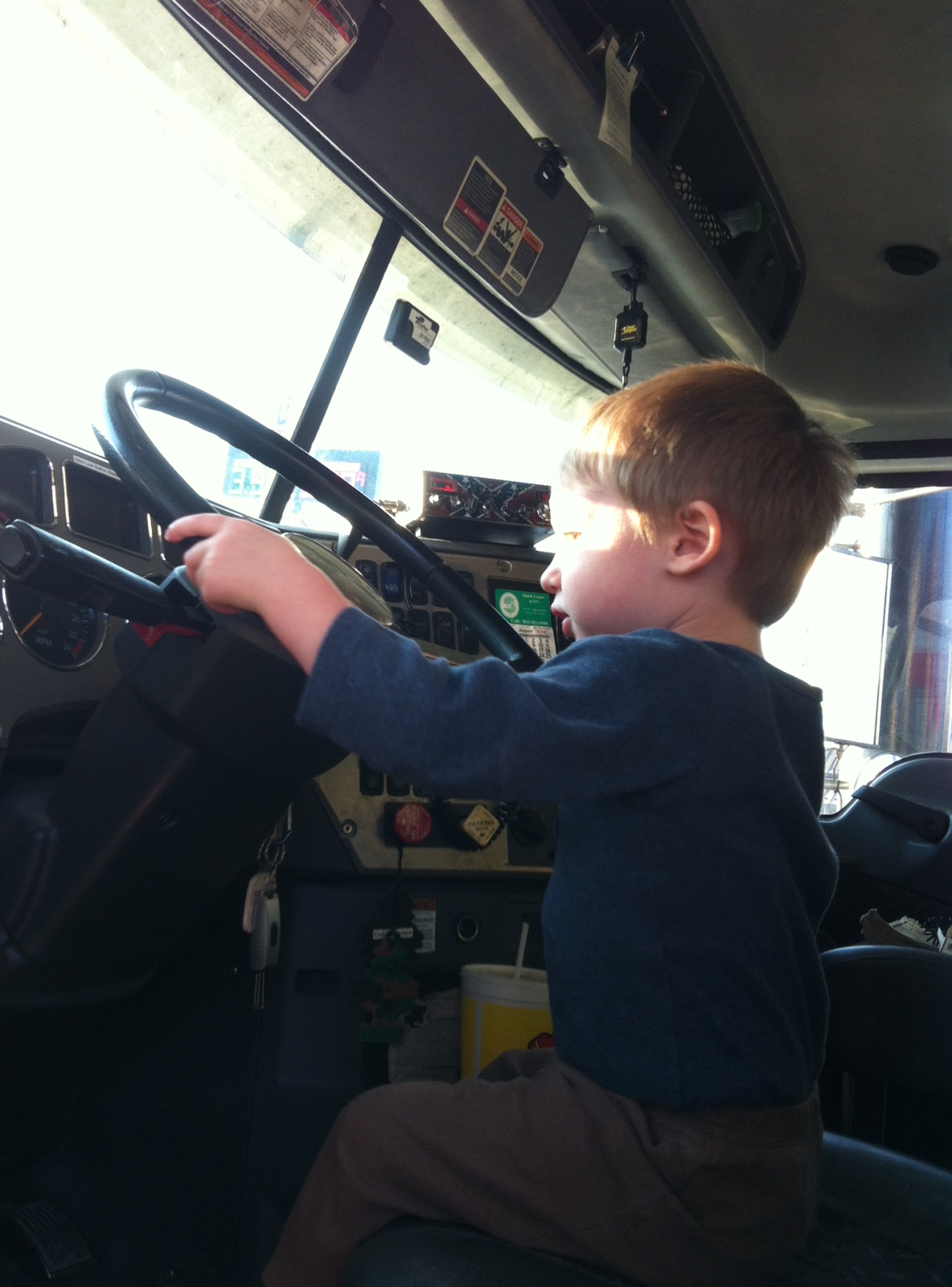 We let him test drive the car too! 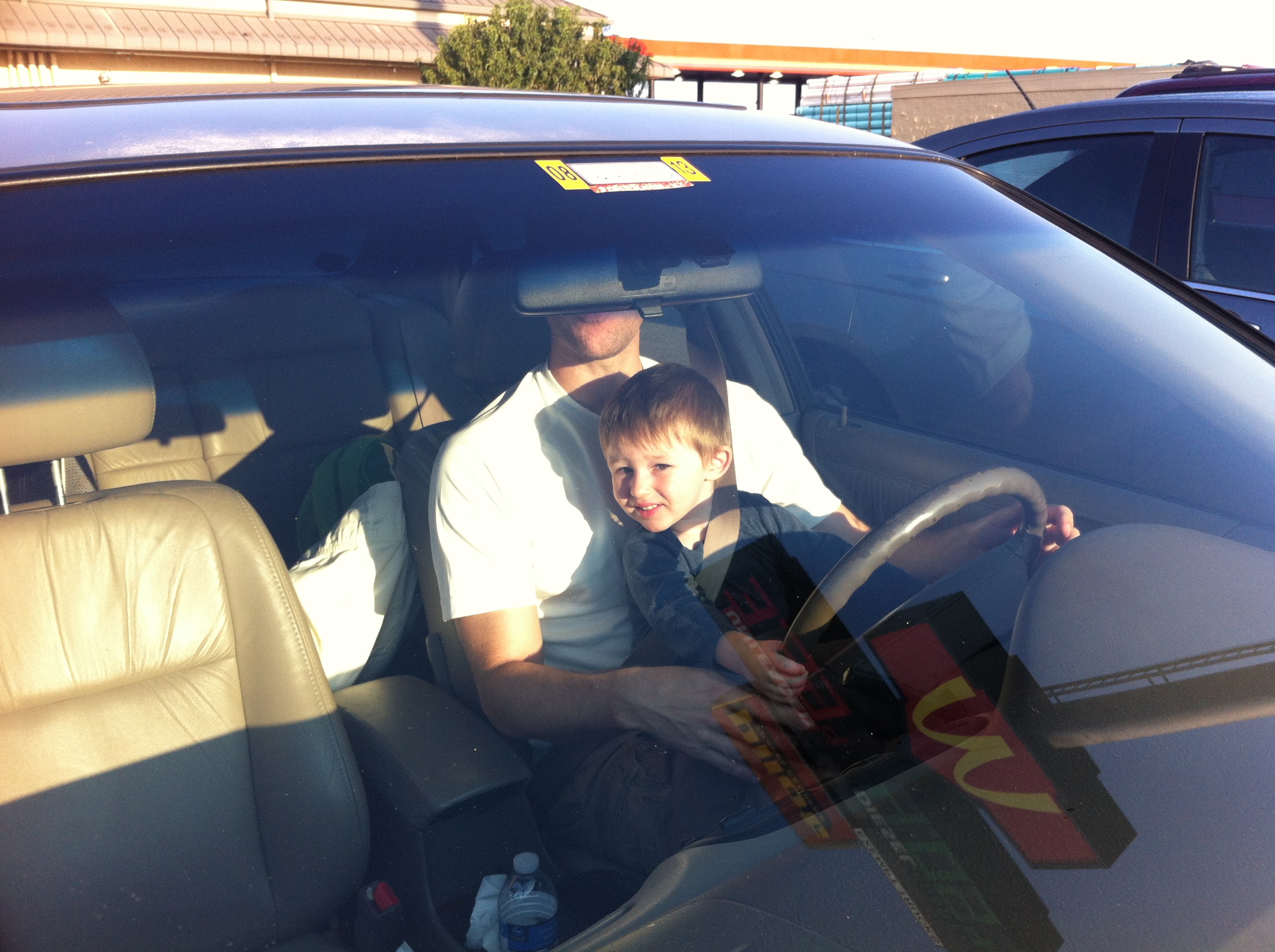 Then there was a daddy nap. 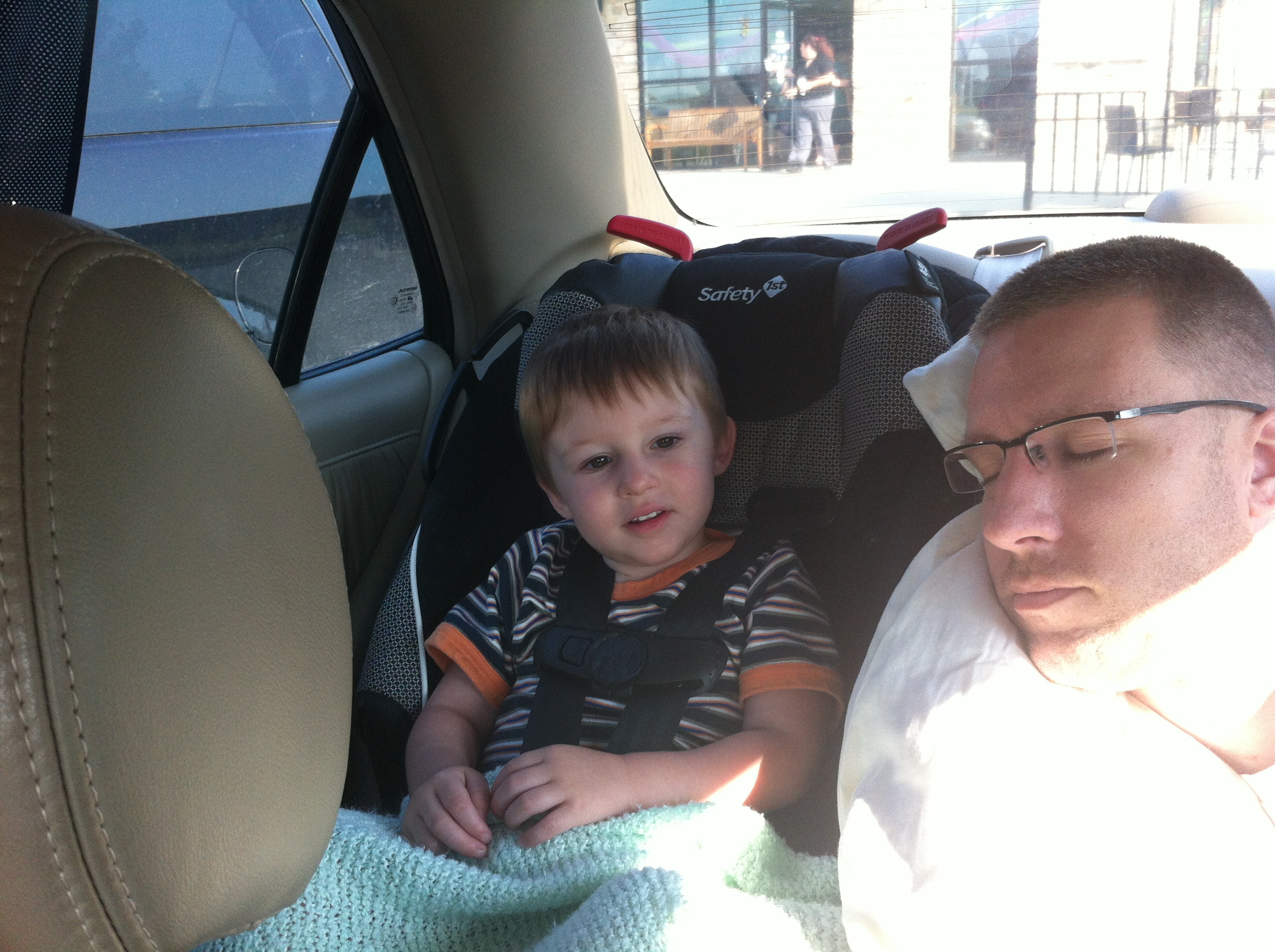 I think that having a naptime partner made it easier for Ezra to FINALLY fall asleep. Where he slept…for 30 minutes…never to nap again until we arrived at Grandma’s. (…so much for our great ideas) 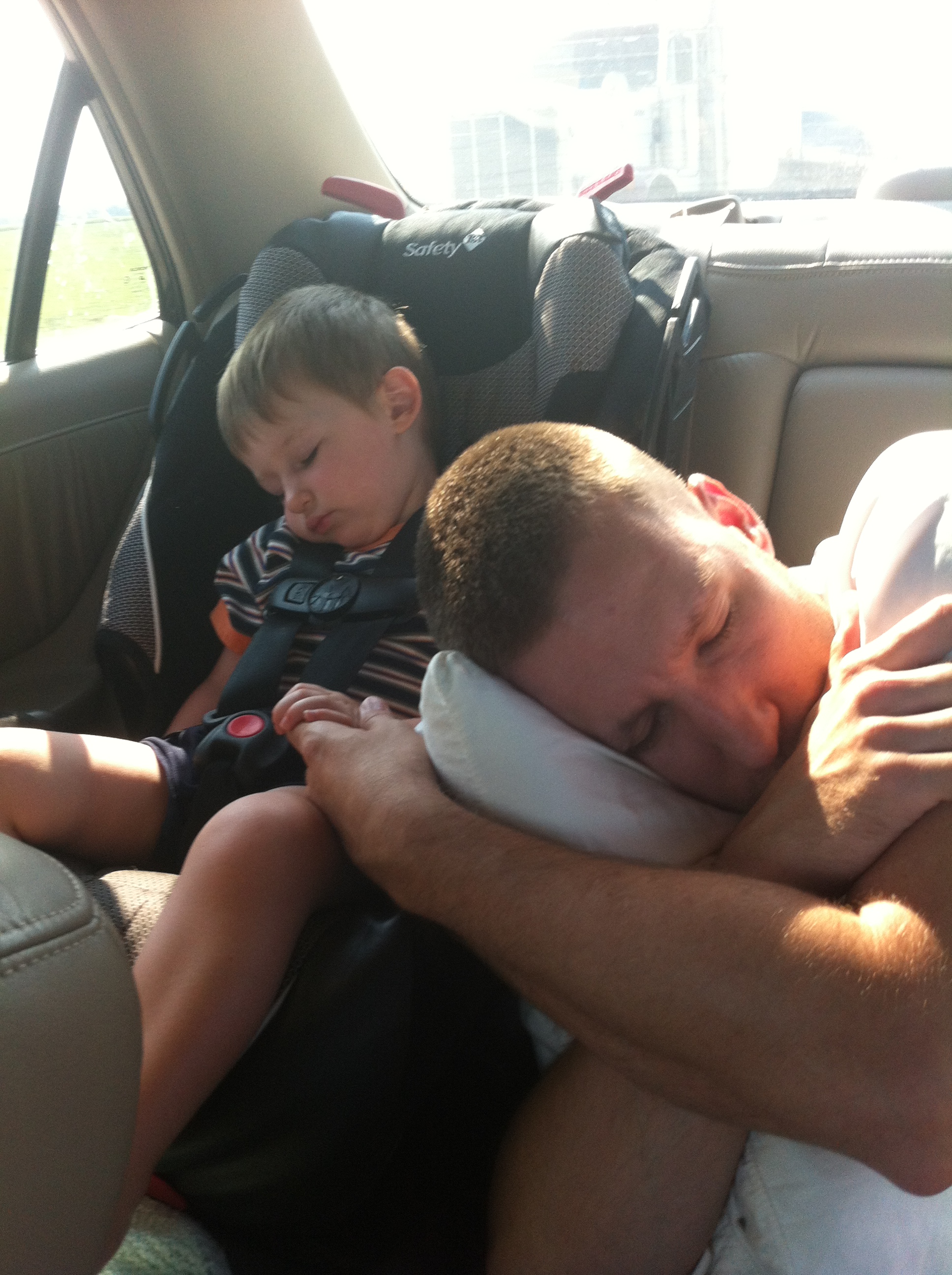 (Isn’t this the sweetest picture ever?)

Then there was another stop. We visited a mall for runaround time. Then went to McDonalds for yogurt and chicken nuggets.

We used Netflix/iPhone/Thomas to pass a little bit of time. This worked as long as Ezra didn’t touch any buttons. Which is pretty hard for a toddler to do. We think that 33 uninterrupted minutes of showtime constitutes some sort of standing in the Toddler Book of World Records. 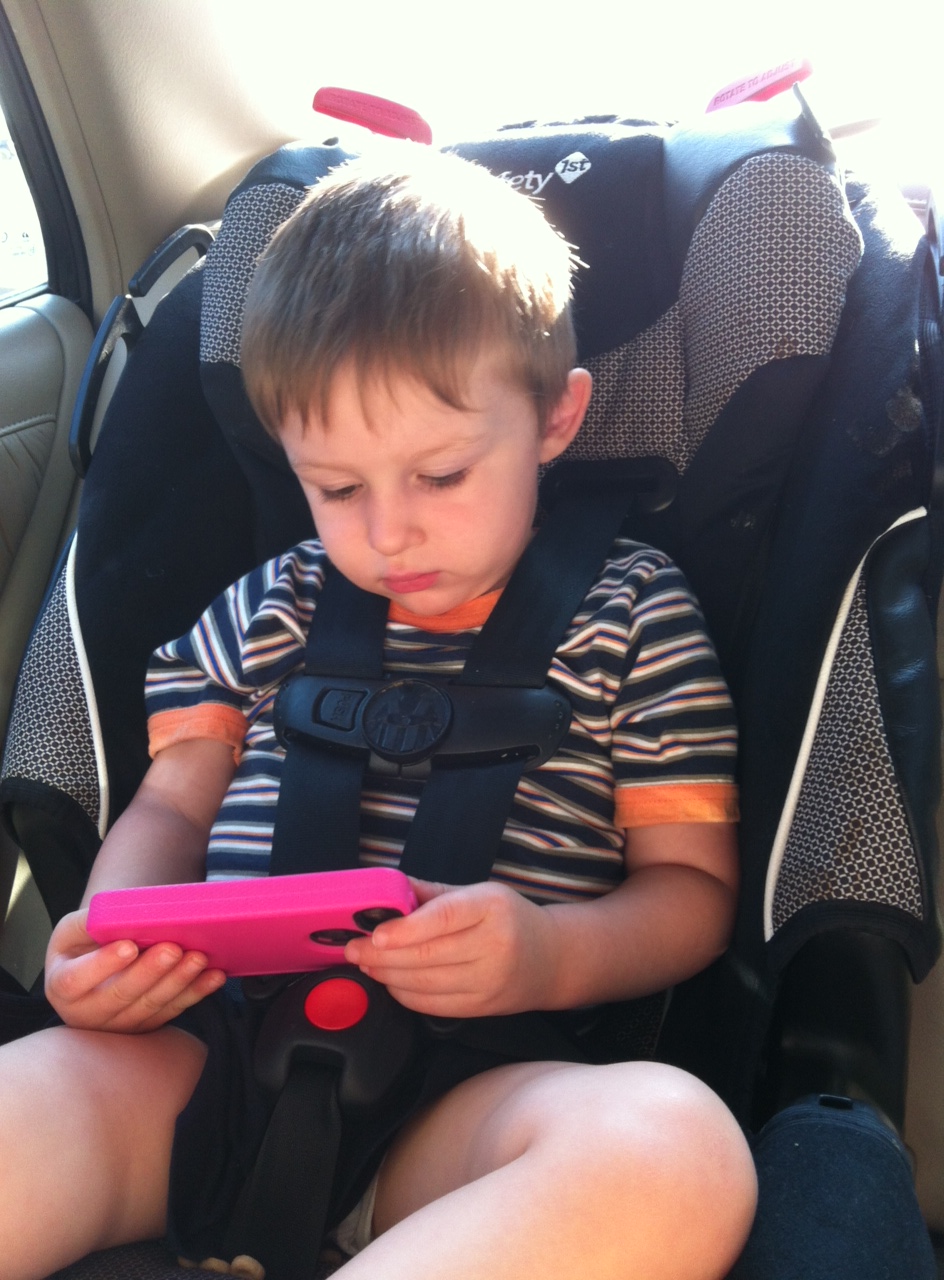 The trip really wasn’t that great. Ezra wasn’t bad…but he was tired, cranky, and well…a toddler who just wanted to “get out? get ooooouuuuut?” And Russ and I were tired. And I didn’t feel good. We stopped more times than we wanted. And we missed a few turns, and at one point wasted about 45 minutes of time trying to get back on the highway. Got a little too stressed and upset with each other. But, such is life when you are exhausted and you have a toddler. We survived, made the trip in 8 hours (which is fairly decent time, considering), and thanks to the early departure, arrived in time for leftover tacos for lunch. Not too bad.

Since we have been here at my parents house we have had a great time. My dad is out of town for another day (boo…business trip), but my mom is here and my brother got here in time for dinner. Ezra LOVES all of grandma’s cool toys (some of which are actually recycled from his uncles, like this awesome car track!!) 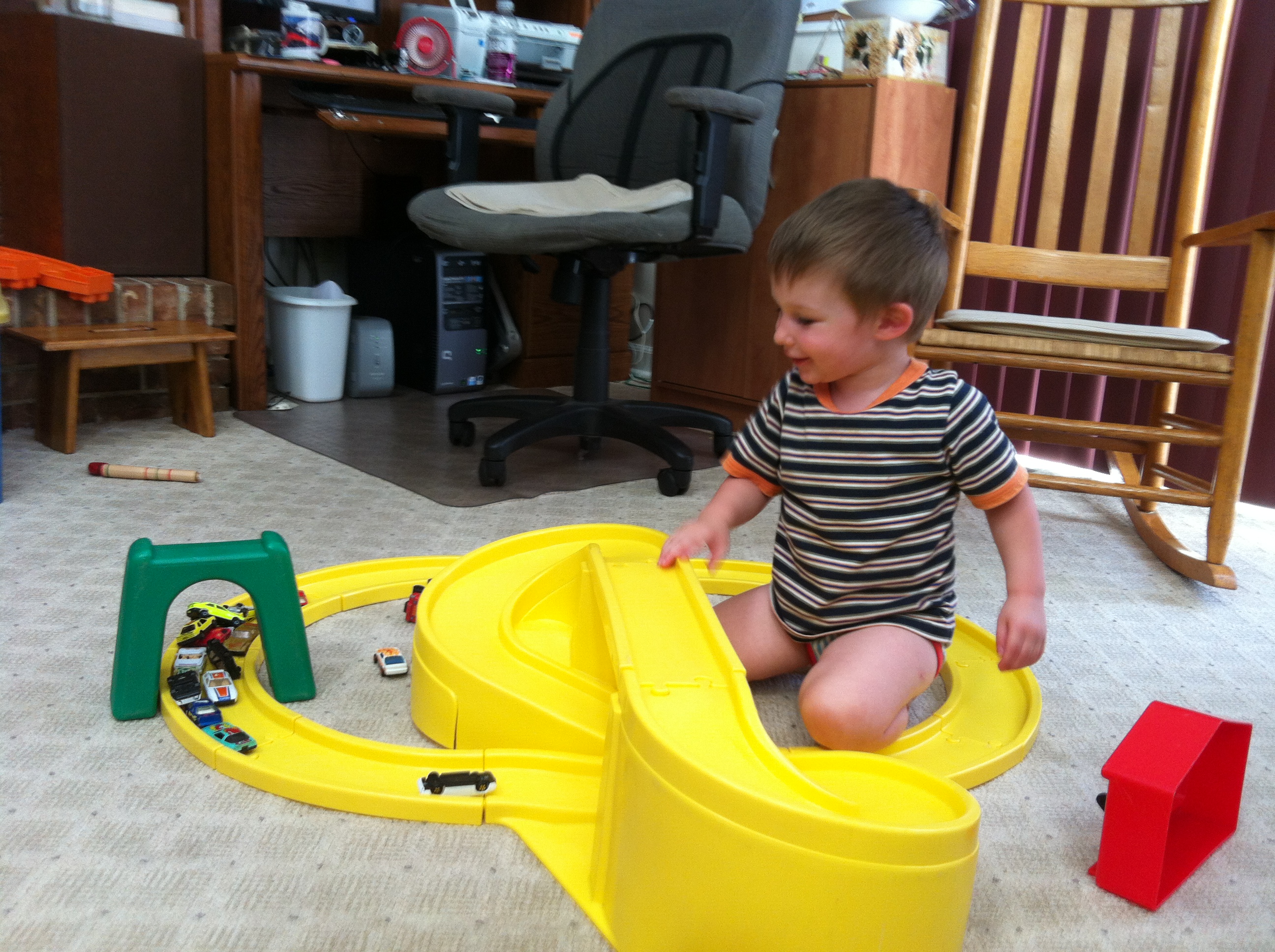 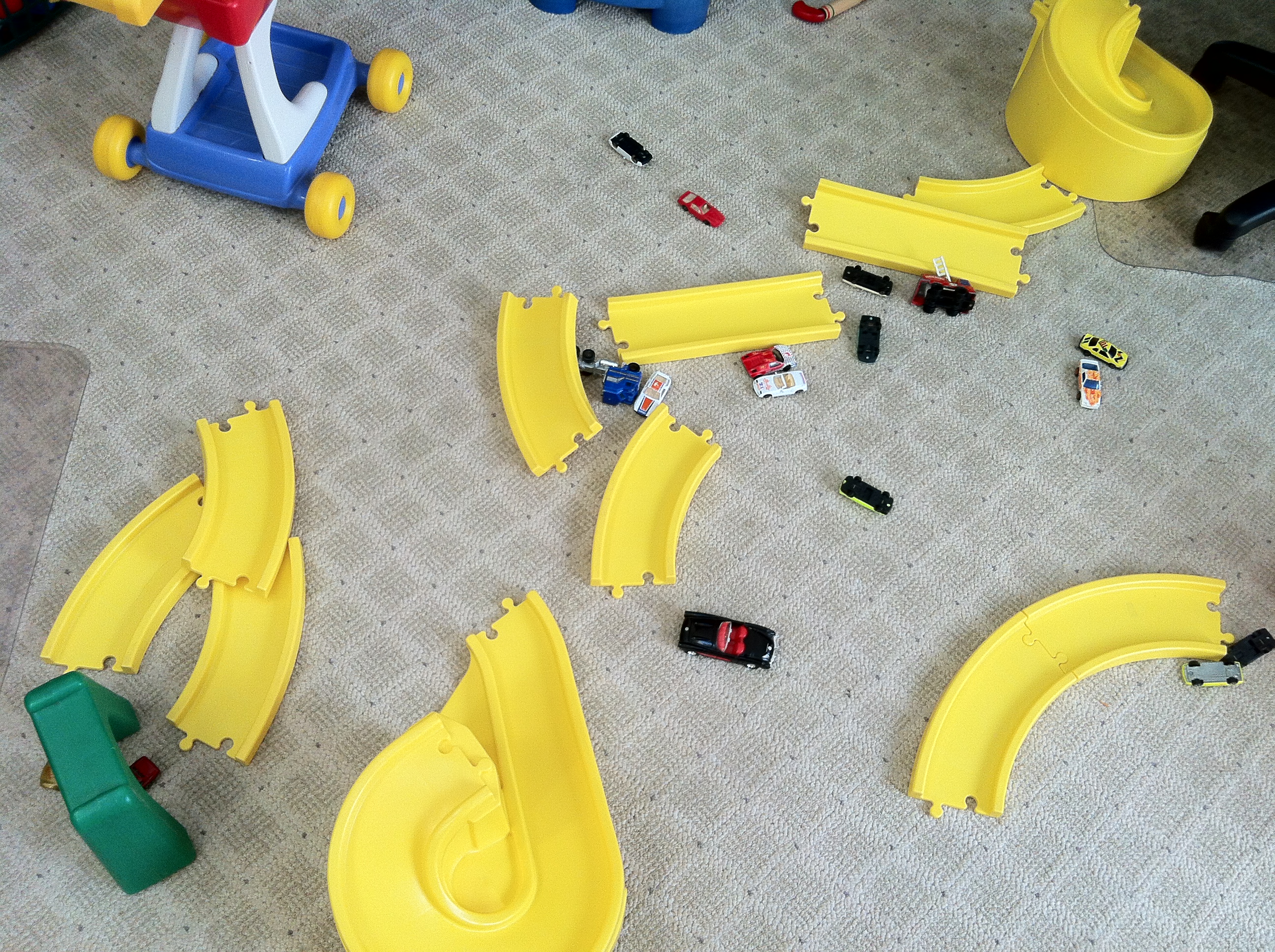 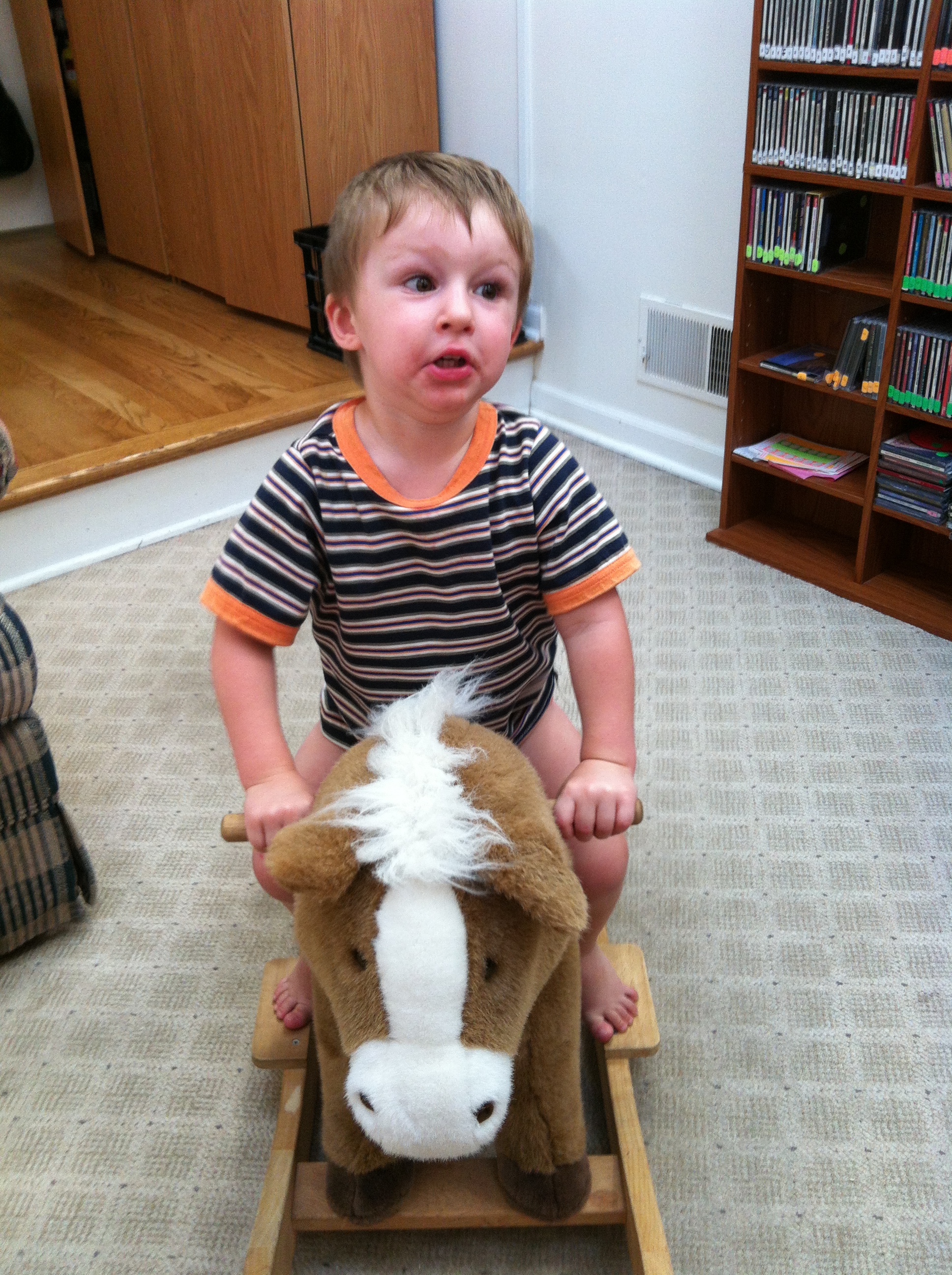 (believe it or not, this is actually one of Ezra’s excited faces!)

Some family fun after Daddy got a nap:

And then some outside playtime! 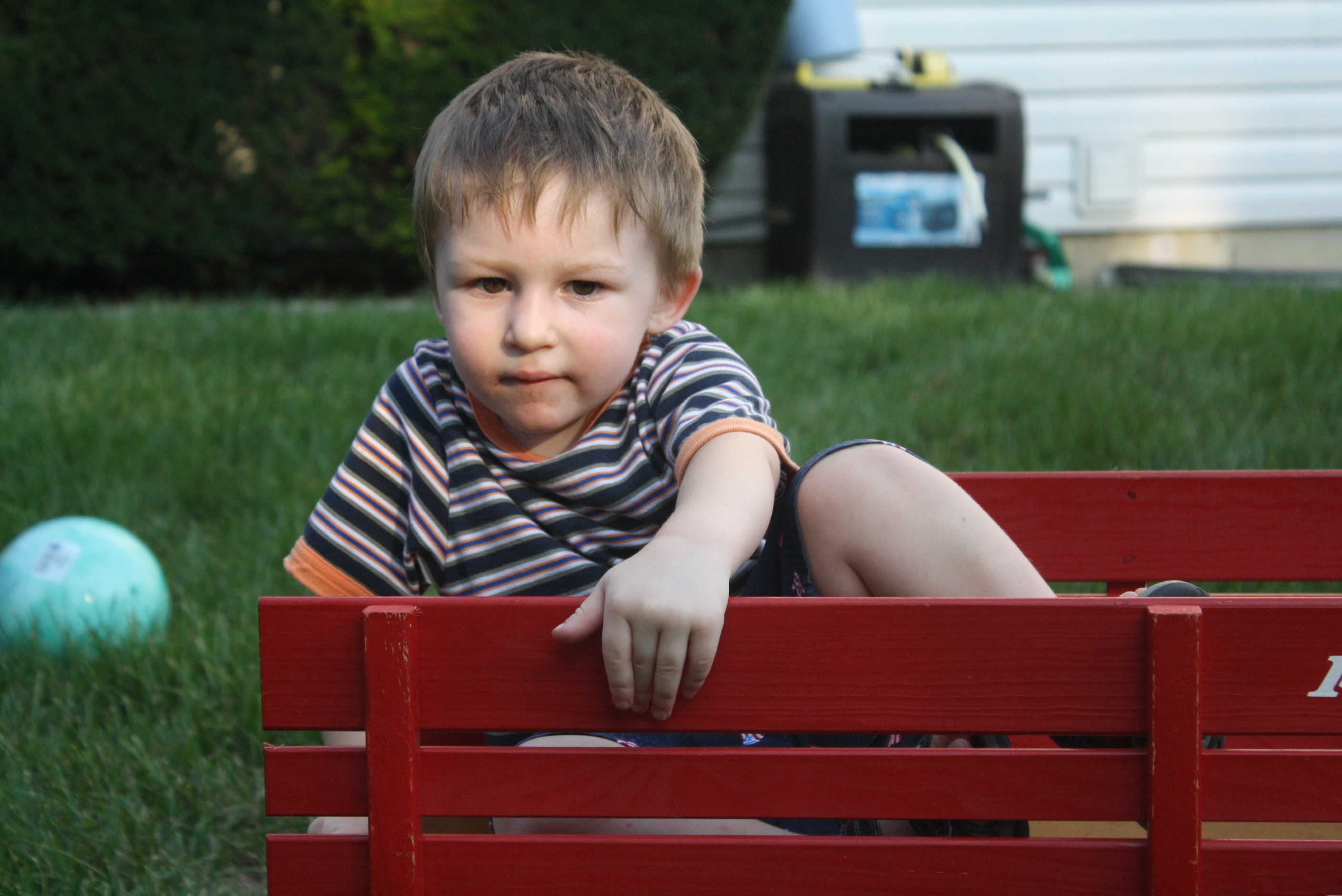 Below is his answer. 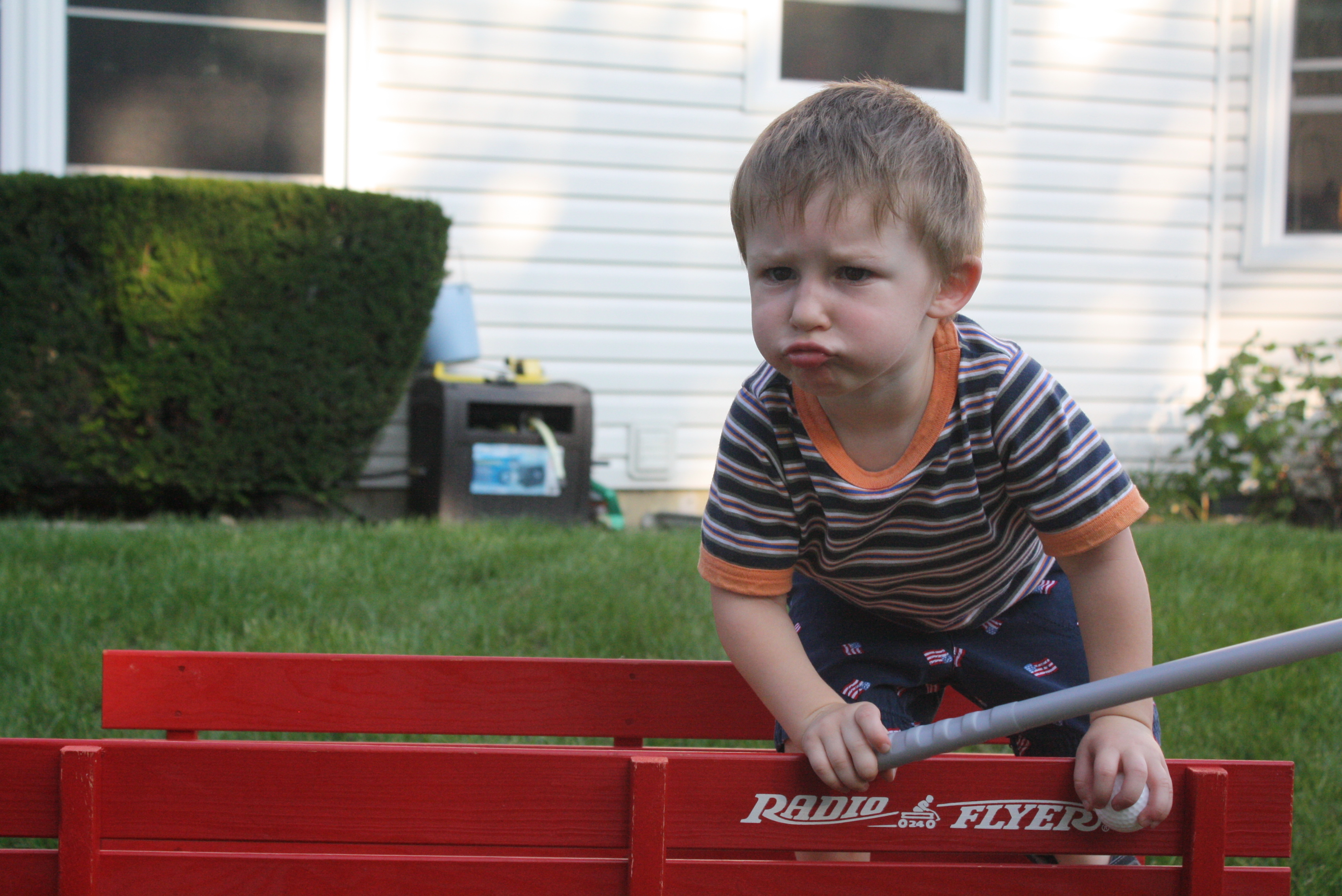 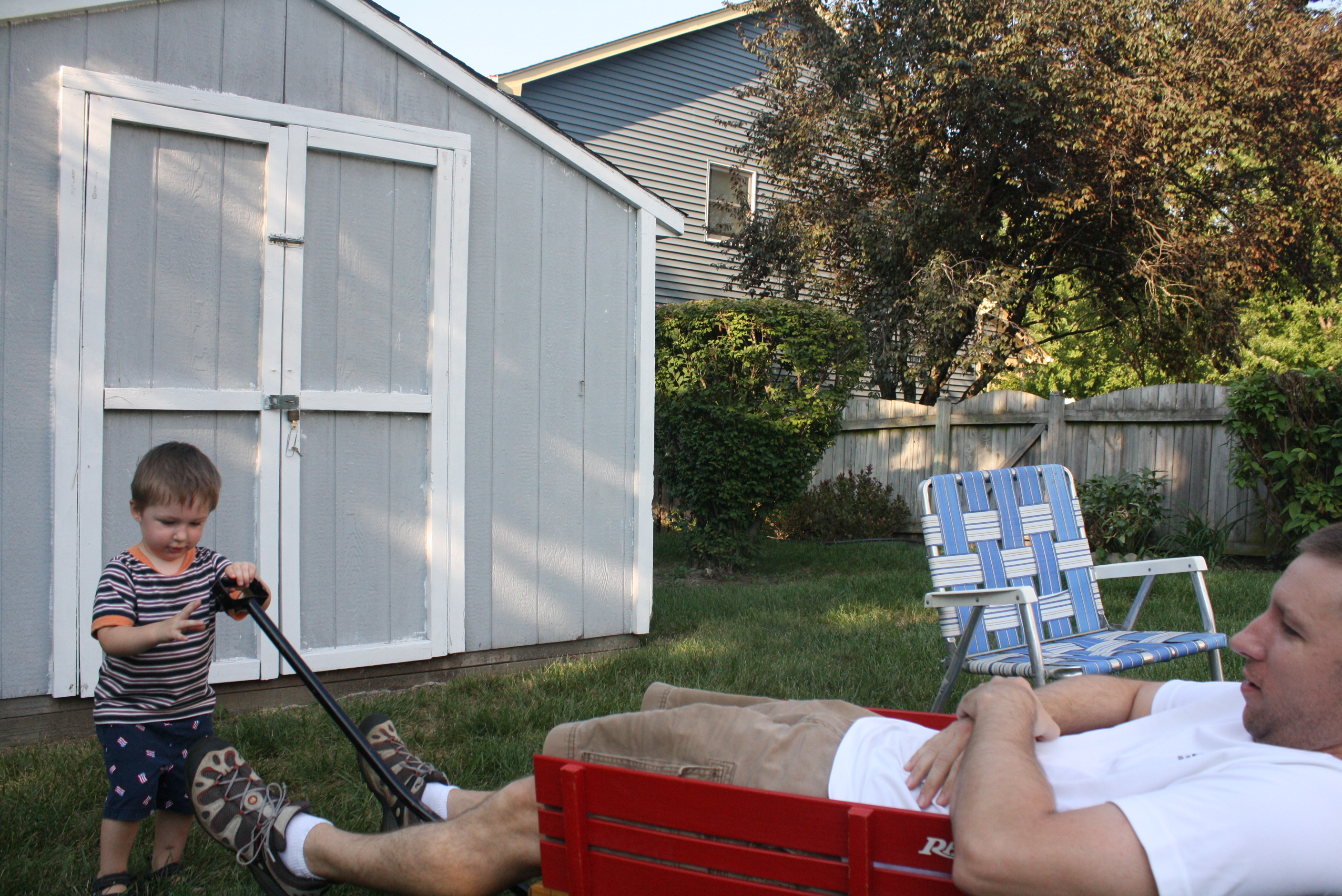 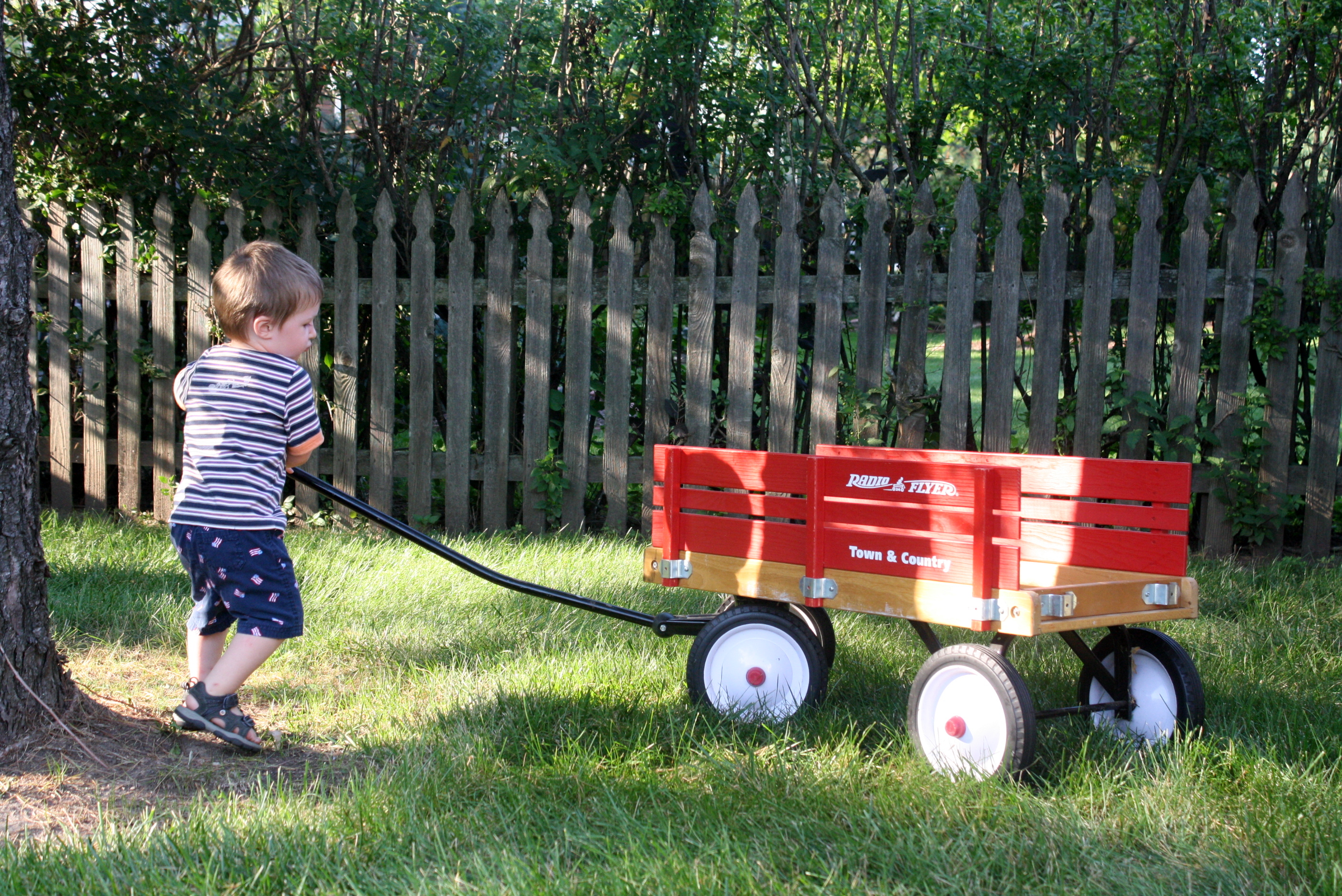 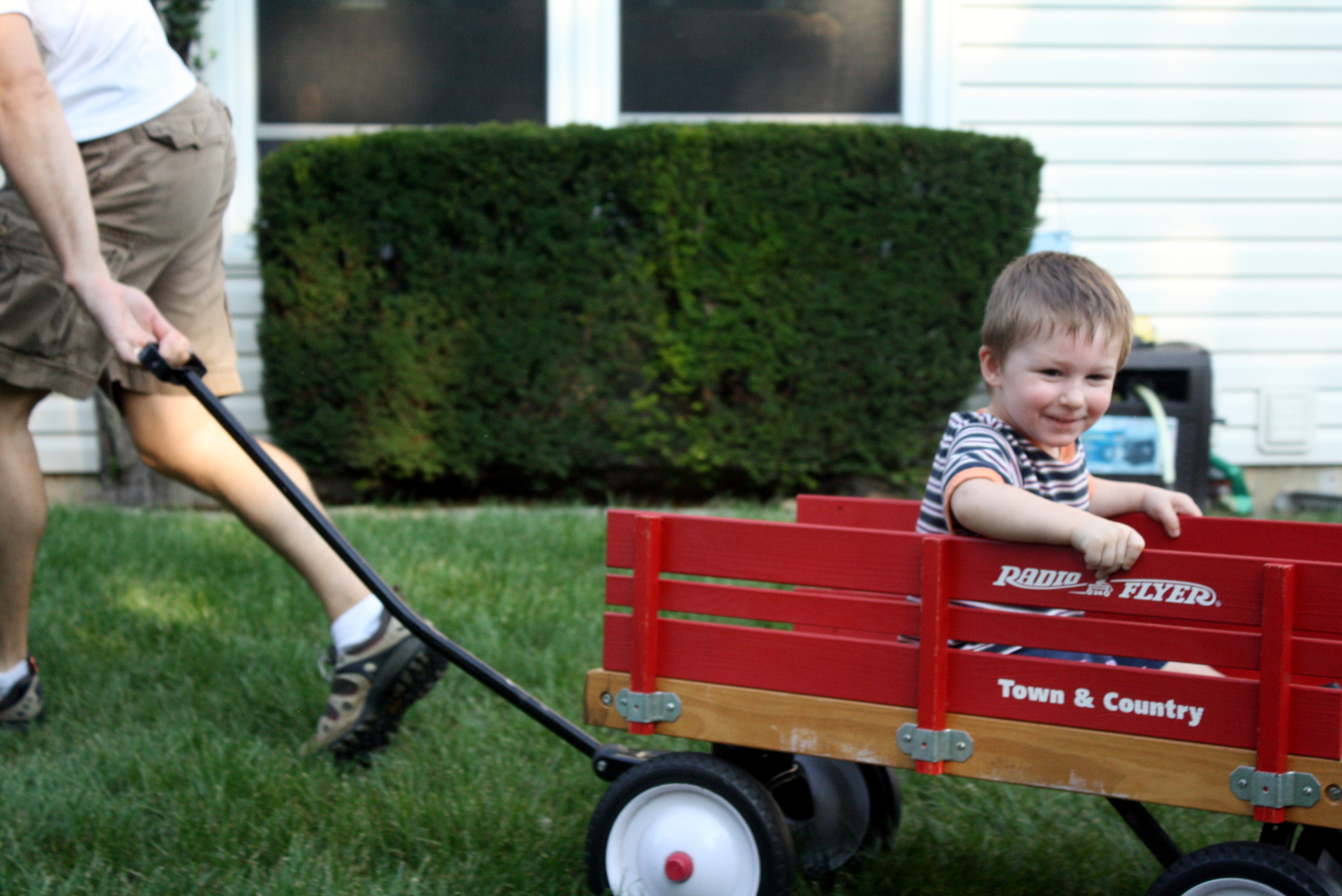 We ended the day by grilling out BBQ chicken, eating outside on the deck, and putting Ezra to bed in the BIG BOY TODDLER BED that grandma has! It’s been a good day. Now to play some cards. 🙂