He’s been home for almost two years now, we’ve been a civilian family for seven months – but most days it really doesn’t feel like it.

If you are my friend “in real life” – you hear me talk about our time as an Army family a lot. I describe the setting of my stories by saying things like when he left and when he came home and between deployments and when he left the second time.

I say when we were in the Army and when he was gone an awful lot.

And I feel awfully self-conscious about it. I don’t want people to think I’m trying to “one-up” their stories, get special attention, or be some sort of drama queen. Sometimes, I worry that my civilian friends are internally rolling their eyes thinking, “Oh there she goes again, throwing the I-used-to-be-an-Army-wife card on the table…”

(No I’m not joking. I  really worry about these things.)

I really wish I could leave it behind. Not talk about it. Not blog about it. Just shut up about the Army already, ya know?

The question remains: Why? Why do you keep talking about it, Aprille?

And the answer is simple:

Because we are still living it.

We are living it when I have to warn my husband when I’m cooking that our very temperamental fire alarm will probably go off – because he will duck and cover his head at the noise, and having a little warning helps him to prepare.

We are living it when every morning that Ezra is still asleep when Russ goes off to work I can see sadness in his eyes, a sadness that says I’ve already missed so much – I don’t want to miss this morning.

We are living it when he tells me, “Sometimes I still don’t feel like he’s my kid.”

We are still living it when things come up in conversation and he says I don’t remember that and I have to say It’s because you were gone.

We are living it when the sound system at church fritzes and the speakers reverb – and I’m up in the choir and I see my husband freak out and I want to run to his side to make sure he’s okay, but instead I watch from a distance and hope he will calm down on his own.

We are living it when I walk into a restaurant by myself and the moment I enter someone drops a dish and the sound makes my whole body tense with anxiety – because I’ve spent the last four years watching him do the same when I drop glasses in the kitchen.

We are living it when the Veteran’s Day tribute at church brings tears to my eyes and he doesn’t want to stand up.

We are living it when I’m sitting at the Thanksgiving dinner table surrounded by family and he’s at work – but I have to actually remind myself that he’s only across town because him being on the other side of the world at holidays feels so normal. And even though I hate it and I miss him I wonder if it’s better this way because family gatherings with a lot of noise have a history of getting him stressed out.

We are living it when he texts me I miss you and again I forget that he’s only at work instead of at war.

We are living it when I can’t stop the tears when I heard read at Allume posts like this one from my fellow military sisters – because the pain of being separated from the one I love for three out of seven years  still. feels. so. fresh.

We are living it when every. single. year I cry at this song because I remember what it felt like to have him surprise me by coming home for Christmas when I didn’t think he was going to make it – and because I remember how it felt during the three Christmases that were tainted by deployment.

We are living it when I realize that spending two years on my own and getting to make my own schedule is still affecting me – and that sometimes I’m resentful that I don’t have that freedom any more.

We are living it when he tells me that he feels like I don’t need him for anything because I’m so self-sufficient.

We are living it when his default mode is panic, fear, tension, and anxiety. When he’s gotten so used to the constant pressure, last-minute ruck marches, 2-hours notice for CQ duty, physical fatigue and exhaustion that he doesn’t know any different. When he struggles to simply relax and let down – even seven months later.

We are living it when my phone dies and I get home from shopping an hour later than I told him I would and he’s so worked up from worry it takes him a few hours to calm down – even though when he was in Afghanistan we would go days without talking while I travelled all over the country.

We are living it when sometimes he just has to cry and he can’t explain it. The tension, frustration, anxiety, depression just builds until he sees something completely random on the TV that sends him over the edge and he can’t hold it back anymore.

We are living it when he tells me “I don’t know if I will ever be better.”

And when he tells me in a shaky tear-filled voice over the phone: 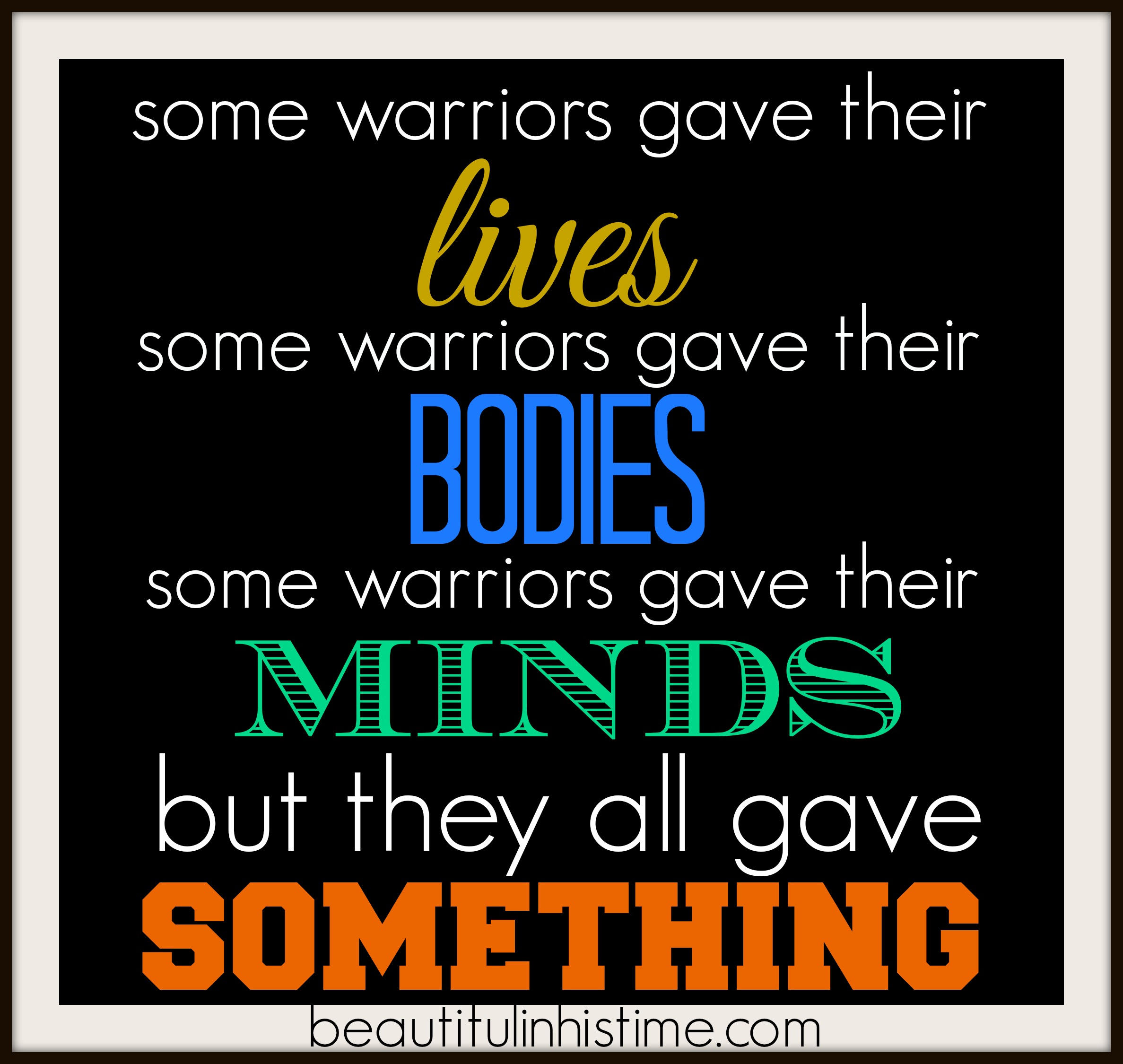 My husband bares no physical scars from war. But the scars on his mind and our hearts and our little family remain. Not a day goes by that we don’t feel the effects of war. We don’t always talk about it, but it’s always there.

“In war, there are no unwounded soldiers. – Jose Narosky”