[I have been told that this is Aprille’s 300th blog post. I have only one thing to say about that honor:

And now for something completely different…

Being a dad is tough.

Well…it is for me.  My son was about 4 months old when I left for Afghanistan.  So he was about 1.5 yrs old when I came home.  Apparently I saw and interacted with him when I was home on R&R but I only vaguely remember parts of this and flat out can’t remember the rest even when my wife tells me stuff I did in vivid details.

I mention that last bit because it could be part of my problem, but I don’t really know for sure.  I don’t have TBI or anything, I just have huge holes in my memory and it seems to be an ongoing problem.  But back to the point.  So I came home and he was on his way to being 2 and it was really strange for me.  It was like my wife had this kid and I was married to her and was the dad just by default rather than by any sort of genetic reason.
(To be clear: my son is mine, he is not some other guy’s kid that my wife had.  It is my biological son.)

That feeling has persisted.  I don’t really know how to explain it, but I will try because I am going somewhere with this.  I know he is my son.  I was there for the conception, pre-labor growth, and delivery of my son.  I remember parts of his life just after coming home from the hospital and spent as much time as I could with him before my deployment (so far as I can recall).  But now I look at him and I feel like I am kind of an adopted dad.  Like my wife’s husband died and I am raising his kid.  This happens pretty much all the time.

My wife says I do good with him, and I try.  I love playing with him and being silly.  And I can easily help teach him and correct him because its important that he grows up to be a man, so I just do what needs to be done with all of that.  I just don’t feel like he is mine.  Like….I don’t know.  Like maybe if you were building a castle out of legos but somebody before you came and built all the exterior walls and the main tower.  You can build the whole city and decorate it and stuff but it will never really be yours.

Thats how I feel.

I don’t know if it was our anniversary or what, but I just had a moment where I was playing cars with my son who was in the tub.  And in that moment everything just felt….normal.  Like we were a normal family:  a man and his wife with a wonderful boy.  It wasn’t the least bit strange or weird at all.

It was really nice.

It didn’t last long and soon that weirdness of parenting someone else’s kid came flooding back in.  But it was a nice moment that I will remember.

Maybe this is just what being a dad is like and nobody ever told me before.  I mean its not like there is an instruction manual for taking a little boy and teaching him how to grow up responsible, mature, capable of reason and gentleness while still taking 16 metric tons of crap that life wants to pour on you and never giving anyone the satisfaction to see you truly quit.  So I just do my best, and rare moments like this help.

Maybe that is what parenting is like.  Like you are whacked out of your mind crazy.  And then, for just a brief moment, everything is clear and reason returns and your senses tingle with stimulation.  But then you go back to being batty.  But you still remember that its possible for things to make sense and be good.  And thats why you deal with all the times that they are not.

So I guess I am saying thanks.  To my son.  For giving me one of those rare moments that make it all worth it.

Cuz this daddy stuff is hard. 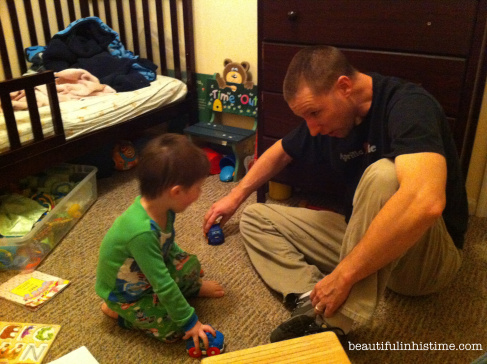 How to be a better mom while being exhausted

Bite for bite: a dinnertime strategy for picky eaters