Along with preparing to move to North Carolina in the space of 10 days, I was also trying to squeeze in last minute coffee dates, playdates, and appointments so I could spend some time with people who have become really important to me over the last 3 1/2 years. I wasn’t able to see everyone, but I did what I could.

But before I get to that, I have to share one thing that happened before we made our survey trip to NC–before we got the job and the apartment:

My last PWOC meeting was really neat and full of God. Partly because…I didn’t realize it was my last meeting. I was busy subbing in as worship leader for the day because ours was out of town. It was so nice getting to sing and play with my PWOC sisters one last time. Then afterward, Jennifer, our prayer coordinator called me back up. It’s customary that when one of our sisters PCSes or ETSes that Jennifer and some of the women lay hands and pray for that person. It was my turn. I exclaimed, “I have one more week! I’ll be back…we don’t have to do this today!” I think the fact that I wasn’t expecting it really helped to minimize the emotional impact of leaving the group. There were no tears. (In fact I cried more when I wasn’t the one leaving than when I was!) Then I rushed off to Bible study where I went to class and left afterwards with no emotional goodbyes at leaving.

Due to moving our moving dates up by a week I wasn’t able to go back for that one more week like I had planned. So, I never really got to say a final “goodbye” to everyone, but I think it was better that way. Military wives really hate goodbyes. I was prayed over, and that was enough of a goodbye for me.

Back to our last days in Kentucky…

Here we are at our last visit to our chiropractor, Dr. Casey! He has been my chiropractor since I was about 16 weeks pregnant with Ezra. He’s an amazing Christian and a balanced individual and has helped me so much with his guidance about my diet. He’s also been adjusting Ezra since infancy free of charge and Ezra loves seeing him! I’m so thankful that we had a doctor like him in our lives! 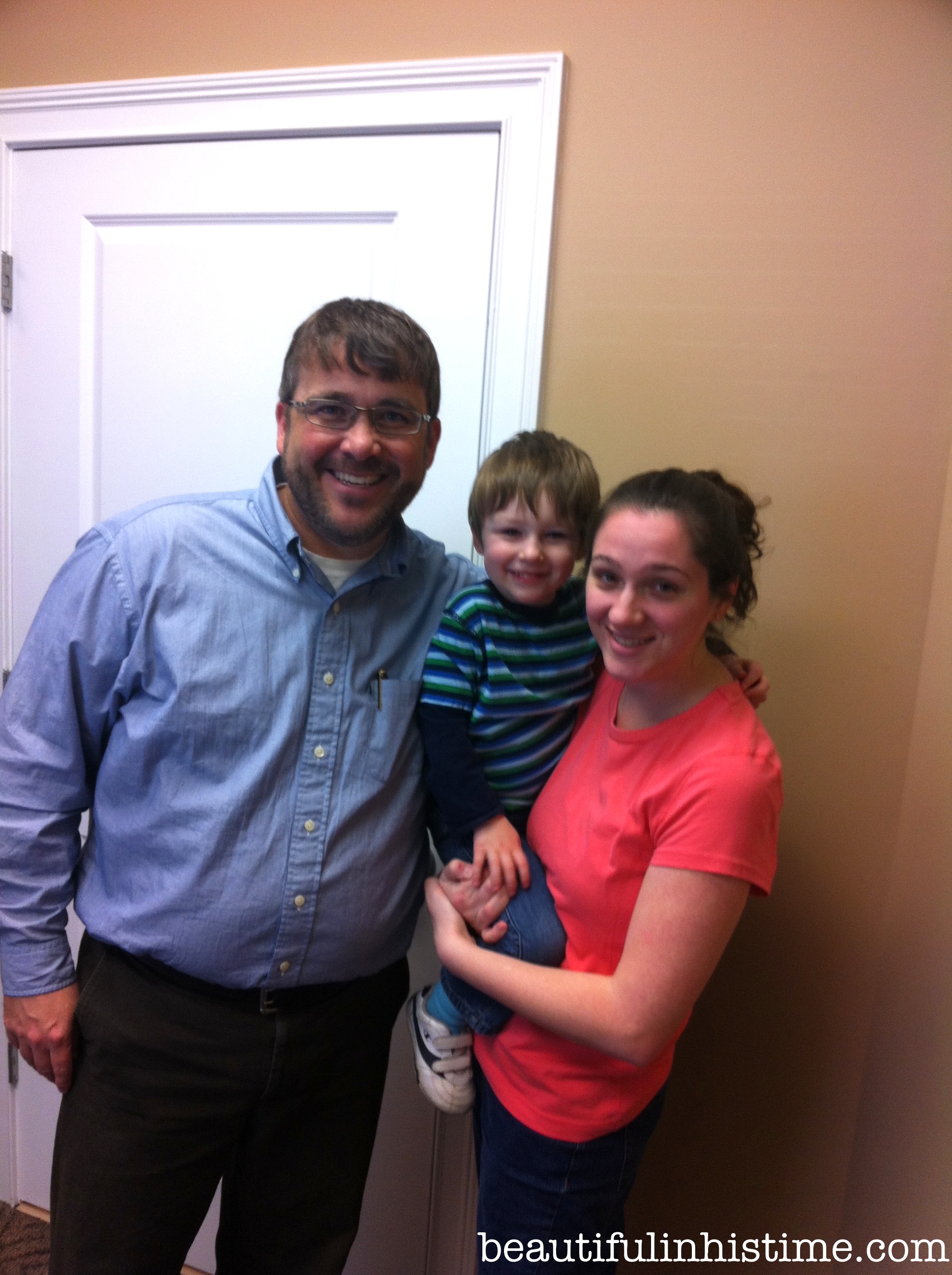 Our last Friday evening we went to the mall and we were so glad to find our midwife working shift at Supermommy’s. Mary Carol helped to deliver Ezra and has been in our lives for over three years. She is working hard to advocate for natural birth options in Kentucky and is hoping to open Kentucky’s first freestanding birth center! 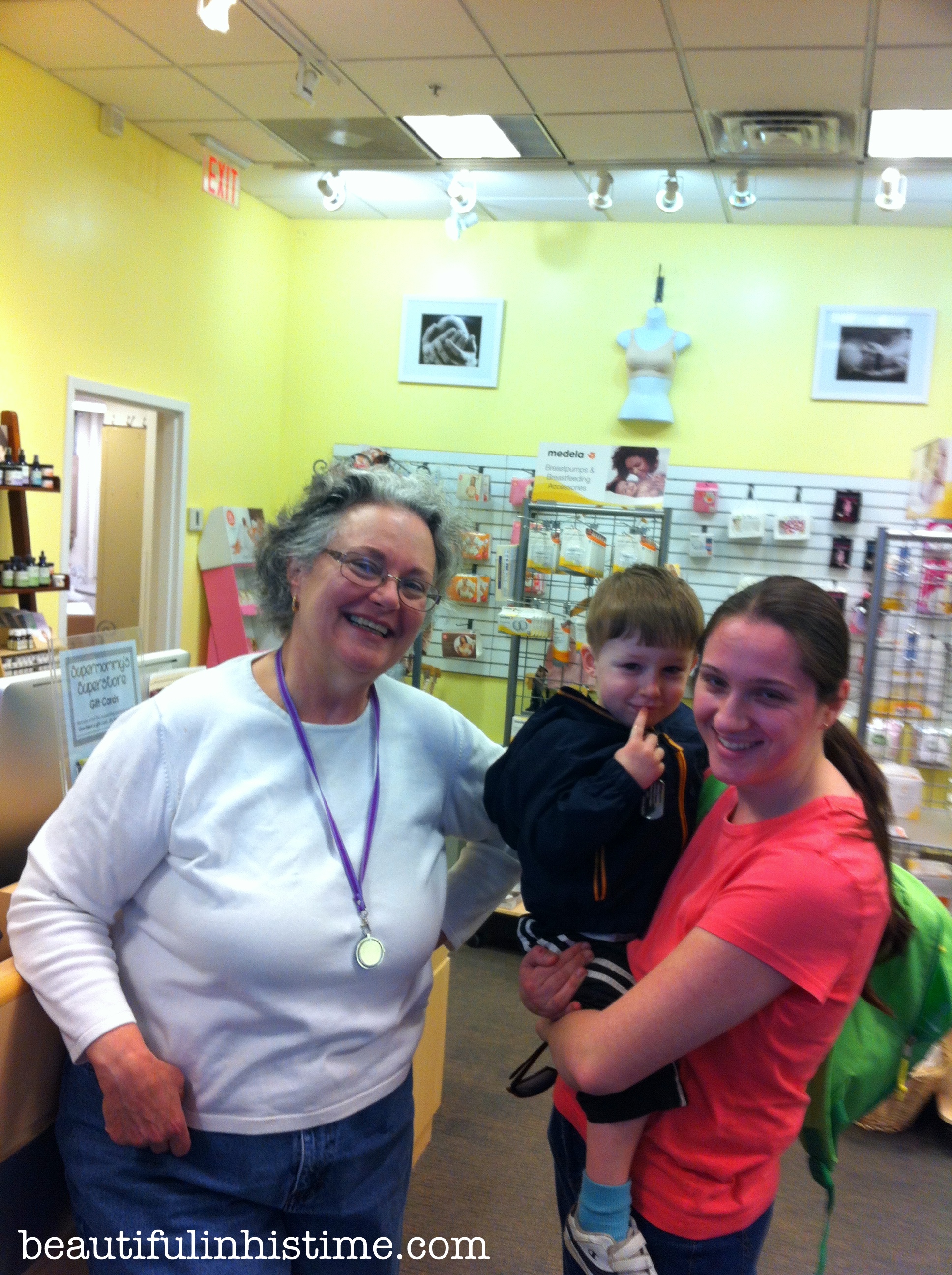 We also met up with Sarah, our favorite nurse and lactation consultant from Ireland Army Community Hospital. I first heard of Sarah when the labor and delivery LC handed me a little pink card with her name on it. She told me that she could help me when Ezra was struggling to nurse. When I was working with another LC, Amy, our La Leche League leader at the time, she also recommended Sarah to me. Finally, I called and set up an appointment to see this supposedly wonderful LC after Ezra’s one week checkup. But, things didn’t go exactly as planned.

The walk from the car into the clinic exhausted me because I unknowingly was suffering from severe high blood pressure, blood loss, and infections. I started to cry and this nurse looked at me and said, “Oh, you don’t look good!” She quickly got me some water and took my vitals while Ezra was being weighed and measured. When she saw my blood pressure she got me into a wheel chair and wheeled me straight to the ER. Thus was our first time meeting…a sick, blubbery new mom and the lactation consultant she wanted so desperately to help her learn to nurse who was now focusing her attention on mommy, not baby.

Sarah was also the one who made sure I took the hospital’s post-partum depressing screening, and determined to get me help when it was apparent I wasn’t doing well. She insisted that I see the at-that-time head of pediatrics who was a mom who had suffered from severe post-partum psychosis. Together, they didn’t give me a choice about getting help and personally made my appointment to see specialists at behavioral health.

Somewhere amidst ER visits and post-partum screenings, Sarah also worked with me on multiple occasions to help Ezra learn to nurse, and she was with me the first time he latched for a long feeding.

Sarah was also there when our doctor first heard Ezra’s heart murmur (which we found out later was symptom of a heart defect which at this time he’s already grown out of.) That was another scary time when I wasn’t allowed to leave the hospital until Ezra had an appointment with a specialist.

Sarah quickly became our favorite nurse and we got to see her the multiple times Ezra came in for ear infections, strep throat, and rashes. We quickly became friends and she was also available to me the times I texted her pictures of weird bumps and eye styes and asked her questions to help me determine “should I have him seen or not?” We are so blessed to have had such a wonderful nurse and lactation consultant…and also a Christian friend to have an occasional coffee date with (when Sarah wasn’t busy helping out more poor mommies and babies like Ezra and I)! 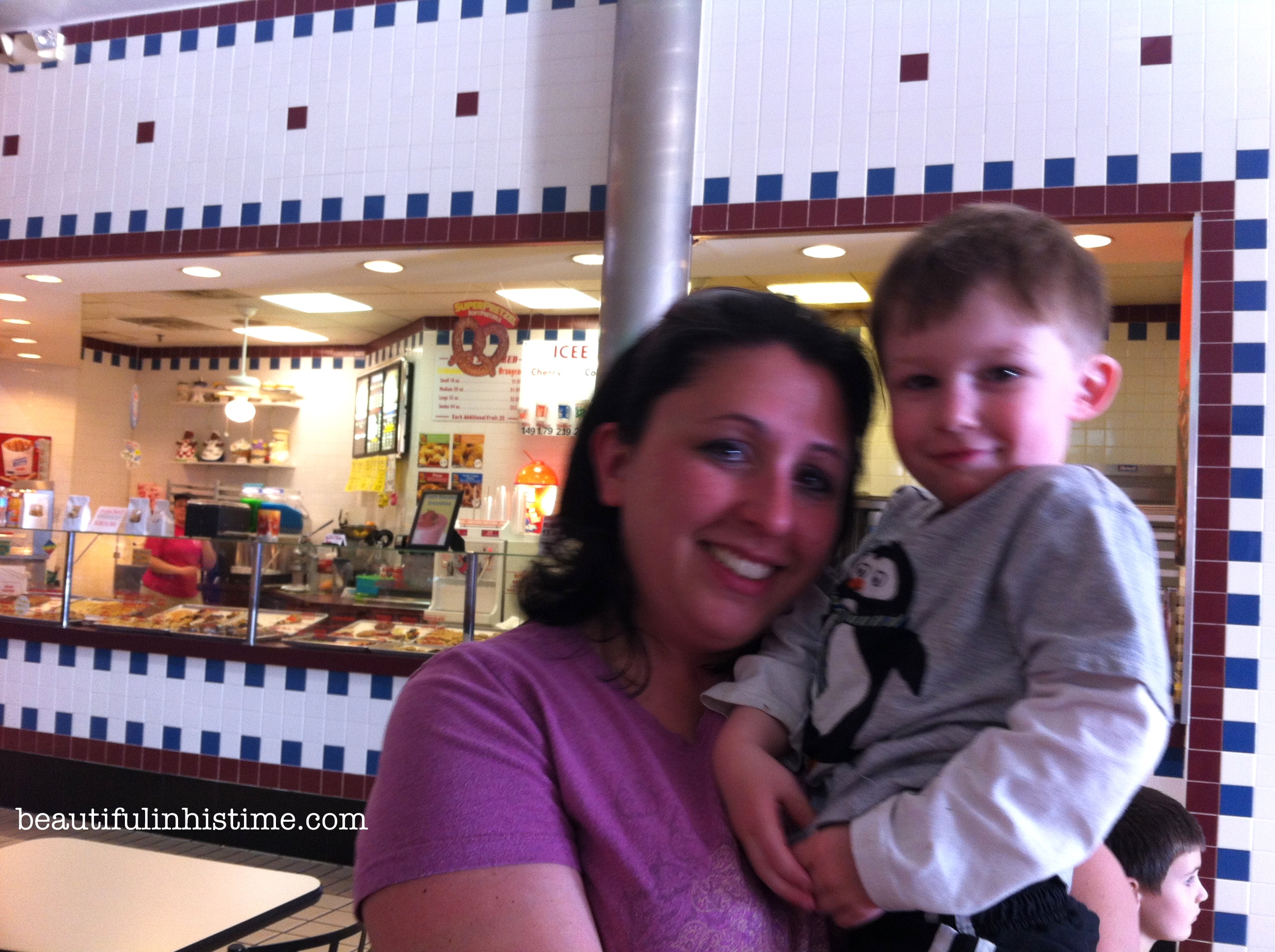 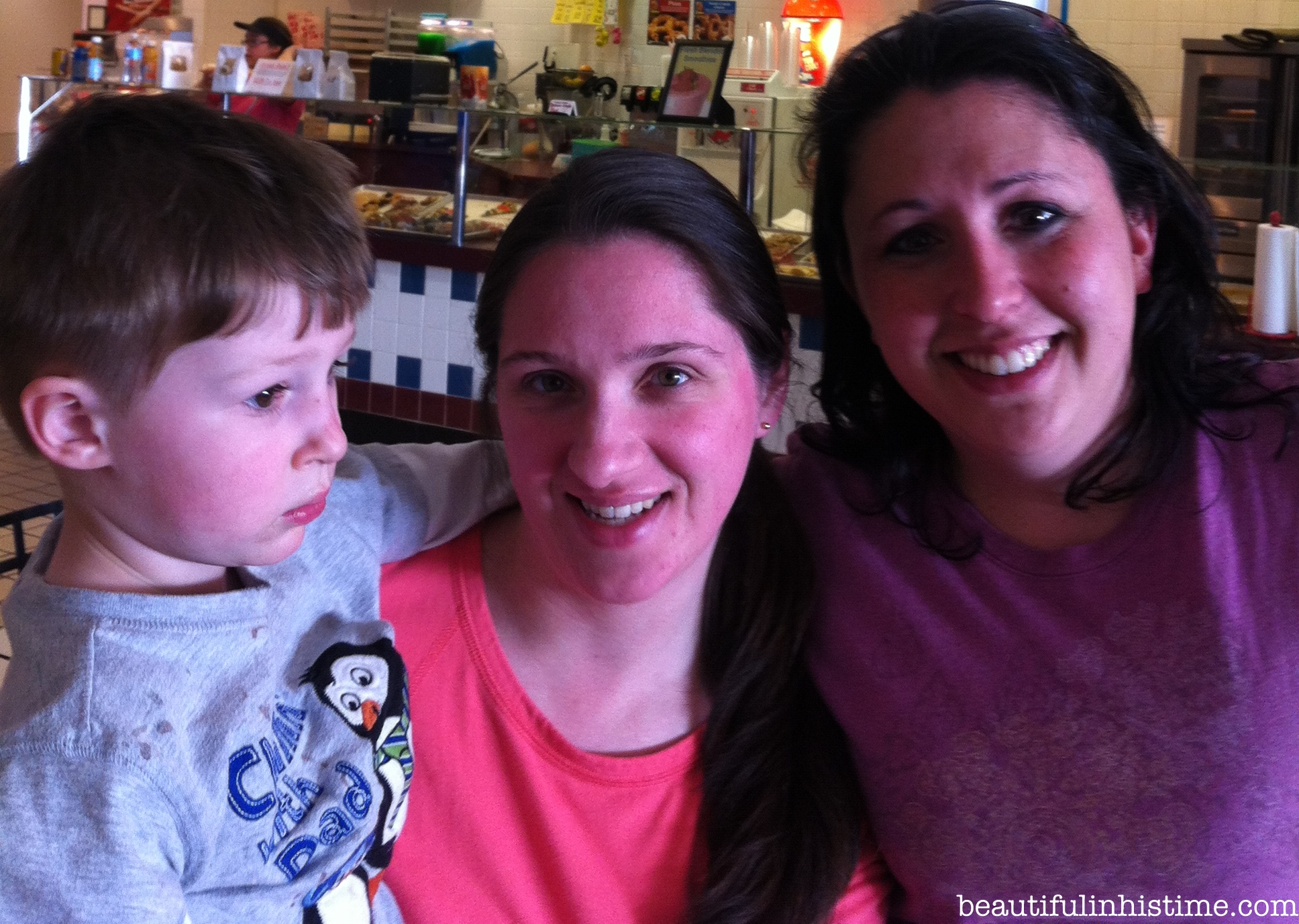 After spending our last Friday playing at the park and seeing friends, Saturday arrived and we went into panic mode with the last-minute preparations for moving. 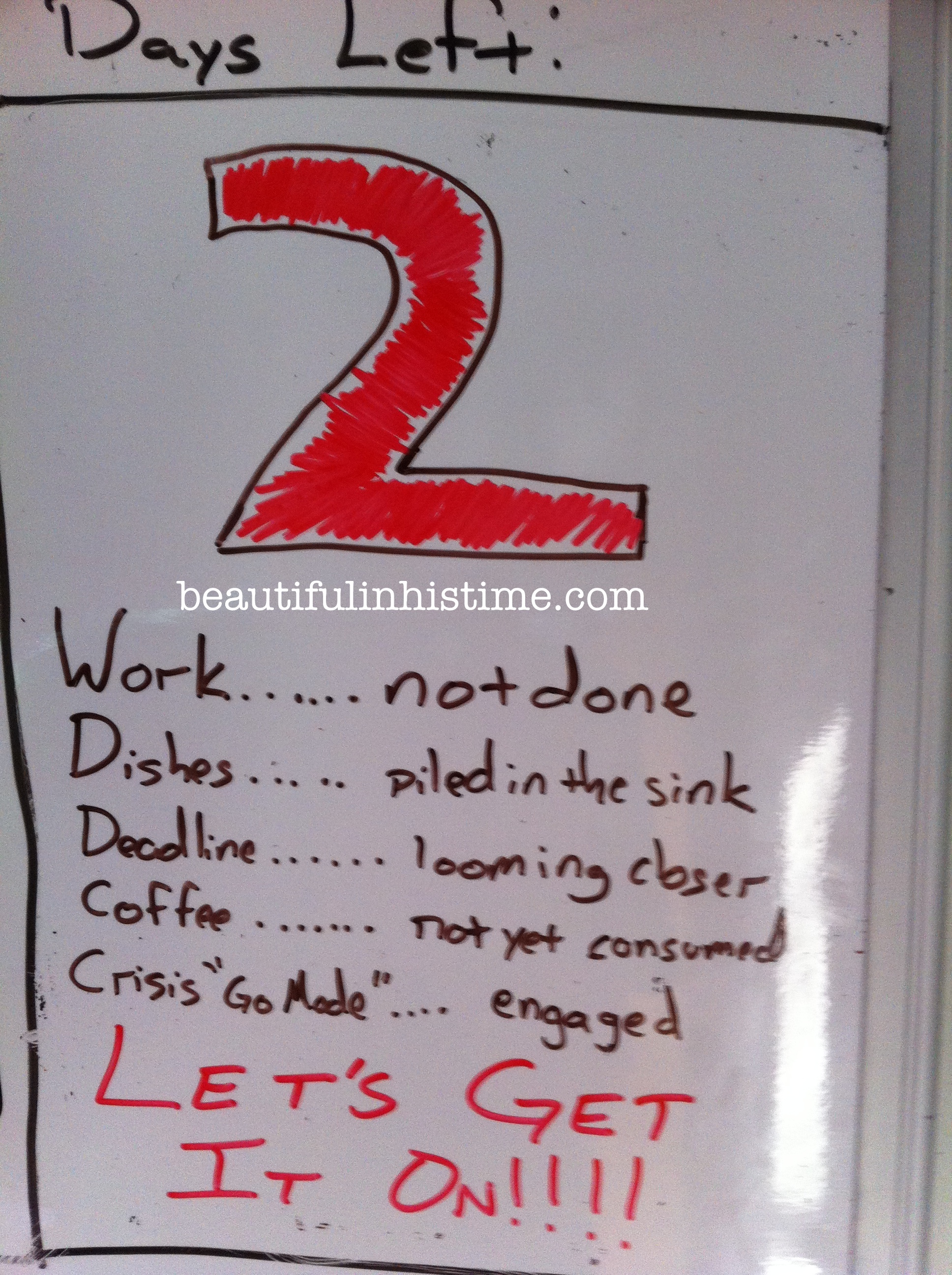 I probably would have gotten more done if I didn’t take time to do stuff like this: 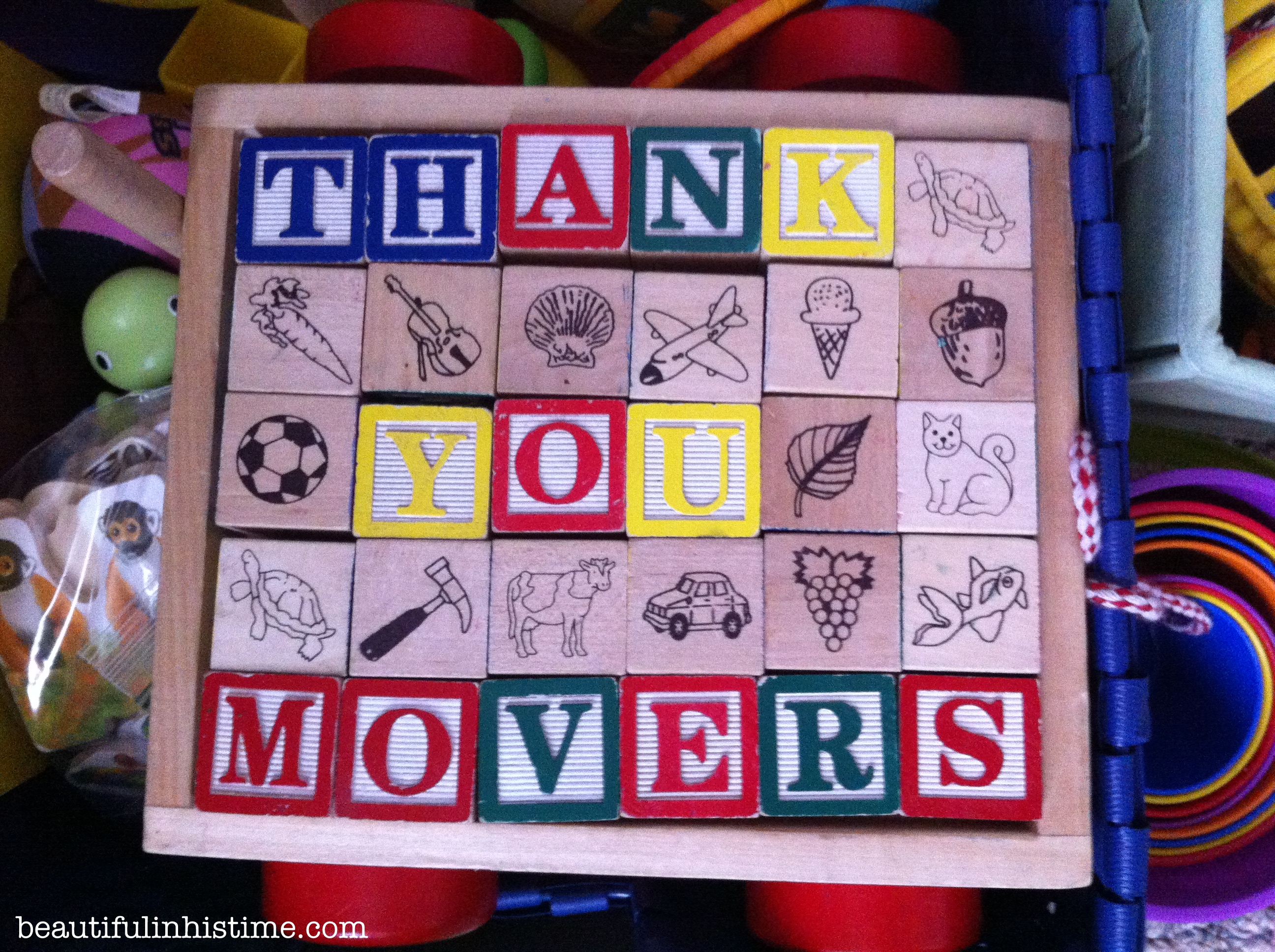 Sunday morning we went to our church for the last time: 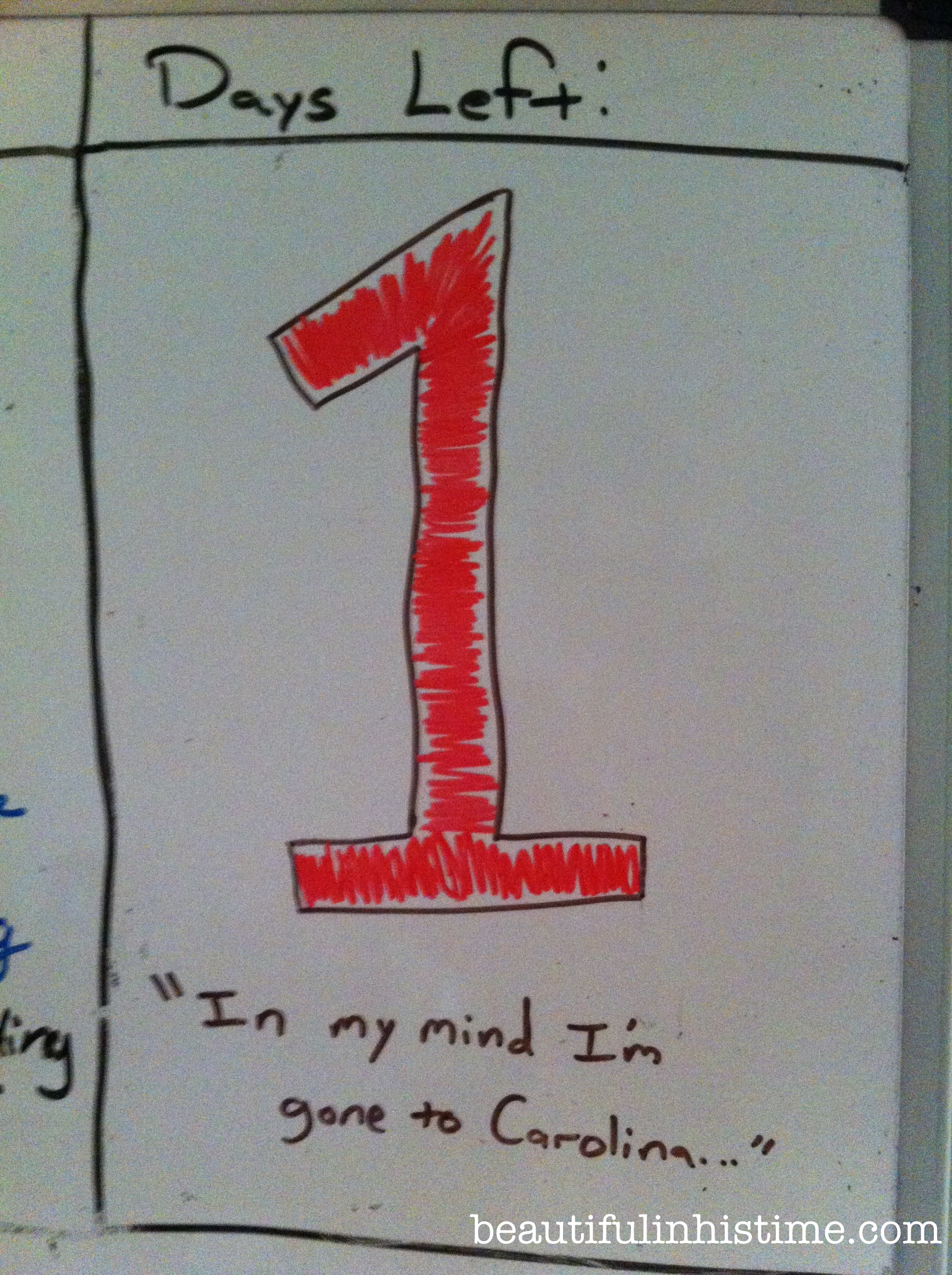 Then we spent the afternoon making food deliveries so our cold food and condiments didn’t go to waste.

First we stopped by Valerie’s – the best PWOC Intl roommate ever: 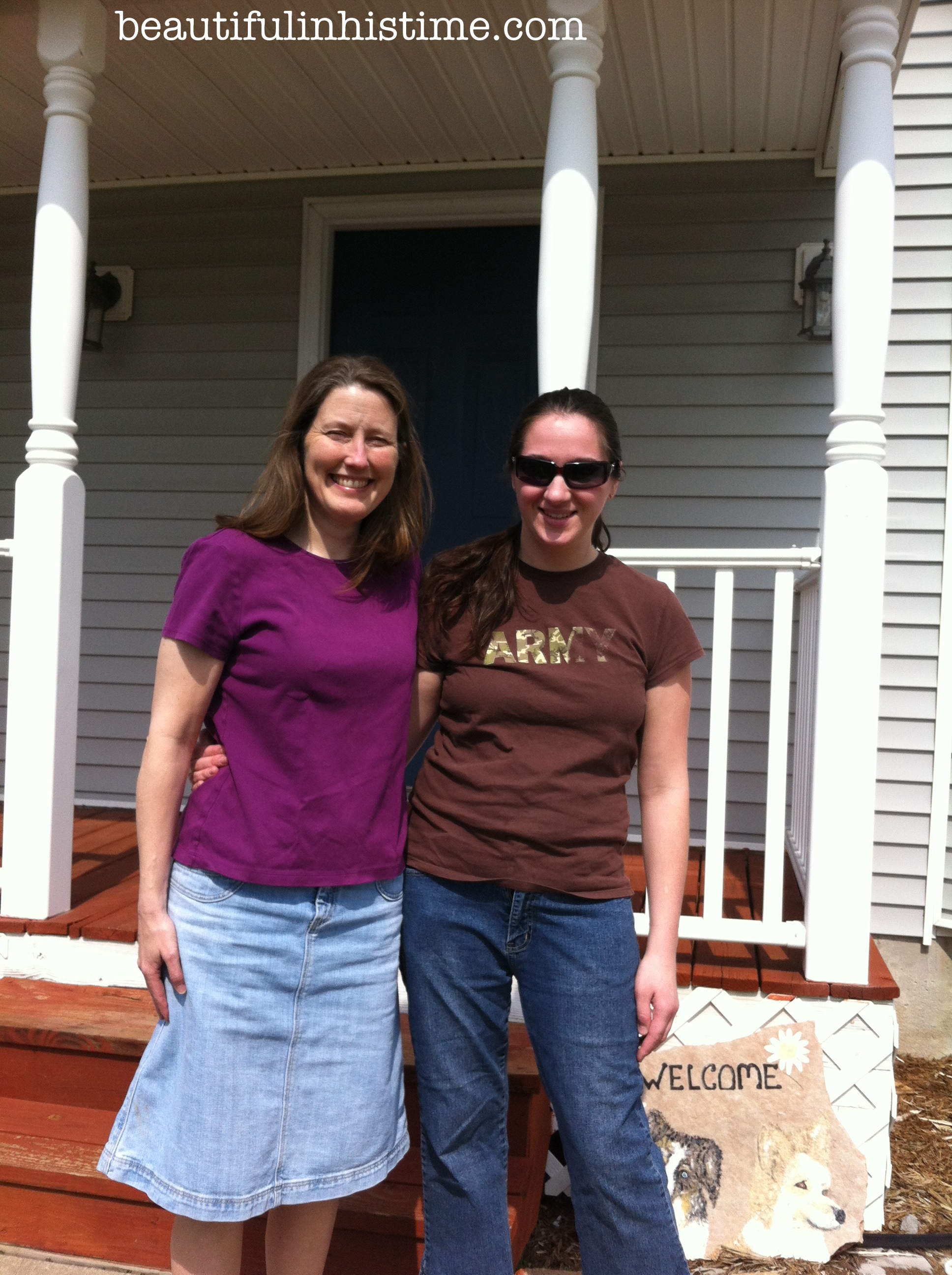 Then onto Stephanie’s. I met Stephanie at an Army Wives meetup at Applebees when I was about 16 weeks pregnant with Ezra. We happened to be sandwiched next to each other at this very loud lunch with what seemed like 20 women and 25 kids (it probably wasn’t that bad, I just remember it being so loud that she was really the only person I talked to.) I also had to leave early to go to a prenatal appointment so I didn’t have time to meet very many other people. I honestly don’t remember if there was anyone else at this meetup that I ever saw or kept in contact with again…I don’t even remember who hosted it! But I do remember her telling me the names of her children and that they had recently moved from Fort Polk. After that lunch we friended each other on Facebook. Three years and two kids between us later, we were still getting together for coffee dates and talking all the time on Facebook! I will seriously miss getting together with her!

Funny thing is that, in three years, this is the ONLY picture we ever took together! 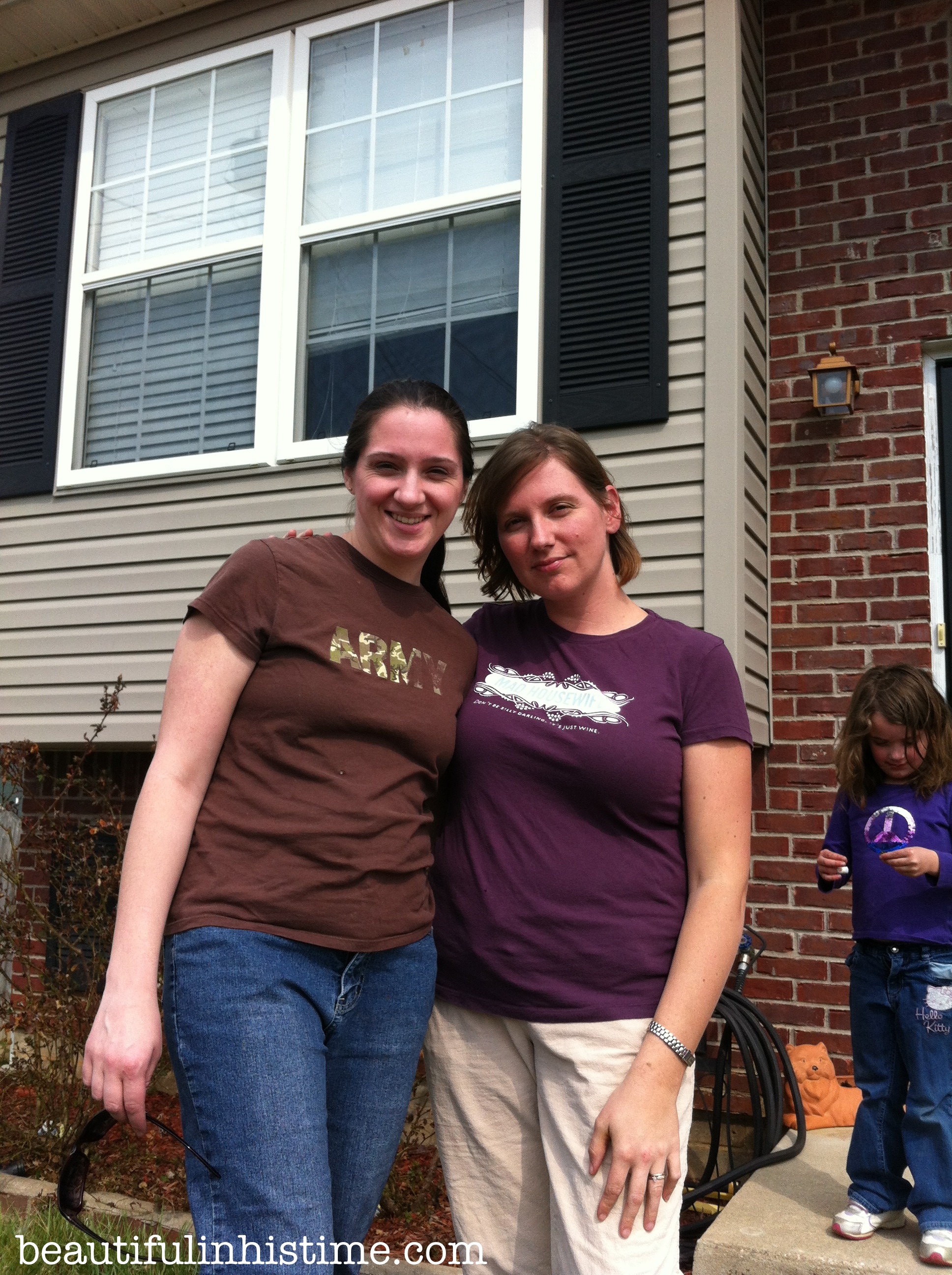 Looking back over the last 3 1/2 years, I feel so blessed to have met such amazing and wonderful people. There are so many people that deserve mention that I wasn’t able to see before I left town. Sometimes though…not getting to say goodbye is almost easier. I’m so thankful for Facebook that allows me to still be connected to all of my Kentucky friends, and the friends I met there that have already moved away to other duty stations.

Later on this week I’ll be sharing photos and details of our moving days, our trip down to North Carolina, and how we have gotten settled in here.