The day that we moved into our new apartment was probably the most difficult and hectic day of the entire moving process.

We had hoped that the movers would deliver our household goods on Saturday, as Russ was supposed to start his new job on the following Monday. Unfortunately, they had some issues with their truck and had to take the weekend for repairs, which meant that Monday would also be the day our things arrived.

My mother-in-law was also still out of town, so I didn’t really have many options as far as local help.

It was all on me.

I tried to be resourceful. I found an hourly daycare close-by where I could send Ezra for the morning. The movers said they would arrive between 0800 and 1000. I knew that they were rarely on time, and Russ didn’t have to be at work until 1000, so I made the childcare reservation for 0900-1300–knowing that at least one of us could take the time to drop him off, even if the movers were there.

I dropped Ezra off at the daycare, saw Russ off to work, then sat down on the floor of our empty apartment and waited.

I caught up on Facebook and some other internet stuff…and still waited.

Now I was faced with a predicament. Being that there is a 4 hour maximum on the daycare, I knew I wouldn’t be able to pick him up at 1300 because I would be in the midst of taking care of stuff in regards to boxes and moving. So I ran over to the daycare to pick him up before the movers got there.

This meant that I “wasted” two hours of daycare for no real reason and now he would be underfoot while the movers were bringing in all of our goods.

I turned on some Thomas for Ezra while we continued to wait for the movers. 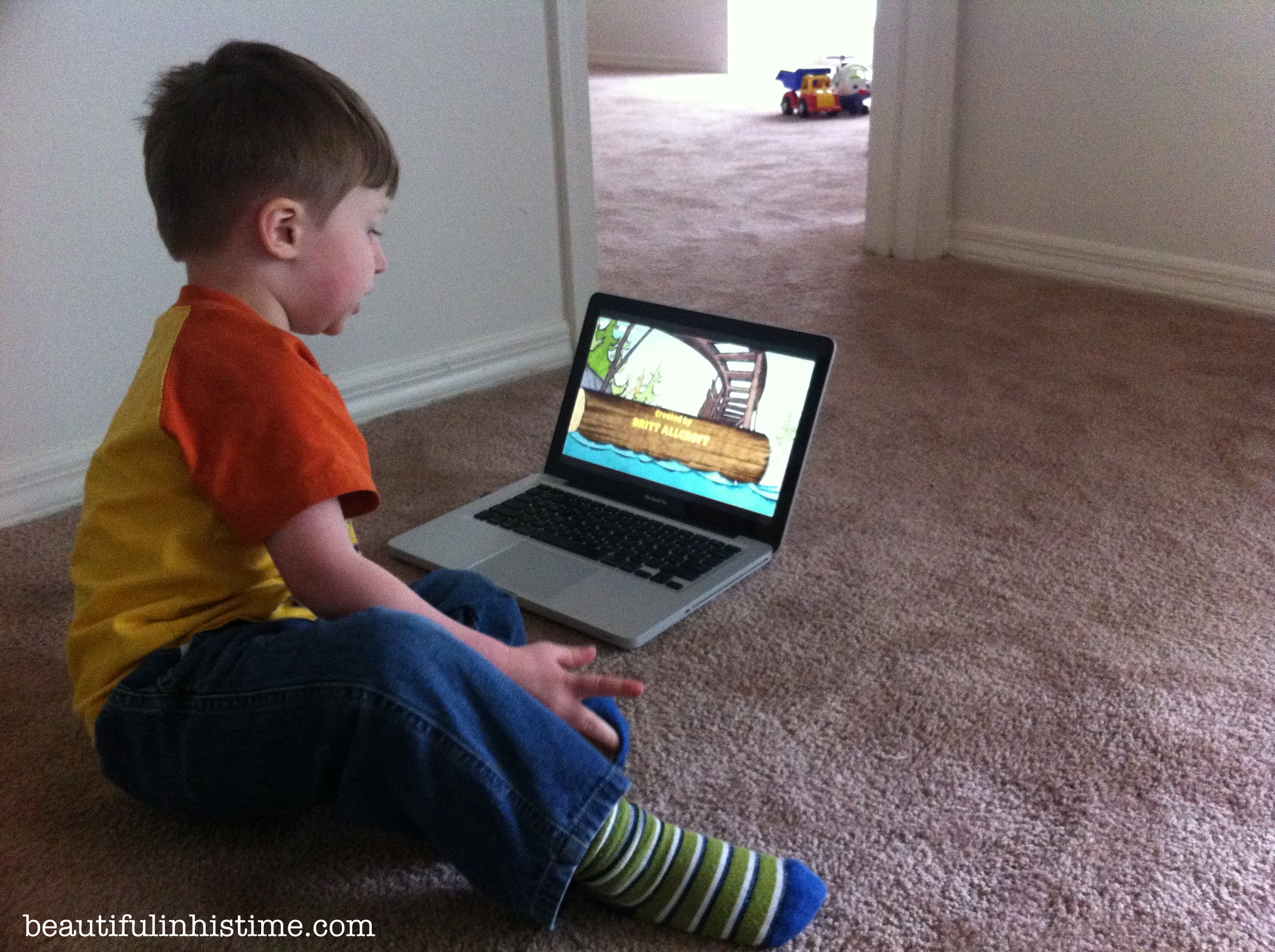 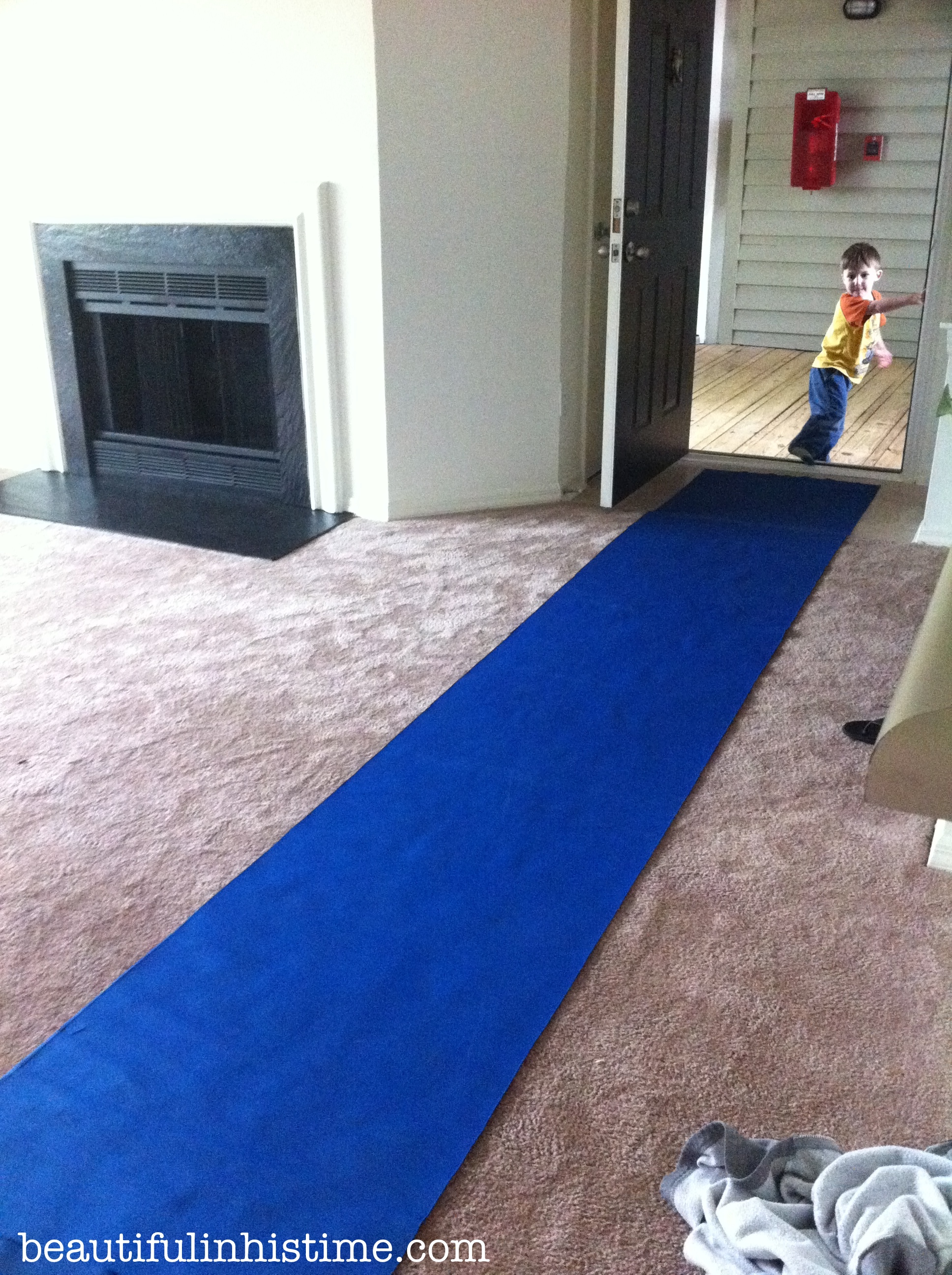 Then they handed me a sheet of paper with numbers on it. This is a part of moving that I had forgotten about because Russ did it last time – marking off the numbers of all of the items as they arrived. 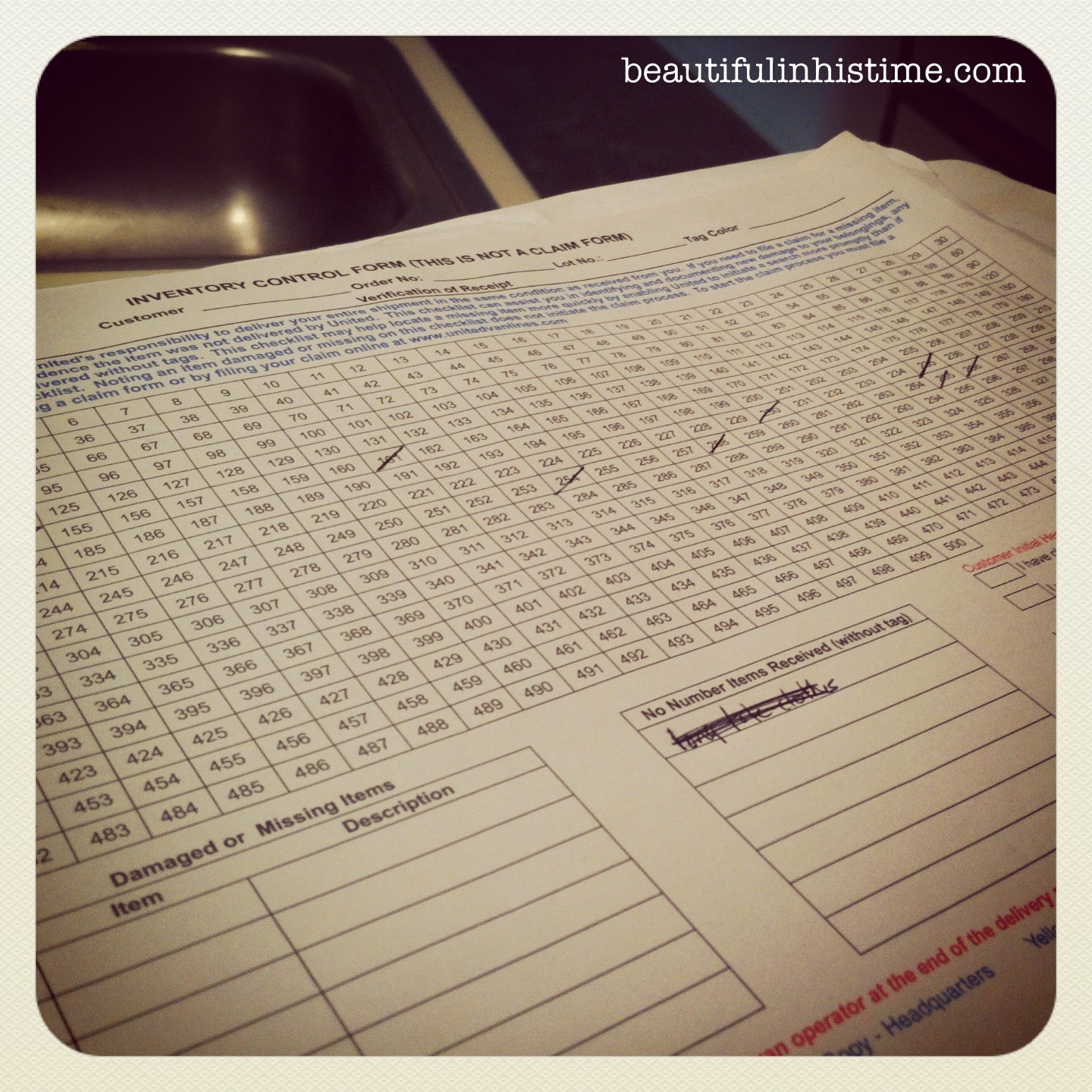 So now I was marking off numbers and trying to direct the men where to put all of the items as they came in, all while trying to keep the-two-year-old-boy-who-hasn’t-had-a-nap out of their way. Thankfully, one of the first loose items that they brought it was the Ergo. Even though I haven’t used it in months, I was tired of trying to chase Ezra around or hold him, so I put him in and wore him on my back for a while. 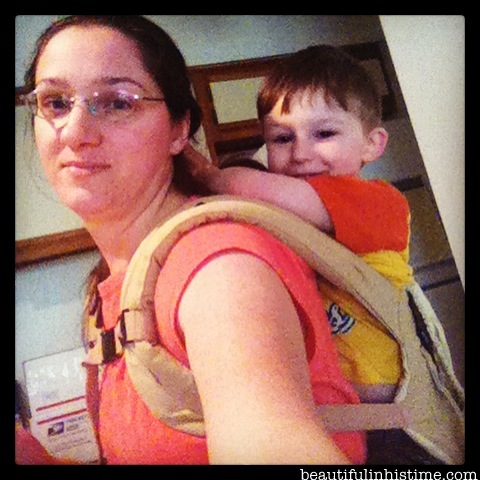 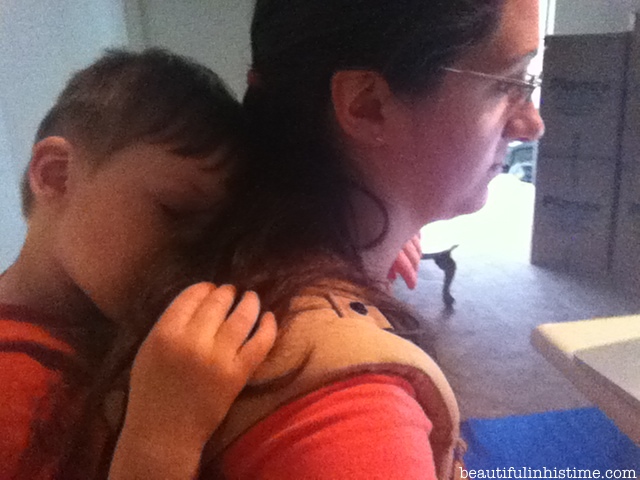 Once he fell asleep, he was even heavier, so I tried to lay him down in his room, which did not work.

So I went back to trying to keep him out of trouble without wearing him.

The movers seemed dubious about our space. That’s the one drawback about having the same movers on both ends of the move – they knew how much space we had before and exactly how much stuff was in it. They kept giving me crazy looks when I told them where things were going to go and told me that it probably wasn’t going to fit.

Our apartment had an interactive floor plan that I had used to plan out exactly where things would go and I knew it WOULD fit, but for about an hour there I felt like a crazy woman!

The other stressful part of the day was getting the washer and dryer moved in. There is a lovely, very compact space for them – the only problem is that it’s pretty much blocked in by the refrigerator. So I had to call apartment maintenance to come unhook the ice maker and remove the refrigerator from that section of the kitchen. (The movers couldn’t do this for liability reasons.)

The only problem with that is that to get the refrigerator out of the space it’s in in the kitchen, the doors have to be removed! 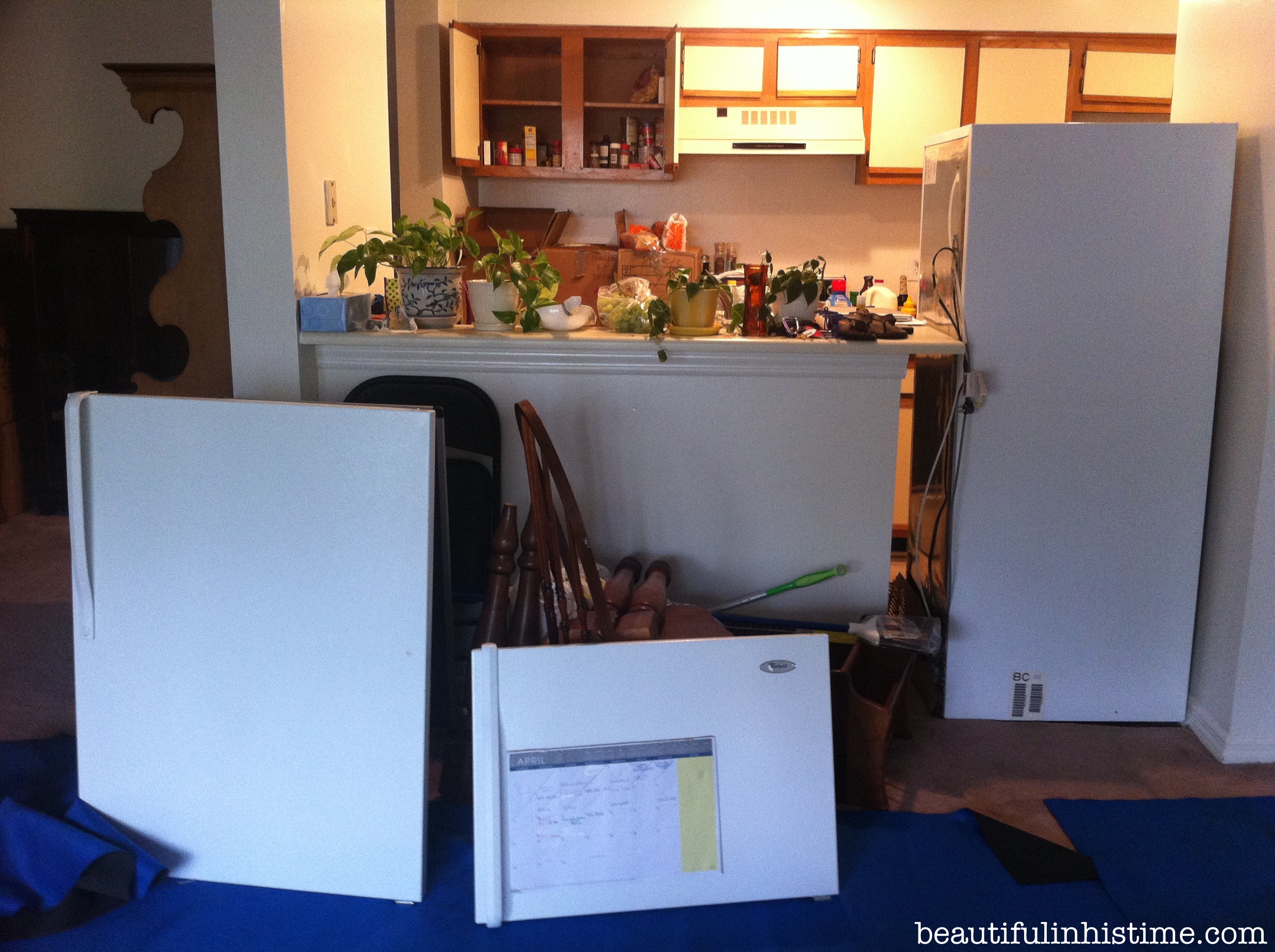 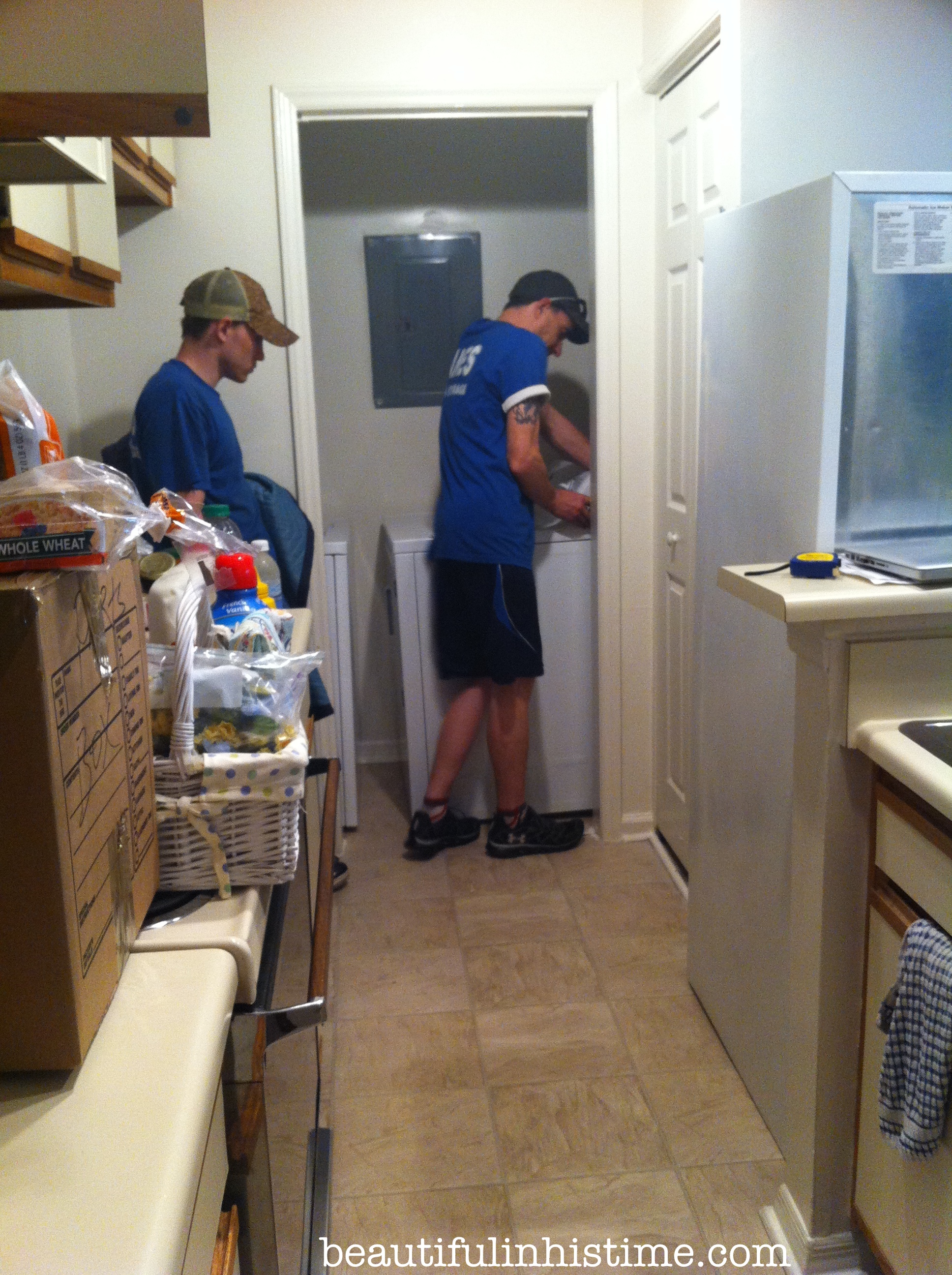 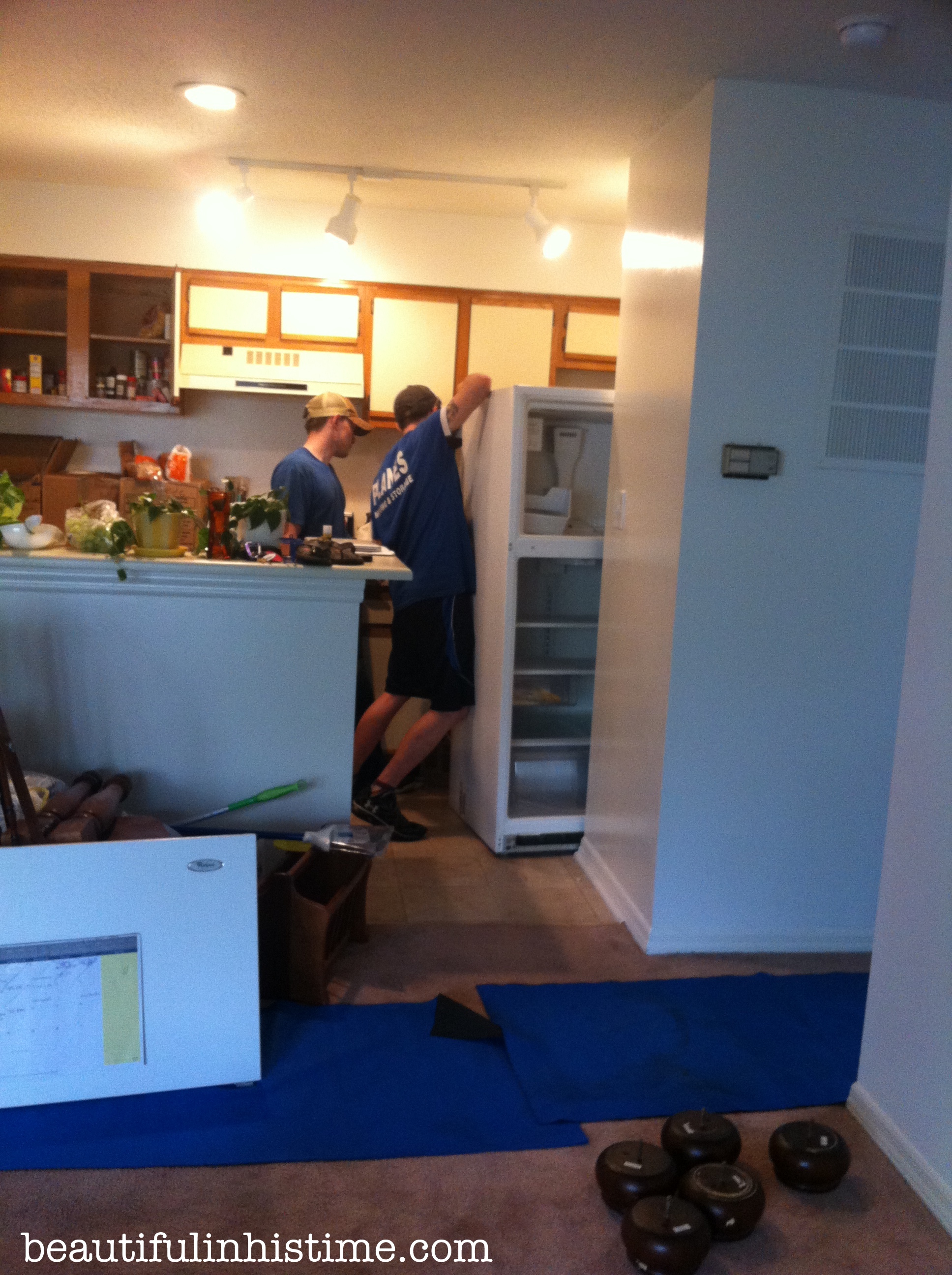 Our movers were none-too-happy about the arrangement, but at the end of the day, the kitchen was put back together and everything that I said would fit DID in fact fit…with inches to spare! 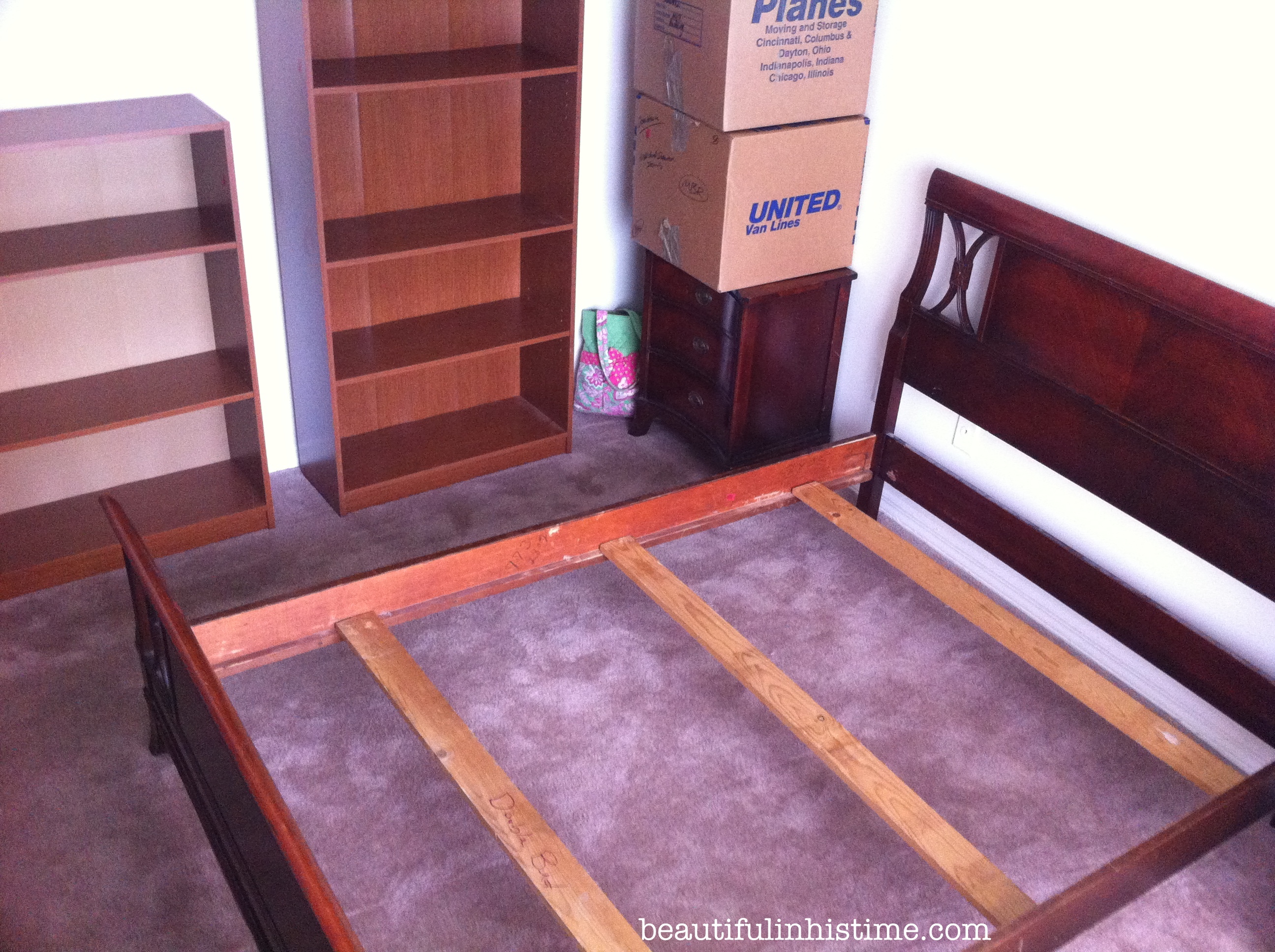 They looked at me sort of in shock and said, “Ya done good!”

I told you so…

The next few days were exhausting. Our apartment is small so there wasn’t a lot of space to move around the boxes. My goal was to unpack as quickly as I possibly good and get the space clear of boxes for good!

For a while every time I turned around I ran into this: 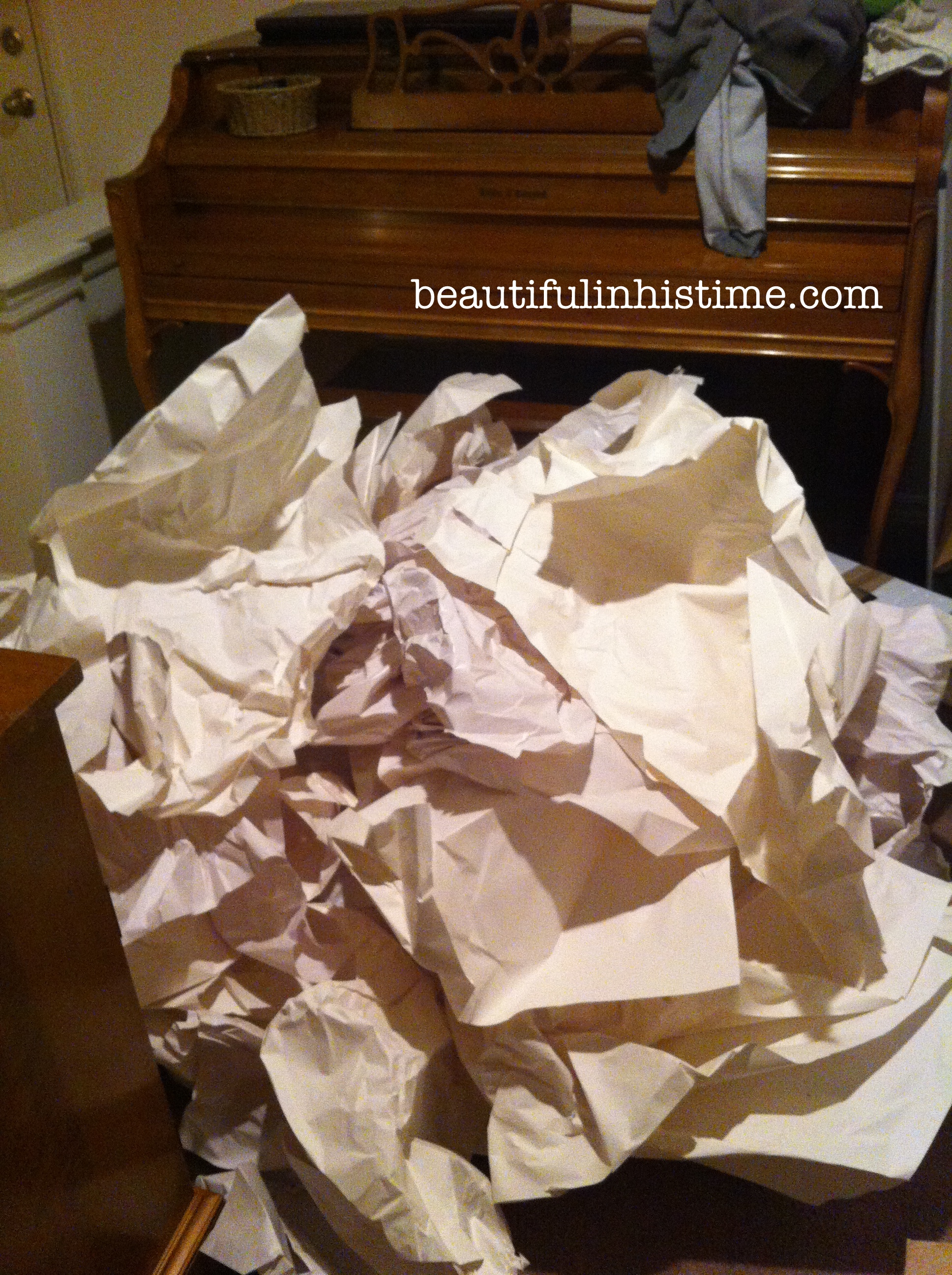 Most women would unpack the kitchen first. But there was no space even around the kitchen for all of the kitchen boxes – they were all out on the porch. So I unpacked everything else while working my way over to the kitchen boxes. I also was very dubious that things would fit in the kitchen and thought that we were going to have to purchase a pantry cupboard. But, God kept multiplying my space and eventually everything did fit without even needing to buy a pantry!

In the mean time, our first family breakfast (scrambled eggs) looked like this: 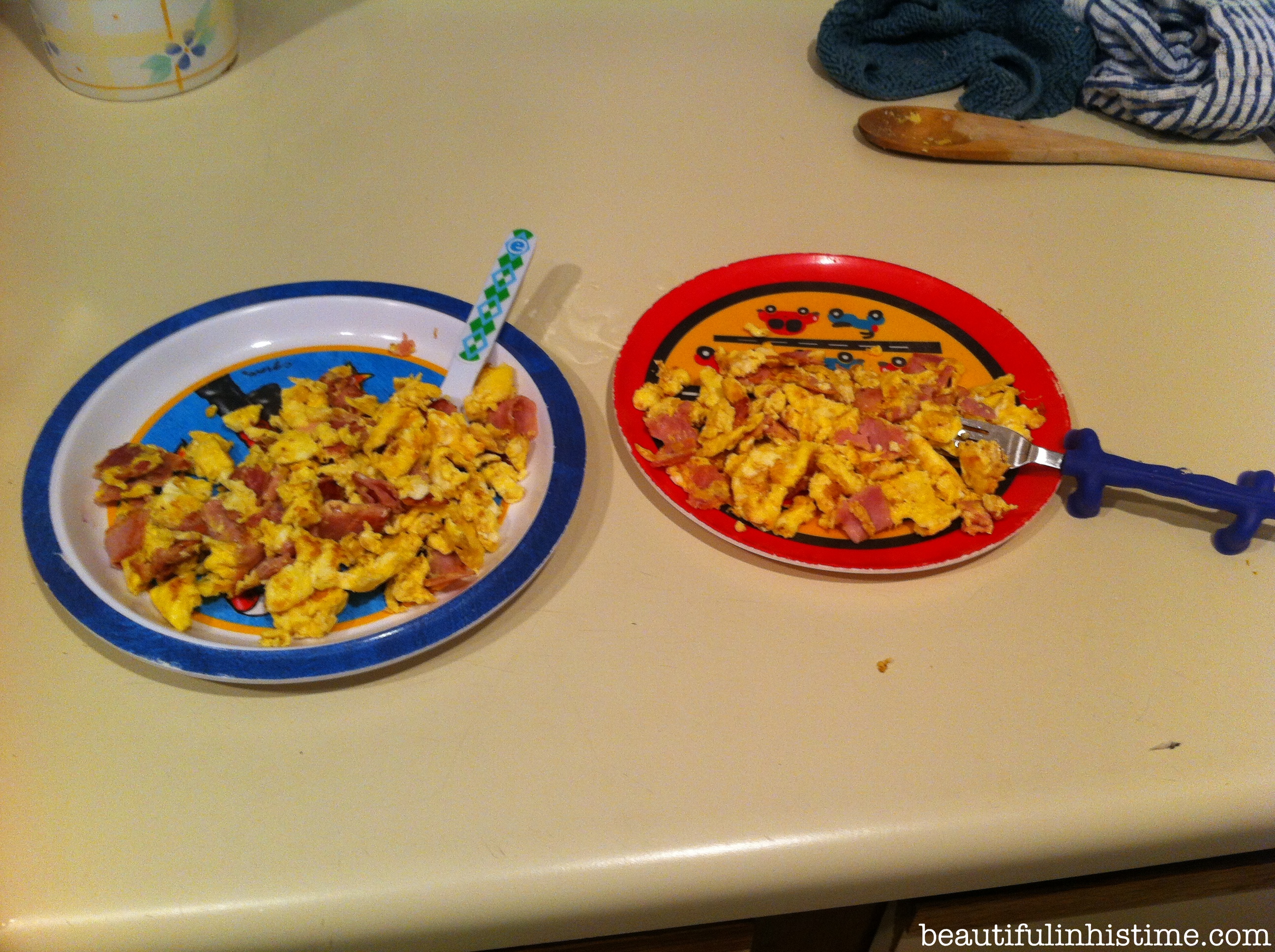 I guess you have to make to do with what’s unpacked.

My favorite part of unpacking was finding the pieces to my Keurig. 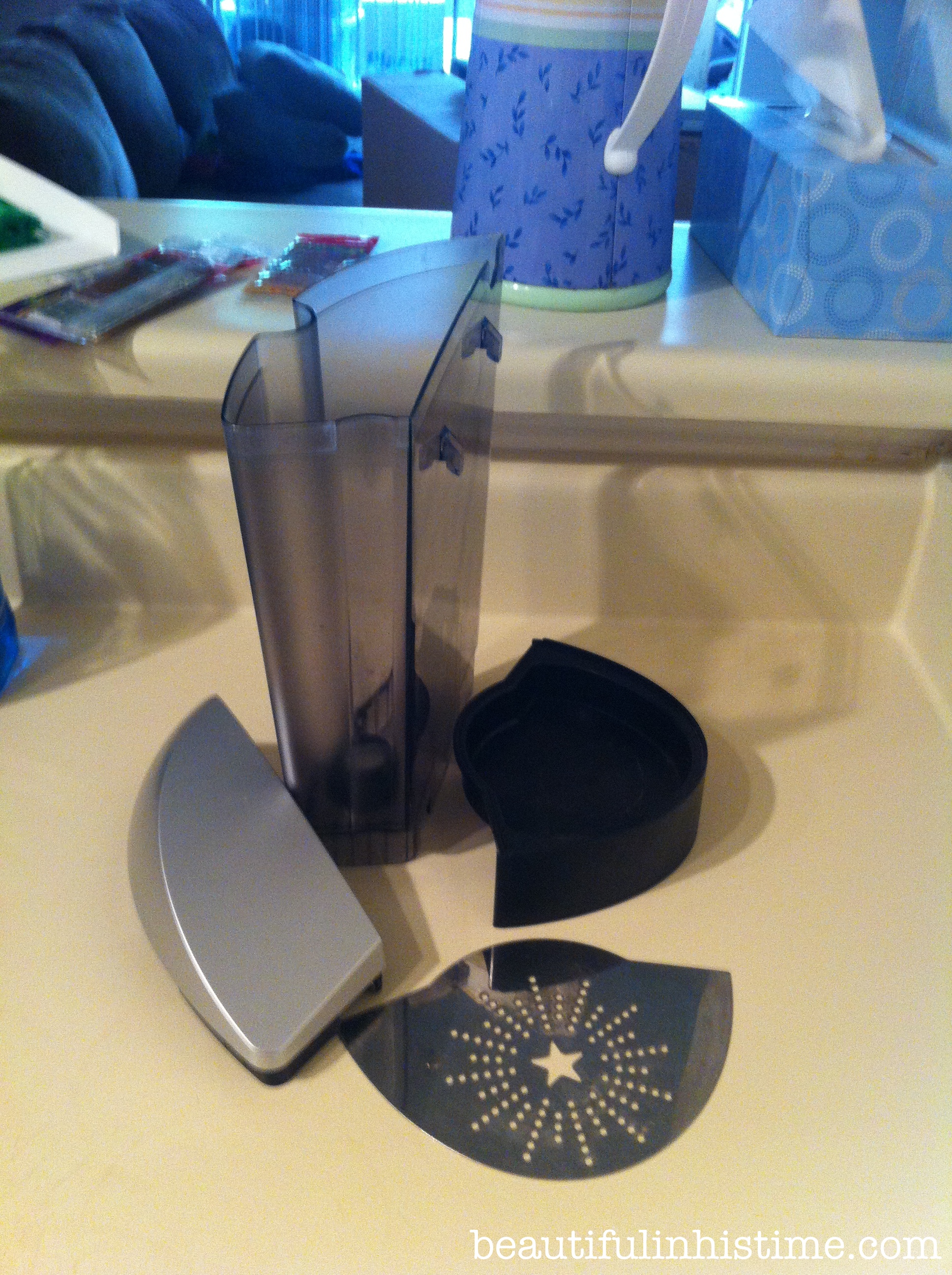 It took me two days and many more boxes to find the rest of the parts.

In totality, my Keurig was divided into THREE separate boxes!!

But eventually, I got my first cup of coffee: 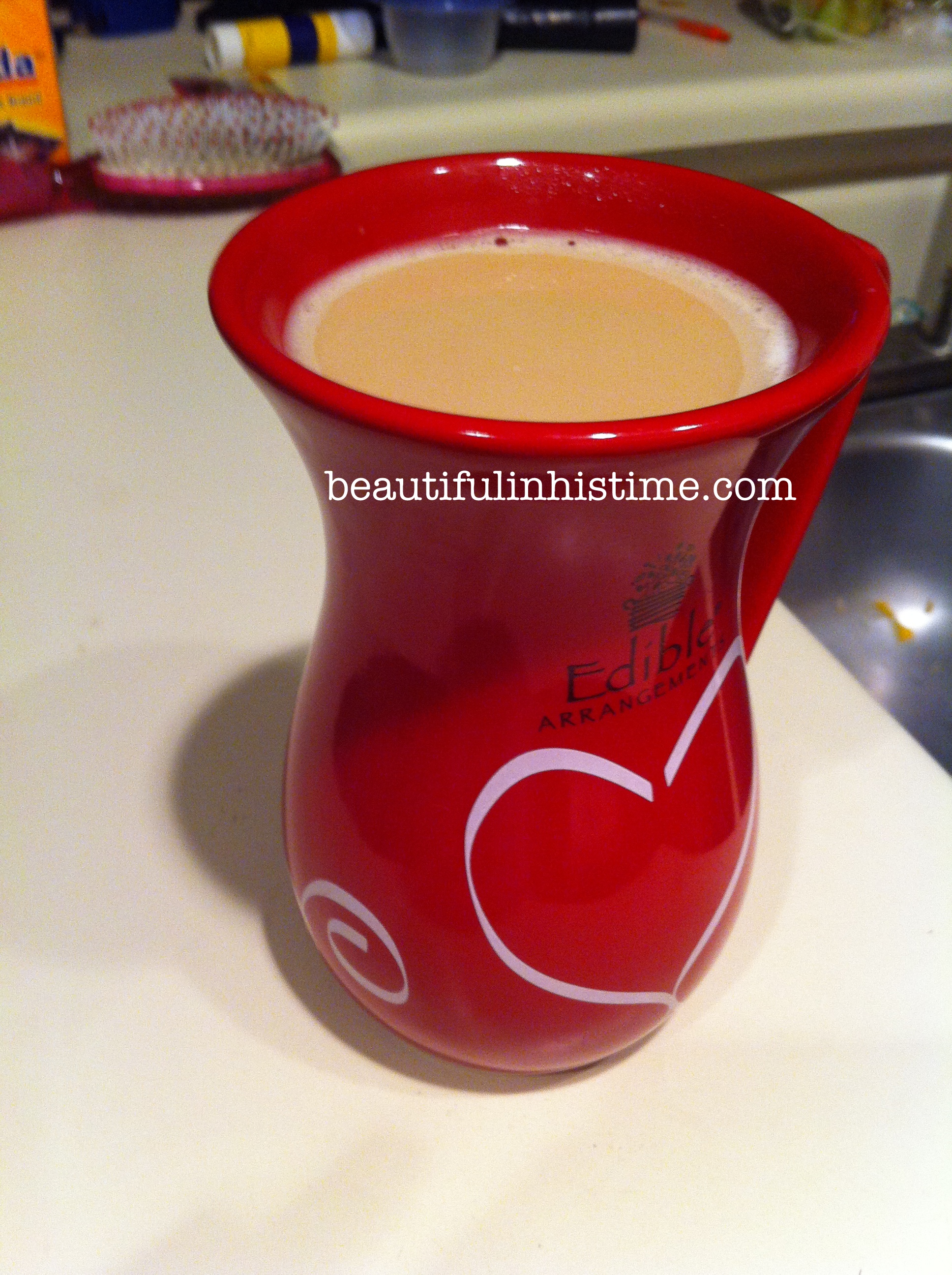 And, in the midst of all of the moving chaos, we got a picture of Russ going off to his second day of his civilian job! 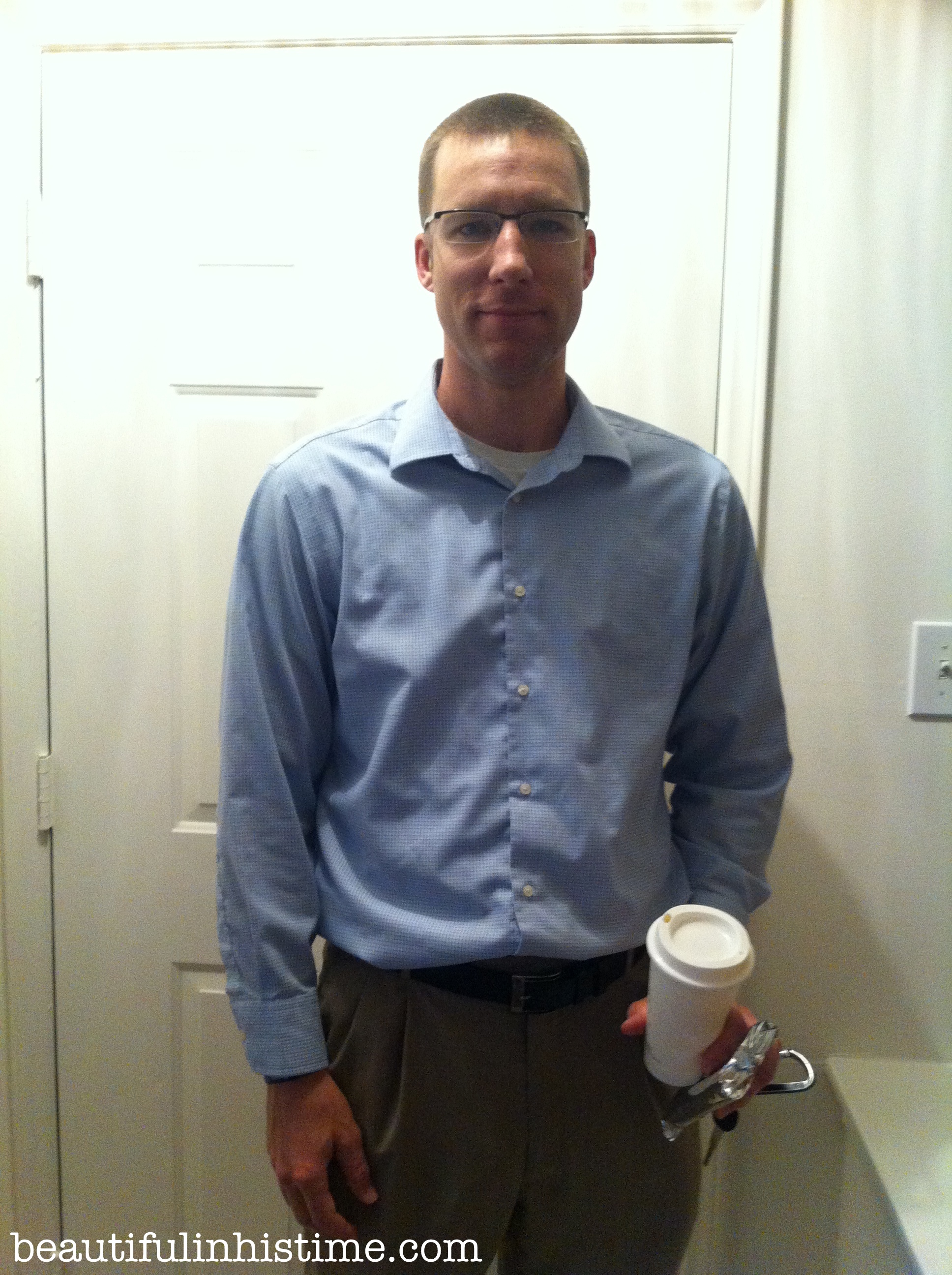 All in all, moving was a fairly smooth experience. But it was also hugely exhausting. We have been here a month now and yet I still feel like I’m still recovering from all of the adjustments. I’m trying to show myself a lot of grace as it just takes time to go through all these life changes all at once!