Our family calls it “the special store.”

We have gone there for potty-training reward outings, special daddy-son dates, and on days like today: when the park is too hot, Barnes and Noble is too small, the play-place at the mall has gotten old, and everything else is too expensive.

It’s big enough to run around in, but not as packed as Walmart. 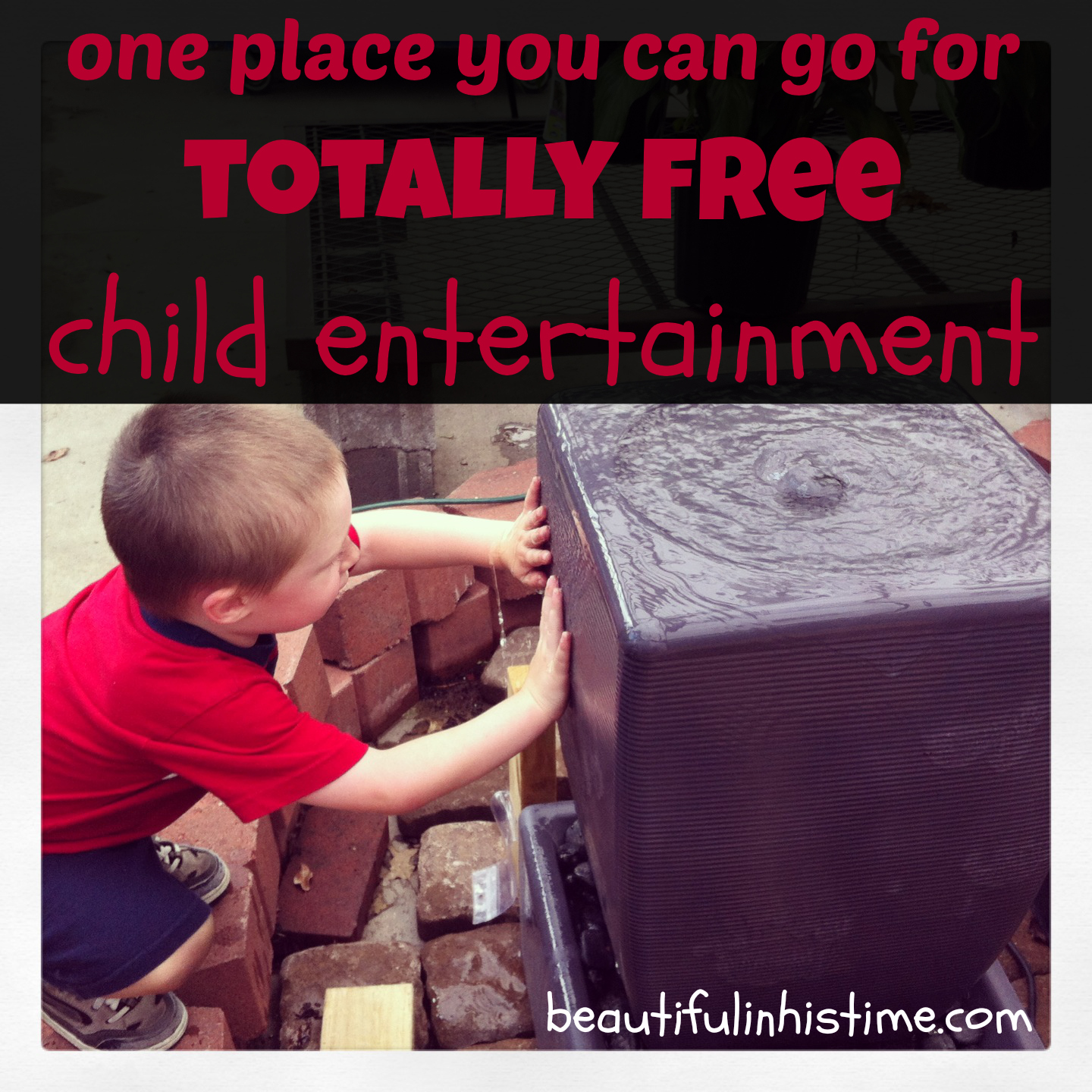 There’s only one rule: you can’t go here when you actually NEED to shop or make decisions about appliances or DIY home-improvement. (Then “the special store” simply becomes “the torture store.”)

Today, we started off with the tractors that were right out front: 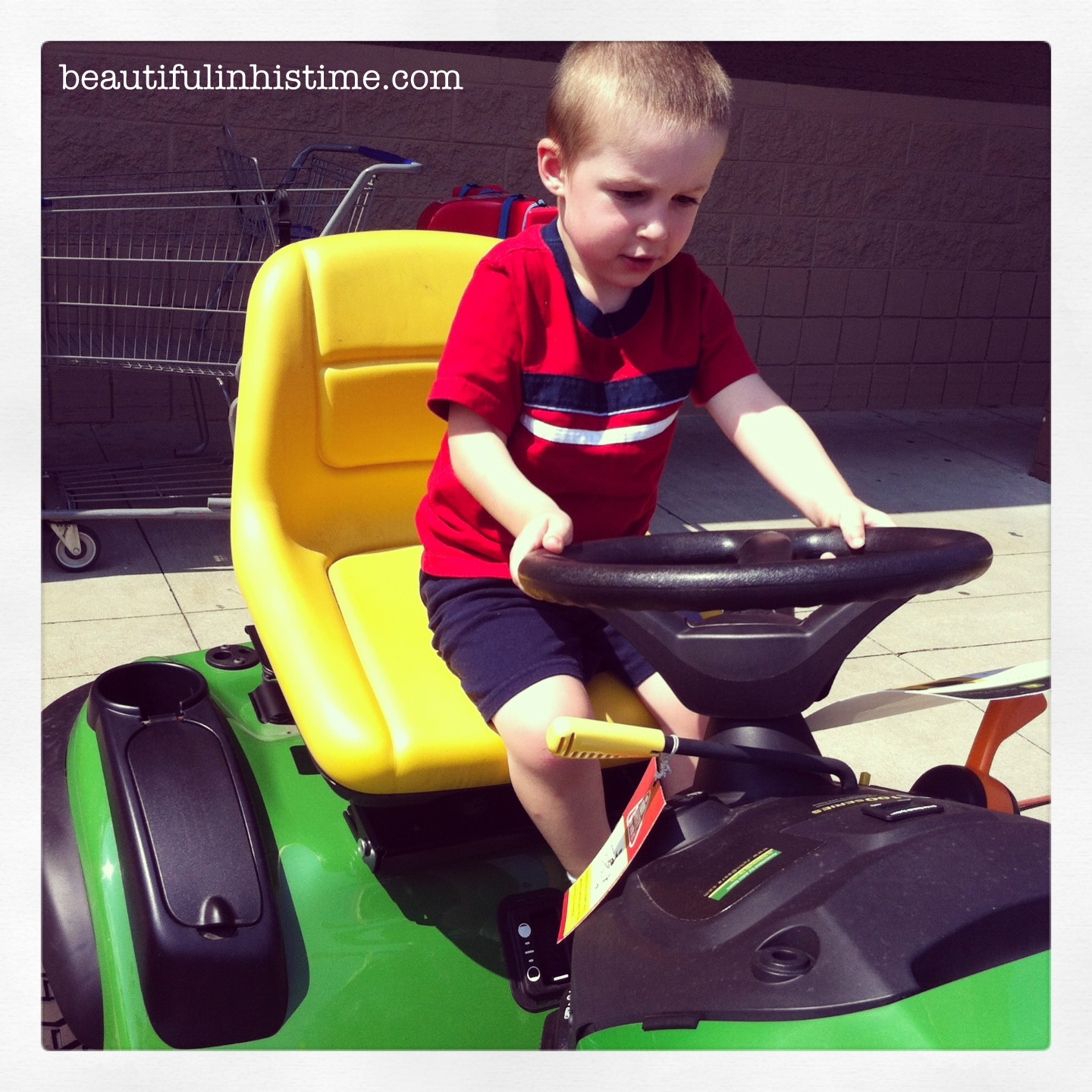 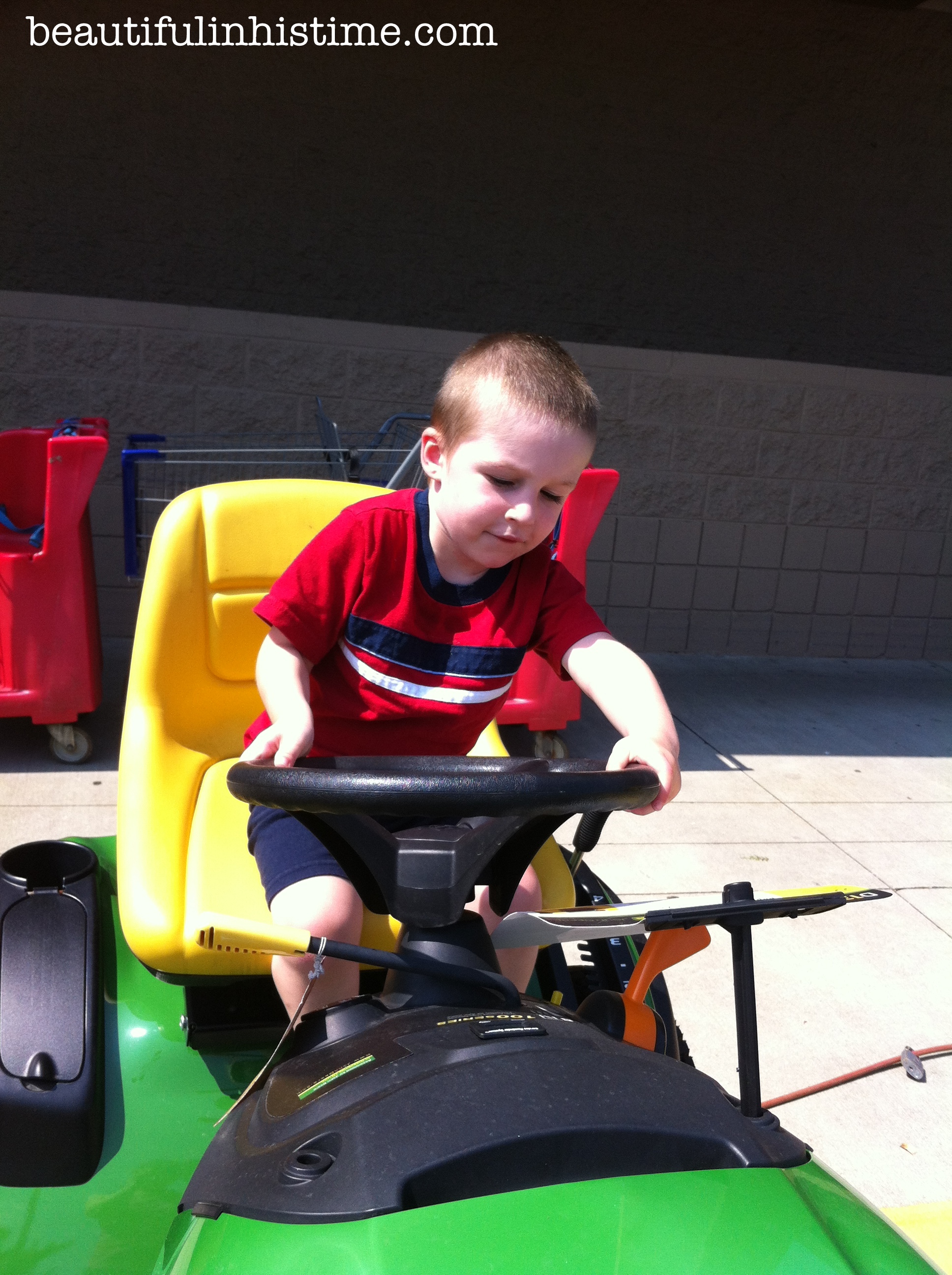 Then to the porch swing sets, also out front: 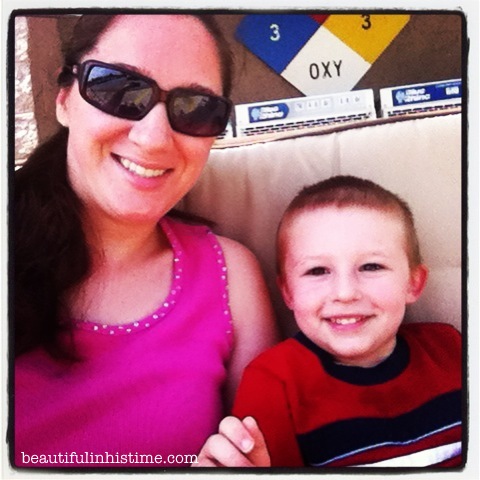 Ezra recognized that the swing frame made a triangle. (Preschool for the day? Check!) 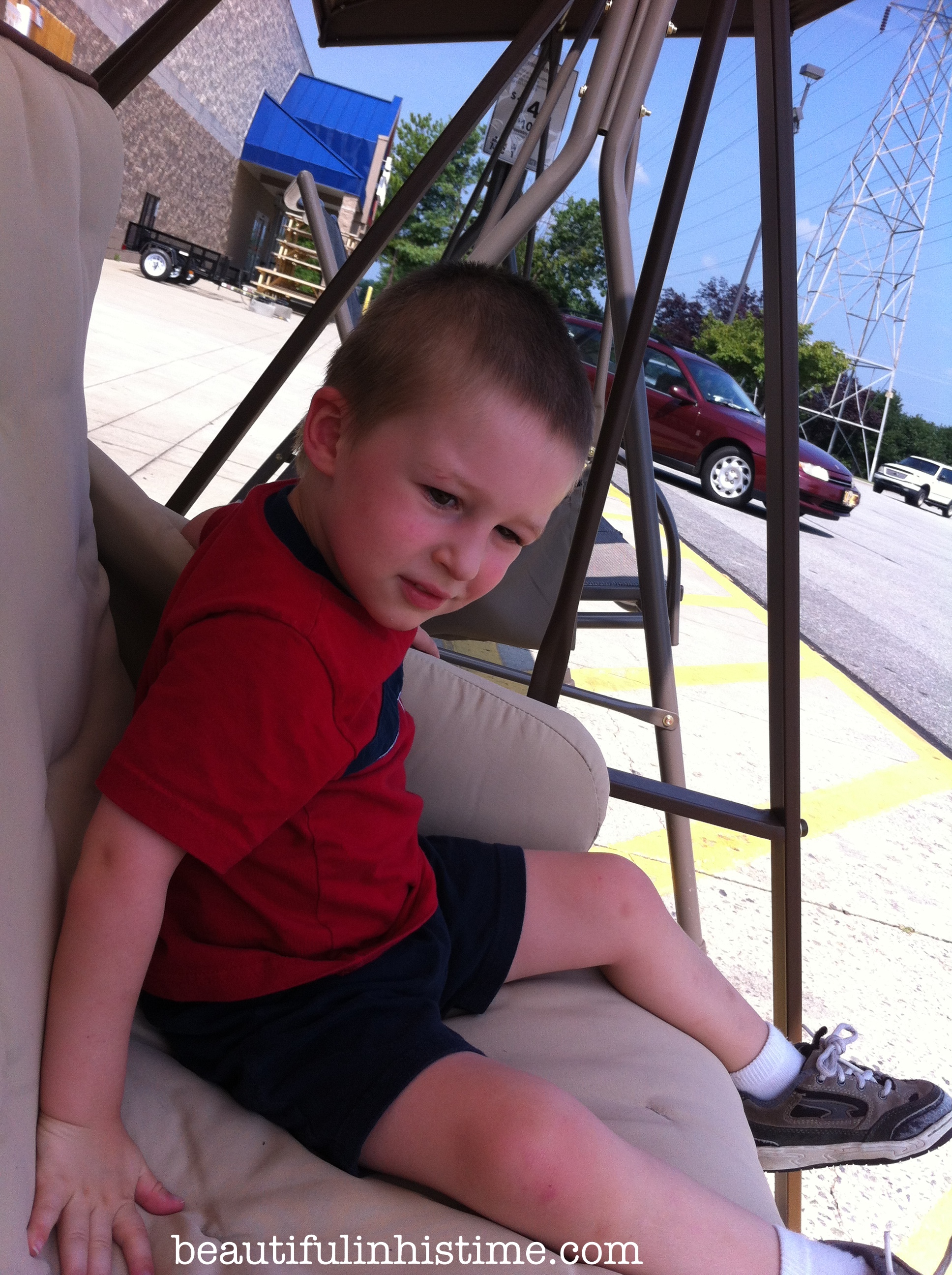 Then I got a phonecall, which I needed to take. So I quickly dragged Ezra into the store so at least I didn’t have to worry about him running into the parking lot. He immediately grabbed two flashlight packages and started trying to play “stop and go” with every person we saw, while running up and down the aisles, while being chased by the-mom-on-the-phone. (I didn’t get pictures of this part, sorry folks.)

Then we rode a “choo-choo train”: 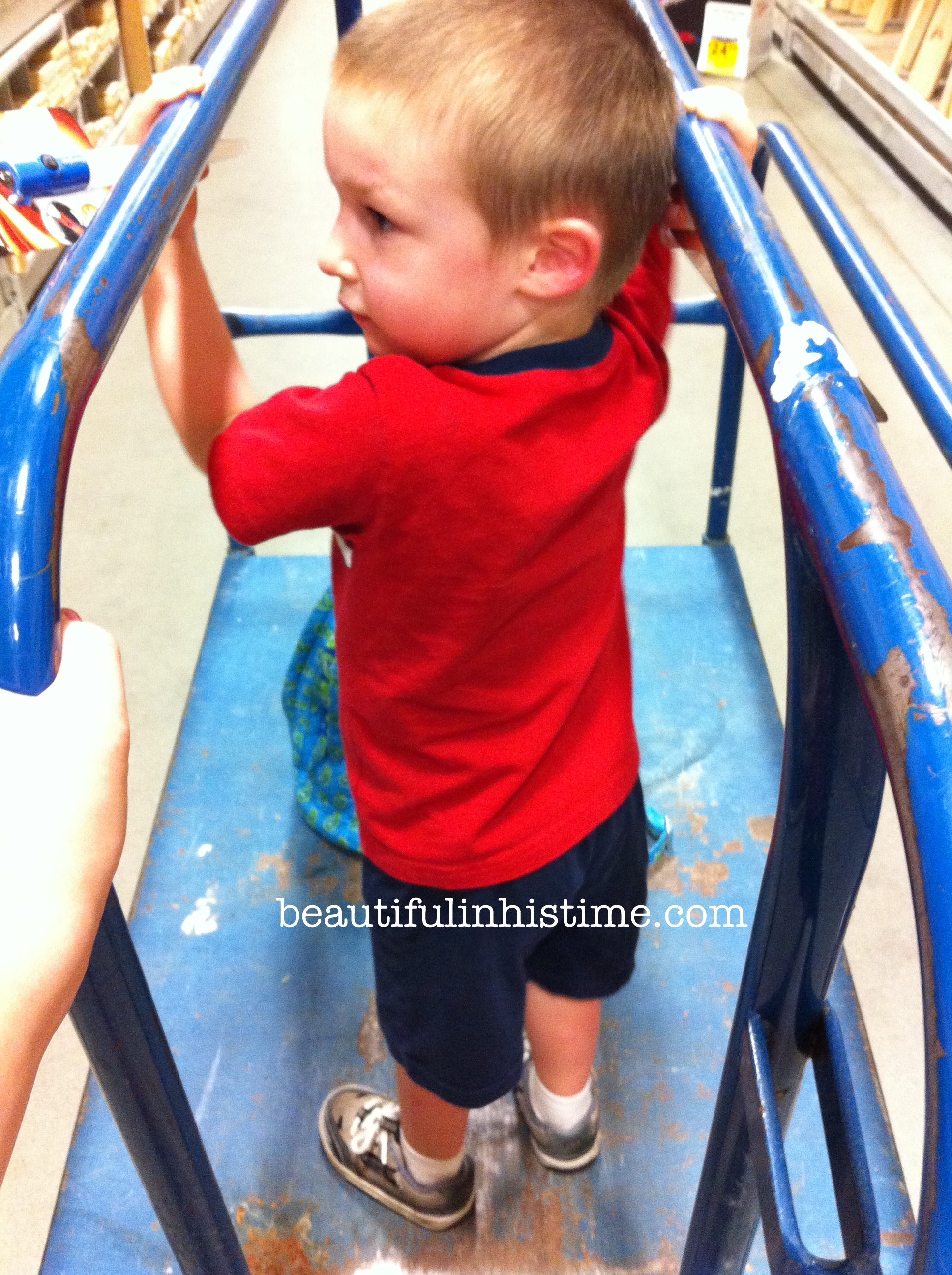 And played with windows: 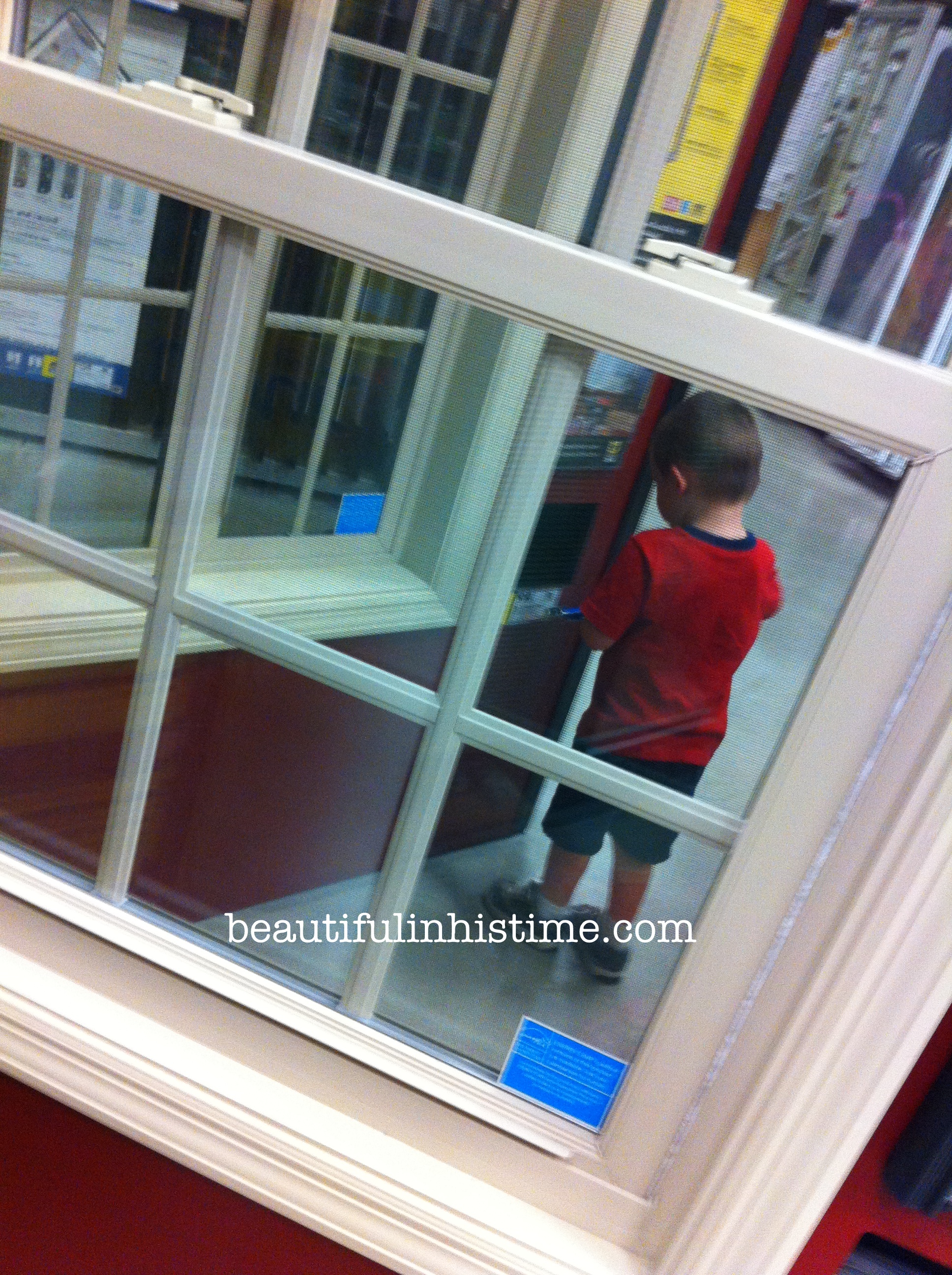 Apparently, the lock-crank-or-whatever-it-is for this window resembled a cell-phone. So we called Daddy: 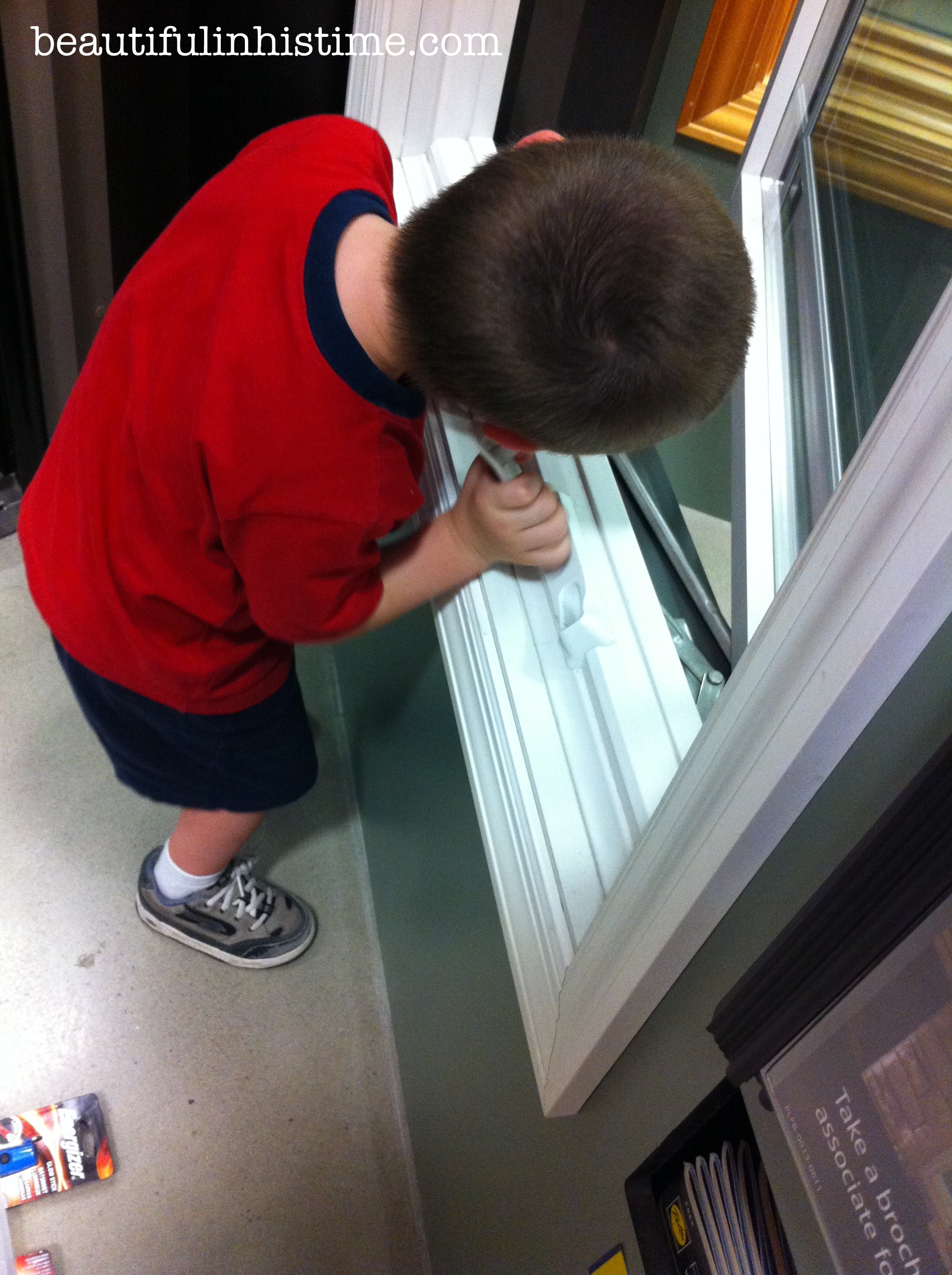 We grabbed a big blue bucket on our way to the paint department, where mom was going to pick up her paint samples for the color sorting activity that she saw a few months back on Pinterest.

We picked out a few paint colors together, then moved to the other side of the paint department to get more, trying not to look too obvious that we were grabbing up paint samples of every different color they had. Mom kept grabbing while Ezra entertained himself with stacking. 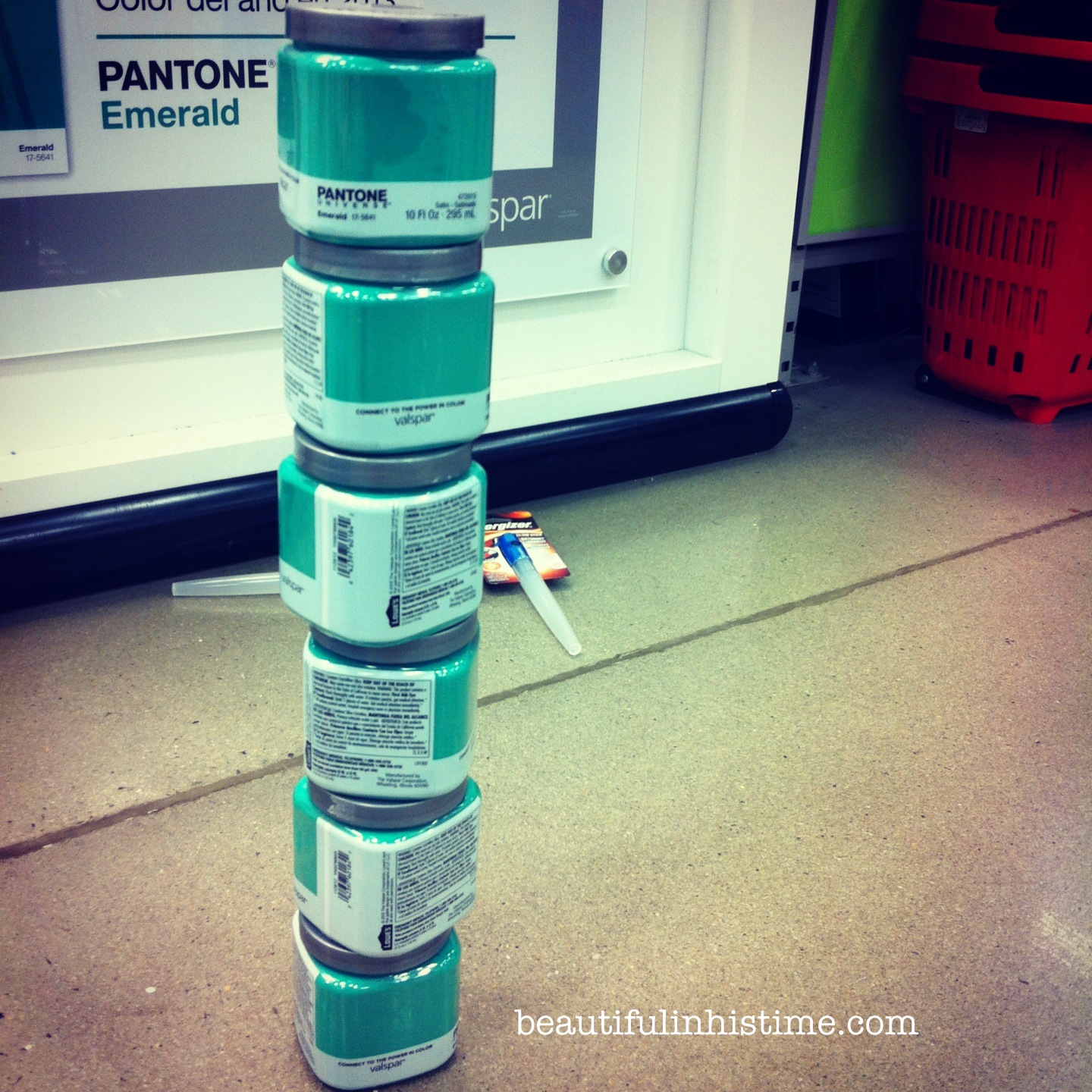 I should have known that this wouldn’t end well, but I was just so proud of the stacking, that the fact that he was stacking paint simply didn’t register as a potential disaster. Law-tee-dah, he’s entertaining himself, back to stealing more paint samples.

Two seconds later I heard crying and turned to find this: 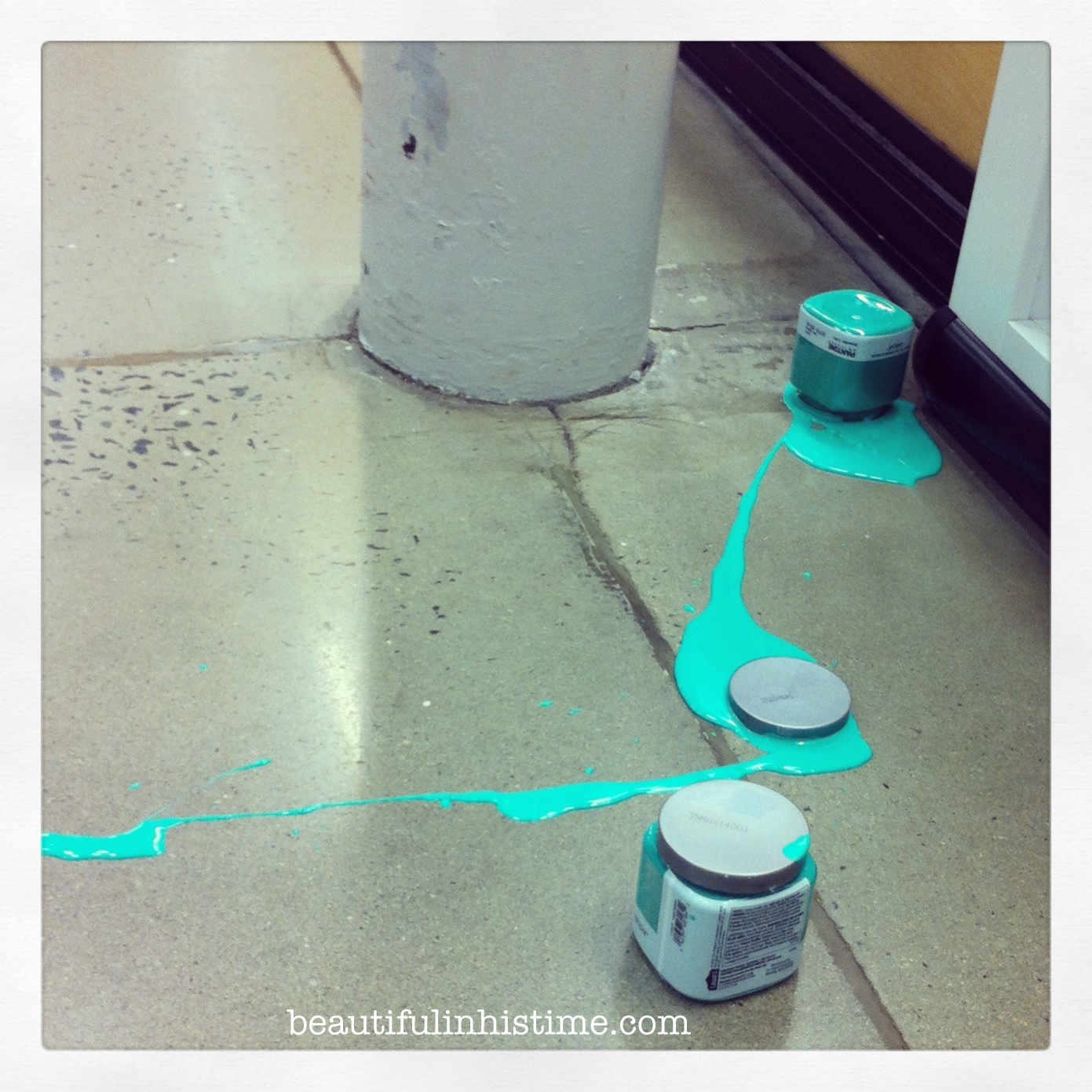 Little man was rather distraught. I comforted him while at the same time guiding him away from the paint as well as inconspicuously trying to get my handful of paint chips into my back-pack pocket – and looking around for someone to show us what to do with the paint.

We apologized and offered to help clean up, but they said, no, they would handle it.

We scooted away as quickly as possible and ran down an empty aisle toward the appliances, where we opened ovens and refrigerators and played house in the kitchenette displays.

Then we got another phonecall – this time from Daddy who was on lunch break. I talked while chasing Ezra up and down aisles, redirecting him away from ladders, pushing him again on the “choo-choo,” and watching him get filthy climbing in secret places behind boxes on the endcaps of aisles.

Finally, I corralled him into a bathtub, where I stood next to him and finished the phonecall while he played. By this point I had pretty much given up on looking inconspicuous. 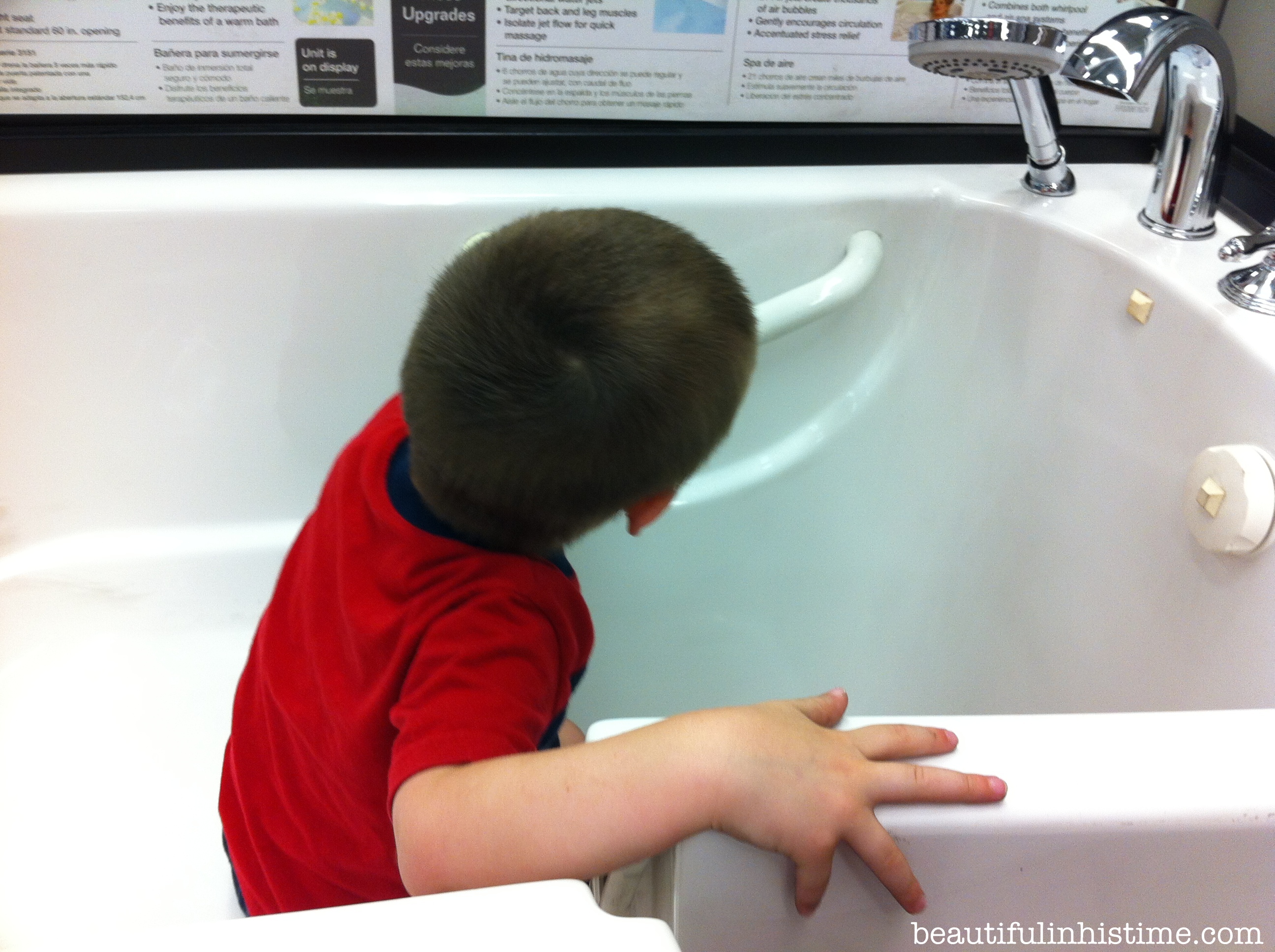 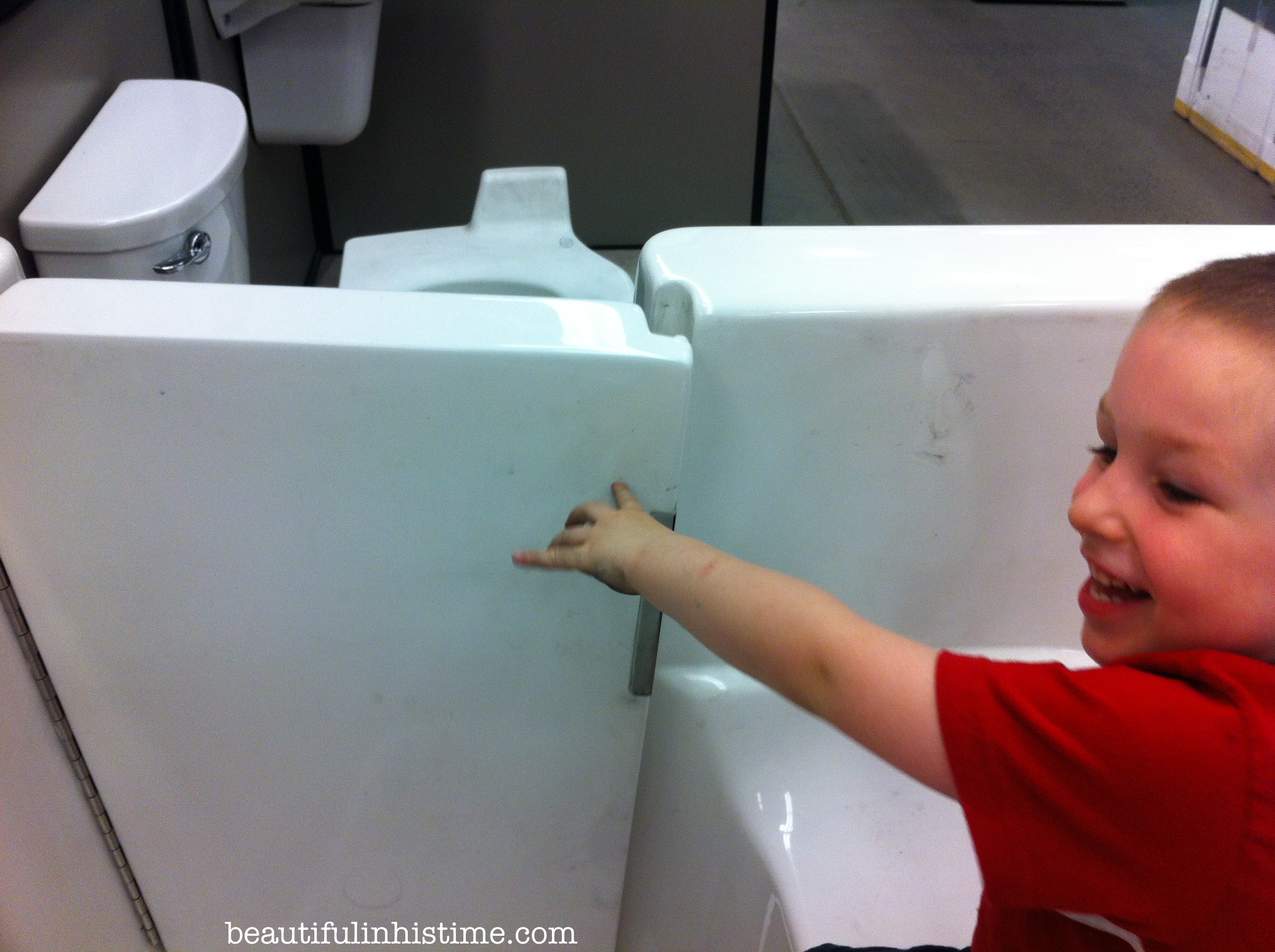 I got off the phone, then tried to direct Ezra another direction, but he wasn’t having it. He wanted back in the bathtub. Commence temper tantrum in the middle of the aisle. (Sorry. No pics of that either.)

I finally got him settled and distracted him by going out into the garden section. Where he got a wagon ride: 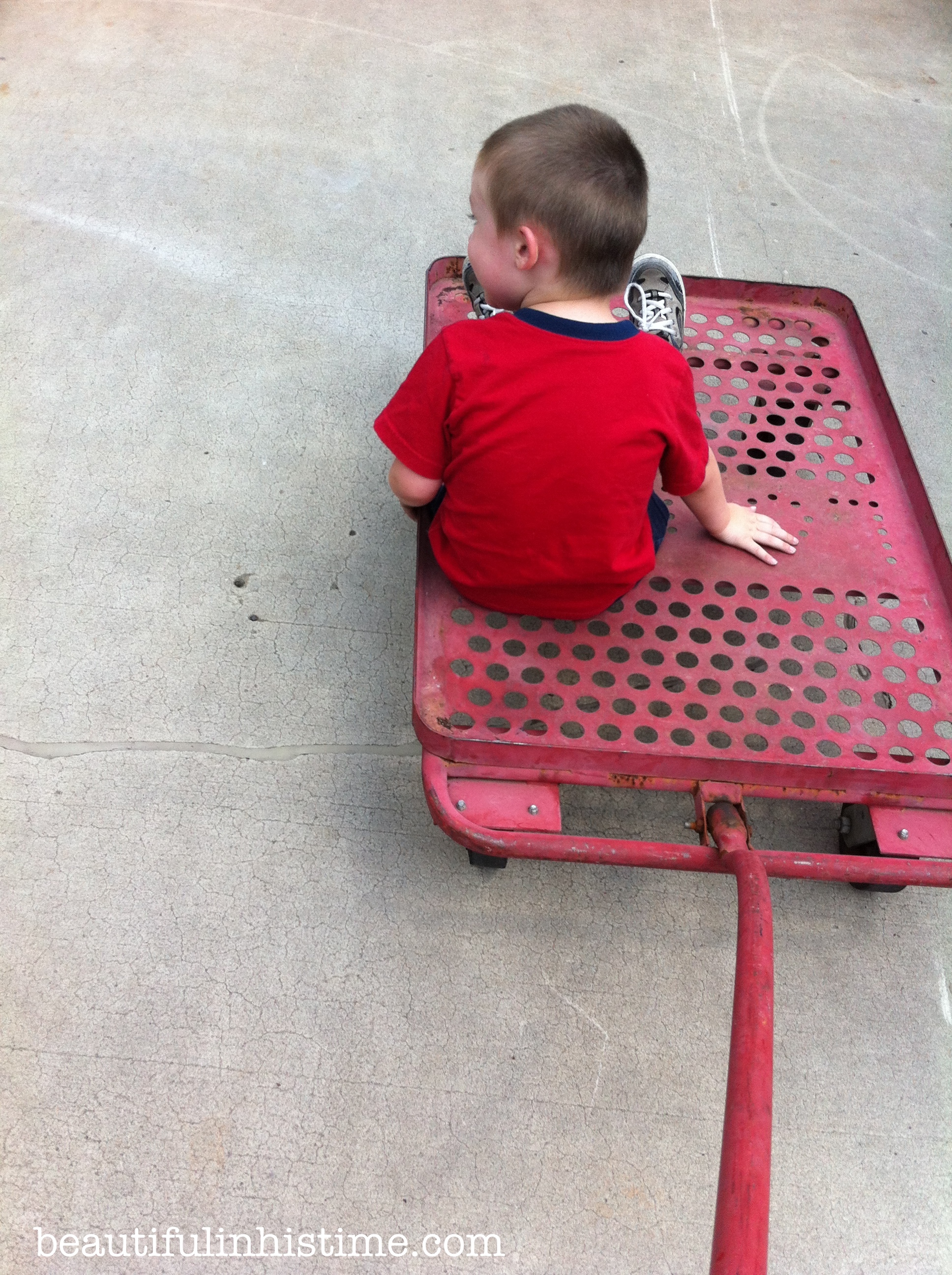 We also got to see a butterfly and hang out in a forest: 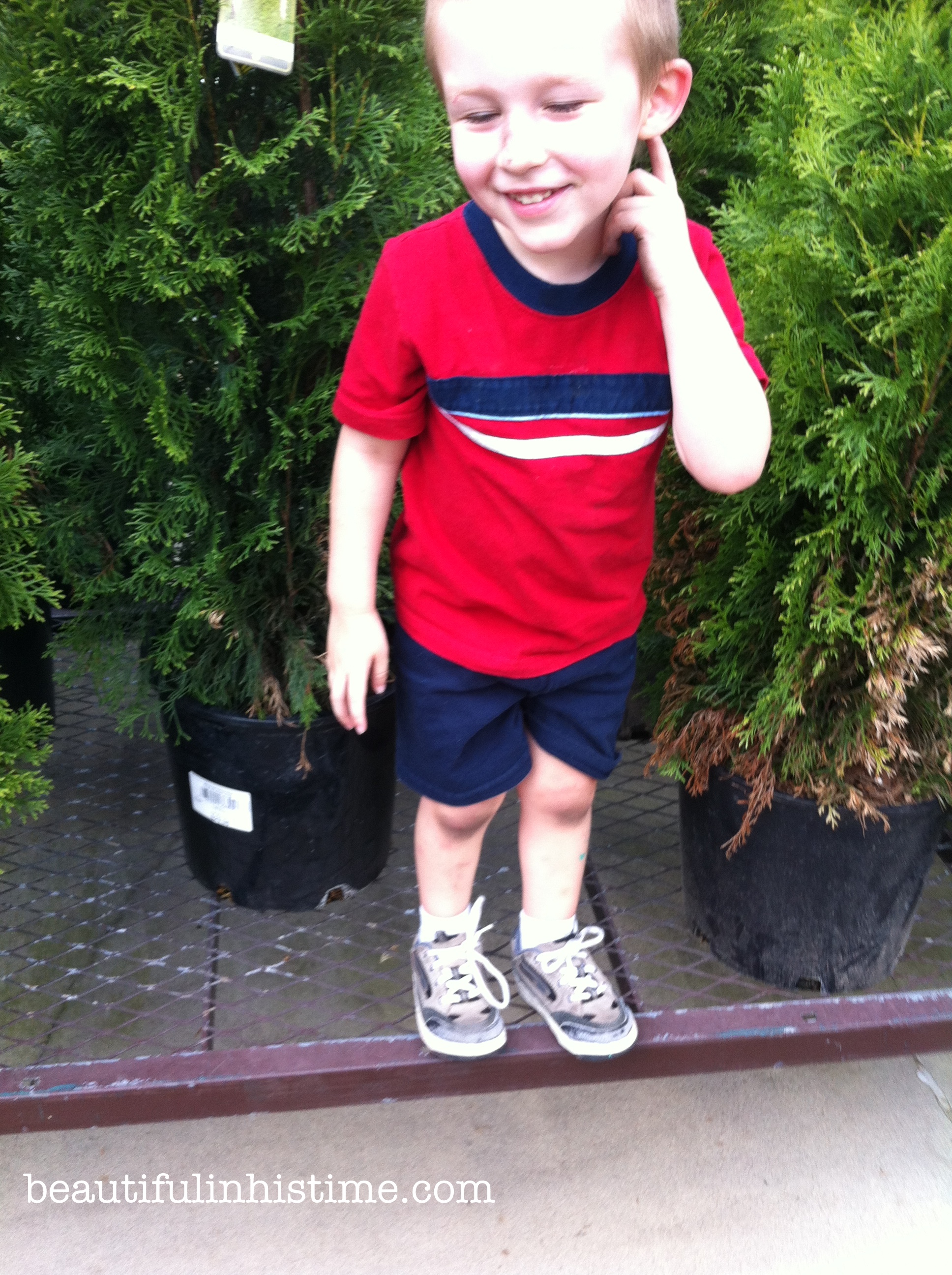 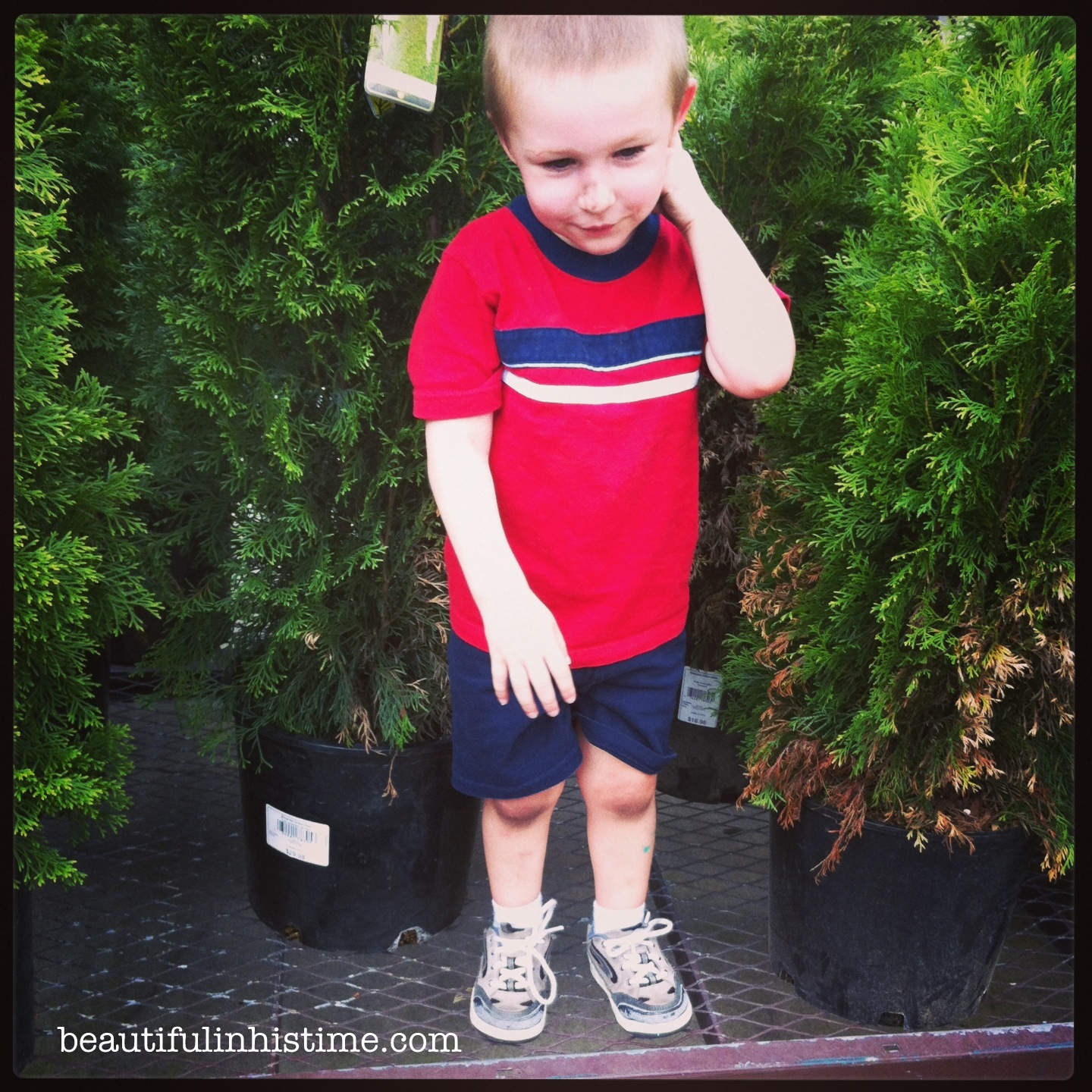 And do some jumping: 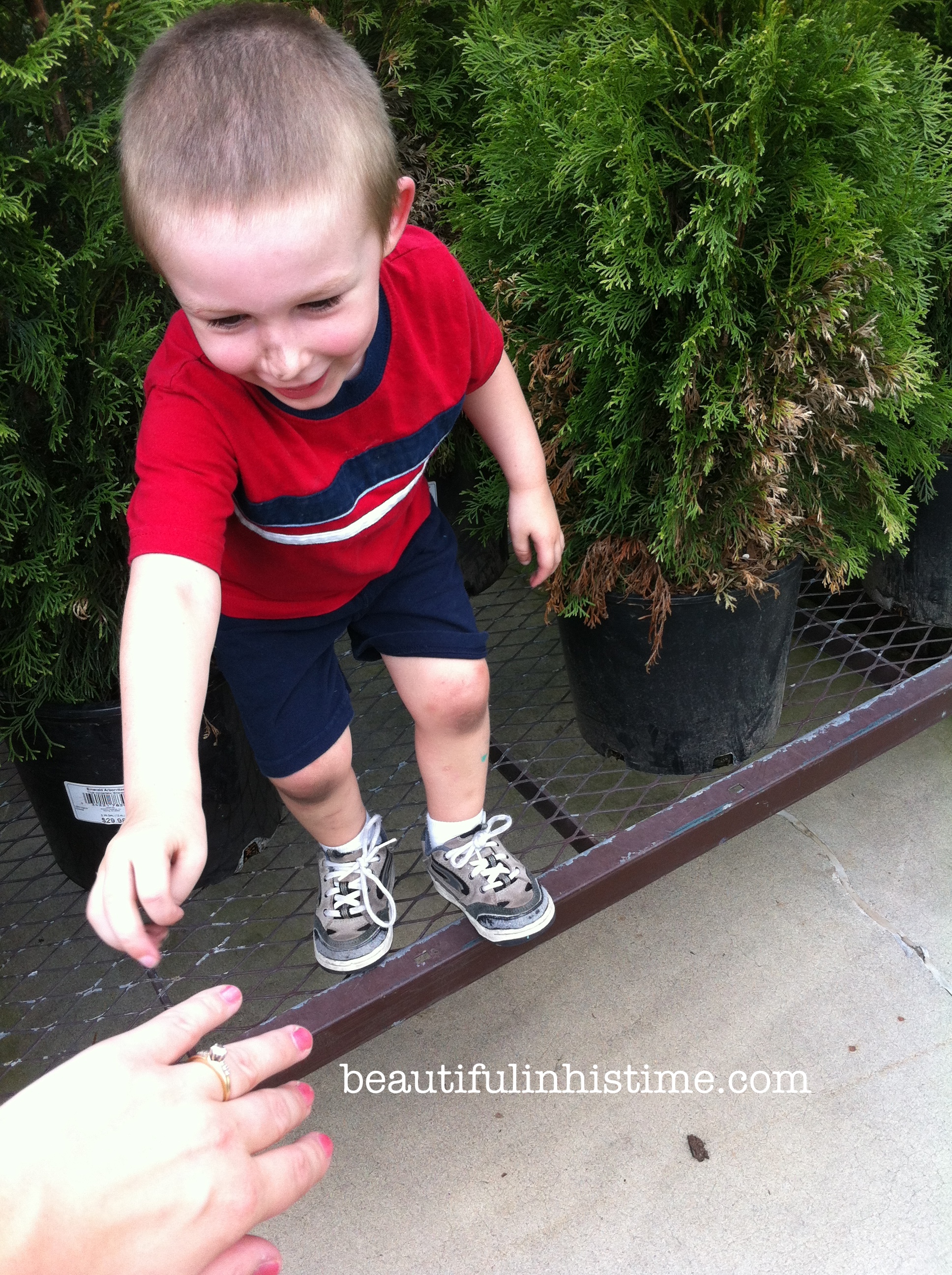 We ended our fun time at the “special store” with a visit to the splash pad…er…the fountain displays: 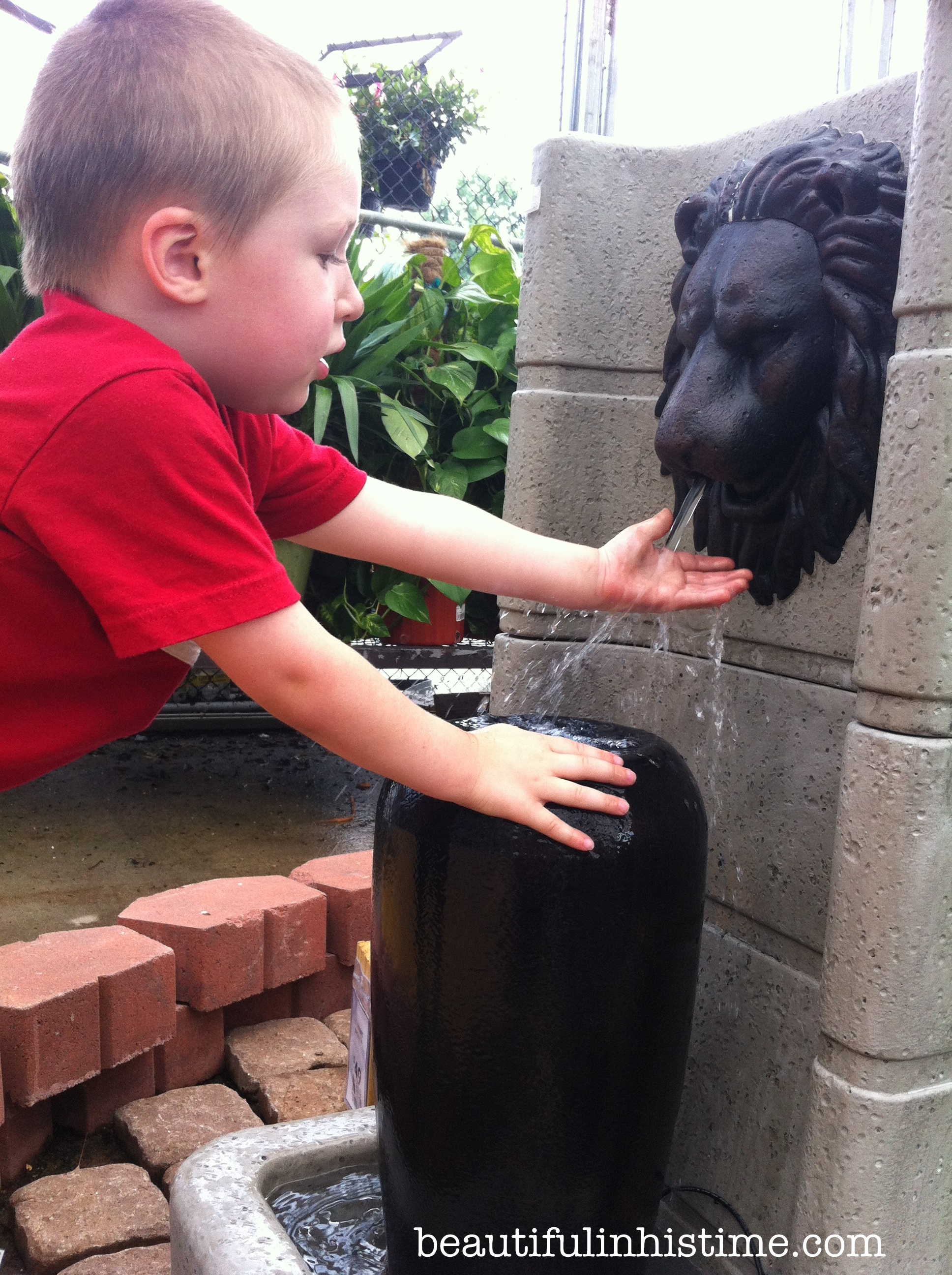 (Ezra got soaked! We got his hands washed but missed his nose.) 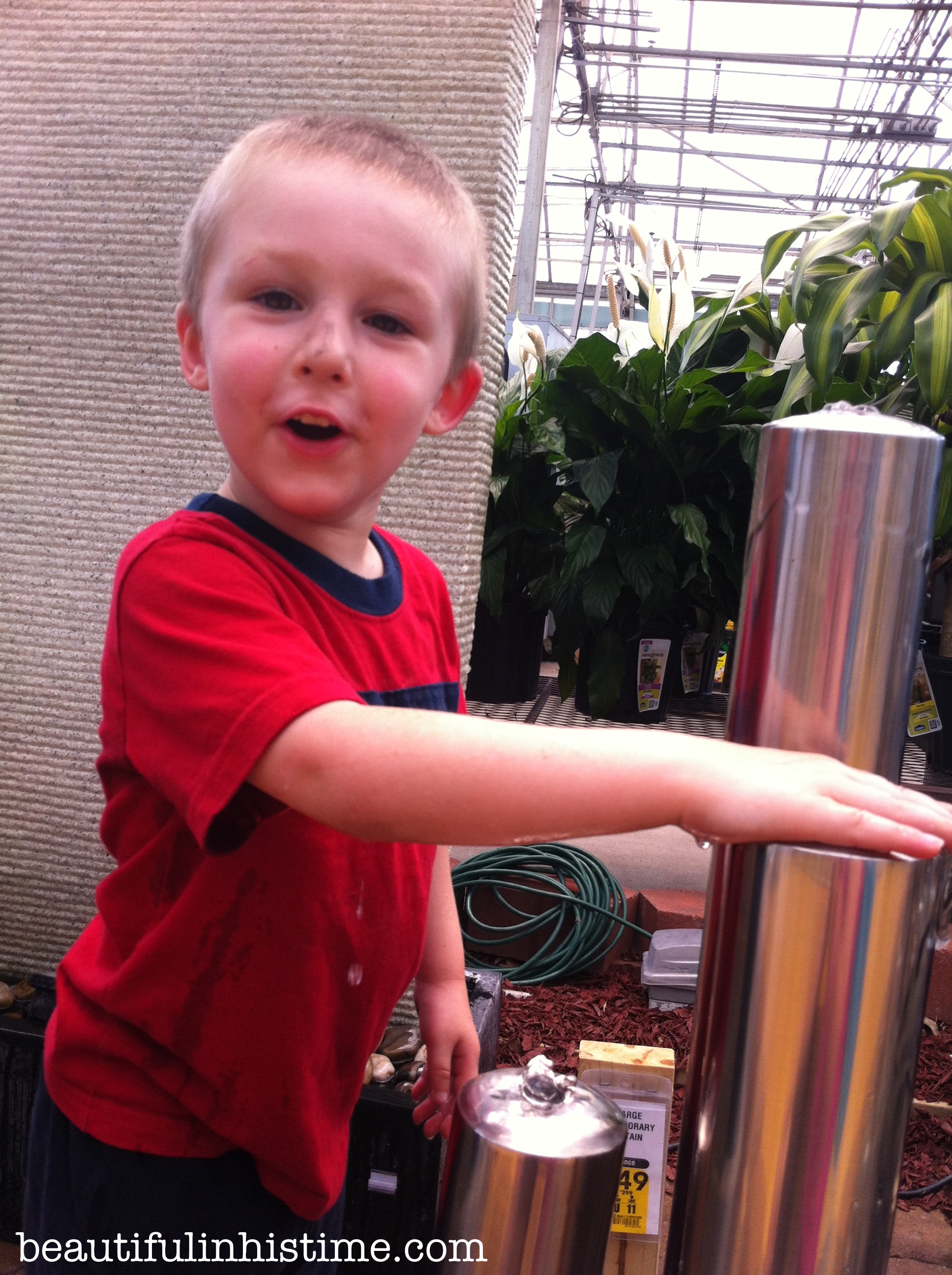 And we got to see Buddha. Ezra looks fascinated, but I promise – it’s the water. Not the Buddha. Promise. Really. 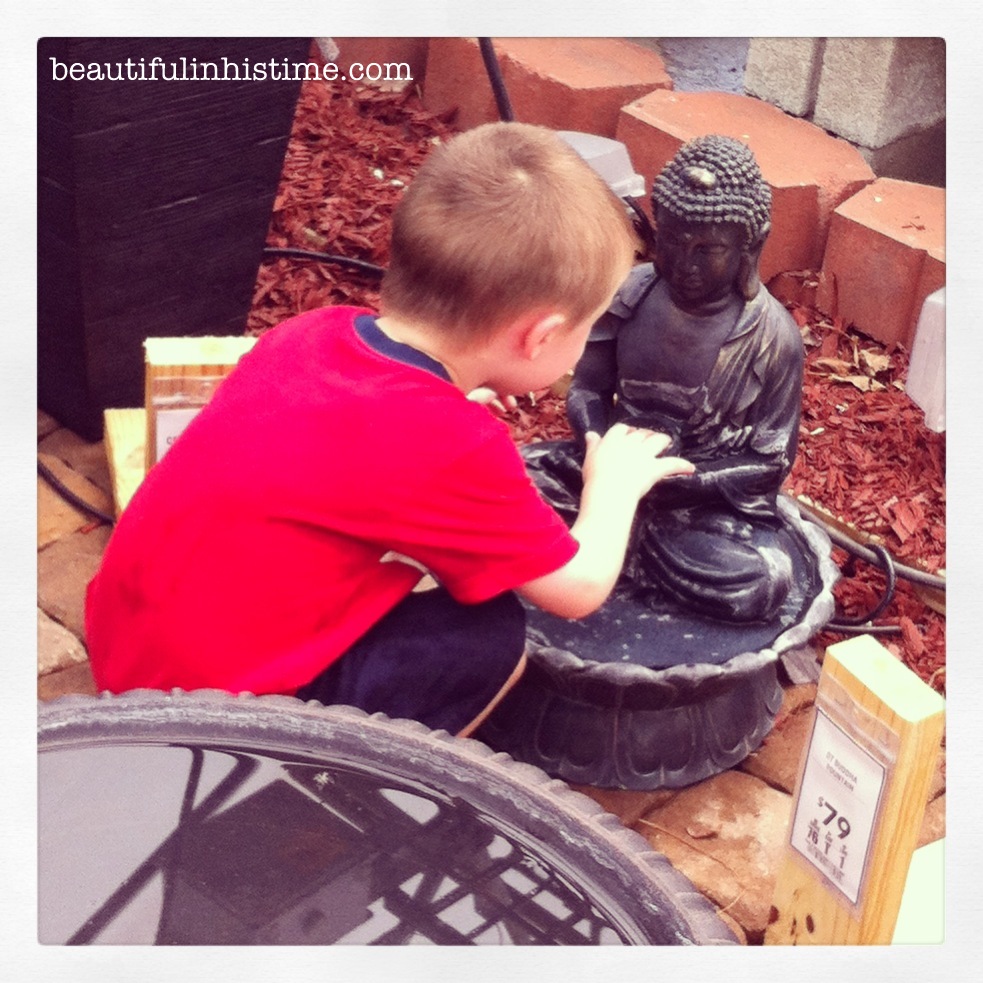 Ezra threw rocks into the bird feeder and then we had a talk in which I told him that we were leaving and – he peed on me. (I guess that’s what happens when you get all wet!) Then he ran away from me in the parking lot – twice. But I finally got him into the car and home for a nap.

When I said that this was “totally free” I meant money-free. Not stress-free, tantrum-free, or crazy-free.

Seriously though – while not a stellar outing as far as sanity goes, Ezra loves going to “the special store” on occasions. There’s lots to do and it’s air-conditioned, close, and free. Try it sometime with your kids. They might even like it better than they like the zoo!