This post is part 17 in a blog series that I have entitled “the wilderness between legalism and grace,” in which I share how I came to realize that I had an incorrect view of God and self and how I became free of the system of legalism whereby I was trying to earn God’s favor. You can view all of the posts in the series here on the series landing page.

With my last post about how legalism affected my mothering, I covered a lot of territory chronologically. In so doing – I skipped over a few things that I’d like to go back and share over the next few posts.

In August of 2009, after my husband’s first deployment, we moved from Fort Hood, Texas to Fort Knox, Kentucky. While I was already really struggling with how I viewed legalism and had even cheated on our “good Baptist” church in Texas, neither my husband and I were ready to turn away from “fundamentalism.” So when we arrived in Kentucky, we quickly found a good independent, fundamental, Baptist church to attend.

We attended that church for the next two years, but struggled to fit in the entire time we were attending there. There was a lot of good things about the church and the people there, and most of our “problems” with the church had very little to do with legalism, so I’m not going to go into them here. We just weren’t completely happy, and we knew it – but tried to make the best of it because we thought it was where we were supposed to be.

Once I had Ezra in the fall of 2010 and my husband deployed at the end of that year, my church attendance got a little lax. I attended most Sunday mornings, unless Ezra was sick (which he was a lot) or we were traveling (which we did an awful lot of that year), but normally skipped Sunday and Wednesday nights, because I was so tired from dealing with a baby who wouldn’t sleep while my husband was gone. Even when I went on Sunday mornings, I often spent so much time with Ezra in the nursery (or simply struggling to stay awake during the sermon), I wondered why I was going at all!

That year, I spent far more time hanging around my military “sisters” – people who got what I was going through with deployment and “single” motherhood. And once a month, I went to a military wife support group called Operation Faithful Support where we talked about specific deployment issues and how to keep our marriages strong while we were going through a difficult separation. 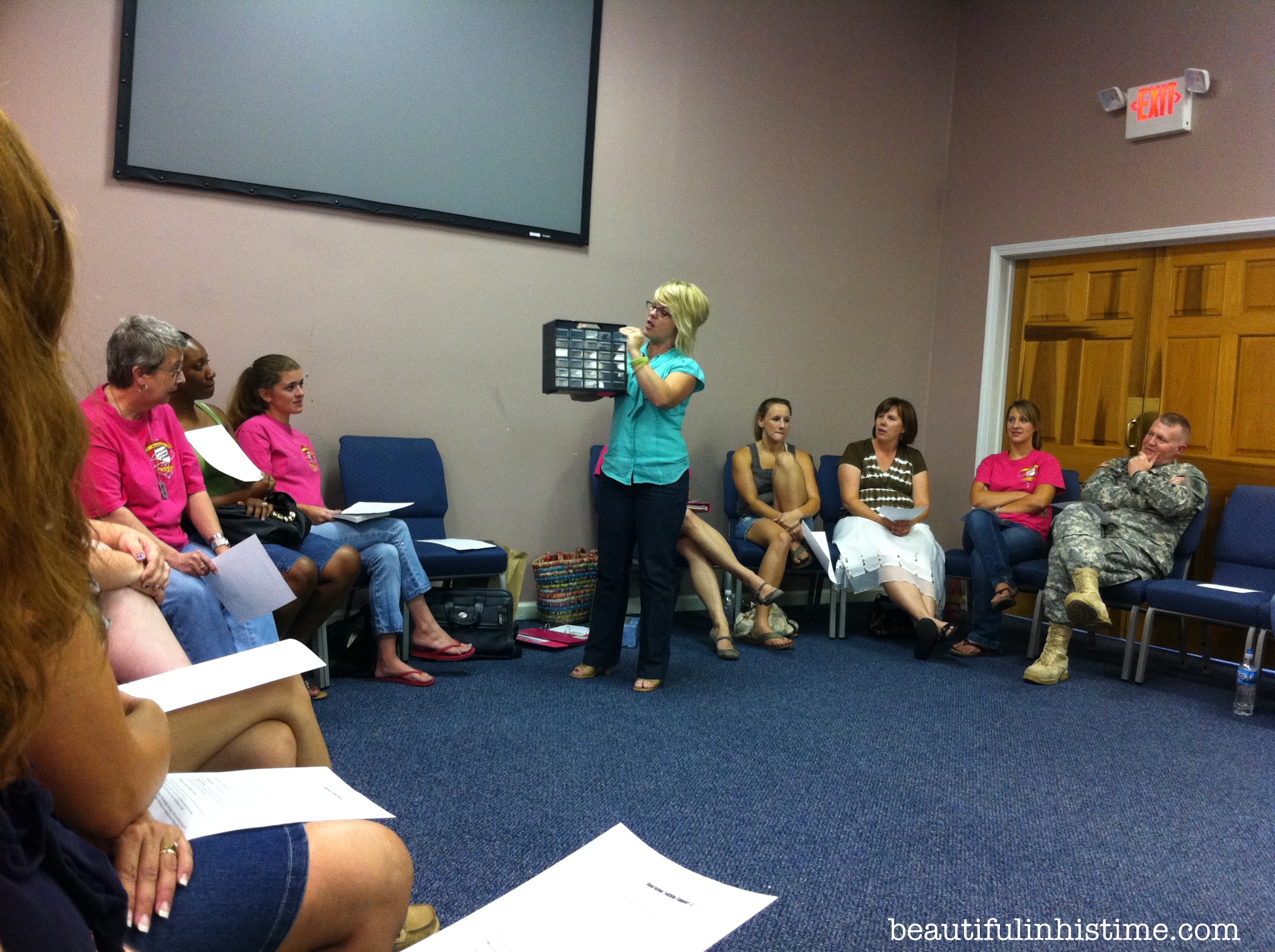 This is where I can’t talk about grace without talking about one of the people who has shown me grace the most.

Jill, the founder of OFS, may look teeny, but she is a strong Christian who God uses in mighty ways every single day. Jill created OFS to be a strictly non-religious program on purpose, so that people of all faiths (or no faith) could benefit from the resources she provided and find support. So, while God was never talked about, he bled through into the words that were spoken at almost every meeting. Jill couldn’t hide him.

A small portion of the OFS attendees were Christian (I being one of them), and Jill reached out to us by creating an off-shoot Bible study for the members of OFS. I gladly stepped up to attend, even though it meant cheating on my church (again) by attending an assemblies of God church on Wednesday nights. (The church simply offered Jill the place to meet.)

This Bible study was full of military-wife girl-talk, copious amounts of coffee, occasionally candles and chocolate, and an awful lot of grace. They looked to me to find all of the Bible verses that came to mind, and I looked to them for realism and relevancy in a world where God just didn’t seem all that relevant anymore. I don’t remember that much about what we studied, but there are two distinct moments from those few months I attended that are markers along my journey through the wilderness. I look back at them and can say, “There, right there – I didn’t know it at the time, but that changed my life.”

The first incident happened at the end of one evening of study – in those few minutes when I was wanting to stay and chat with Jill but knew I should be running to pick Ezra up from childcare promptly at 8. Jill was saying something encouraging, and I was resisting her encouragement. I can’t remember what the topic was, but it was some area of my life where I felt like I was failing.

“I’m just not where I should be.” I said with an exasperated sigh.

And Jill sort of looked at me and shook her head, almost baffled, and said with grace:

I was stunned speechless.

Christian growth isn’t nearly as linear as we think it is. <—Tweet This!

So often we rely on the traditions of men that are based on a contorted view of God to determine where we “should be” in our Christian life. We judge it based on how often we read the Bible or attend church, how much we pray, or how many good works we do.

I know that’s what I was doing. As much as I had been hurt and frustrated by legalism, so much of me couldn’t let go of it because I thought that living that sort of life was what I “should be” doing. If I could only get back to the way things were when I was in high school. I “should be” reading my Bible every day. I “shouldn’t be” wearing pants. I “shouldn’t be” listening to this or watching that.

I was trying to move forward in a walk with God by looking backwards.

I was defining my status before God based on my own interpretation of what it should look like.

The second life-changing thing that I took away from Jill was part of her personal testimony. She was talking about a time in her life when she had what I think I remember her calling “a stinky attitude” toward God. She said that there was some ugly in her life. And then she opened her hands and said, “I prayed, and I gave God my ugly.”

I don’t know what her ugly looked like, but I know that God has made something beautiful out of that ugly that she gave him.

Growing up, I heard a lot of preaching about surrender and what surrender looks like.

While I think so much of the preaching and teaching on surrender is very well-meaning, often it sounds a lot like cleaning up your life so you can be good enough for God. Putting your “all on the altar” meant that you had to give up all the bad things you were doing. Or if you were surrendering to something good, like “the will of God,” it most likely meant giving in to doing something that you really would rather not do.

Many times, that’s what surrender does in fact look like, I won’t discount that.

But sometimes, the first step of surrender is admitting to God that you aren’t ready to surrender.<—Tweet This!

It’s saying, “God, I like the bad stuff, and I don’t like the good stuff. I don’t want to read my Bible. I don’t want to go to church. I don’t want to give up this life that pleases me. I have a stinky attitude. I know you want every part of me, but there’s so much ugly in my heart I don’t know why you would even want me.

But you say that you do…so here it is. Here’s my ugly.”

God doesn’t ask us to clean up to approach him. He says that we can come boldly. All he needs is hands that are willing to offer up our ugly, in all of its sinful ugliness.

People who can “clean up” their lives on their own don’t need the righteousness of a savior.

It is the ugly who need grace. And it is only after, not before, he has offered that grace and forgiveness that he says “Go, and sin no more.” 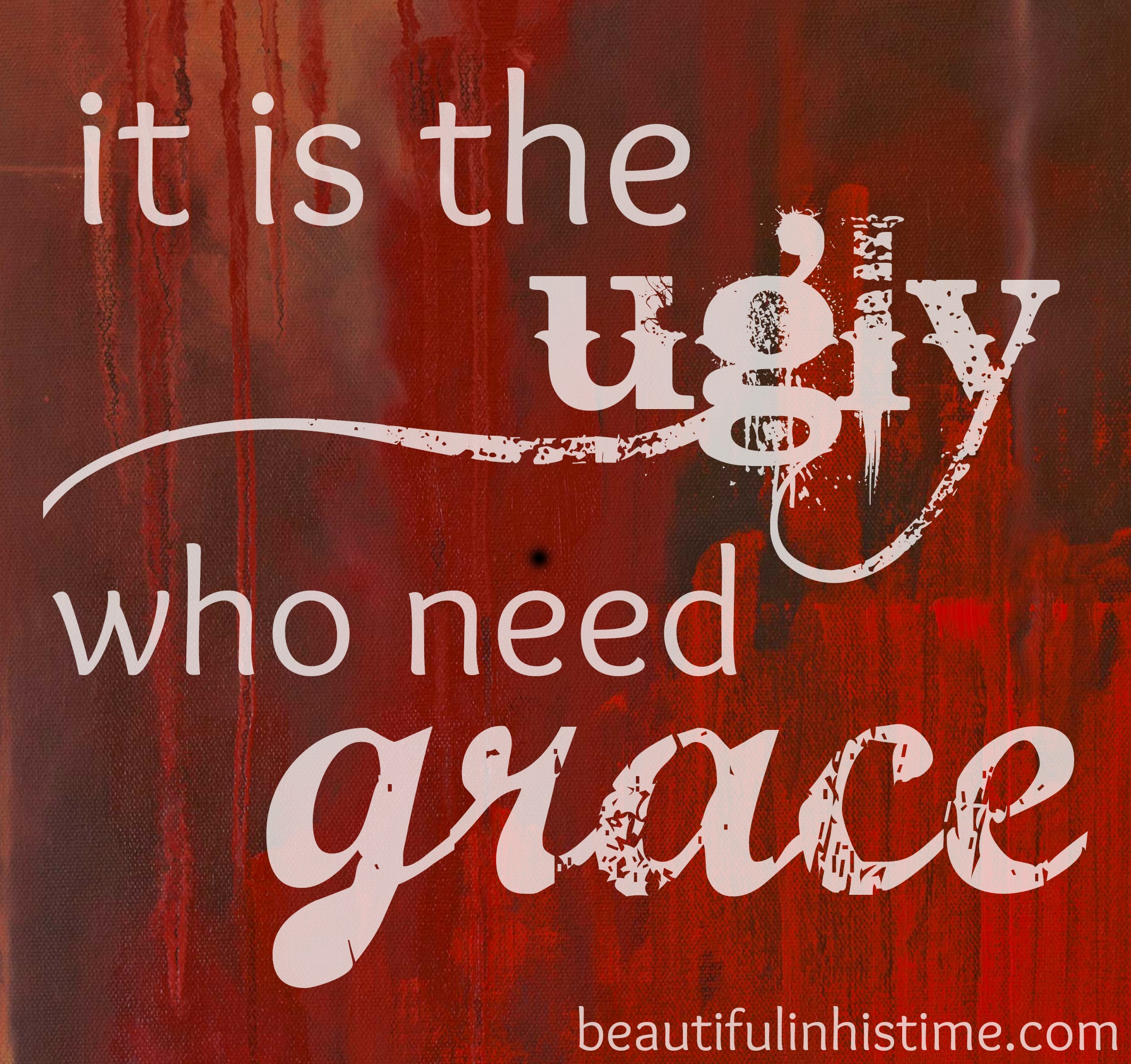 I’ve been in your shoes. Feeling deflated because you are not where you “should be,” because your life just doesn’t measure up to all the voices in your head saying what your life should and shouldn’t look like. I see your heart, ashamed of the ugliness inside. Frustrated because your attitude stinks and you know it, but the thought of cleaning up your life to fix it just seems impossible and not worth the effort anymore.

Can I remind you once again how very very much God loves you? How he looked down on you in all your ugliness and said, “Her, I want her! And I will let my only son die and take on her sin to have her…” Can I remind you that he made a way – for you? A way that isn’t about “cleaning up” your life or somehow being “good enough”? Can I remind you that the very way that made a place for you in heaven is the same way that’s going to give you a victorious Christian life on earth?

That way is dependence on the spotless perfection of Jesus – because ONLY he can clothe you in righteousness. Only his blood can cleanse you and make you “whiter than snow.”

Can I say that again?

God wants only your willingness to daily depend on the goodness of his son. <–Tweet This!

This, my friends, is grace.

Forget about where you “should be,” and give God your ugly today.

Next post, part 18: When your church isn’t meeting your needs