This is the question that I’ve been hearing a lot this week! And it’s a good question. But it’s one that in some ways I don’t know how to answer with a quick reply.

Words like great, awesome, and wonderful are indeed true…but so are words like hard, emotional, and difficult. But those are words that most people don’t expect to hear when they ask the question.

What I’d like to do is take this post to go into more detail and answer the question on everyone’s mind. I am going to be honest and transparent. I am going to share the good and the bad – the things that went well, and the mistakes that I made.

I have been to plenty of briefings and meetings on the subject of RnR and reintegration. Some official Army briefings–others more personal group sessions like Operation Faithful Support. They warn that RnR can be a difficult time and that we can’t expect perfection. I heard it, I understood it, but I didn’t really comprehend it. I heard women I knew say that they hated RnR and wished it weren’t an option for their soldier. Waaaat? How can they say that?! This is our second deployment. Our first RnR was amazing and easy and I could never imagine using the words “hard” or “difficult” to describe RnR – or wishing that it didn’t exist.

But it only took a day into my husband’s time home for me to realize the truth behind what they were saying. We had a wonderful reunion (minus the flu of course) and had a great first few hours together. Ezra loved his daddy so much! 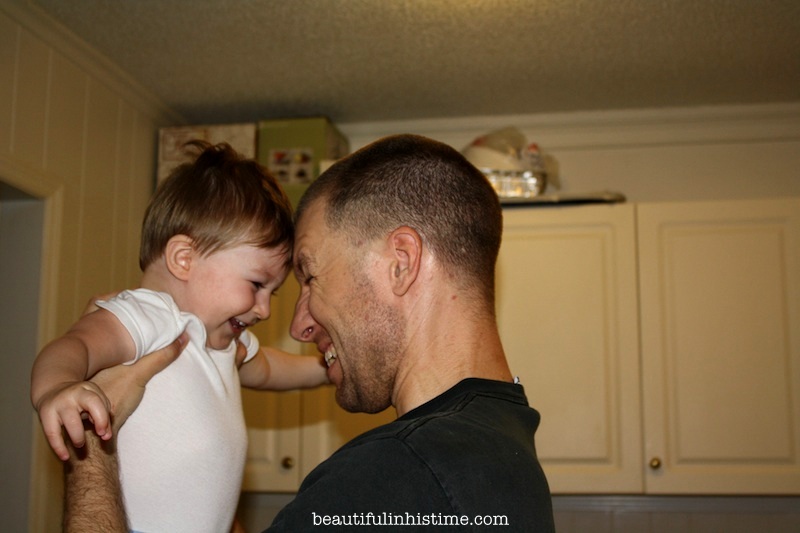 But Ezra has changed a lot in the last 8 months. I didn’t even realize quite how much until we tried to do something simple like watch one of our favorite TV shows. We used to be able to watch TV shows on the computer, and Ezra would lay quietly on the floor or sit next to us on the couch like this:

(Insert toddler noise and sound effects here. Babeh, can you please turn it up?)

The first few days, Russ was in what he calls “go mode.” Full speed ahead…take charge, 100% forward. It didn’t matter what it was, it was a task that needed to be accomplished, and he was going to accomplish it. Relax was a word he couldn’t even imagine. (This is actually fairly common behavior for soldiers coming home from deployment…even more so for Russ. He only has two speeds. Stop and go. And Russ, when he is relaxed, is still a lot more intense than most people.) His anxiety levels were high, and he was defensive. As Ezra and I struggled to adjust to this new highly dynamic force in our lives, Russ often felt like he was doing “everything wrong.” And he wasn’t…we just weren’t used to it all.

For the most part Ezra loved to play with daddy. He loved all the big boy games! Like the “superman game”:

But other games were frightening to Ezra, like the “wash and dry the baby” game:

When Ezra didn’t respond well to such “daddy games,” Russ would feel rejected and dejected. He wanted so hard to be accepted into Ezra’s life, but sometimes would just give up with frustration and tell Ezra, “Fine just go see mommy…she’ll save you!” This in turn made me feel stressed and upset. I tried to tell Russ that it was okay, it would just take time. I tried to explain things to Russ about Ezra’s personality without sounding like I was scolding or telling him what to do. That was a hard balance to find!

There were little fights between us, usually over little non-important stuff. But other fights were over some bigger problems we were facing in our relationship. One of the biggest problems is that we weren’t relaxed with each other. Russ was stressed and anxious, and I responded by being stressed and anxious, which made Ezra fussy, which made Russ even more stressed. And we’d usually end up fighting. It was a horrible cycle. And the thing I kept thinking was “WHY IS THIS SO HARD!?!?!” It took lots of tears before I realized that my attitude was a huge factor. I was expecting perfection. I was expecting things to be a certain way, and when they weren’t – I became so fixated on the problems, and trying to fix them, that I was missing just enjoying the fact that Russ was home and everything was going to be okay.

I am thankful that I had some close friends to reach out to by private messages during this time. Just to know I wasn’t alone – and one of my friends said something so helpful that changed my attitude completely:

One of you has to be stable one, and right now that is got to be you. If you know he is going to be anxious, don’t be anxious yourself! Try to remain calm for him, focus his attention on other things so as to distract him, and pray for peace. As someone who has an anxiety disorder, I can honestly say that if I am on the verge of panicking or if I am in a situation where I am anxious, I NEED my husband to remain calm and get me through it. I need him to be that rock. If you both are on edge it’s going to create a lot of tension. Tension leads to fighting, and I think we both know where fighting leads…

It was simple common-sense advice…but it was advice I needed to hear. I had to let go of my expectations of perfection, relax, and just focus on the good things instead of the problems. Not to ignore the problems, but to realize that 14 days of leave isn’t enough time to fix everything. Some problems I just had to set on the shelf and realize that trying to fix them now was just going to cause more struggles and fights than I wanted to deal with.

I took my hands off of the Ezra-daddy relationship and tried to just let Russ take over and do things as he saw fit – even if they were different from the way I did things.

I started to focus less on my husband’s anxiety problems and spiritual struggles and more on the huge amount of love and attention he was trying to lavish upon me.

Flowers twice in 14 days – can’t really complain about that!!

One of the things that was crucial for us was getting baby-free date time. I cannot recommend this enough for ANY couple with children – especially those who are trying to adjust after a separation. Even if it’s just an hour, even if you have a nursing baby…it’s totally worth it! Don’t make excuses…make time for each other. Every time we had a date we came home feeling so NORMAL and so much more in love.

Live play of Sense and Sensibility – yes my husband is DEFINITELY a keeper!

On our way to a Darius Rucker concert – it was definitely one of the best nights of our entire married life!!!

A simple breakfast date after which we went home and napped on the couch – then took a walk around our neighborhood:

Another thing that was extremely helpful to us was getting a little bit of counseling while he was home. For some couples, meeting with an outside party over RnR might not be the right option – but for us, it was. We met with a close friend of Russell’s who also doubled as a spiritual mentor and mediator to us. It was wonderful just having more freedom to talk about each other and to each other in an environment that felt safe to us. Having someone to talk to who cared about us, even when he didn’t totally understand what we were going through…helped us so much. I am so thankful for this individual and the help and support he offered to us. It really made a difference in the success of our RnR time and helped us break through communication barriers we were struggling to get over. We also watched some of the DVD’s in the “Laugh Your Way to a Better Marriage” program. We didn’t make it through all of them, but the few that we watched were extremely helpful.

“Getting counseling” and “watching marriage DVDs” are things that seem to have the stigma of “you have a bad marriage” attached to them. That’s just not true. Russ and I have a wonderful marriage that I think surpasses many marriages that I see around me. But even the best marriages can be better. Deployment is a hard thing for a marriage to go through and still survive, let alone thrive. When he came home, our marriage was in the “surviving” category; when he left I felt like we had graduated back to the “thriving” category.

As the two weeks progressed and we did these “little” things, our time together went from being difficult and stressful to being wonderful, amazing, and just plain old normal… and trust me, if you are feeling normal, you can count your time together as a HUGE success!

I know this post hasn’t been the fairy-tale reunion that you might have been expecting to read about. And in some ways, that makes me feel embarrassed. But I think I have those feelings because people who go through difficult times like this simply don’t share it. Those first few days I felt so alone, like there was something “wrong” with our family because adjusting to each other was so hard. Then I stumbled upon this blog post: It’s Not Always a FairyTale (no longer published). This girl’s post encouraged me that everything we were experiencing was very normal, and encouraged me that I needed to write this post and share the good AND the bad.

Looking back on the two weeks I see struggle and pain, but I see so much progress! We accomplished and did so much together and really and truly reconnected as a family. I am not one of those women who can say, “I hate RnR – I wish it weren’t an option.” I am so incredibly thankful that we had this opportunity to spend time together. I think that we made some huge strides and we are in a much better place than we were before he came home, which is going to help us so much when it comes time for reintegration when Russ comes home for good.

We struggled…and it was hard.

But it was amazing…

And full of more love than you could ever imagine!!!