Monday, September 5th, 2011…what most people knew as Labor Day.

What I knew is that it was the day my husband was coming home for mid-tour leave!!!

I woke up at 3am totally unable to sleep because of the butterflies. I was awake for a while and then fell back to sleep. I woke up around 6am and the butterflies were worse. I had a BAD stomach ache. I knew I wouldn’t be getting any more sleep, so I got up to change the sheets on the bed. I had just gotten the sheets stripped when I had to run for the bathroom. Ewww…these nerves were really getting to me. I continued (unsuccessfully) to try to change the sheets, and then ran to the bathroom to throw up in the sink! At this point, I knew it was more than just nerves and butterflies. I had come down with a bad stomach flu!

It was going around. Some of the people I had spent time with over the weekend were posting on Facebook about their symptoms, the same as mine. I laid on the couch pretty much just trying to keep the pain away. Every time I got up to do anything, I’d end up in the bathroom. I tried eating toast and drinking ginger tea, but I couldn’t keep it down.

I laid there wondering what in the world to do. I still had some last minute cleaning to do. I had scheduled to send Ezra to the baby-sitters to get my nails done. That obviously wasn’t going to happen! Instead I called Ezra’s babysitter and asked her to bring me some gingerale and crackers! At that point (around 8AM) I figured that my only goal was to make it to the airport that afternoon. The house, the dress, the nails, the hair – none of that mattered. I just wanted to be in his arms again!

At 9AM I called a friend and prayer warrior and asked her to pray with me and for me. We prayed that the devil wouldn’t keep me from making it to the airport! From 9-12 things went like this: eat a cracker, drink ginger ale, run to the bathroom, feel better for all of about 10 minutes in which I would speed clean, lay down, repeat. Somehow the house slowly got in order, and I started to feel a little bit stronger.

I lost about three pounds that morning, which is kind of nice, considering my homecoming dress went from being “a tad snug” to “just about perfect.”

Around noon I got the call that Russ had made it to Atlanta. He told me that he was trying to get on an earlier flight that was scheduled to land around 2:45. He told me that if I didn’t hear back from him, that he made it on the flight. If he didn’t make it, he would call. Commence panic attack. There was no way I was going to be able to get ready, drive up to the airport, go through security, and make it to the gate on time…but I was going to try. I was a bit relieved when he called again to tell me he didn’t make it on the earlier flight and was scheduled to get in around 4. Now I actually had a chance to get pretty!

Facebook Status, 2:11 PM: Despite allergies, the flu, and a lack of sleep…This girl didn’t let the devil win today! leaving for the airport to go pick up MY LOVE – complete with contacts in, makeup on, hair done, nails AND toes painted, and my baby boy ready to nap on the way!!!! ♥ ♥ ♥ ♥ ♥ ♥ ♥ ♥

I was pretty amazed that I made it the 50 minute drive to the airport without getting sick – at all. I was pale and had only eaten about a dozen saltine crackers all day, but I was so excited just to have made it there. I got through security without any issues and passed some time shooting a few pictures. 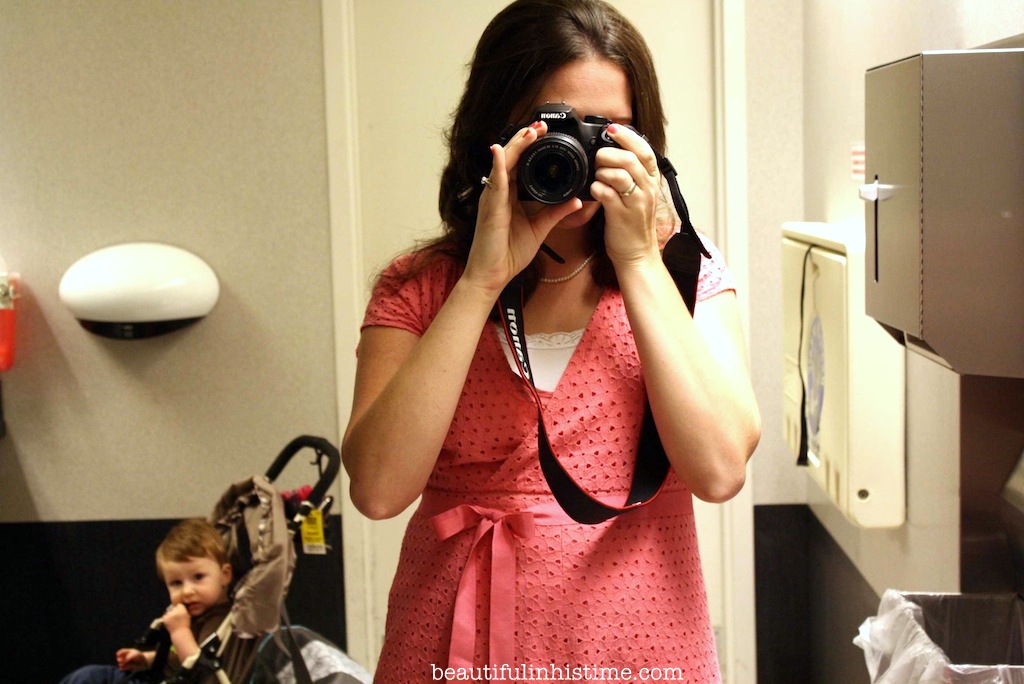 Ezra was quite excited to be in a new place. He liked watching airplanes and crawling around the terminal.

I passed my camera off to a WONDERFUL stranger who was willing to take photos. Then there was the waiting…

But we didn’t have to wait for very long before some other spouses from our unit showed up, excited to pick up their husbands too!

We were all checking our phones and iPads pretty much obsessively until we could see the flight status change to LANDED! About 2 seconds later my phone rang and Russ told me, “I’m HERE!”

It didn’t take but a few minutes before the plane pulled up!

One last nervous fixing of the hair…

Russ managed to be one of the first few people off of the plane. I did a little happy-hop when I saw him for the first time. His first words were, “Who’s this big boy?!?!” He gave us both a sweet quick embrace and immediately took Ezra. They connected instantly!

This picture pretty much says it all!

I have a lot of blogging to catch up on! Our RnR has been an amazingly wonderful time, but not without its challenges. I hope to share a lot of it with you readers over the next few weeks – it’s just going to take some time.

Now that you’ve seen the photos, here’s the video. It’s slightly out of focus, but you’ll get the picture!!

This is how we survived the summer