I don’t have a “bucket list,” but if I did have one, “attend a ball with Prince Charming” would definitely be on it.

So, when the third opportunity in five years to attend a battalion ball came across the social calendar, I could not let it go. We had passed up the last two for various reasons (the second one was held just after Ezra was born), and I didn’t want to pass this one up as well, knowing it was likely the last opportunity we would have to go to a ball before Russ gets out of the military.

By at best a miracle of God or at least some odd happening of military fate, my husband has been stationed with the same unit and the same battalion in that unit for the last 4 1/2 years. That’s pretty much an eternity in military time. We have all of the items from all the Blue Spader fundraisers (the tshirts, the afghan, the Christmas ornament…even a baby onesie!) This is OUR battalion…full of headaches and misery from two deployments and sorrow for the loss of our fallen soldiers…but it’s a battalion we are both incredibly proud of. I have made a lot friendships during this past deployment with some amazing “military sisters” from the battalion. This made it all the more important to me that we go.

Russ didn’t want to go, for some of the reasons we had not attended the last two. “I have to get my dress uniform crap together” and “It’s just going to be a bunch of drinking and indecency!” I know I know I know but I REALLY wanna go! Just to see what it’s like!

I finally won him over with my pleas through a series of frustrating and stressful conversations. I found a dress at a consignment store that, with some slight alterations, fit my post-baby body rather well. The “uniform crap” got taken care of, after a bunch of stress and Russ getting very close to a panic attack. He still wasn’t very excited about going, but, nonetheless, we went forward with our plans, bought tickets, and found a babysitter.

Things got even more exciting as the ball fell on March 2, one of the worst days in tornado history for our area. The worst of the storms was supposed to hit around 4PM, and the ball festivities were scheduled to start around 5PM. To be safe, we dropped Ezra off at the sitter around 3, then came back to the house to get ready. We spent the next hour getting all prettied up while listening to tornado warning after tornado warning over the radio, watching Facebook friends freaking out about funnel cloud sitings, and taking pictures outside in the wind between breaks in the emergency sirens. 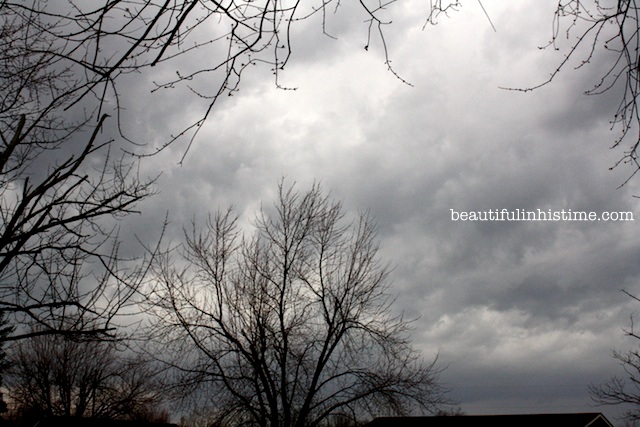 Did you know…soldiers aren’t supposed to wear hats or berets to the ball? Um, we didn’t!

I had wild visions of having to pull over and get in a ditch with my gown billowing in the wind to wait out the tornadoes, but the storms broke for the 30 minute drive to the hotel.

Here is the beautiful view as we were leaving our neighborhood:

I felt lovely wearing my periwinkle nail polish (which I was also wearing the day Ezra was born) and my Attagirl military bracelet.

All of Russell’s negative predictions about our ball experience were true. It was not a very comfortable environment for us as Christians due to all of the drinking and indecent attire. I could tell he was on edge the whole evening, but things were still pleasant for both of us, despite our discomfort. The food was okay, but the decorations were lovely and they had an AMAZING dessert and candy table!

Gummy Army men are the coolest!

For me, one of the best and most meaningful parts of the evening was being able to share in the honoring of our fallen soldiers and their families, including giving a standing ovation and special honor to one of our military widows that I have come to know over the past few months. This woman has amazing strength and has shown so much support to her fellow military wives and their soldiers over the course of this deployment. She attended every single welcome home ceremony until the last Blue Spader was home safely. It meant so much that she had the strength to attend such a gathering after everything she has been through. Doesn’t she look stunning?

All in all, I am glad to be able to say that I have been to a military ball. It was one of those military wife “rites of passage” that I wanted to be able to experience during our time in the military. Was it the best date we have ever had? Definitely not. Was it worth all of the disagreements, stress, and the money spent on our attire and tickets? Eh, probably not. We probably won’t attend another one even if the opportunity presents itself. But, having 7 hours of baby-free and being able to spend an nice evening together on a once in a lifetime occasion still made it worth it to me. At least now I can check “attend a ball with Prince Charming” off of my bucket list!

The importance of community in a Christian marriage

You won’t always be amazed by your marriage: a letter to my former self