In case you couldn’t tell, I’m masking a teeny bit of fear with humor and sarcasm.

I had a scare last night. Something weird happened…something off. I felt for a split second like I lost contact with reality, then suddenly woke up. Like you know those lines in scary books that say “and then all the blood drained from her face and down into her toes…”? It felt like that. For the next hour or so I kept trying to take deep breaths and calm myself down. I didn’t know what was happening, but I kept recording “events” on my monitor telling them “hey, not feelin’ too great over here!!!”

I hadn’t even really sat down to read through the booklet that they sent me…I stopped at the “your monitor is now activated” part. I laid in bed trying to sleep and wondered what would happen if something was seriously wrong. Would they send an ambulance to my house? Would people beat on my door, sending my husband into a panic attack, saying “HEY YOUR WIFE’S HEART IS MESSED UP AND WE HAVE TO TAKE HER IN NOW!” Would they call me? I imagined all sort of worst-case-scenario-evers and then finally drifted off to sleep somewhere around midnight.

I didn’t even hear my husband wake or leave the house at 0530 or whatever time he leaves now-a-days. I woke up at 0730 and felt fine…the horror-movie-slash-hospital-drama that played in my mind the night before long since forgotten.

I got breakfast made, lunches packed, my husband sent off to work, called the CDC to make sure my son could still attend daycare for the afternoon since he has the sniffles and a cough, scheduled a chiropractic appointment for Wednesday, and sat down with a cup of coffee to work on banking and budgeting for the month.

Sometime around 10am, I got a text from Russ telling me to check my voicemail (my phone had been on silent). A nurse from cardiology had called him. I checked it to hear the nurse say something like this: “Cardionet called us this morning. There are some irregularities… you need to go to the nearest emergency room as soon as possible.”

I tried not to panic. I calmly texted my husband the news and tried to scramble my thoughts into a plan of action. I’m home alone with a two-year-old boy. We are both still in our pajamas. I haven’t eaten anything, and I’m in desperate need of a shower. Do I call my in-town friend to watch Ezra so we can go to the “nearest hospital”? Is she even back from her trip? Or do I call the CDC back and try to get him in early so I can go to the Army hospital on post (just a tiny bit further away)? Can I take a shower? I probably shouldn’t go off of the monitor even for a shower I’m guessing… But shew I stink. Um, now what?

About an hour later I had rinsed off (while keeping monitor attached), changed clothes, gotten Ezra ready for daycare, fielded and/or made about 10 different phonecalls and 20 texts (from the nurse, my mother-in-law, my husband, my baby-sitter friend, the “nearest” hospital, and the Army hospital), packed a bag for the hospital (with an extra shirt, my Kindle, my Bible, and an apple…hey I’m prepared!) and eaten a tiny bit of food. My husband came home, and then we were headed back up to post to drop Ezra off at daycare so I could go to the ER.

I won’t bore you with a lot more details than that. The short story is that last night what I experienced was very real…my heart got out of rhythm for a few seconds…something called VTAC or SVT. It beat too fast. The doctors did an EKG, chest xray, and a ton of lab work, but everything came back completely normal.  In other words, there’s a rather serious problem, but they don’t know what’s causing it. But, the good news is that it isn’t THAT serious unless I go into VTAC frequently, or if I stay there for extended periods of time. It appears that I only had one small episode in five days…so they sent me home with a “calcium channel blocker” and orders to follow up with cardiology.

My ECHO has been moved up to this coming Wednesday…and as of right now, I’m still cleared to go to Nashville for the PWOC International conference this weekend (which I’ve only been looking forward to, for, ya know…a year!) I’m still on the heart monitor and the medication.

Speaking of the conference…this was SUPPOSED to be the original point of this post, but we got a little off-topic…

While I am in no way embarrassed or ashamed to wear a heart monitor and will gladly field any questions about it, I’m not really wanting to advertise it while hanging out with a bunch of wonderfully-amazing women who I haven’t met yet. So I’m trying my hand (or should I say neck?) at wearing scarves!

Up til a few days ago, I owned one lonely scarf. That I got as a Christmas gift in a set with a sweater. That hasn’t fit since I was pregnant with Ezra. So I only wore it a half dozen times, and had no clue HOW to wear it, other than something like this: 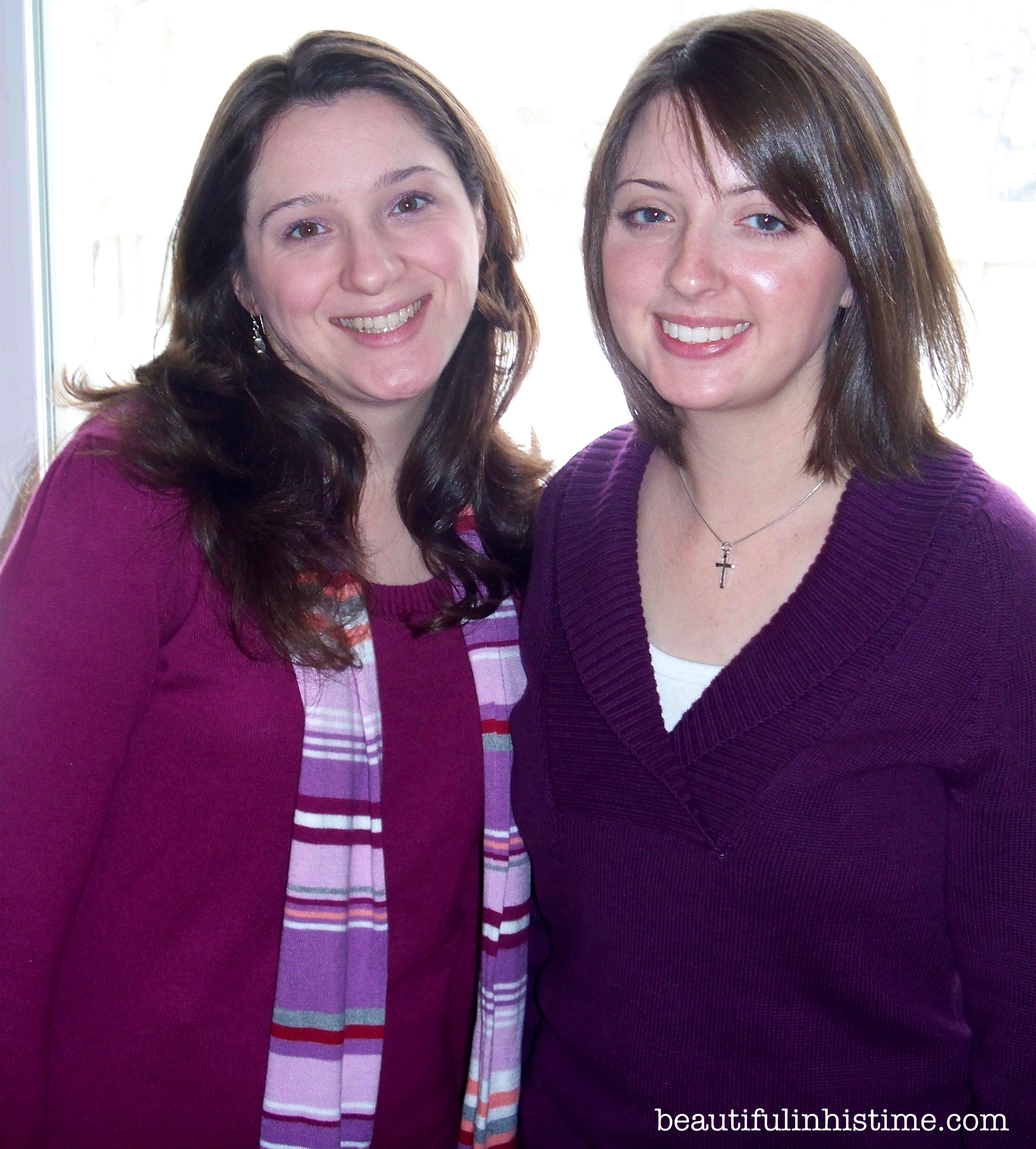 (P.S. That’s my lovely sister-in-law right there. P.S.S. There was a microscopic Ezra in my tummy.)

Scarves are one of those things that I think look really cute and trendy on other people…like friends, blogosphere people (ahem “what I wore” posts), and movie stars on teenage drama shows. But when I wear them, I feel like I would be served just as well by hanging a sign around my neck that says “Hello. I am a fool who doesn’t know how to wear scarves the right way. I’m just pretending to be trendy. And failing.”

But, thanks to Google and Pinterest searches I found this link on scarf knots that suddenly made things better. There’s more then one way to wear a scarf. In fact…there’s lots of ways that I had totally no clue about.

So I spent $12 on two scarves and $10 on three tops that I can mix and match together.

Scarf #1 is awesome because it is thin (like me…kinda) and feminine and sparkly and three shades of pinks which is great because about 40% of the tops in my closet are pink, red, or some shade in between. What can I say? I am a girly girl.

This scarf knot is called the “Girly Windsor.” Hubby isn’t a fan. He says it looks too much like a girly neck tie. He’s kinda right. But I don’t know…I kind of like it… 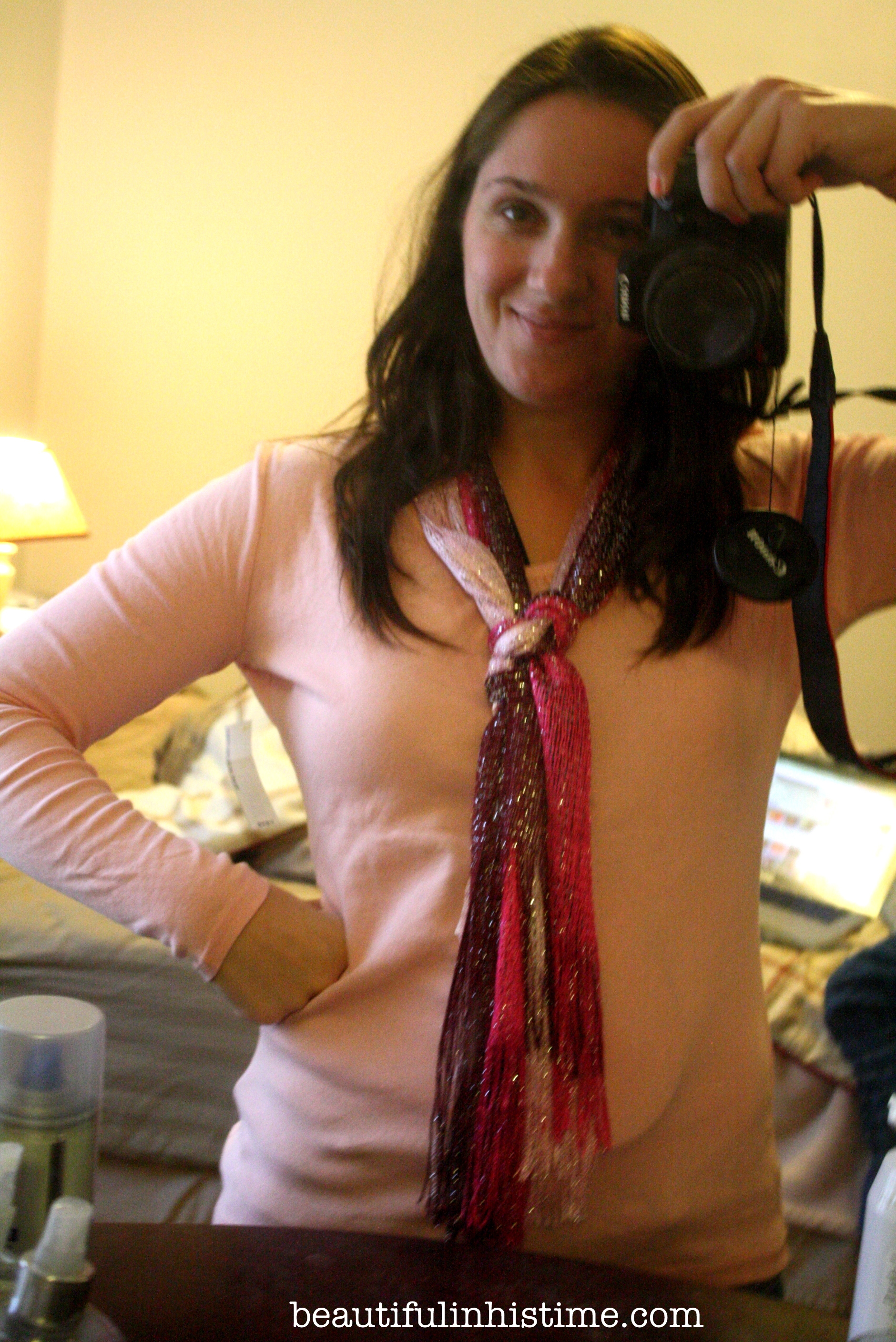 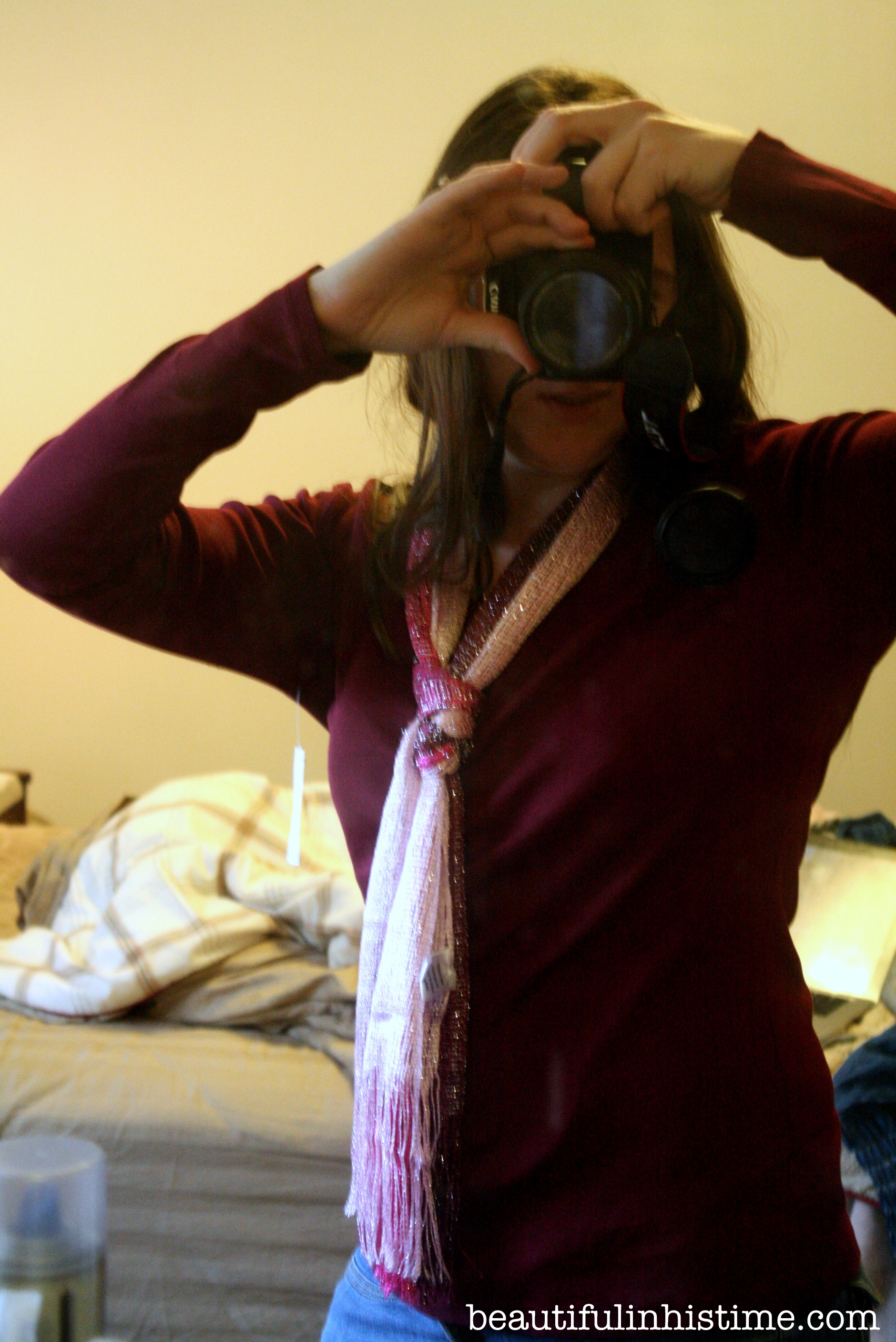 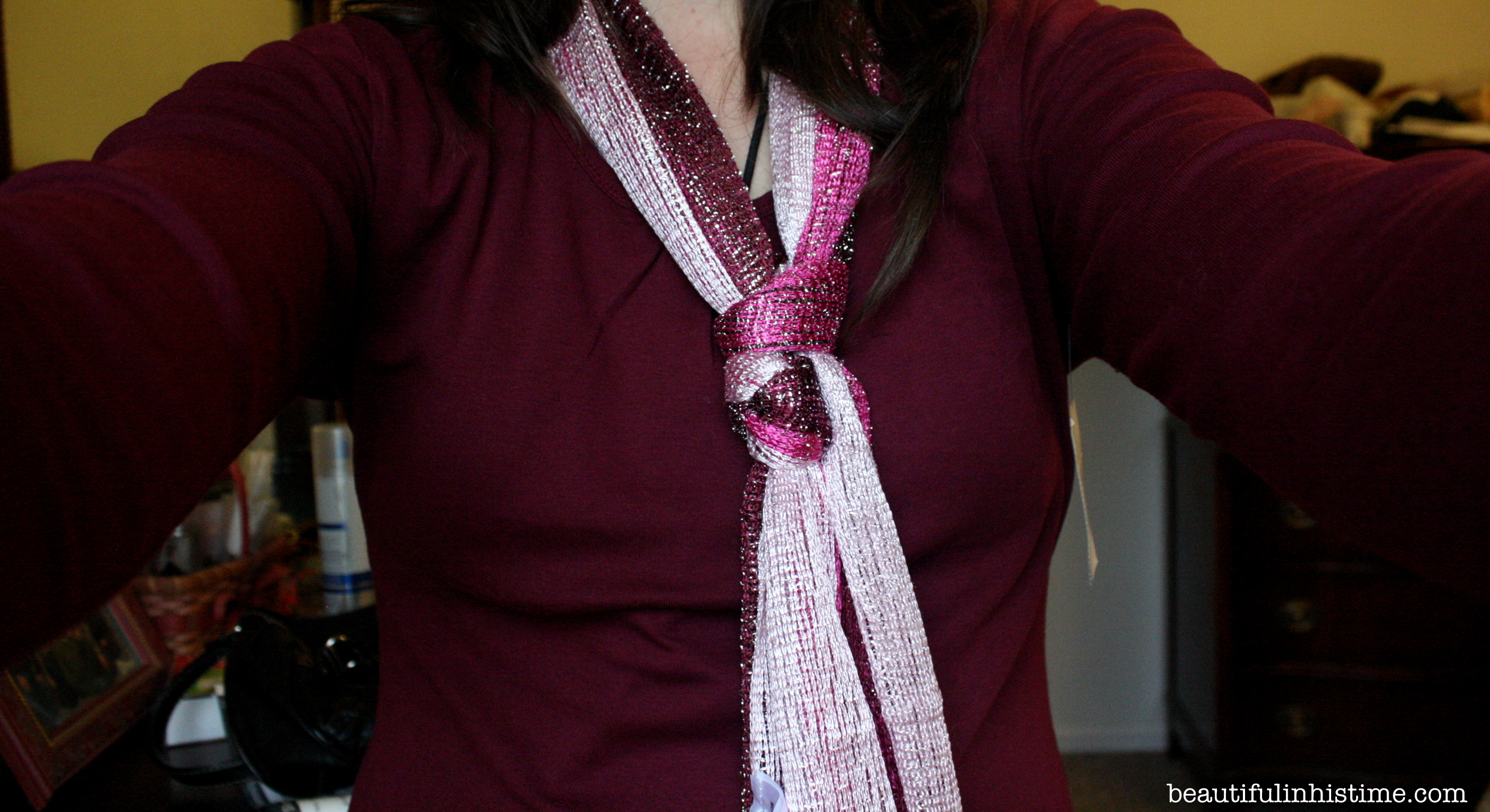 Then this one…another $3 top and this scarf in my own variation on this “wrap and tie” knot (basically wrap, without the tie). Russ says I look “trendy cute.” (Don’t mind the price-tag sticking out of my armpit…realized that after I took the picture!) 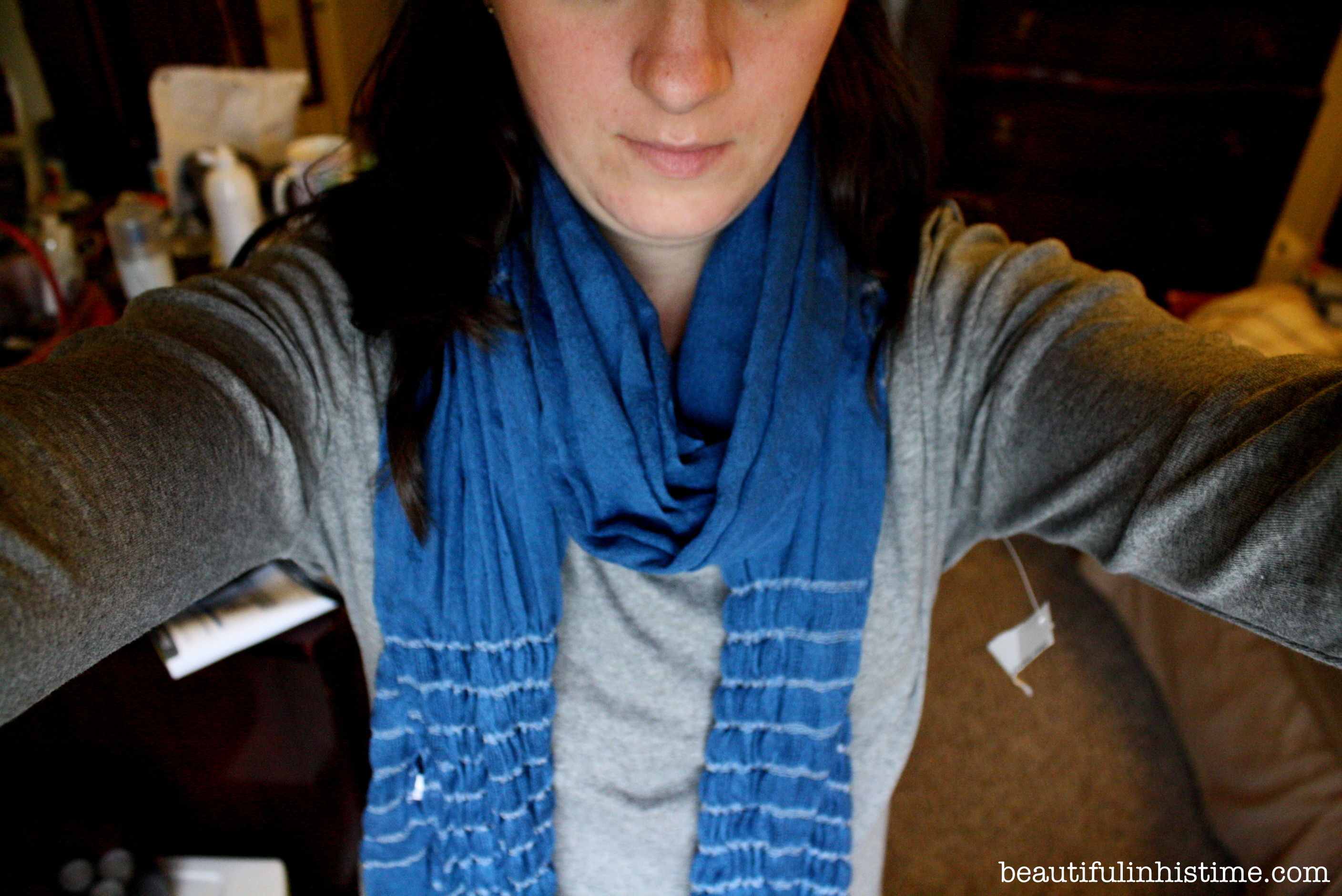 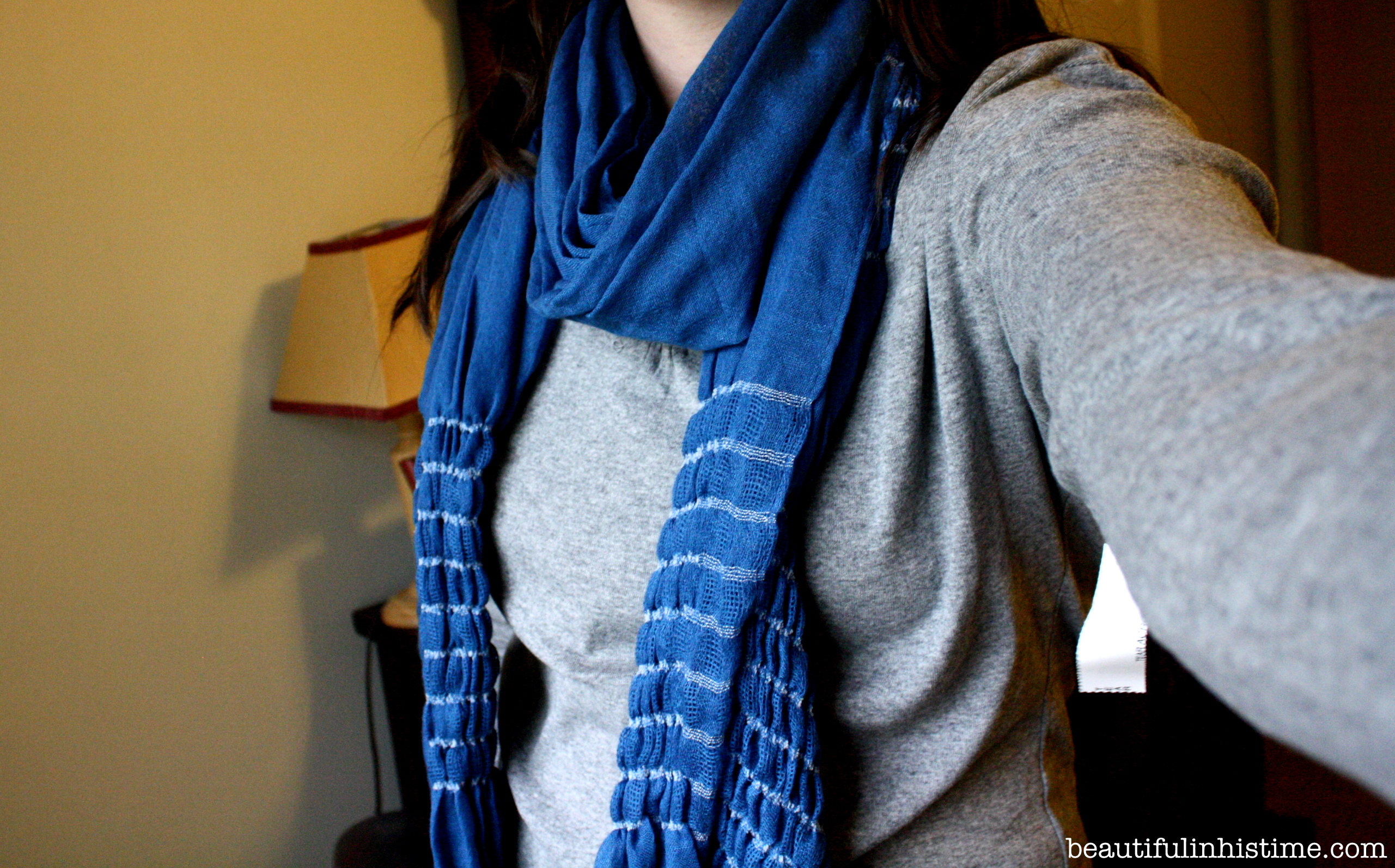 It’s kinda neat I guess. I look at the photos and I feel cute…but it’s still kinda weird wearing the scarves because it’s not “me.” But, I do feel like I’ve taken a step away from “hello I look like a foooooool!!!!!”

So now I have a few cute outfits to wear to the conference where I will try to forget the fact that somewhere out there people are watching me to make sure my heart keeps working properly.

P.S. I think that scarf-wearing-mommies are cute in theory, but really…how impractical do you want to be today? (Another reason why I shake my head at “What I Wore” posts on “mommy blogs”…I just don’t get how they function in real-time motherhood dressed in cute outfits like this…but that’s a topic for another blog post.) 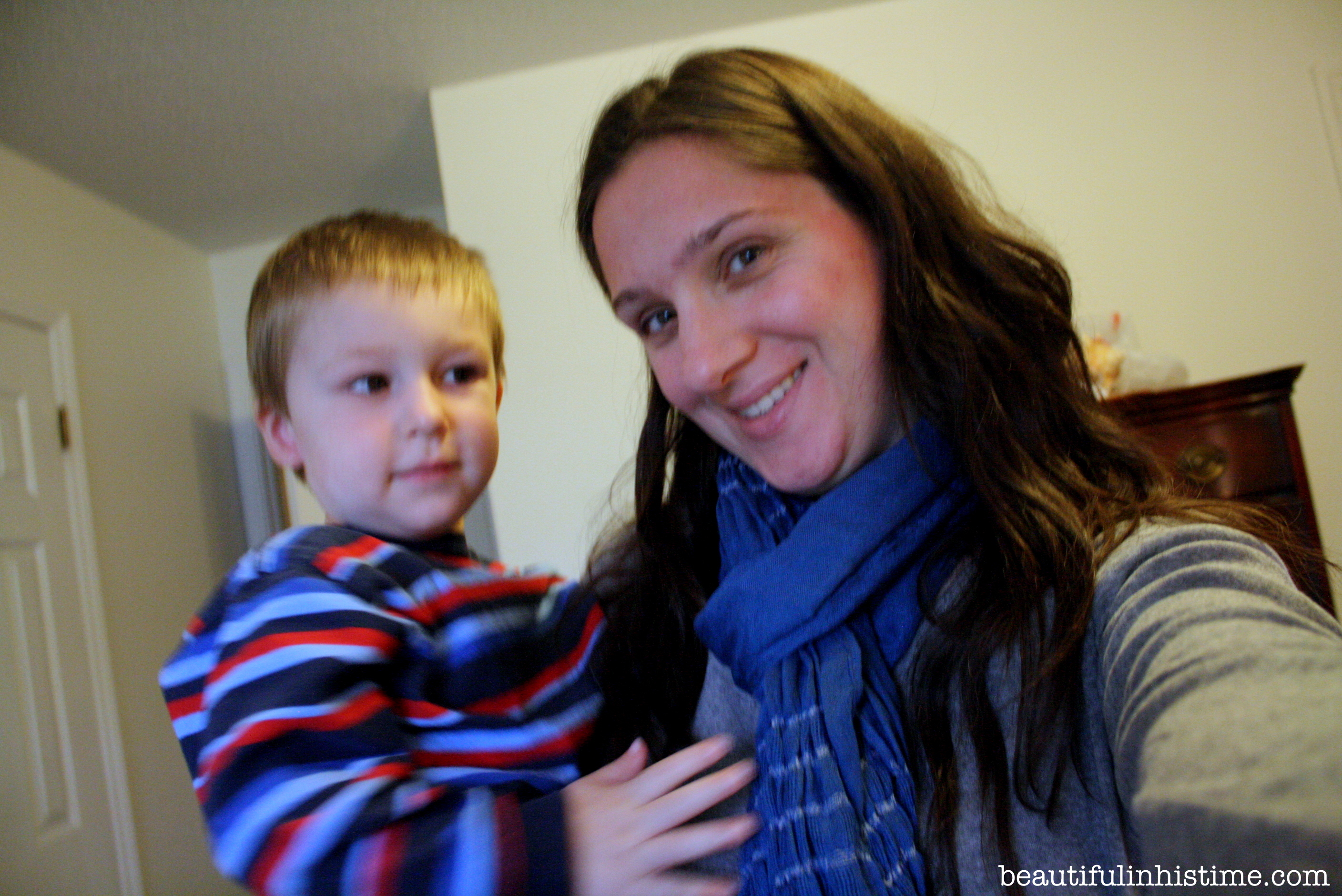