I’m sitting in front of my computer almost on the verge of tears…tears of joy, tears of awe at both the goodness of God and the miraculous power of His timing of events in my life. I could probably (and most likely will) fill multiple blog posts about all that God did for me during and through the PWOC International Conference 2012. But before I share those things, I would like to share a little bit of background as to what PWOC is and what it means to me personally.

As my husband nears the end of his term in the Army, I’ve been doing a lot of reflecting over the last six years. I have very mixed feelings about the Army and our decision to re-enlist in the first place, which happened simultaneously with the decision that led us into our relationship as a couple. My husband has struggled to find his place in the Army and has decided that it is time to leave the military behind him. The things we have endured during our time in the military have left deep scars in our hearts for which we are still struggling to find healing. Some of the wounds are still very tender and fresh. Some days I shake with anger at the hurt…and have to pray to God yet again for forgiveness and healing.

But as I reflect on the last six years of my life, I can see that God’s hand not only led me down this path, but has used this path to refine me, strengthen me, change me, and above all, teach me to embrace His grace.

Six years ago I was finishing up my second year at an independent, fundamental, Bible-believing Baptist college. I knew what grace was…God’s unmerited favor. But my understanding of grace extended only as far as my salvation. While I knew that God’s favor in regard to my salvation could not be earned, I was still living the rest of my “Christian walk” out through a spirit of legalism. I had been taught that in order to be “right with God,” or in other words, be viewed in His favor, I constantly had to evaluate all of my actions to see if they were in line with Scripture. My heart was inherently deceitful and desperately wicked…in need of constant repentance.

So I lived in a reality that was somewhere between a state of absolute fear that I was doing, thinking, or saying the wrong thing and losing God’s favor–and a state of inflated self-righteousness because I knew I was obeying all of his rules and doing everything I could possibly do to be close to Him. I tried hard to stay humble, but I looked at others and judged when they didn’t live the way I did.

Being a military wife has not only drastically changed my view of grace, but my view of God, and of myself. Within four months of marriage I found myself living completely alone in Texas (over a two-day’s drive from my closest family member) while my husband left for a year-long deployment to Afghanistan. I had also just miscarried our first child. Suddenly, prayers and Bible study became less about following every “jot and tittle” of Scripture to earn God’s favor through self-righteousness and more about sheer survival. Sometimes a “God help me through this!” was all I could muster.

Sometimes I would spend a couple of hours in the middle of a Saturday night instant messaging my husband who was struggling to find God’s presence in the midst of a war zone…I would find myself too emotionally and physically exhausted to even muster up the energy to go to church a few hours later. I would stay home in my pajamas and sleep and cry, just trying to recover and find the strength to do it all again the next night.

Near the end of my husband’s first deployment in 2009, I made some friends through a website called Christian Military Wives. I found a local meetup and got to know a few of them personally. They showered me with love, grace, and understanding. They made me feel much less alone. Yet they weren’t like me. They all wore pants. They listened to Contemporary Christian music. They used other Bible versions than the KJV. A few of them even had tattoos and drank wine. Yet when they invited me to a military wives Bible study at a local non-denominational church, I went…and there I experienced the love of God in a new and fresh way, with my less-than-perfect sisters in Christ. I felt like I could come to Him with all of my struggles…my depression, my fear, my anxiety, and have Him still grant me His blessings and His unmerited favor. 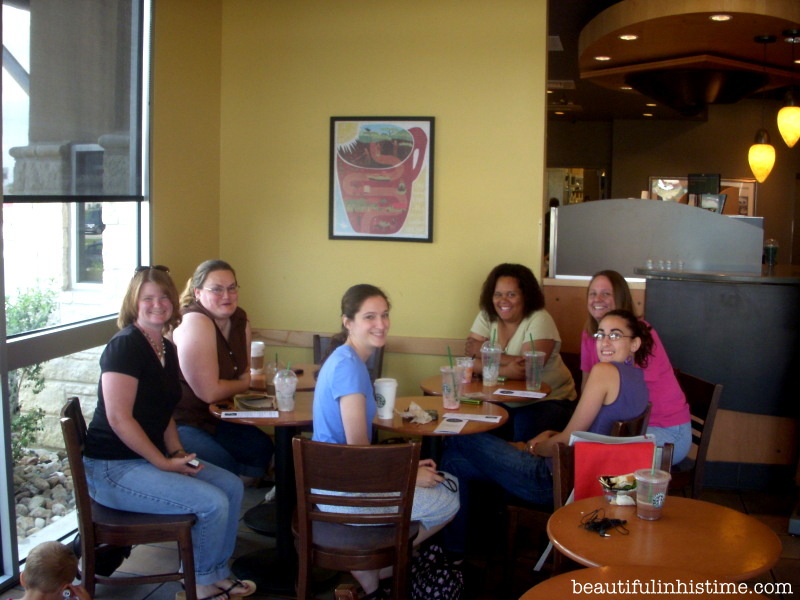 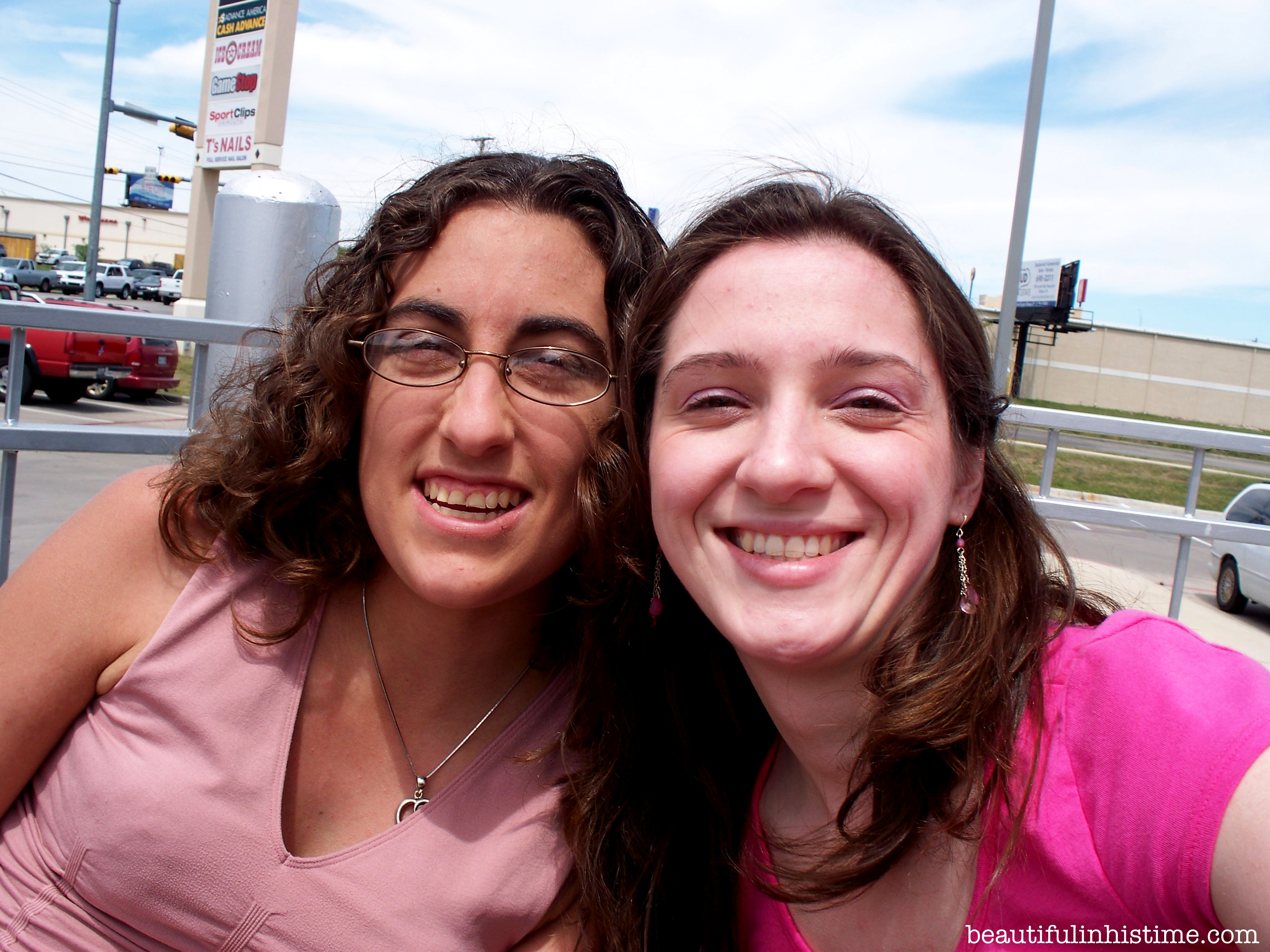 (Me with Stephanie, one of my CMW sisters, at our favorite hangout places, Starbucks!)

But when my friend Colleen invited me to an Army on-post Bible study group called “Protestant Women of the Chapel,” I politely declined. I’m a Baptist…not a Protestant. It was there that I drew the line in the sand to protect myself from the dreaded lure of compromise. 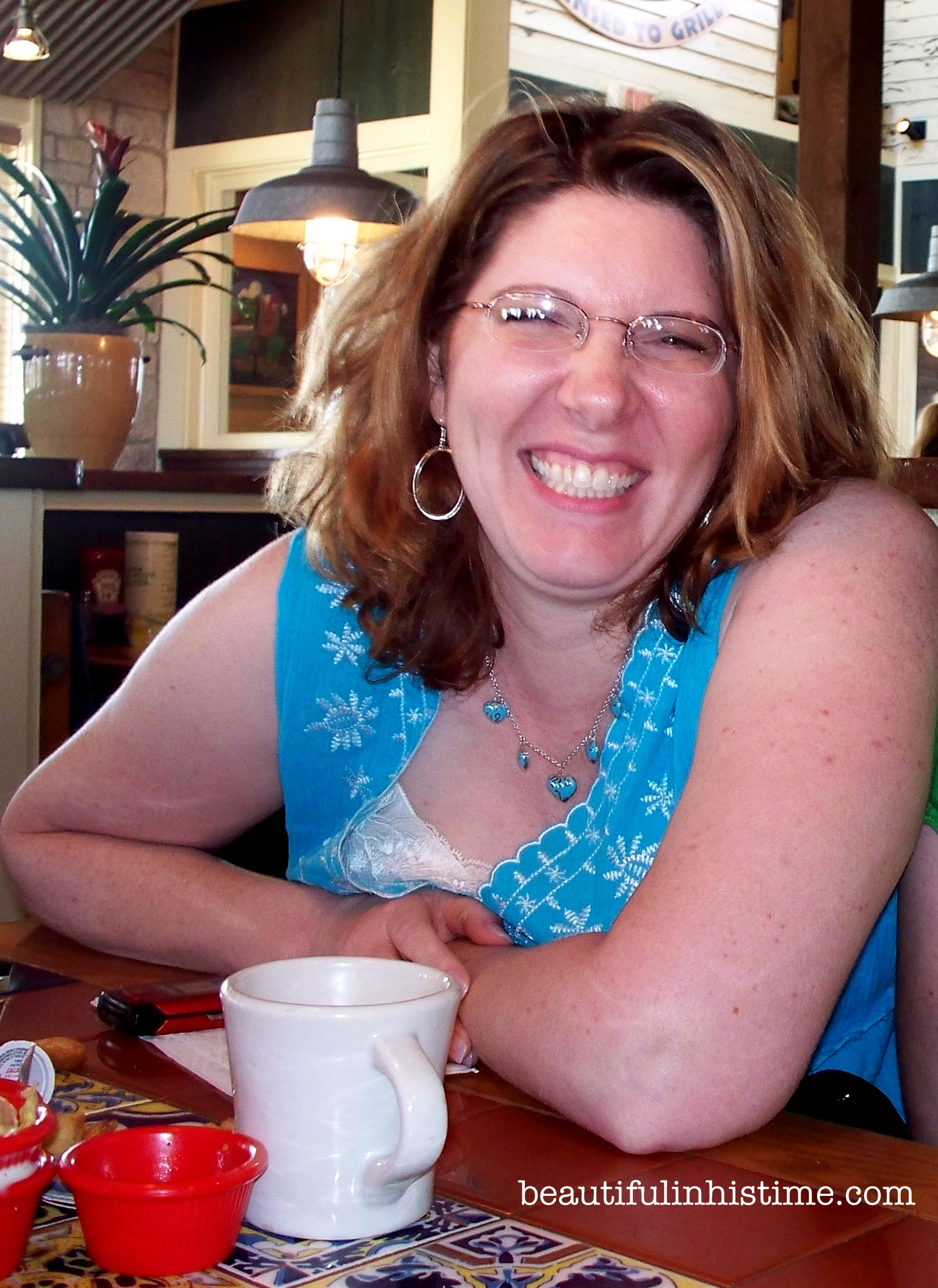 (Colleen, the woman who initially invited me to PWOC)

At the end of my husband’s first deployment, our family changed duty stations and ended up in Kentucky in August of 2009. Our first step was to find a solid fundamental Baptist church to attend. But after a few post-deployment “honeymoon” months, my husband and I began to struggle. There were a lot of deployment-related issues to work through–like severe sleep disturbances, panic attacks for both me and my husband, anger, bitterness, and fighting. For eighteen months, we struggled to pick up the pieces of our “new” marriage that had been broken by war. On top of that, we conceived of and bore our second child, and began immediately preparing for another year-long deployment.

A lot of times we felt alone…there weren’t a lot of military people in our church. And those that were didn’t seem to reach out very much. The more alone we felt, the more we withdrew. I grew bitter against them, against God. My pregnancy left me physically exhausted…we started missing evening services and Wednesday night prayer services. My son’s birth and difficult recovery kept me out of church for almost two months. And then…he left again. And I was alone, again. I had made a few more friends, but a lot of them I had met online through a local Christian military support group that I had started. These friends, too, attended other churches. They weren’t “my kind” of Christians. But my friendships with them deepened because they were my sisters. They were my military sisters, and my sisters in Christ too. They showed me love…and reached out to me when my “good Baptist” church didn’t.

So when a dear friend of mine called me in March of 2011 and told me that Fort Knox PWOC had a scholarship available to attend their local retreat for free…and that it was mine if I wanted, I accepted. My husband was gone. I had an infant who was highly portable. There was nothing holding me back, and I needed some encouragement.

The speaker’s chosen topic for the retreat was “Grace! Grace! Grace!” and how to turn to God in spite of the worst circumstances, in spite of our sinful lives, and beg for His Divine grace. For the first time I was around women who raised their hands in abandon while singing “praise and worship” songs to Christ. It was weird. I felt out of place. And yet, there again, they embraced me with loving arms.

The loving spirit and unmerited grace that I received from these women impressed me so much that when the fall semester of PWOC started, there was no question in my mind that I would go. Somehow over the course of two years I had stopped seeing “BAPTIST distinctives” anagrams in my head and started just seeing women…sisters in Christ. Women who were thirsty for the Word of God. Women who longed for His will in their lives…for His grace. Women who embraced me when I was struggling to find God in my life, in my pain. 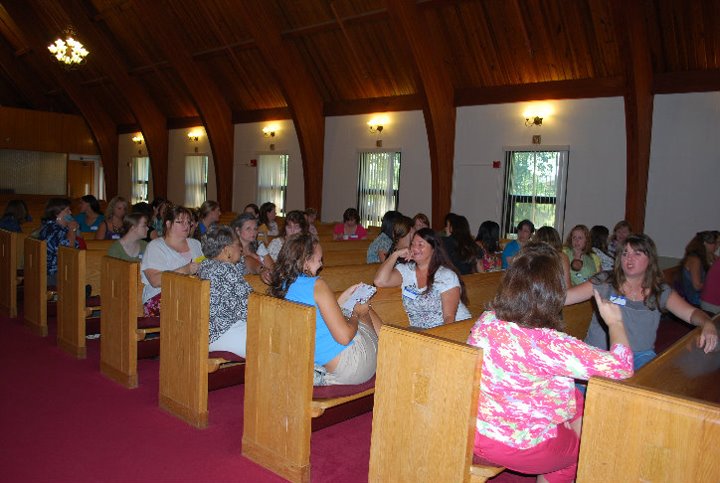 Chaplain’s wives from multiple denominations have prayed with me and over me for God’s protection for my husband. For forgiveness and healing in my marriage. For strength in motherhood. For release from the bondage of bitterness against those who have hurt me. For healing from the scars of war. I started attending Bible study hungry for God’s Word again–hunger that I hadn’t felt in almost six years. I got convicted about sin, and yet was able to embrace God’s grace to cover those sins in a way I hadn’t seen it before.

The last year during which I have attended PWOC has been full of such emotional and spiritual growth–the difficult, painful kind. The kind of growth that is watered with sweat, tears, and the rains from the storms of life. And my military sisters-in-Christ have embraced me and their love has shone like the sun through the darkest hours of this last year of growth and change. 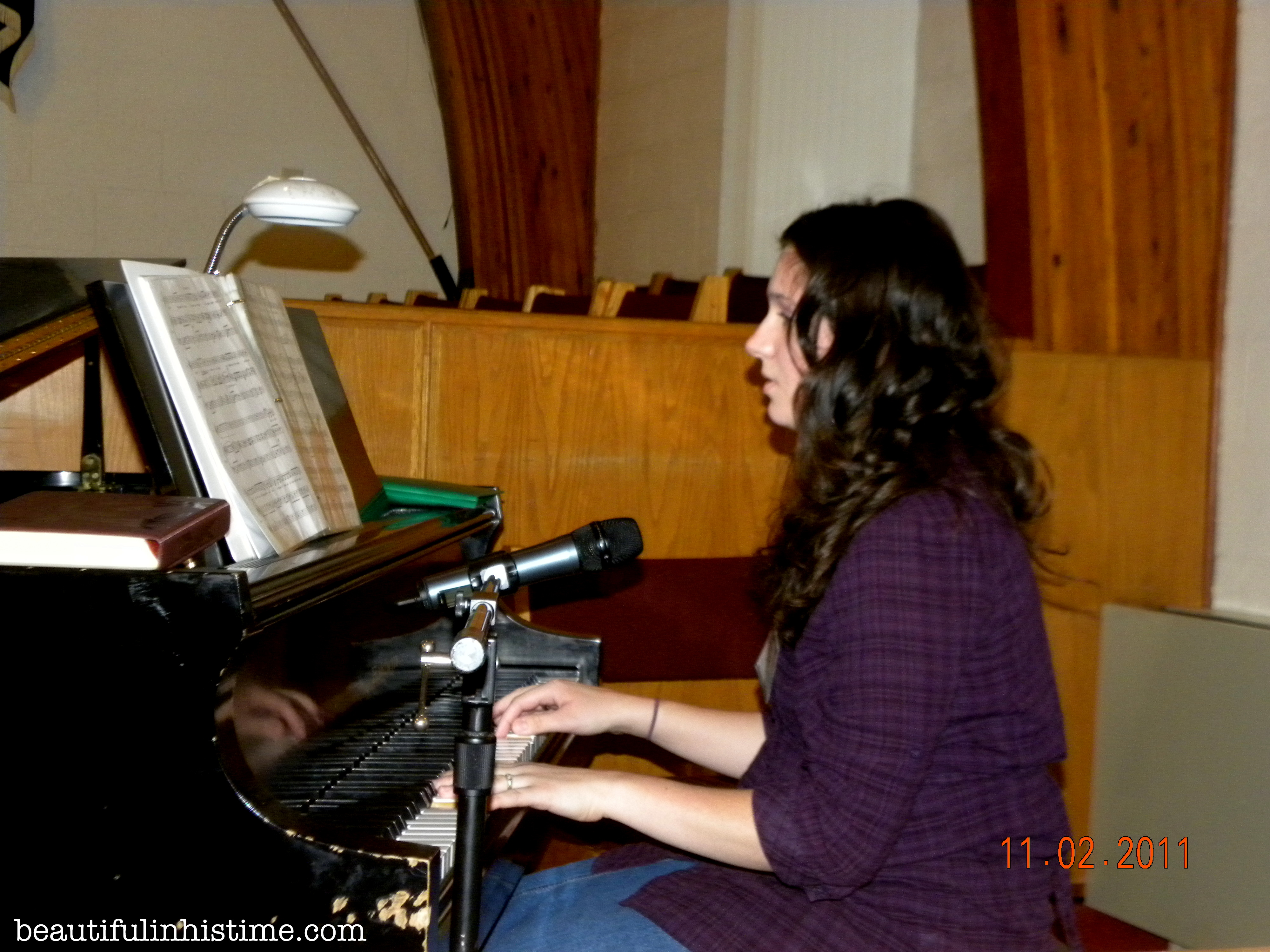 (Serving in music for the Fort Knox PWOC)

Over this past weekend I had the privilege of attending the PWOC International Conference, a bi-annual event where military wives from all over the world gather to worship God, be refreshed in His word, and be trained to serve others. Over 1400 women were there to be reunited with sisters from past duty-assignments, military sisters-in-Christ who they hadn’t seen for years. 1400 women stood and raised hands to Christ in praise…thanking Him for his unmerited, unearned grace that has brought them through the darkest hours of military life.

As military wives we have stared death and war in the face year after year. We have said final goodbyes to the husbands of our friends. We have seen our own husbands come back wounded and permanently broken. We have struggled for emotional survival, one painful day at a time. As this this is the life that I have lived for the last six years…somehow all the small issues that kept me separated from my sisters “across the aisle” have slowly become less important. Because my sisters have pointed me back to my roots. Not to a set a rules. Not to a church. Not to a denomination. Not to a faction within fundamentalism. But back to God and His endless, unmerited Grace. They have gently shown me, reminded me, that I cannot function apart from God. They have invited me to go to His well of living water of lovingkindness…not to work for it, or live in fear that I am undeserving of it. But to drink freely. To embrace God’s wonderful grace.

My chains are gone
I’ve been set free
My God, my Savior has ransomed me
And like a flood His mercy rains
Unending love, Amazing grace!
(Chris Tomlin)

Pin this to share my story and spread the word about PWOC:

Advice for those leaving Christian fundamentalism or an abusive church

Accepting grace means letting go of your own goodness

No Matter What, I Believe: On Broken Faith and Healing Birth