This post has been burning a whole in my proverbial pocket for the last few days – well, make that months.

I had a “one word” for 2013, and I plan to update you all on everything that happened with that word (because it’s a really neat story).

I was sitting on the floor yesterday playing cars with my son. We were supposed to be headed to the post office, the grocery store – running errands, being productive in spite of the illness keeping us away from our cancelled plans. Following our normal routine, which is 1) do stuff in the morning 2) lunch 3) nap.

It was past the 10 o clock hour. Tick tick. 20, 30, then on into 40 minutes. I could have forced said squirmy child into my lap to put on clothes. I actually offered him the chance to stay in his pajamas – settling for him just putting on his shoes. But he said, “No, we have to play cars!”

So I was sitting (sometimes lying) there on the floor. And it was that moment when the word whitespace came to me.

I need more of this.

Other words that were runners up:

These words tumbled and tossed in my brain which was completely free to think because playing cars doesn’t take much thought, especially when the three year old is doing most of the work and I’m just sort of…there.

But it wasn’t just that moment that led me to the word. It’s been a culmination of a lot of things.

I suppose it started in January, when we started getting rid of possessions to prepare to move into a 2 bedroom apartment. LOTS of possessions. About half a wardrobe worth of clothes. Stuff. Just so. much. stuff. The piles kept growing, the trips to Goodwill kept being made. And from January to April somehow we were able to squeeze from an almost 1200 square foot house (with external storage) that was jam-packed full of stuff into an 853 square foot apartment.

The spring and summer months exhausted me as we got out of the army and moved to another state. I jumped into this new life 100% and topped it off by writing a difficult 31-post series about my past. And then I got to August and crashed. I took a good look at my schedule and realized something had to give.

But in all of the busy-ness, that Still Small Voice has been calling me slow down and smell the roses and stop doing all. the. things.

Then, going back to the stuff. Our financial situation has been such that my perspective on stuff has totally shifted. What’s the purpose of stuff that sit on a shelf when you are worrying about paying for car repairs, taxes, and groceries? I look around and shake my head because even after all of the things that we got rid of to even squeeze ourselves into this place, there’s just still so. much. stuff. Decorations, collectibles, books unread, CDs not listened to. And it just looks like clutter. It makes me feel like the walls are closing in and I can’t breathe.

So, what started as trying to get money on eBay for some of Russell’s Army things that he no longer has use for has turned into a get-rid-of-stuff rampage that has helped keep our savings account from tanking completely.

The MOMS group at our church has been working through the book and Bible study 7: An Experimental Mutiny Against Excess by Jen Hatmaker. Our leader has asked that we keep our personal experiments and applications from the study study off of the internet and amongst ourselves (which as a blogger has been hard for me to do, but I respect her reasons and will abide by her request). But let me just briefly say that in the first three months (the categories of food, clothing, and possessions) the message keeps coming through:

And in the categories to come (spending, media, waste, and stress) that our group will delve into between now and next summer, I know God still has a lot in my heart to do.

Adding to the pile of things-making-me-crave-whitespace was a (no-longer-available) e-book I read by my friend Dana Butler, Stillness Manifesto: A Call to NON-Action (Complete with Step-by-Step NON-Instructions). Her book is all about taking a fresh look at what people like to call “quiet time” with God. And how sometimes it’s not so much the prayer and Bible reading that God wants from us as much as stillness and communion.

The practice of stilling ourselves before the Lord is actually disciplining ourselves to CEASE striving and performing. The goal is resting in His nearness.

Then there’s Marian from a la mode, who has spent the last few months taking her family through some radical changes that she likes to call “the art of underachievement.” She’s talked about saying no to commitments and allowing herself space and stillness. And her long, rambling posts have made me crave what she is experiencing.

Finally, it was a brief line in our church’s Christmas cantata (a cantata that is being performed at this very moment as I write but I am unable to sing in because of illness) that brought my heart to this place I find myself in tonight. In context, the words are meant to be a simple salvation prayer, but these simple lines stirred me every time I heard them. I could barely sing them one time without my voice catching and tears threatening to spill because there was just something about them that captured everything I crave – for my heart, my home, my mind, my family: 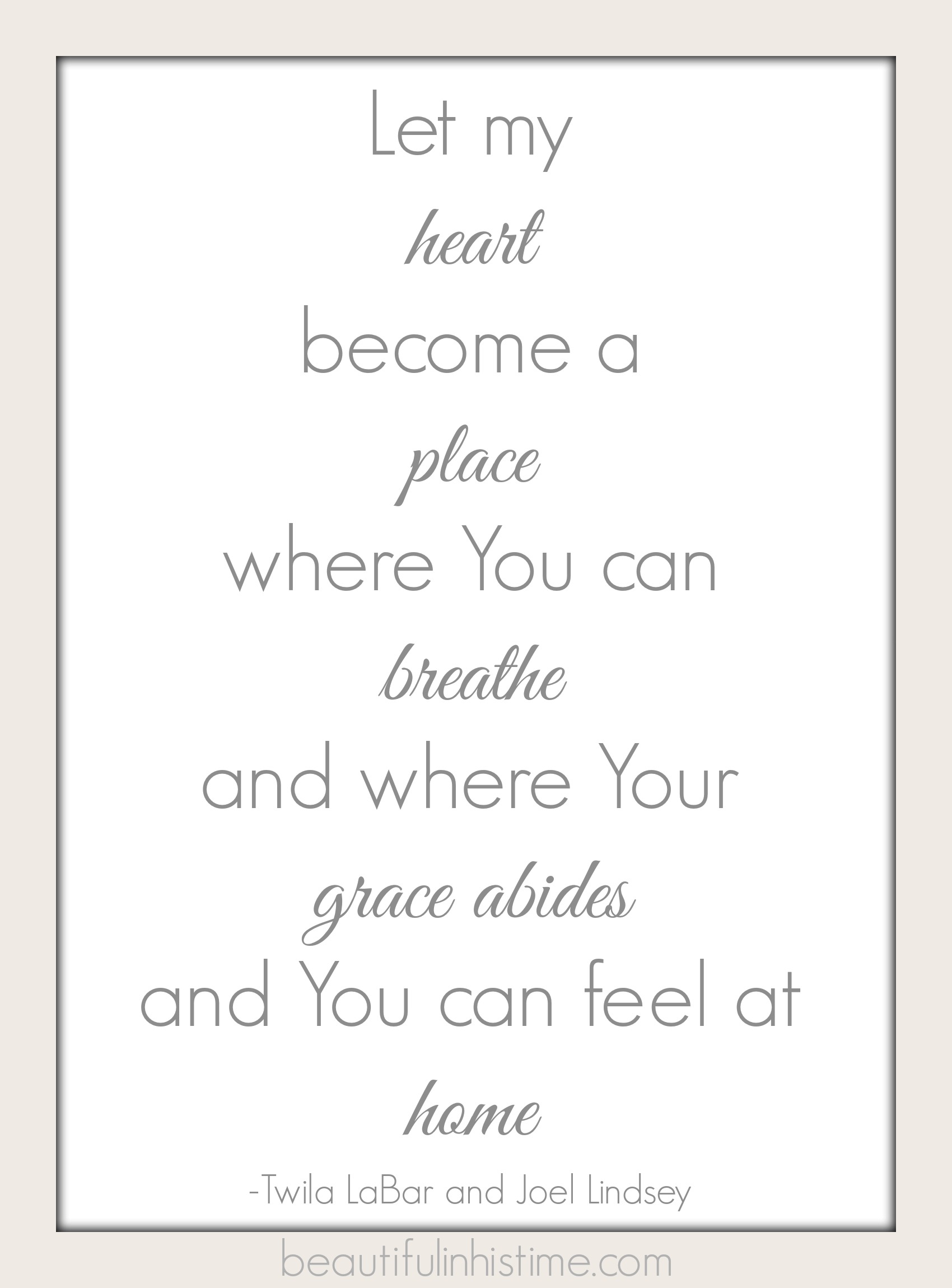 My hope and prayer for 2014 is that there be more margin in my schedule, more blank spots on my calendar, less clutter and mess in my home, more stillness in my spirit, more breathing room in my mind, and more room in my heart for God.

More black and white of pen and paper, the keys of a piano pressed in worship and stress-relief, and the printed words of Scripture. Less media mess and color. Deeper connections with a smaller group of friends and less time trying to impress acquaintances, contacts, and followers.

I feel like to have goals or lists other than what I’ve already listed would fight against the very spirit of whitespace. So I won’t be making any, at least for right now. 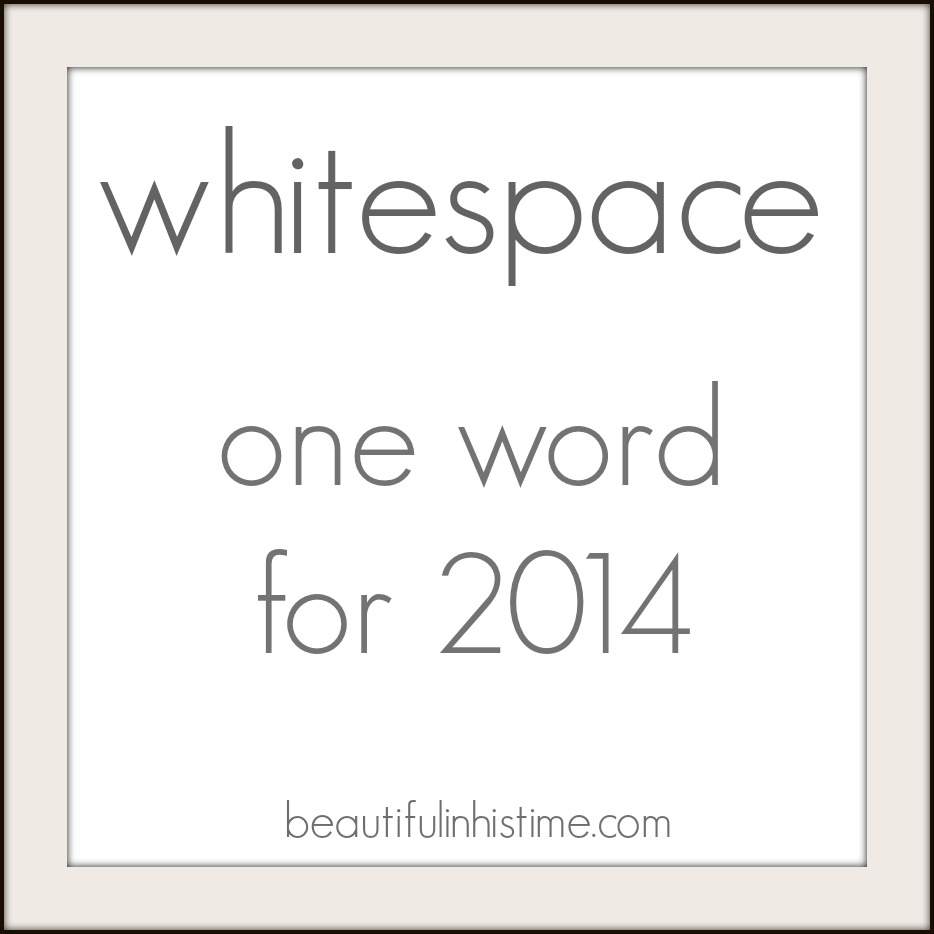