This post is part 22 in a blog series that I have entitled “the wilderness between legalism and grace,” in which I share how I came to realize that I had an incorrect view of God and self and how I became free of the system of legalism whereby I was trying to earn God’s favor. You can view all of the posts in the series here on the series landing page.

We joined the church early in 2012. We were new members, but eager to get involved.

I immediately joined the choir, and shortly thereafter I let the music director know that I was available to serve in other capacities in the music ministry. Special music, offertories, and accompanying.

Several weeks, if not a few months, went by.

This wasn’t a big church with hundreds of people in already in place and positions filled. It was a very small congregation and there was definitely room to get involved, and I was willing, but no one had approached me since I had offered to serve.

Finally, I got a bit impatient and again went to the music director letting him know that I desired to serve in music capacities.

He said something along these lines, paraphrased, except for the section in quotations:

I remember you coming to me before, we just want to give it a little bit more time. “Choir is more of an entry-level position,” but we try to be very careful about who goes up behind the pulpit to sing specials and such…to make sure their life lines up with what the church teaches. 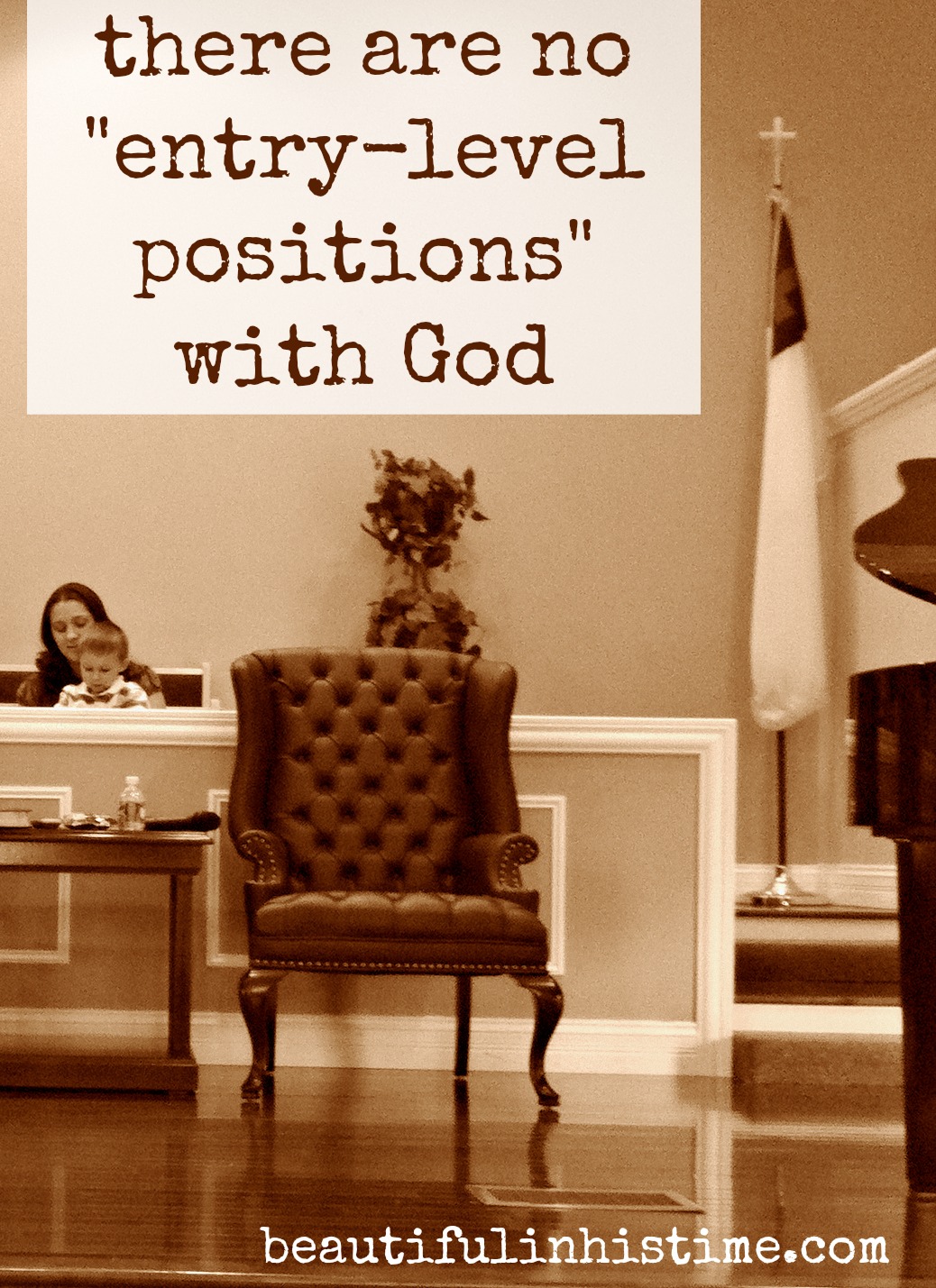 I was honestly shocked. I had heard about “protecting the integrity of the pulpit” before in other congregations, but never before had I heard the term “entry level position” in terms to serving in the church.

This did several things to my psyche:

1. It made me feel like I was on probation – like my every move was being watched to see if I was “good enough” to serve. Being a member of the congregation wasn’t good enough. While I was in church I felt like I had feign super-spiritual posture and attention in the services. I wondered if skipping church services would knock me out of the running. I was worried anytime I ran out to the store in pants, nervous that I might bump into someone who would report me. And I was sure glad that I hadn’t added anyone from my new church to my Facebook page! Sheesh that might REALLY keep me from serving.

2. It made me feel like my value as a “faithful” member of the choir was now diminished, or less important. I mean it’s just an “entry-level position.” A bottom-of-the-totem-pole person. A grunt worker. A private. Someone who hasn’t “worked their way up the ladder yet.” It sort of took the heart right out of the little bit I was doing in the church to serve.

Eventually, I “passed,” and the music director came back and asked me to sing and play, after an audition, of course. He never used the word, but I had to sing and play something for him before I was given the “green light” to serve in that capacity. There was also a phone call where he reaffirmed that I make sure my life outside of church matched what the church taught.

This whole situation stood in stark contrast to something that I had experienced a few months prior at PWOC. At my very first PWOC kickoff meeting in the fall of 2011, they mentioned positions where they needed help – music team being one of them. I approached the contact-person after the session and told her I was interested. Her response? “Show up Tuesday at 10am here in the chapel – that’s when we practice!”

Just a few months later I was filling in as a substitute worship leader for the entire installation. The following semester when the current leader had to move away, I took over in her place. 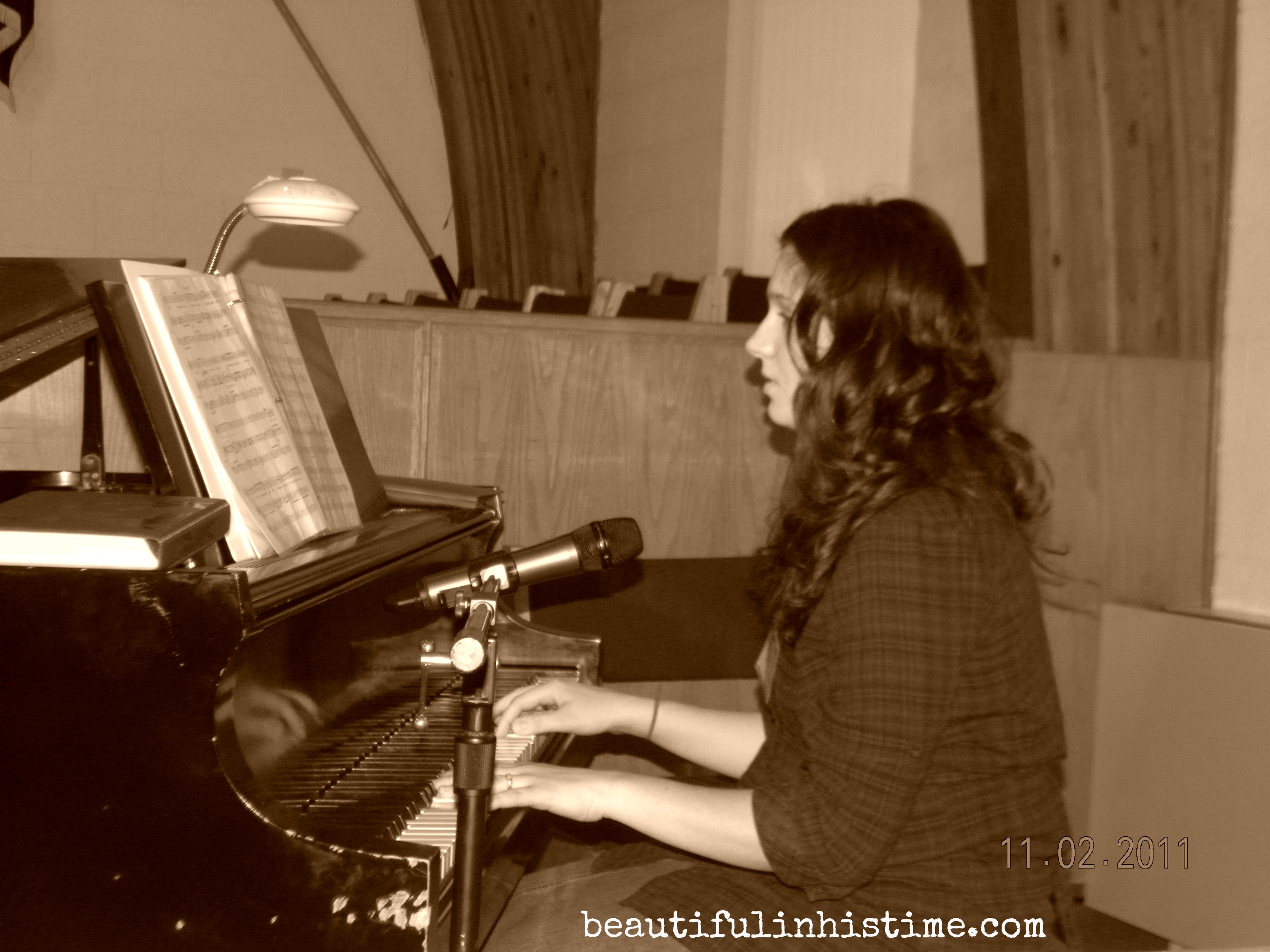 There were no background checks, no trial periods, no waiting-and-seeing.

I was willing to serve and they put me to work, no questions asked.

I know that church is different from a worship-and-Bible-study-group. I know there are issues like church membership to deal with. I believe that pastors have the right (if not even the responsibility) to not let every person that walks through the door up on stage to perform who-knows-what without those people demonstrating a relationship with Christ. (I believe that this is one of the functions of church membership.)

But should protecting our pulpits be more important than letting our own people serve? Should we assign levels to certain positions of service in the church, making some more honorable (or more worthy of protection) than another? Should we put our people under a microscope before we give them a chance to get involved?

I see a harlot being used to save some spies and getting a chance to be in the lineage of Christ.

I see Jesus calling uncouth, naked fishermen and tax collectors and saying “follow me.” I see Jesus putting them to work, immediately – healing, preaching, and working for Christ.

I see a murderer and church persecutor becoming one of the greatest missionaries (and pen-author of half of the New Testament) – called by Jesus himself.

Had Rahab, Matthew, Peter or Paul been in that Kentucky church today, I doubt they would have been given a chance to ever get behind that pulpit.

What ever happened to “Everyone is equal at the foot of the cross”?

I believe that every person who is willing to serve God should be given an equal chance and equal honor. The choir member, the pastor, the nursery worker, the janitor, the sound guy, the soloist, the Sunday school teacher:

All equal-level positions in God’s eyes.

But now there are many members, yet but one body.

Nay, much more those members of the body which seem to be more feeble are necessary.

And those members of the body which we think to be less honorable, upon these we bestow more abundant honor; and our uncomely parts have more abundant comeliness.

For our comely parts have no need, but God hath tempered the body together, having given more abundant honor to that part which lacked,

that there should be no schism in the body, but that the members should have the same care one for another.

Legalistic “Fundamental” Christianity gets so obsessed with this pristine perfect picture of what a “good Christian” should look like. They are “beautiful people,” feeling like they are entitled to more honor because they are “closer to God” or “living more holy.” They guard their pulpits so that only the best of the best can dare stand behind to bring truth or encouragement to the body.

And we wonder why more people aren’t comfortable in church…

Let’s start caring more for our people than our pristinely protected pulpits. Because there are no “entry-level” positions in God’s eyes. There are no ladders to climb to make us more important than another Christian. We are all depraved sinners who need God’s grace. The only goodness you have doesn’t come from you, it comes from the righteousness of God that’s been imparted to you.

That should make you feel humbled, not entitled.

And that should make you want to extend the grace you’ve been given to others, instead of looking down on them, waiting for them to measure up to your precious “standards.”

Discussion time! Have you ever heard the phrase “entry-level” used to describe a position of service in the church? Do you think that there is too much focus on “protecting the pulpit” and not enough focus on reaching people? Have you ever been told you weren’t “good enough” to serve in a certain capacity? I’d love to hear your thoughts!

Next post, part 23: “Sitting on the premises” – sometimes, it’s okay not to serve