I have 37 minutes to write. This day has gone by way too fast. I have gone from carving out every minute of whitespace that I can find and squeezing everything I can into them to having close to 20 hours of space each week that is mine, all mine, to use as wisely as possible.

It’s overwhelming. My brain is scattered and even my lists don’t seen to help because I get going on one thing and end up doing another…because I can. And I go to the grocery store by myself (and all the moms say amen) but before I do, I head into a consignment store…because I can. I stay for 15 minutes and don’t buy a thing and now I’m kicking myself for not using that 15 minutes to work on this post.

My brain is exhaling and it’s going to take some time for me to harness and wrangle this time and make it work for me and for this family in a way that is wise, efficient, and practically freeing.

All that to say, I’ve sent my little boy to preschool. 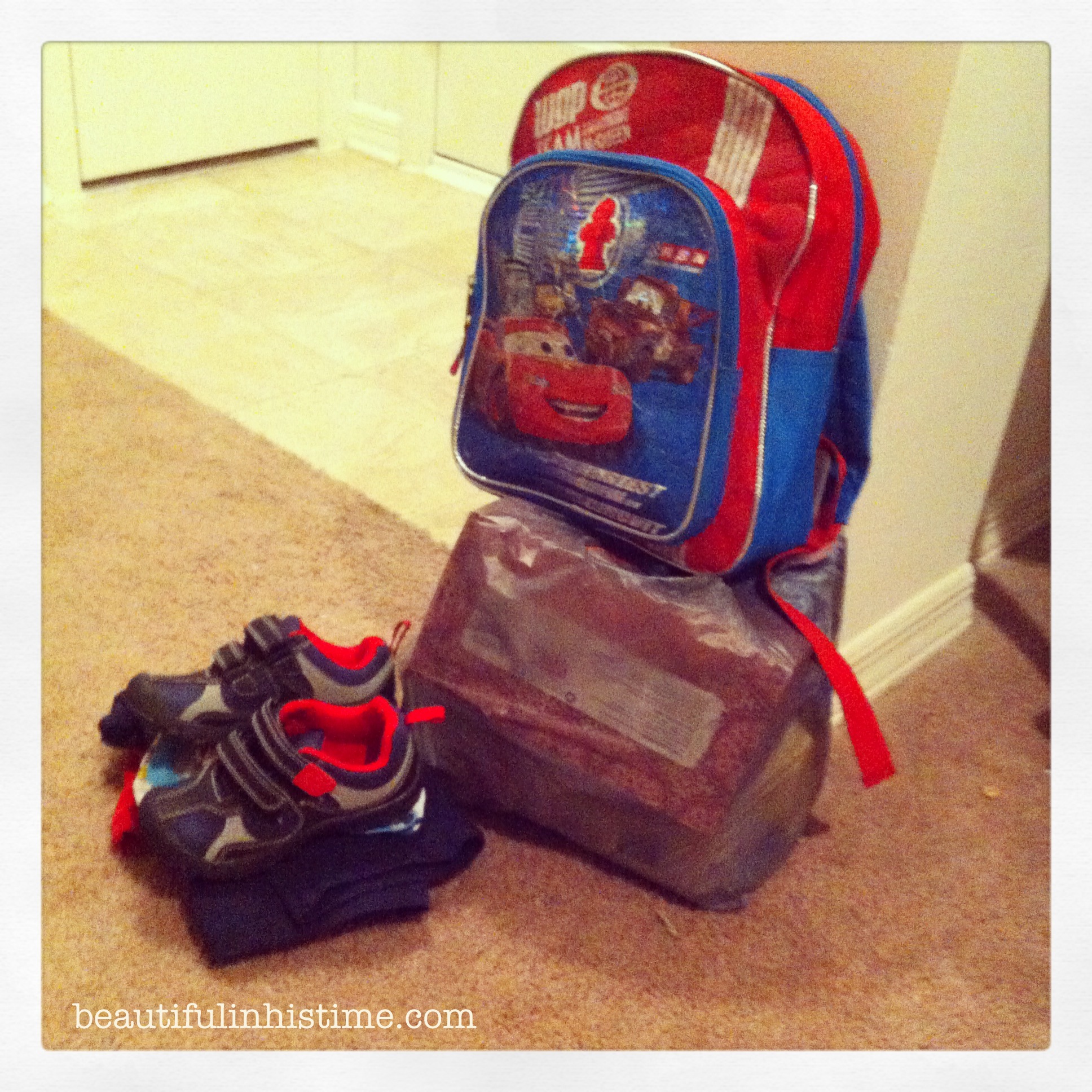 The decision was not an easy one.

During January, we really struggled with our boy. Our apartment was a battleground and everyone was losing. And we took the war with us everywhere we went. My husband and I talked about it a little bit on the blog, in our posts about creative discipline and second-guessing #whitespace, but the nutshell version is this:

Ezra’s behavior was out of control, and very much out of our control. Constant arguing and whining, chronic disobedience, hitting, spitting, screaming, kicking, and completely unresponsive to both gentle, corrective discipline and more punitive forms of discipline. Nothing was working. We were exhausted. I was tired of trying. I was tired of being a good mom.

I woke up on more than one morning with the thought, No God, not today. I just can’t be a mom today.

I had a lot of people offer suggestions. Psychological testing. Routine. Stricter schedule. Preschool. He needs more routine. He needs to be interacting with kids his own age more. He needs to be forming deeper relationships.

I started looking into all of the above.

And in the midst of it all, someone came forward and offer to pay my son’s way to the preschool at our church’s Christian day school.

We filled out the enrollment forms, toured the classroom, and it was all over in a blink. He could start the following Monday!

Throughout that weekend my emotions vacillated between relief, regret, guilt, and anxiety:

Relief – that I was no longer going to be his everything, that he could look to others; that I will have all. the. time to be able to accomplish what needs to be accomplished around the house; that I was going to have freedom and whitespace and quiet and all of the things that this introvert craves

Regret – that I couldn’t make homeschool preschool work for us; that I couldn’t be enough for him; that all of my efforts to get him around other children almost daily weren’t enough because they weren’t the right consistent kind of relationship-building interactions

Guilt –  that I had to send him away because I couldn’t deal with being his mom all the time; that someone else had to come to our rescue financially for him to be able to go 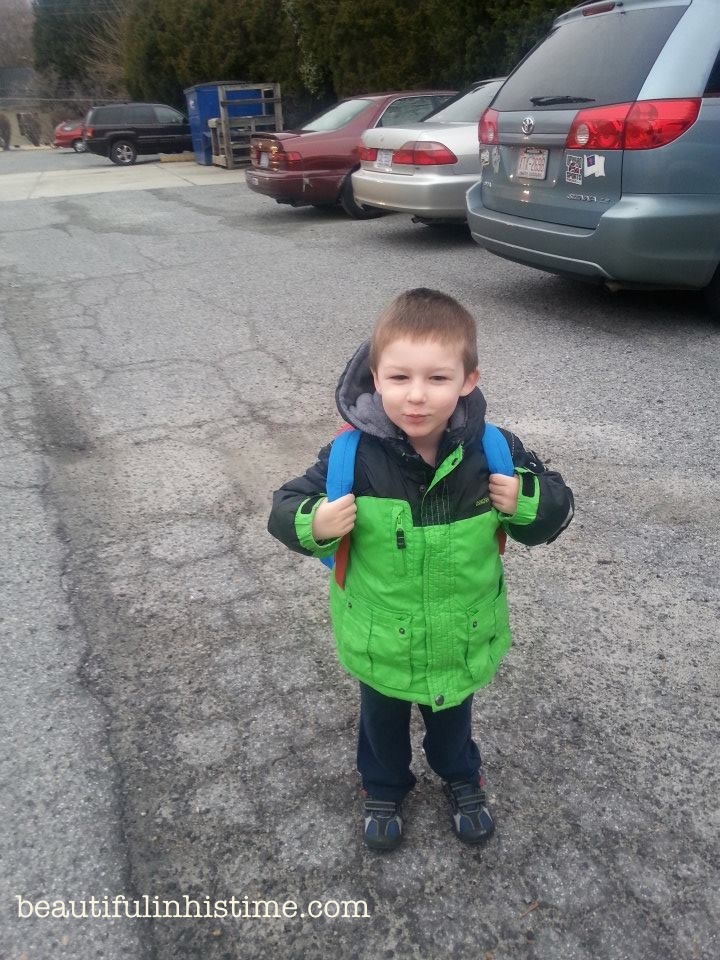 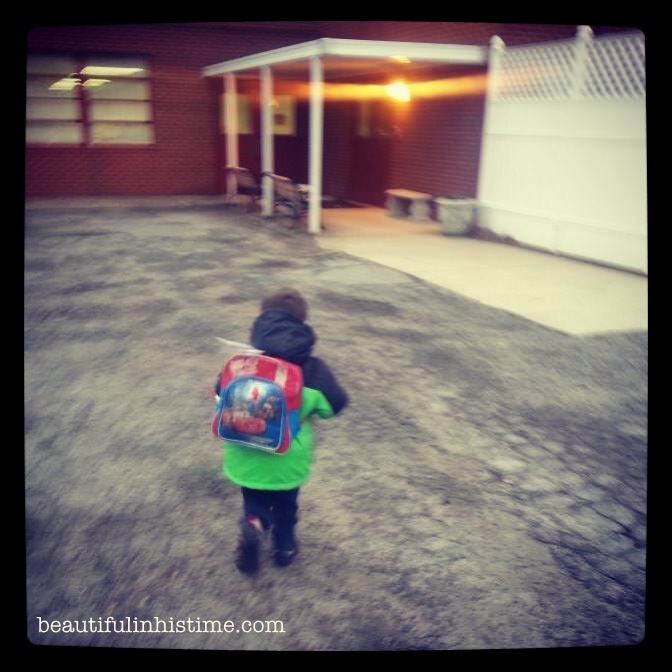 His first day was the hardest, because Russ and I had some medical appointments and meetings to go to – things that Russ needed my support for and I was so afraid that they were going to call me because Ezra wasn’t adjusting well. But my phone didn’t ring the whole day. He had a few issues but nothing major – he did great. 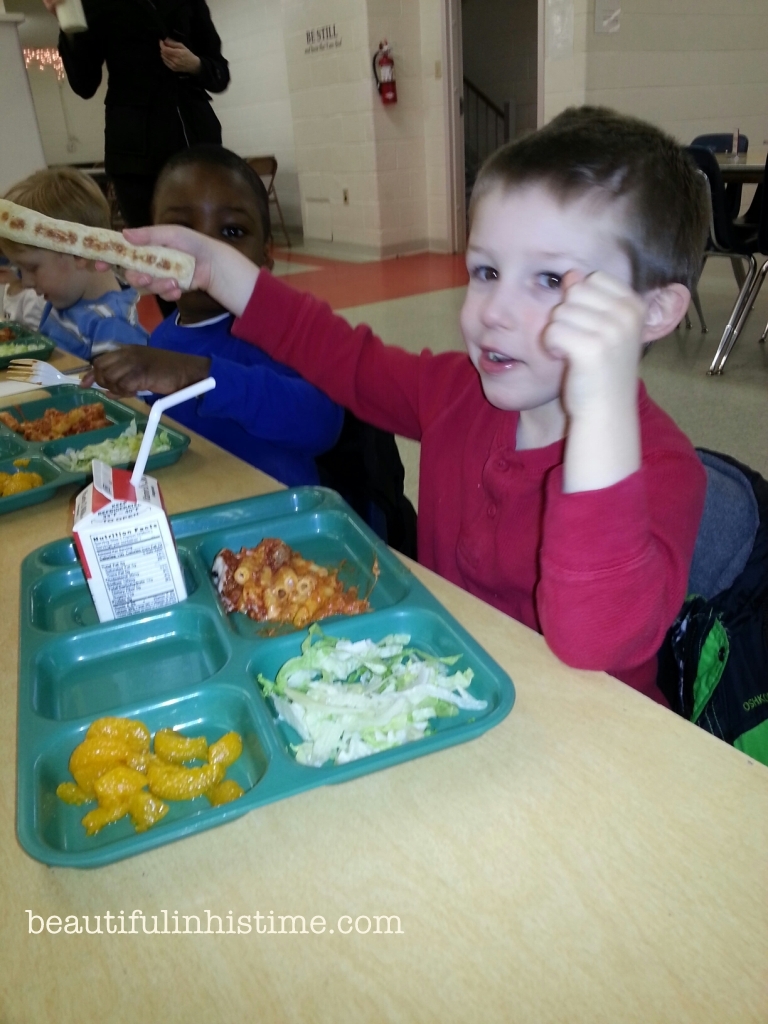 *Super thankful to have friends “on the inside” to send me pictures to set my heart at ease!*

Day two was like heaven. I got so much done it was awesome.

So this is how it feels like to be a sane person again.

And when he came home from school and wanted me to play cars with him, it was easy to say yes.

Then we got snow and we had no school, no moms groups, no Bible studies, no childcare at the gym, no nothing for six long days.

Today is day three. I’ve done a few things, gotten a hair cut, run a bunch of errands, folded a bit of laundry – but the house is still a disaster and the groceries aren’t put away and I have to leave in fifteen minutes to go pick him up.

But at least most of the guilt, regret, and anxiety are gone. Ezra is doing well and he’s happy and he likes going to school and I can enjoy being a mom again. 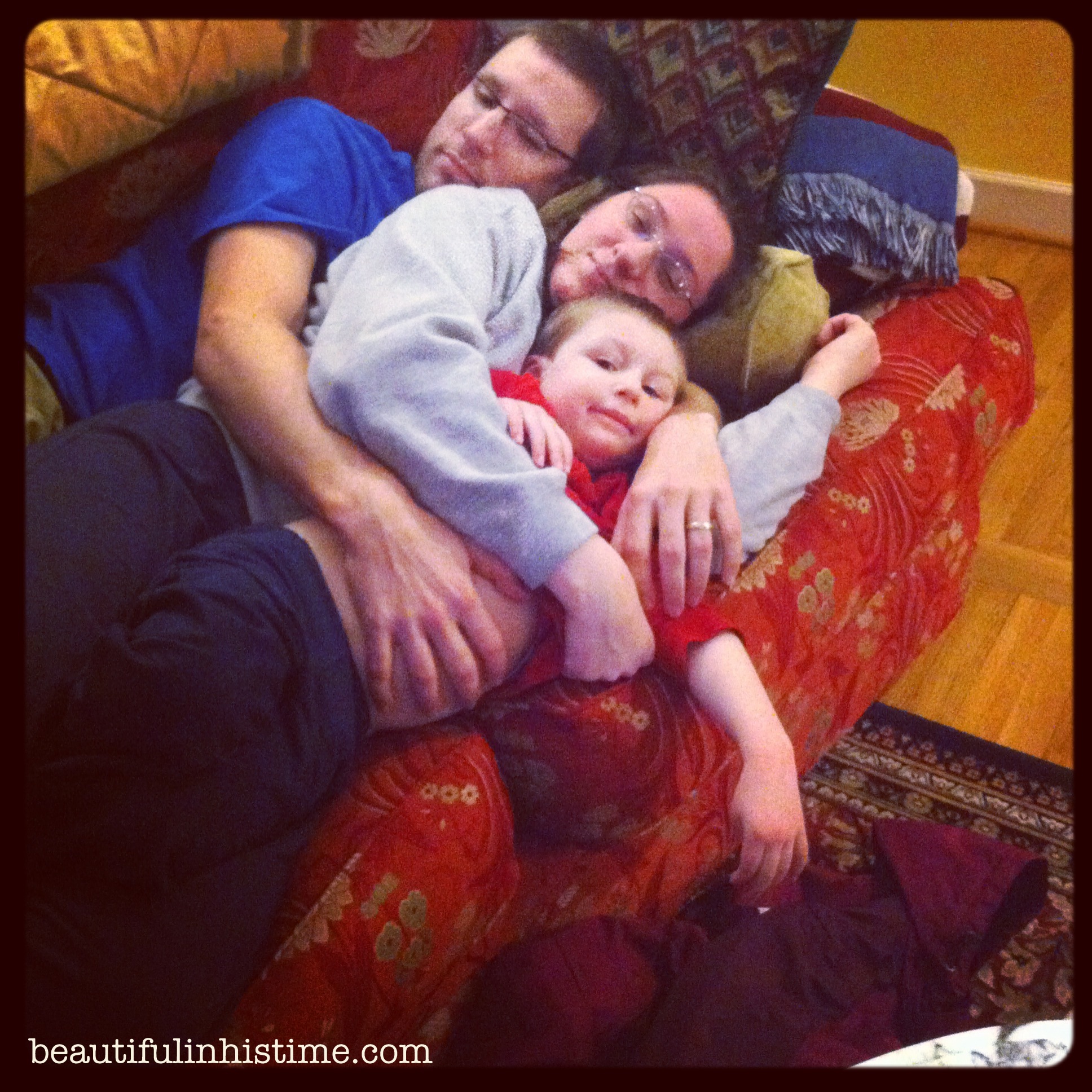 One of the days that Ezra will be in school is also Russell’s day off so we will get to have a day for just us, every week. That in and of itself sounds like heaven (but it hasn’t happened yet because yesterday was President’s Day).

I know this post is scattered and unpolished. I’ve been trying to write it for over a week now and every time I ended up staring at a blank screen because the words just weren’t coming. I don’t feel like they have come together well today – but I guess I’m okay with that because I needed to get it written.

Thank you to everyone who has given advice, prayed for Ezra, prayed for me, prayed for our family – and just supported us through this time of decision making and transition. If you could pray that I would feel less overwhelmed by the free time on my hands and figure out how to make all of this whitespace work for me it would be much appreciated!