This post is part 24 in a blog series that I have entitled “the wilderness between legalism and grace,” in which I share how I came to realize that I had an incorrect view of God and self and how I became free of the system of legalism whereby I was trying to earn God’s favor. You can view all of the posts in the series here on the series landing page.

I’m coming to the close of this blog series. There are several more posts to come and a few wrap-up posts to be written, but I’ve finally written my way to the best part of my story – the moments where I stepped out of the wilderness.

It culminated at a conference. To say that I went to “this one conference” and came away as a new person would be far too simplistic. I hope that this series has demonstrated how much groundwork was laid in my heart before I ever stepped into that the doors of that hotel.

I would never have been able to accept God’s grace…

Without organizations like MOPS and PWOC. Without churches like Faith Temple Killeen and First Christian Church. Without amazing women like Rebekah Dunnam, Mary Bush, Colleen Saffron, Stephanie Duffy, Patti Katter, Jill Bozeman, Jennifer Harki, Stefi Koonce, and Dorothy Platt (to name a small few). Without bloggers and authors like Holley Gerth, Elizabeth Esther, Jeff VanVonderan, and Beth Moore. Without books like Tired of Trying to Measure Up, You’re Already Amazing, and Get out of That Pit.

There were seven long, hard years between the broken hearts and broken dreams of 2005 and the realization of what grace really is in 2012.

I didn’t know it, but by the time I made it to the PWOC International Conference in Nashville, TN in November of 2012 – I was primed and ready to receive what God wanted to show me. He had plans for me beyond what I knew.

I was just going to a conference. He was ready to change my life.

There were several moments over the three days of the conference that, when combined together, brought me out of the wilderness between legalism and grace.

I shared these moments briefly in one very-lengthly post last year when I returned from the conference, but what I’m going to do for this series is to share these moments again, individually. If you have read the previous post, please still read these, because I’m going to be sharing more than I was able to do previously as well as the added perspective of being 9 months removed from these experiences.

Friday morning of the conference, I made my way to the first training breakout session of the conference. This workshop was called “The Real Me.” It was supposedly about identity. I felt like it would be perfect for me, seeing as I had kind of been in the midst of a serious identity crisis for the last seven years. But when I was given the handout, my heart sank. A cursory view of the material told me “…you already know all of this stuff…this is gonna all be review for you…you’re in the wrong place.”

But I was wrong. I was exactly where God needed me to be.

There was a lot of review. We discussed scriptures about who we are as sinners and who we are as redeemed saints of God. But then the speaker gave some of her personal testimony. She had been the good girl. Obedient. Checked all the boxes. Obeyed all the rules.

Boy this is starting to sound familiar.

But then sin dragged her down. She realized that no matter how hard she tried, she couldn’t keep the rules placed upon her by legalism. And more than that, she didn’t want to.

Then she gave one of the most profound object lessons that I have ever heard. She had three sweaters: one pure white, one black, and one beige. She put on the black sweater, saying that it signified the sin nature. Then she held the white sweater over her as if it were an umbrella and said something to this effect (paraphrasing very loosely here):

Then she put on the beige sweater, over the black.

Kim: The beige signifies my righteousness. What I can do in my own power. Keeping all the rules, checking the boxes. I try to hide my real sinful self behind a veneer of good works because I’m scared that if people see the real me, that they wouldn’t love me. But then it’s hard because I feel like I’m being a fake all the time. That I can’t be myself!!!

Oh how I have felt this way a million times over!!

Then she gave a second, more accurate illustration. She put the pure white sweater on first:

Kim: Christ’s righteousness doesn’t just cover us or hide our sin from God. We HAVE been made a NEW CREATURE. This righteous, born-again being IS who we really are. The saved, blameless-in-Christ Kim is the most REAL Kim that I can be.

Then she put on the black sweater, and the beige overtop:

The truth is, that to the outside observer, no one can really see the difference. No one can know if we are doing things out of Christ’s power or our own. But God does.

To simplify Kim’s illustration, let me explain it this way:

There is nothing good about us. We are sinful creatures and there’s nothing we can do to be good enough for a holy God. He made a way for us through the sacrifice of his son.

At the moment we, by faith, accept God’s sacrifice for our sin – his death in our place – God makes us righteous.

For he hath made him to be sin for us, who knew no sin; that we might be made the righteousness of God in him. (2 Corinthians 5:21)

Not our works. Not our adherence to some moral code. Not even how well we obey the Bible. Not how often we go to church or read our Bible.

It is GOD that makes us righteous through the sacrifice of his Son.

And he doesn’t just cover up our sin, like someone would slap a clean coat of paint on a dirty barn. No, he makes us righteous. This word made carries with it definitions of becoming, being made, being finished. He changes us from the inside out.

That righteousness IS the real me, and I had nothing to do with it other than my simple faith.

That, my friends, is grace.

I had memorized these verses in high school. Hidden them deep in my heart.

But I didn’t get them. Not really. Somehow grace was just lost on me…buried under a big mound of rules, guidelines, standards, convictions, and expectations that I thought were making me a better Christian, more righteous, and more holy.

For the first time, I saw myself as I really am:

A desperate sinner saved by God’s amazing grace, made righteous, inside and out, through none of my own works.

When I got that…when I really grasped it, that big weight that I had been carrying around (guilt, shame, expectations, fears) just slipped off my back. It was so simple that at first, I didn’t even realize how life changing it was.

I was just free. Free to be me. The real me. The desperate-sinner-made-righteous-through-grace me. 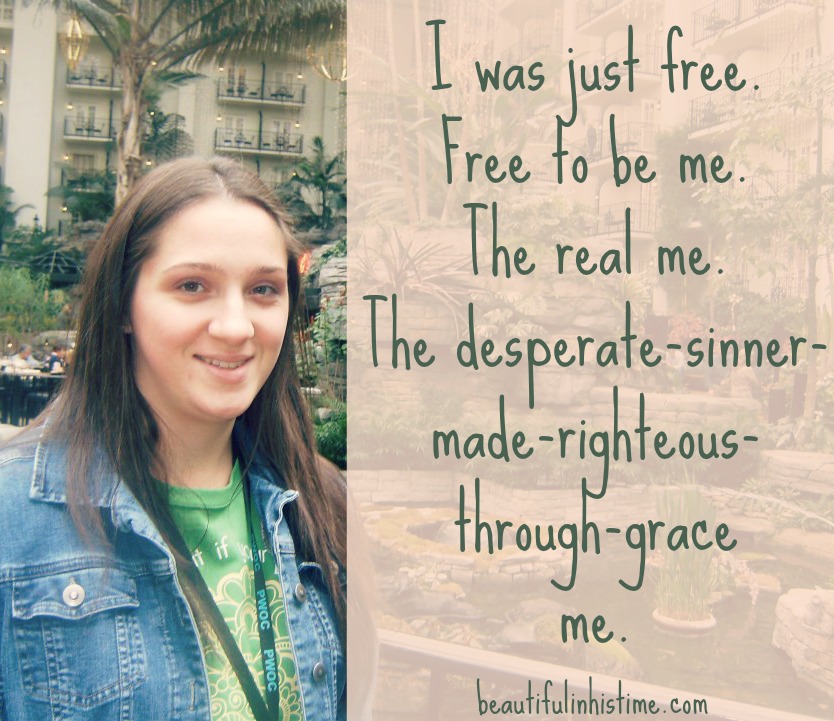 Please come back to read my next post as I continue sharing some moments from the PWOCI conference that brought me to a place of accepting God’s grace.

Buy this song here or listen free with Amazon prime!