This post is part 15 in a blog series that I have entitled “the wilderness between legalism and grace,” in which I share how I came to realize that I had an incorrect view of God and self and how I became free of the system of legalism whereby I was trying to earn God’s favor. You can view all of the posts in the series here on the series landing page. In this post, I talk about a time I felt Jesus calling to me.

I stood on the top deck of the cruise ship in the 10PM moonlight. The shipped rocked gently in the middle of the ocean and the breeze blew gently on my face. We stood a level above the deck where 33 Miles was playing, hopeful that being a further distance away would help Russ handle the concert noise. He stood behind me with his arms wrapped around the tummy that was holding our 10-week-old unborn child.

The song started with a simple keyboard solo. I immediately recognized the song.

For a girl who thought her life was far away from where it “should be,” where “God wanted it to be,” that song struck a tiny bit of fear in my heart.

No God. Not this song. I know I’m a horrible, wandering prodigal child. But I don’t think I can come home just yet, Jesus. I’m not ready to go back to that sort of life.

But then Jason started singing:

What do you see when you look at your world today?
Is it so full of clutter that you feel like you’re going insane?
And you can’t fight back ’cause you’re just too afraid
And it seems like the clouds in your sky don’t wanna change

I got chills and the tears brimmed at my eyes. This didn’t sound like the God that I knew. Oh I could sing “Softly and Tenderly” all day long, but I don’t think I truly experienced it’s truth until that night.

Being held in the arms of my husband with the wind of the ocean blowing my hair, I wasn’t just feeling his arms. I was feeling Jesus calling.

God, I am scared to death. I don’t know where I stand with you, where I stand in this life. The sky isn’t just falling, it’s already fallen. I’m standing on a cruise ship that supports music I’ve always been taught was sinful. I wore a bathing suit today at the Bahamian beach. I’m pretty sure that I am one of your biggest disappointments. There’s so much pain “back there” in my life that I don’t want to go back – but I can’t seem to move forward into a new life where things that used to be wrong are now okay. God, this no man’s land is terrifying me, and I don’t even feel like I can turn to you – because all I feel is your displeasure.

And in his still, small voice, Jesus answered:

I know you are scared, but I won’t let you go. You aren’t “too far gone” for me. I’m still here. I haven’t gone anywhere. And I’m still loving you, holding you. I’m still calling out for you. Just be still and listen.

About two weeks prior, my friend and mentor Patti called me offering me an opportunity to go on an all-expenses paid cruise to the Bahamas. Premier Christian Cruises was offering free spots on the 2010 K-LOVE Family and Friends Music Tour to the ministry team leaders of Christian Military Wives, simply as a way to say thank you. I was the Newlywed Ministry Team leader for the organization, so I was one of the women who was offered a chance to go.

Not one to turn down a free cruise to the Bahamas, we took leave and went.

I felt like an impostor. Because not only had I never listend to K-LOVE before, I didn’t listen to contemporary Christian music at all. I didn’t even know any of the names of the bands that were going to be on the cruise! But there we were – on a music cruise for music we didn’t listen to.

My emotions that week were all over the place. I felt so happy and blessed to be there – to finally be able to meet my wonderful friend Patti, to be recognized publicly by the music “stars,” and just to have a free Caribbean vacation with my husband. (Um YEAH!)

But inside, I was conflicted. I had been taught that contemporary Christian music was wrong. Wordly. Fleshly. Too emotional. Weak in doctrine. Sinful.

And while I had come to the point where I had absolutely no problem blasting Josh Groban or Taylor Swift from my car speakers, my “spiritual music” was kept in a different box that still was wrapped tightly in the chains of legalism.

I know, I know. I was a walking contradiction. But it was a mental leap that I just couldn’t take – there were too many voices of condemnation swirling around in my head for me to make sense of how putting God alongside “the world’s music” could possibly be okay. I couldn’t understand how it could be okay for women in bikinis to sit poolside and sing praises to Jesus with Mandisa. I just couldn’t get it.

My husband and I ended up only attending 3 concerts, and only about the first 10 minutes of each, simply because his post-war anxiety couldn’t handle the noise in such a confined atmosphere. I was thankful that I had a “valid” excuse for skipping them.

There was guilt and unrest within me. I felt like a fish out of water, thinking “I don’t belong in this environment. God isn’t pleased with me.” One minute I was judging the people around me, and the next minute I was the one wearing the swimsuit and sundress on the beach and the spaghetti strap dress for dress-up night.

But then there were moments where God showed me so much grace. When Jenny Simmons of Addison Rose took my iPod and listened to a song that I had written. When my husband and I sat next to Jason from 33 Miles on a ferry and talked about life and God – when we played with his little boy and were just astonished at his humility and grace.

And then that moment of grace in the darkness, when God used one song at a late-night concert to remind me that I was loved and not so far gone that he didn’t love me anymore.

Once again, I find myself at a real loss as to what sort of conclusion to draw to this post.

That week on the K-LOVE cruise, I felt confusion and fear. I felt grace and love. There were far more questions asked than questions answered. Far more spiritual unrest than peace.

But God met me in the confusion. He spoke when I felt like I didn’t deserve to hear. His voice called to me from beyond the fear, the guilt, the shame, and the unanswered questions. 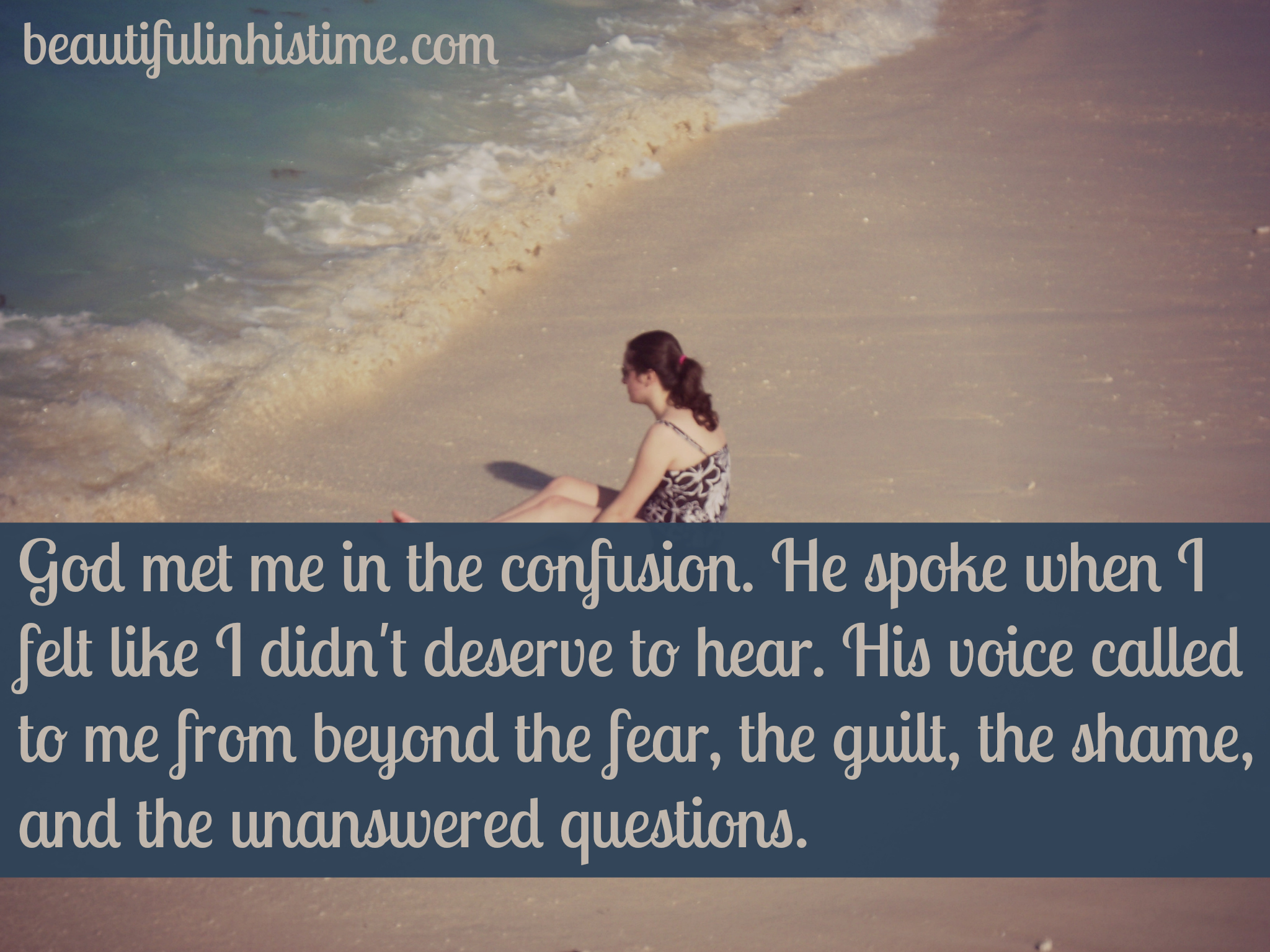 And those moments when he spoke, when I heard him calling, were ultimately more steps along the path that led me into his grace.

It would be a long time before I was comfortable listening to contemporary Christian music. It would be even longer before I would understand concepts like legalism, grace, and individual soul liberty.

Maybe right now you are on a “cruise ship” of your own that is tearing you apart emotionally and spiritually. Maybe you have stepped into a world that you used to judge and look down upon, but a world that somehow is bringing you closer to God. And you are confused, because that just doesn’t make sense to you. It doesn’t compute in a brain programmed to believe in a legalistic God.

Maybe you are vascillating between those amazing moments of clarity and peace where you feel God’s grace and love – and moments of such intense guilt, shame, and condemnation because you are sure that even your presence in such an environment is displeasing to God.

This isn’t a post where I give you all the answers of everything I know about grace. Because in my story, I simply wasn’t there yet.

This is a post where I leave your questions unanswered and your confusion untouched.

This is where I tell you that it’s okay to feel lost, confused, and scared. It’s okay to not have all the answers.

But if you listen, you can hear the voice of Jesus calling to you above all of the noise.