This post is part 10 in a blog series that I have entitled “the wilderness between legalism and grace,” in which I share how I came to realize that I had an incorrect view of God and self and how I became free of the system of legalism whereby I was trying to earn God’s favor. You can view all of the posts in the series here on the series landing page.

When Plan A doesn’t work out, sometimes you scrap it and go to Plan B, which is something totally different.

Other times, you just try Plan A – again, hoping for different results.

“If at first you don’t succeed – try try again.”

My plan A was Bible college, where I would meet a handsome man who had a heart for ministry – then we would get married and go into “full time Christian service” together.

Plan A didn’t work out. Neither did Plan B.

A part of me was hoping that if I “got my life back on track” and went back to a more conservative Bible college, I would get a second shot at my dreams. I had grand visions that there I would meet some handsome “preacher boy,” as God had renewed my faith that I was still worthy of love. And maybe if I was “good enough” I could still end up “in the ministry.” So, I got out the Baptist college directory and found College #3, an itty-bitty brand new college only in it’s 3rd year of existence.

(I think this is the point in the story where God just sits back, chuckles, and says “Oh, she doesn’t have a clue, does she?”)

I arrived on campus, unpacked my things, and went to the first getting-to-know you activity: a volleyball game.

During which I broke my foot.

I ended up with such a bad break that the doctors almost recommended surgery, but opted not to, letting me know that it would take me several months to heal. Six weeks in a cast, and probably til the end of the semester in a monstrous black comes-up-to-my-knee walking boot.

Not only was I the transfer student, I was now the girl with the broken foot. 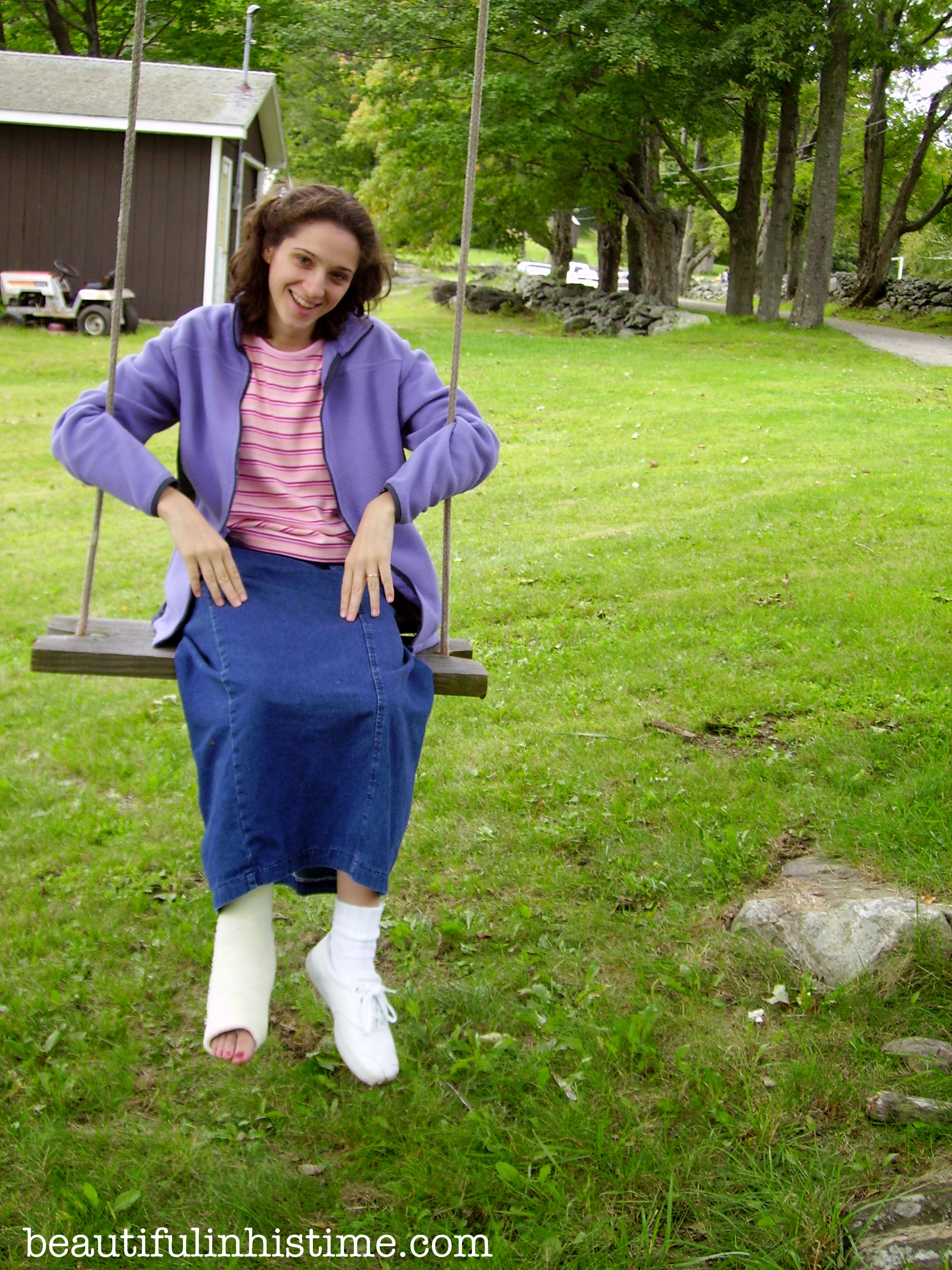 Walking around even the tiny campus on crutches proved to be exhausting, so someone in the church let me borrow a wheel chair. But it wasn’t your typical wheelchair. It was a chair – on 4 wheels. There were no big side wheels that I could push with your arms. The only way I could move myself was to “scoot” with my good foot. Or be pushed.

I’m still not sure which was more embarrassing.

College #3 was small, with a student body of approximately 30 students, 60% of whom were female. The boys honestly seemed scared of the girls, and me? I think they were terrified of me. (I think this is a natural by-product of very strict rules for male-female interaction that happens at almost every Bible college, but, I digress.)

Is it the cast, the wheel chair, or just the whole transfer-student thing?

I considered myself lucky if I could get a guy to open a door for me, let alone push me around to classes.

They finally did warm up to me, but within the first two weeks it became painfully obvious to me that none of these guys were what I would consider to be “husband material.”

Plan 2.0 was also failing me in the “getting my life back on track” department. During the last year I had caught a glimpse of the world outside of the clean, sterile bubble of “independent fundamental Baptist” Christianity. And it wasn’t as easy to simply hop back in the bubble as I thought it would be.

Since I’ve been here, I’ve realized that I am not the average girl. I think on a different plane – I question everything. Why do we do what we do? I see Scripture and God much differently than most people.

So, everything is still confusing. I know God wants me here, but I cannot say that I am yet happy and content. Maybe that’s sin. I don’t know. I ask God to fill my heart, but He hasn’t yet. Or maybe He’s tried and I’m just resisting. I don’t know…

Sometimes I would journal about rules I felt were silly, things I questioned, or conversations about super-spiritual actions that I felt were simply ridiculous. But I would feel guilt or confusion about my feelings:

November 11, 2006: Maybe I’m just an unspiritual idiot who God can never use in ministry, but when I hear these conversations, I just want to either laugh out loud or throw up.

And the one time I heard Making Memories of Us by Keith Urban at the doctor’s office?

October 27, 2007: I love that song. I still find myself confused about the music standards I have. That song is one of the mildest country songs I like, but it still has a backbeat and a sensual vocal part. Anyway, I still like the song!

I did my best to obey the rules, but didn’t worry too much about my attitude. I already knew that if I did get in trouble, it wouldn’t matter what my intentions were, they were only going to care about my actions. So I did my best to keep my head down and stay out of trouble. Inwardly, I craved freedom from all of the rules – but never would have admitted it to myself, let alone anyone else.

But there were moments when I listened to “unapproved” music on my computer on low volume when my roommates were gone.

And I decorated my bunk with pictures of my “pant-wearing, non-KJV-Bible reading, Josh-Groban-listening-to” friends and a fan picture of Il Divo. 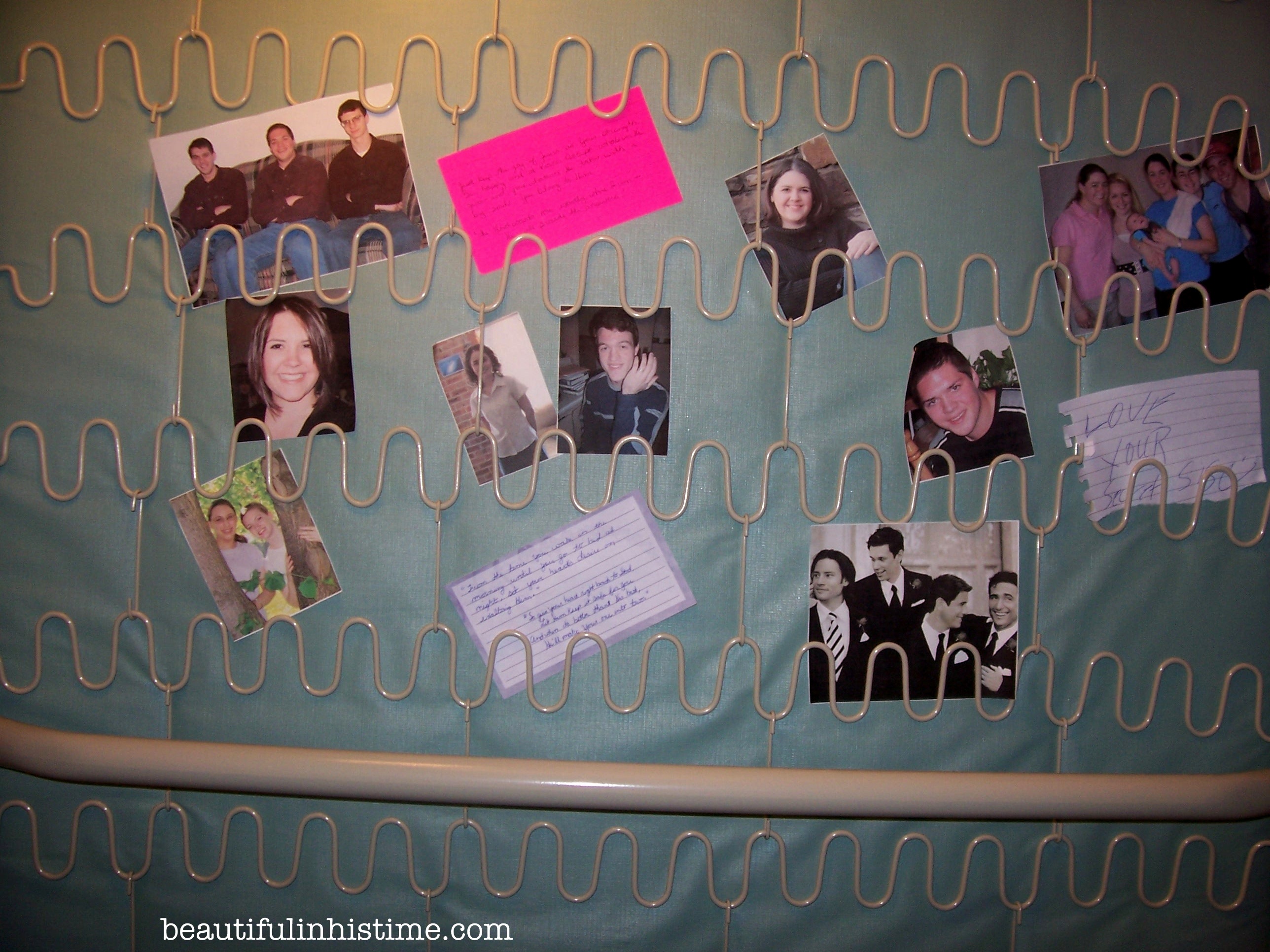 (This was my timid way of self-expression, and I felt so brave because of it!)

I lived for the 1 hour of allotted computer-lab time where I could chat with my online forum friends and message them about all of the rules that I thought were crazy. I even snuck online via wifi during study hour to instant message them on occasion.

Oh, what a rebel…

And I made new friends. Normal, fun college girlfriends. They were the “cool” girls – girls that a year before I would have shied away from because of their “looser” dress standards – yet they embraced me with kindness. They wore Victoria’s Secret Pink clothes in the dorm, and yet didn’t ostracize me for hiding in over-sized tops and frumpy skirts. They wrote me notes when I broke my foot and let me transfer their Josh Groban music to my computer. They let me try on their jeans (which I immediately took right off pretty much in horror!) and showed me how to straighten my hair.

And they listened to my story of heartbreak. They let me express my frustration. They got angry with me. And hugged me and told me it was gonna be okay.

College #3 is where I realized that I was probably never going to make it back to “the way things were” when I was in high school. I was never again going to be able to embrace the ideal of legalism wholly and completely. Too much of it just didn’t make sense anymore.

I began to realize that so many of the rules I had to follow were simply based in fear. The rules about male and female interaction were meant to protect these young people from even the slightest hint of immorality, all the while stripping them of their very humanity and instilling within young people a fear of the opposite sex. Rules about modesty were made to protect from lust, but made even the slightest bit of a female curve something to be feared, if not despised.

I just wasn’t having it anymore. And it was downright scary and confusing at times. I felt so lost. My eyes were now wide open to the ridiculousness of a system of rules that squashes every ounce of humanity to be “good enough” for God – yet at the very same time, I was terrified and guilt-ridden about embracing my own humanity. 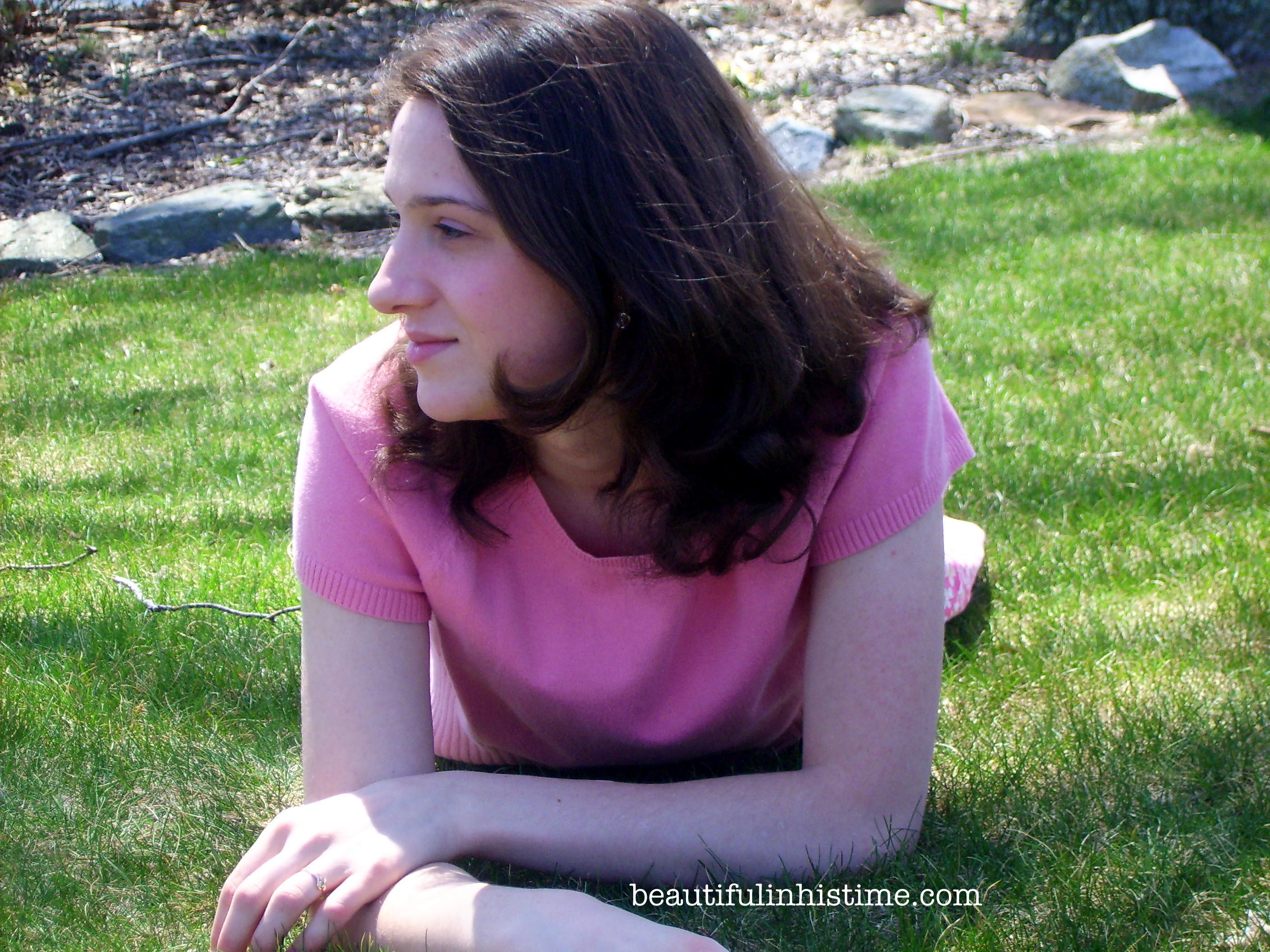 It was confusing…still believing in the ideal of being a “good Baptist girl” who followed her perfect husband into “full-time Christian service,” yet realizing that not only was it probably never going to happen, but that I wasn’t sure if I even wanted that life anymore.

I’m really struggling in how to bring this post to some conclusion. That’s the thing about this journey. It wasn’t easy. It wasn’t cut-and-dried. It was messy. It was confusing. It was hard. It was scary.

And sometimes, it still is.

What I’ve gone through has sort of been like God taking a square peg and shaving off the sides, sanding and polishing it until it’s round. It was painful, and there were some rough edges (ahem…still are).

It took me a long time to realize that I wasn’t going to be able to fit into the square hole anymore.

As I said in my last post – for me, these things took time. Give yourself the time for God to work and show you HIS path for your life. You don’t have to figure everything out today. Take one day at a time.

Maybe you are going through this right now. Maybe you are struggling and confused. Maybe you feel caught in two worlds but don’t feel at home in either. I would love to hear your thoughts in the comments!

Failed courtship: when you trust and obey but your heart still gets broken

Virginia Is For Lovers: Our Virginia Vacation

What motherhood taught me about legalistic Christianity