This post is part 6 in a blog series that I have entitled “the wilderness between legalism and grace,” in which I share how I came to realize that I had an incorrect view of God and self and how I became free of the system of legalism whereby I was trying to earn God’s favor. You can view all of the posts in the series here on the series landing page.

I walked across the dorm to the room where devotions were being held. This new college didn’t hold dorm devotions every night, which I felt probably meant that they were horribly “unspiritual”- and yet I still somehow always dreaded going. I hated being around these people that I didn’t know (and didn’t care to) at this school that I didn’t really want to be at, trying to hold back the tears and hide everything that was going on from these strangers.

I arrived in the room and plopped down on the floor – then I noticed the picture on one of the laptops sitting on the desk, which looked something, if not exactly, like this: 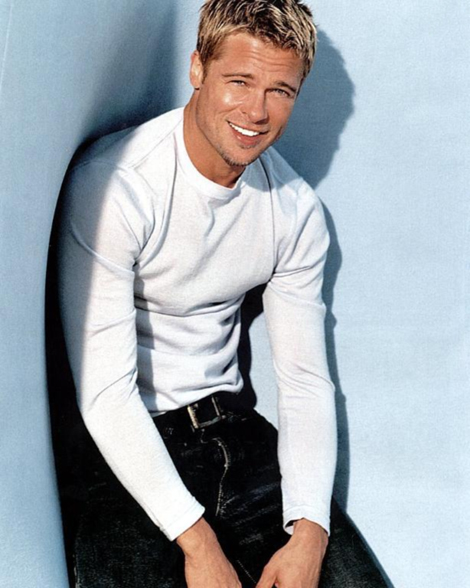 “Is that your boyfriend?” I asked the girl innocently…

If there were funny looks or snickers, I didn’t pick up on them. I just remember the short response:

I just shrugged in ignorance. I’d never heard of the guy.

Her name was Tara and she was the fun, short, quirky girl who bunked beneath me. The one who changed her hair color every few weeks and made me laugh.

Tara was the girl who introduced me to Josh Groban.

When I informed her, no, I hadn’t, she started gushing about this amazing singer and his amazing voice, and broke out her favorite CD. She popped it in, turned the volume all the way up, and skipped to track-Remember-When-It-Rained. She sang and danced and swooned with freedom to the music.

I just stood there in a sort of shock. I was waiting for someone to break down the dorm room door and kick us out. Music like this just didn’t fly where I had come from. It made me uncomfortable. I couldn’t figure out what the song was about, but I had to admit it was beautiful. I envied her and her freedom to enjoy such beautiful music without a thought of concern for the “rock beat” attached to it.

Same dorm room, same incredulous questioning, same gushing – only this time it was my roommate Meg and she was going on about this movie.

“You mean you’ve NEVER watched Sleepless in Seattle? There’s like this scene and they are watching an Affair to Remember, (have you seen that movie?) and she’s eating popcorn and she cries “And all I could say was hello!’ It’s the best movie ever! YOU HAVE TO SEE IT!”

I smiled and nodded as though I was listening to someone speak a foreign language but pretending I knew exactly what they were talking about… I felt so lost.

Attending College #2 was an experience. The rules were laxer. Girls could wear pants on campus (although I most certainly didn’t). Dating couples could meet off campus, alone, as long as they drove separately. You could listen to Josh Groban in the dorms, and we even watched the Winter Olympics on the TV that the dorm supervisor was allowed to have in her room.

It was a weird stage of my life for me. Internally I compared everything to College #1 (best) and judged College #2 (sub-rate) for being so…”unspiritual.”

But over time, I cried less and relaxed more. I laughed. I made a few friends. I stopped looking over my shoulder constantly afraid that I was going to get in trouble with the administration. And I may or may not have broken my toe mattress surfing and sliding down the banisters in the stairwells of the dorms.

College #2 was still a good, conservative BAPTIST college, but it was a slightly different “flavor” than what I was used to. And in many ways, I felt like I had stepped into a whole new world.

Legalism can be isolating. When “separation from the world” is elevated to be the most important thing a Christian can do, and that separation is taken to extremes, the Christian can lose touch with the reality of his humanity and the world that he lives in. <—tweet this!

Growing up without a TV, never going to the movies, being terrified (literally) of rock music, and only having friends at my church – I lived in a clean, sterile little bubble of Christian goodness. It was safe, floating above the world – because I couldn’t touch them and they couldn’t touch me. And I was happy in the bubble. Very happy. 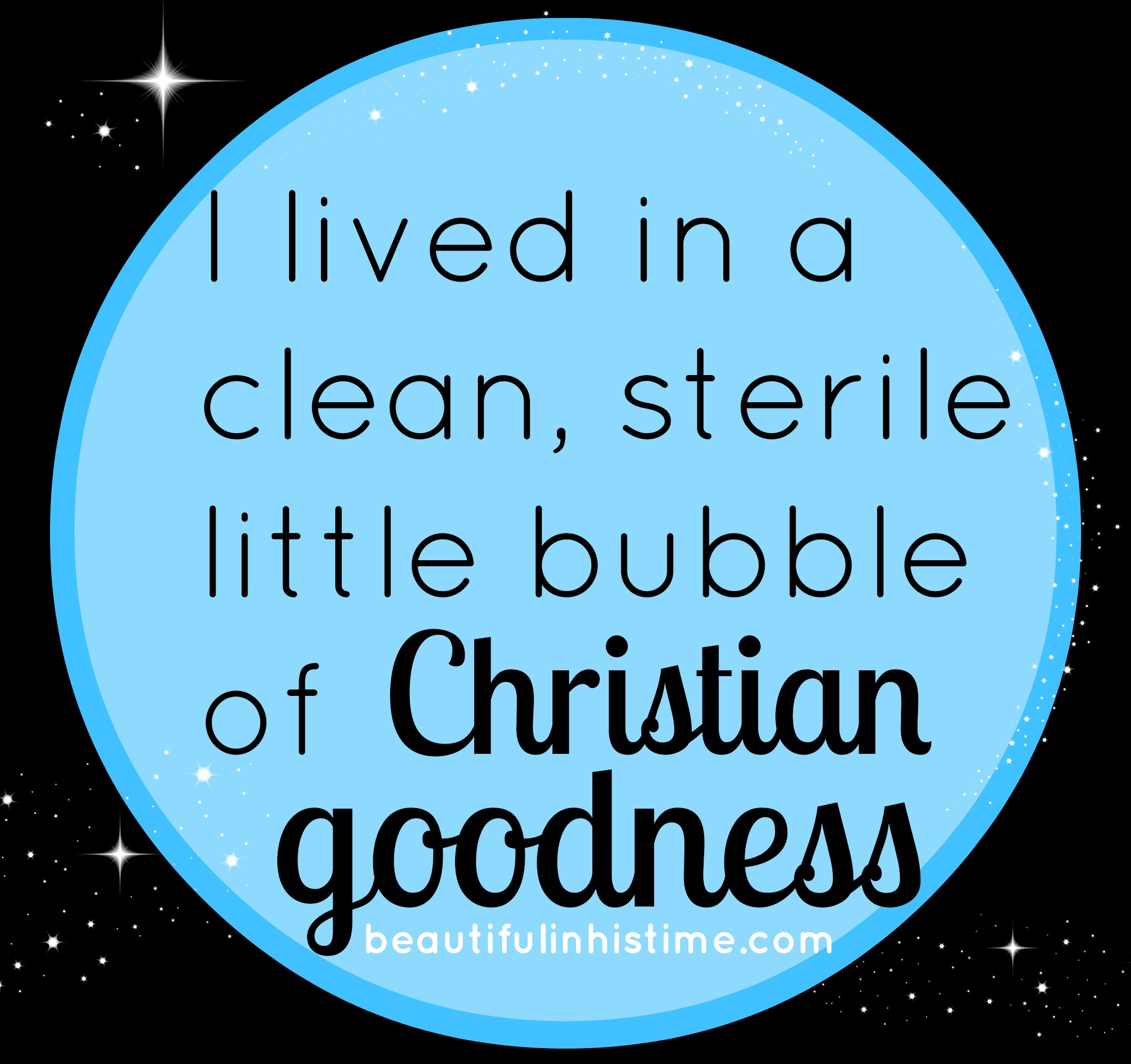 Then the bubble popped, or I no longer felt good enough to be in my own bubble of Christianity – I felt forced out. It was scary. I wanted to be back in the bubble, away from all of this worldliness. And yet there was a freedom of movement when I was no longer in the bubble – a freedom to touch the world and have it be okay.

I was beginning to realize that life is really, really messy. You can hide in a bubble, but eventually the mess will get you. As great at it sounds to be “in the world but not of the world,” you can’t be in the world without touching the world.

Being in the world means sometimes you will get your hands dirty.

Being in the world means sometimes you have to keep up with current culture and trends or you will simply be a joke – completely unable to understand, let alone reach, those around you.

God gave us humanity, and it is a gift. He knows we will fail him and our humanity will be our downfall. He knows that being holy like him, keeping the entirety of his law, is impossible. In fact, the reason he gave us law was to show us this very fact.

Then he gave us grace.

When I was in high-school, I used to get physically sick to my stomach with guilt after I had watched a movie where an unmarried couple so much as kissed, thinking I was “setting [a] wicked thing before mine eyes.”

But Jesus ate with prostitutes.

He spent more time with the sinners than the saints. And I think that if Jesus had been living in 2006, he would have known who Brad Pitt was. <—tweet this!

Before the end of the semester I had watched both An Affair to Remember and Sleepless in Seattle, and by the end of that summer I was in love with the music of Il Divo and Josh Groban. Two years later I would watch my first Brad Pitt movie.

I had started feeling a lot more human, more real.

This is one area of Christian living and grace that I don’t have all figured out, so please don’t look to me as any sort of stellar example of the perfect balance between holiness and God’s liberating grace.

But can we Christians stop for a moment at look outside our perfect little bubbles? Can we see what Christ did? Can we take notice of the fact that he seemed to relate better to the sinner and denounced the actions of the white-washed, commandment-keeping, separated-from-sin Pharisees? Can we stop being afraid to touch the world that God gave us to live in? Can we just take a deep breath, relax, and embrace our humanity?

I would love to hear from you on this one! How have you been affected by living in your little bubble of Christianity? How have you learned to relax and be okay with touching the world, while still recognizing that you are a child of God?

Easter Grace: how God shows up in jelly beans and covers my mistakes

Grace: How a Recovering Legalist Moves Forward in Faith